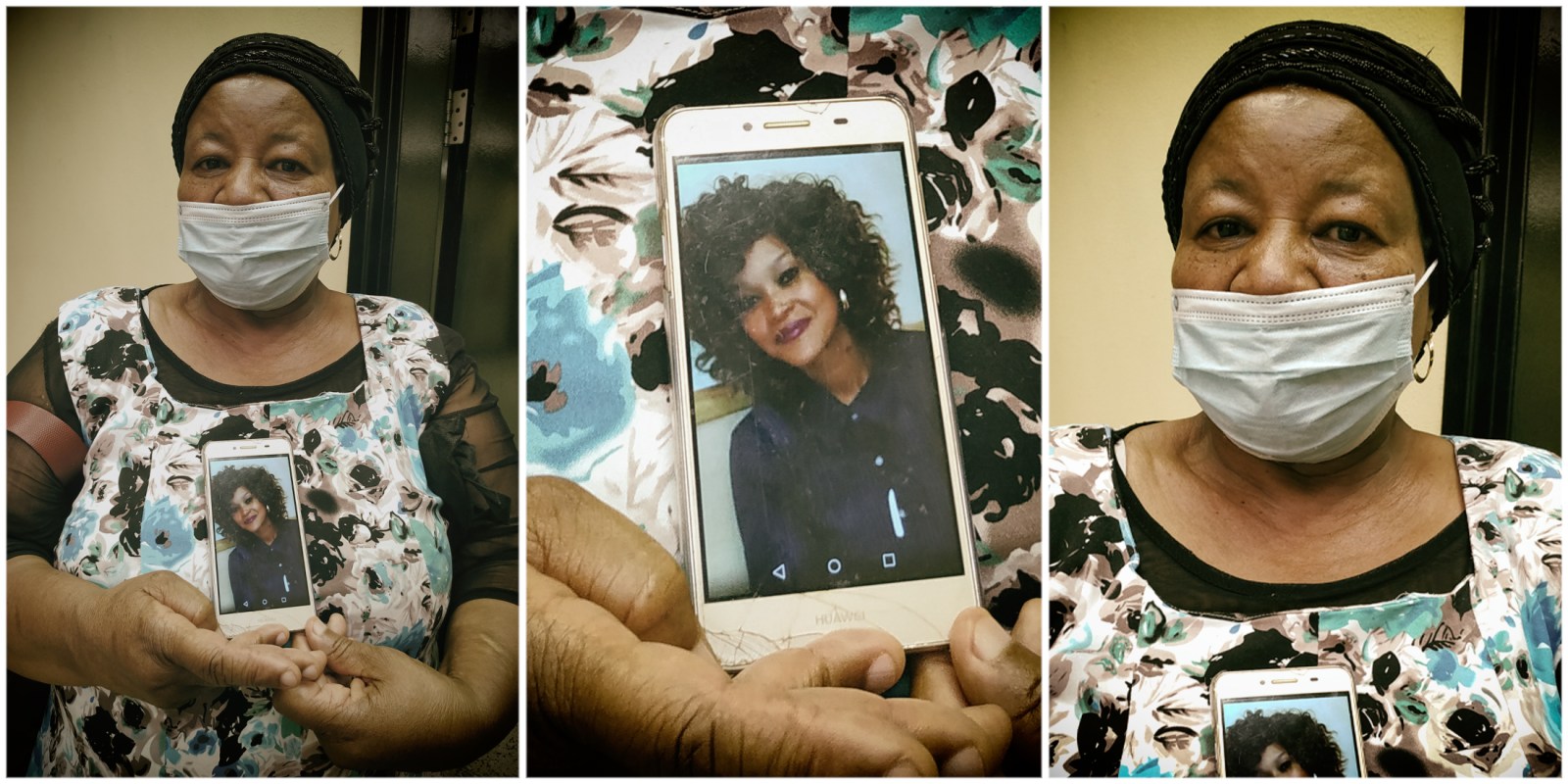 Ruth Mgaki stands outside court 2D of the Johannesburg High Court with a picture of her daughter Dimpho Mohau. She had just heard that Vuzi Mjoli, accused of killing her, had been found guilty of murder. (Photo: Shaun Smillie)

The trend in South African courts of charging men accused of femicide of culpable homicide or even lesser charges could be coming to an end.

As Vusi Mjoli turned in the dock to walk down the stairs to the holding cells below, his eyes hardened and he tried to stare down anyone who glanced his way.

But what Mjoli was really staring at was the possibility of life in prison.

Earlier on Monday 30 November, when he had stepped into the dock in Court 2D of the Johannesburg High Court, there was a chance he might be convicted on a lesser charge of culpable homicide for killing his ex-girlfriend Dimpho Mohau.

There has been a trend in South African courts to charge men accused of femicide of culpable homicide or even lesser charges. Culpable homicide is the same charge motorists face when they unintentionally kill a pedestrian on the road. Sometimes all an offender gets is a fine.

But Judge Majake Mabesele on Monday found that Mjoli’s actions on the day he viciously assaulted Mohau amounted to murder.

The charges relate to two crimes, which occurred in 2018, and in February this year.

On Thursday Mabesele had left the high court to decide whether he would find Mjoli guilty of culpable homicide or of murder.

That day the court heard how, a week before her murder, Mohau had fled Mjoli’s house and gone into hiding. A friend, Dumisani Dlamini, had let her stay at his house in Soweto.

But a week later, Mjoli found her and persuaded her to leave with him.

Witnesses described how, later that day, while they were drinking at Mjoli’s house in Senaoane, Soweto, Mjoli began assaulting Mohau. After intervening and calming him down, they left to buy more alcohol.

When they returned they found Mjoli kicking his ex-girlfriend, who was on the floor. Mohau’s body was found several days later wrapped in a duvet under a bed in Mjoli’s house. Mjoli went on the run and was arrested two days later.

The kicking, a postmortem revealed, led to Mohau’s death.

Witnesses said that after Mjoli had kicked Mohau, she sat on the sofa and continued drinking.

The doctor who examined her described severe injuries which led to her death from multiple rib fractures. The manner in which the ribs were fractured suggested the maximum amount of force was used, which resulted in the deceased experiencing difficulty in breathing and dying from blunt-force chest trauma.

This initially suggested to the judge that Mjoli had not set out to kill her.

But in his judgment on Monday, the judge made his decision based on Mjoli’s actions on the day of the deadly assault.

“The doctor who examined her described severe injuries which led to her death from multiple rib fractures. The manner in which the ribs were fractured suggested the maximum amount of force was used, which resulted in the deceased experiencing difficulty in breathing and dying from blunt-force chest trauma,” Mabesele read in his judgment.

Mabesele was also damning of the police’s investigation in 2018 after Mjoli kidnapped and raped Mohau. He stated that he would be sending a copy of the judgment to IPID, the body that provides oversight over the SAPS.

The court had heard how Mjoli on January 8 2018 kidnapped Mohau outside the Bree Street taxi rank, with the help of two friends. They bundled her into a yellow minibus and were driven to Mjoli’s home, where Mjoli raped her.

Mohau went to the Moroka Police Station and gave a statement and opened a case. She was given a medical examination, which showed that she had been assaulted and raped. The investigating officer instructed Mohau to locate her ex-boyfriend and then phone the SAPS, so the police could make an arrest.

On February 14 2018, Mohau submitted a statement in which she withdrew her charges against Mjoli. In the statement she said: “Once he can get bail, he will hunt me and he will kill me. I know him very well, he is evil and I am so scared of him.”

The investigating officer handed the withdrawal statement to a junior prosecutor, but nothing was done.

“The conduct of the investigating officer is unacceptable, regrettable and amounts to dereliction of duty. Police officers are expected to serve the public diligently and investigate cases brought to them without considering the status of the person or the persons who lay the charge or charges at a police station. In short, the police must treat the rich and the poor equally,” Mabesele said. The judge’s finding comes during the 16 Days of Activism for No Violence Against Women and Children campaign.

She [Mohau] was highly decomposed, there were maggots on the body because of the number of days the body had stayed in the house and the heat during that period as well. The deceased’s mother could not even pay her last respects. The pain will never heal.

Gender activist Lisa Vetten said that research had shown that men convicted of femicide often were given lesser sentences of either assault with intent to cause grievous bodily harm or culpable homicide.

“These cases range from anything like the man who kept a plank with the word pyn [pain] written on it which he could beat her with. And that was culpable homicide, because he just meant to hit her. There are men who beat their wives with chains, who become surprised that that killed them,” she said. “In some of these cases, the men just got months.”

Vetten added that this is a piece of law that is gendered and needs to change.

“So, it is very nice to see the judge stick his neck out and do something.”

On Tuesday Mjoli is likely to hear his fate. The prosecutor, Valencia Dube, is pushing for a life sentence. In argument she stressed how Mohau’s mother, Ruth Mgaki, had lost her only daughter to a gruesome murder.

“The pain one could draw from her testimony. She [Mohau] was highly decomposed, there were maggots on the body because of the number of days the body had stayed in the house and the heat during that period as well. The deceased’s mother could not even pay her last respects. The pain will never heal,” she said.

Outside the courtroom, Mgaki welcomed the judgment.

“He must just go, nothing else. He has done a lot,” she said.

Mgaki still tries to make sense of why her daughter remained with Mjoli, even though it was clear that he was beating her. He even got her to leave her job. “I think he was jealous of her, he didn’t want to lose her to someone,” she said.

After the rape, Mohau moved back with Mjoli and in those last two years of her life her mother hardly saw her. A last memory she has of her daughter is of her laughing.

“I went to see her, but I waited outside and I asked someone to call her and she came,” remembered Mgaki.

“I told her that I had come to see if she is okay. And she said, ‘Why, Mama?’ And I said, ‘Because I know you are a punching bag’, and she just laughed.” DM