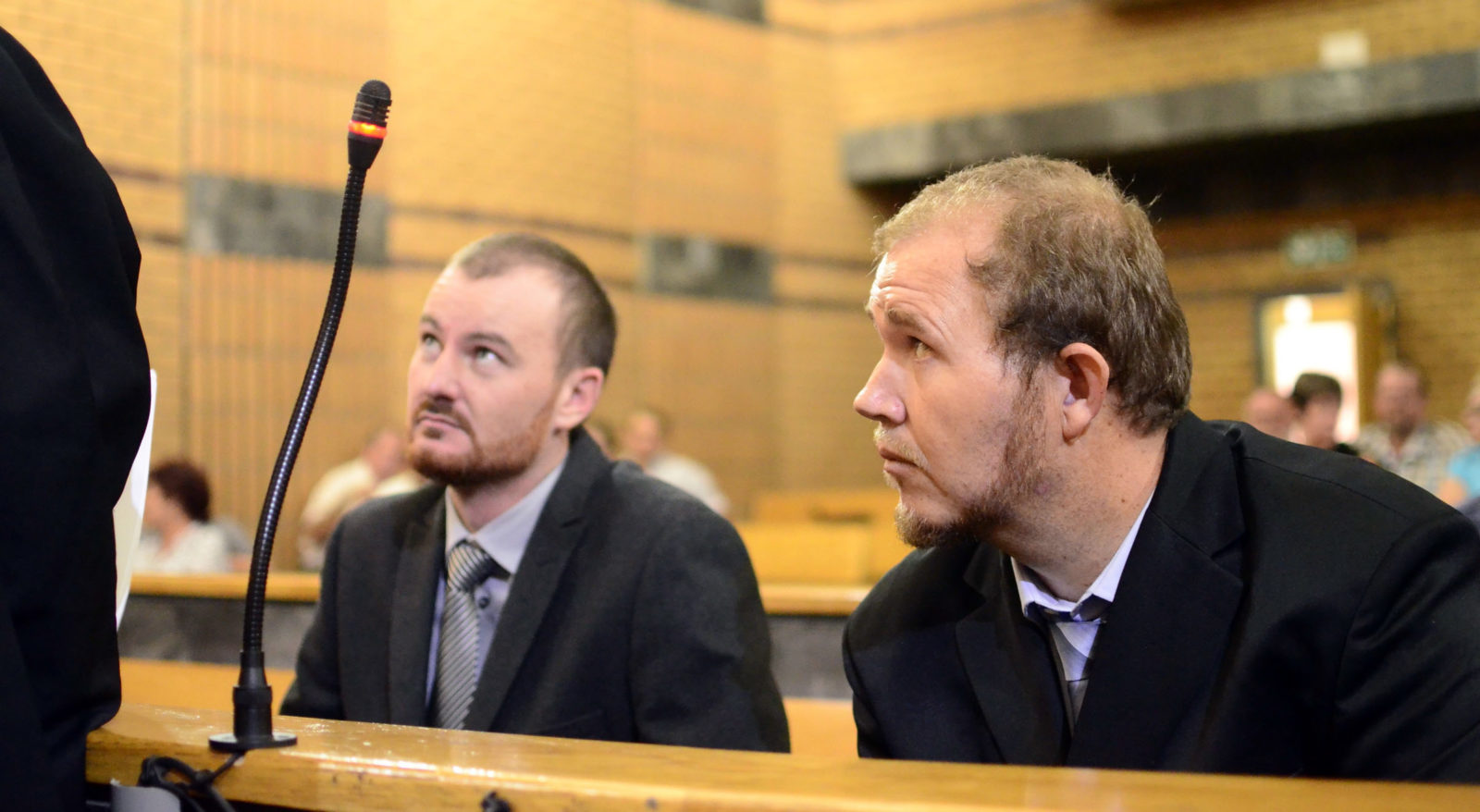 Last week the Supreme Court of Appeal reversed a decision of the High Court and acquitted Pieter Doorewaard and Philip Schutte of the murder of 15-year-old Mathlomola Jonas Mosweu near the town of Coligny. The judges (in three separate judgments) all agreed that the police botched the investigation. But the judgment remained silent on the impact that racial attitudes in the town (including attitudes of white superiority) may have had on the way the matter played out.

If you read the Afrikaans newspaper Rapport this past Sunday, you might well be convinced that Pieter Doorewaard and Philip Schutte were victims of a grave injustice, framed by the police, the prosecution and a High Court judge for the murder of a 15-year-old black child. If you are an acolyte of Gauteng MEC Panyazi Lesufi, you may believe that the two white farmers are indeed guilty of murdering Mathlomola Jonas Mosweu, and that the SCA judgment was a travesty of justice inspired by judicial racism.

However, if you actually read the SCA judgment (which, evidently, few of those who have commented on the case have done), you may be left with more questions than answers. You might also be left wondering to what extent life in the town of Coligny is still structured according to the logic of apartheid and what role that played in the matter.

What we do know is that the 15-year-old Mathlomola Mosweu died after being “arrested” by two farmers for allegedly stealing sunflowers worth about R60. The farmers claimed that, after apprehending him, they transported Mosweu on the back of a bakkie to the police station, but that he jumped from the moving bakkie and died as a result. (His death was ascribed to “blunt force trauma”.) The state alleged that the farmers threw the deceased from the back of the moving bakkie. The state based its case almost exclusively on the evidence of one eyewitness, whose evidence turned out to be unreliable and contradictory.

The SCA found that the state had not proven its case beyond reasonable doubt. In our law, the evidence from a single witness can only sustain a conviction if it meets certain requirements. Honesty alone is not sufficient. The witness must also be reliable.

The evidence of the single witness in this case was not reliable, not least because the witness first stated that the deceased was thrown from the bakkie three times, only to later retract this and to say he was only thrown off the bakkie once. (In the judgment of Ponnan JA, he goes as far as stating that “his evidence has been deliberately fabricated”, but the majority declined to endorse this view.)

To make matters worse, the police failed to gather any other evidence that may or may not have corroborated the evidence of the single witness. It even transpired that the police had forensic analysis done on a bakkie (several days after the incident) without establishing whether the bakkie was the one used in the incident.

The police also seemed at first to show inordinate deference to the suspects in the case. As Judge Molemela points out in his judgment, when the two accused refused to go back to the scene of the accident as required by the relevant legislation, the investigating officer “did absolutely nothing about that”. And contrary “to basic police procedures”, the investigating officer failed to obtain a written statement from one of the accused who drove the vehicle and failed to open a docket on the alleged accident. It was only the violent reaction of community members that triggered the opening of a docket.

“After taking down a statement implicating the appellants in murder and other serious charges, [the police investigator] did not inspect the scene of the crime and record his observations. Instead, the scene was visited days after the incident, and only after the intervention of senior officers.”

Where does that leave us in trying to understand what really happened in this case? In my view, the court cannot be faulted for acquitting the accused of murder because the state simply did not present sufficient evidence to convict them. What we do not know (and now cannot know) is whether the State’s case would have been stronger if the police had not completely bungled the investigation.

While some have relied on the acquittal to back up their strongly held view that the two accused were the victims of a grave injustice, with the trial judge as the main culprit, this is not a finding explicitly made in any of the judgments. On the contrary, two of the three judges had reservations about the version of events presented by the accused, casting doubt on what really happened that day. In a pivotal passage, Ledwaba AJA found that:

“The appellants’ version regarding how the deceased apparently vanished from the vehicle is not satisfactory. However, even assuming as correct [the single witness’s] testimony, all that was mentioned was the boy’s injuries and the fact that Mr Doorewaard was the driver and the onus remains on the State to prove its case beyond a reasonable doubt.”

In other words, the judge was not satisfied that the accused’s version of what happened was true. But not being satisfied by the version of events offered by the accused in a criminal trial is not sufficient to convict the accused of a crime. For a court to convict, the state must present credible evidence of the guilt of the accused, something it seemed to have failed to do so in this case.

In the light of these reservations about the version of events offered by the accused, it is not clear to me that Pieter Doorewaard and Philip Schutte were necessarily the victims of an injustice (except in the narrow legal sense that any conviction overturned on appeal would constitute an injustice). This view is strengthened by the fact that Molemela JA, in a minority judgment, held that the accused should have been convicted of culpable homicide, for negligently causing the death of Mathlomola Mosweu, the one person who certainly was a victim in this case.

At the very least, the fact that the accused left the seriously injured boy on the side of the road, instead of taking him to the hospital, and did not attempt to provide any medical assistance to the victim, suggests a callous disregard for the life of a black youngster. What kind of person does that? While Ponnan JA (in a third judgment) accepted the accused’s excuse that they did not believe that it was safe in the circumstances to transport him to the clinic, Ponnan JA had no answer to the observation of Molemela AJ that:

“I find it quite shocking that from the police station, the two appellants went back to their workshop and continued about their daily farming activities as if nothing exceptional had happened. Despite their awareness about the serious nature of the deceased’s injuries, none of them later bothered to find out what had ultimately transpired. I do appreciate that this morally reprehensible conduct has no bearing on the inferences that may be drawn in relation to the crime committed.”

Apart from the shocking and perhaps wilful incompetence of the police, what struck me most when reading the judgment was what it revealed about the racial hierarchy in Coligny. The two accused testified that they often “arrested” young black men and brought them to the police, who welcomed this. Their authority to do so had never been questioned until their arrest.

Moreover, for the accused it was unthinkable that any black teenager would even consider defying their authority by trying to escape. It was also perfectly normal for the accused to refuse to accompany the police back to the scene of the youngster’s death. This was just the way that things worked in Coligny.

To understand why this suggests that Coligny is still structured according to the logic of apartheid, imagine what would have happened if the accused were black and the victim white. Imagine it had been two black men in a bakkie who had “arrested” one of the white teenage sons of Doorewaard or Philip Schutte for stealing fruit from a black neighbours’ yard. Imagine the boy had somehow died in peculiar circumstances while in the custody of these two black men, and that the two men had not assisted the dying boy or taken him to the hospital or clinic. Imagine the two men had refused to cooperate with the police as required by law and had been allowed by the police to go back to their homes in an informal settlement with apparently no care in the world for the well-being of the white child who died in their custody.

The problem is, of course, that it is difficult to imagine that this could ever have happened in a town like Coligny. If two black men had “arrested” a white teenager, the police may well have treated this as a kidnapping, because the logic of apartheid dictates that black men can never have authority over white children.

The child would probably have resisted the “arrest” because he would not have acknowledged the authority of the two black men – although he would likely also have been scared to death. The police would likely have sprung into action because a white child had been killed, because white lives matter for the police. The police would have forced the two black men to accompany them back to the scene of the child’s death, and it is not far-fetched to imagine that they would have arrested the two men for the killing of the child.

None of this has a direct bearing on whether the accused in this case should have been convicted by the High Court, or whether they should have been acquitted on appeal. But I would argue that it should influence how we interpret the events surrounding the conviction, and later the acquittal, of the two accused. This would force us to ask difficult questions about what justice might look like in a profoundly unjust environment.

It should also give us pause, and make us hesitant to rush to judgment about the exact nature of the injustice that had occurred in this case. DM