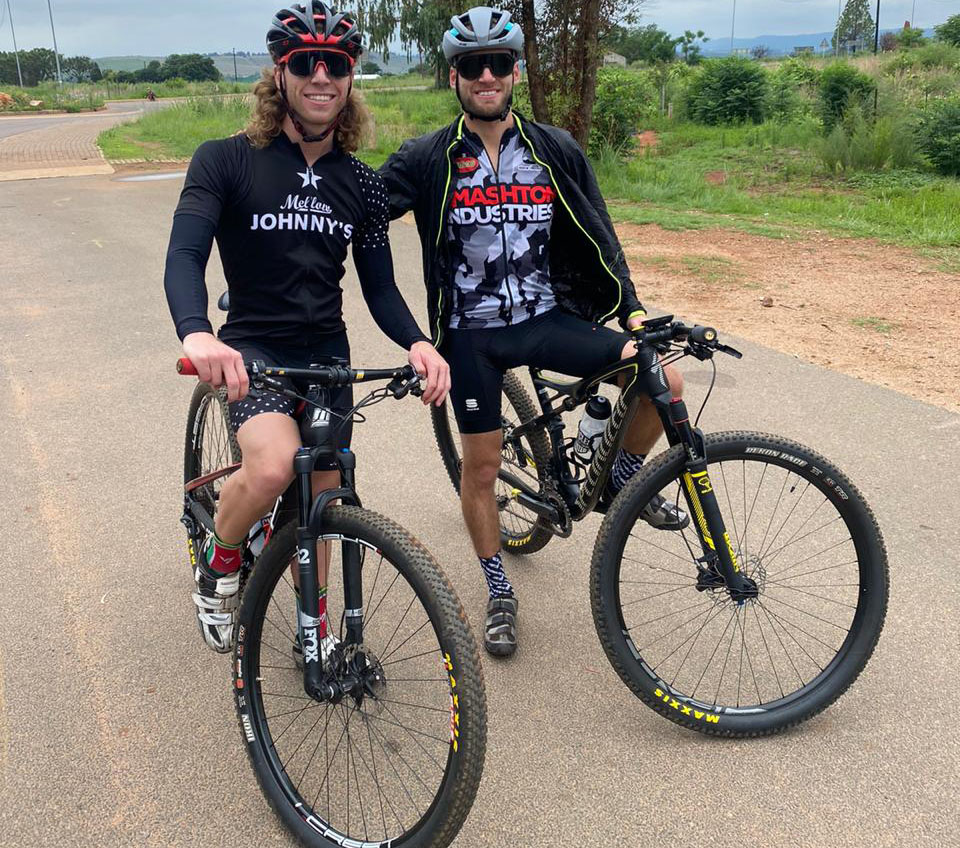 Darryn Binder (left) and Brad Binder (right) are taking on a new two-wheel challenge at the sani2c MTB race in KZN this week. Picture: Supplied

Recently crowned MotoGP Rookie of the Year, South Africa’s Brad Binder will challenge himself on a different set of two wheels when he tackles the sani2c mountain bike race this week.

After a stunning debut season in motorcycling’s premier class, which saw him win the Czech Grand Prix at Brno in August, one of the ways Brad Binder plans to stay fit in the off season is on his mountain bike.

Along with brother Darryn, who had a strong season in Moto3 on the global motorcycling circuit, Brad will tackle the three-day sani2c MTB race in KwaZulu-Natal. The route takes riders 265km from Underberg to Scottburgh on KZN’s South Coast.

The Binders are keen mountain bikers and when they’re not scorching the world’s racing circuits on their KTM motorcycles, they can be found riding MTB trails near their home in Krugersdorp on Johannesburg’s West Rand.

The sani2c race is split into two divisions – “The Race” for elite riders and the “Adventure Race” for non-professionals such as Brad and Darryn.

“Sani2c is something I have always had a plan to do. I was so fortunate that I was able to come home a week earlier than originally planned and will do it with some mates,” Brad said this week.

“It’s the first time I am doing a stage race on a mountain bike, or any bike in general, so it should be super cool,” Brad said.

“For training for the MotoGP, we do a lot of cycling. We live in Spain during the season so we do a lot of road cycling there, but not a lot of mountain biking.

“But when I come to South Africa I only ride my mountain bike. I am really looking forward to it… it should be a lot of fun. I am sure it will be a challenge.”

A stage race is also a first for Darryn: “I’ve always been keen to try a mountain bike stage race. I haven’t ever done anything like this before,” he said.

“I am super keen and am really looking forward to it. We do a lot of cycling for training, but this is going to be my first time doing three days of quite big mileage in a row.”

Big seasons for the Binders

As debut seasons in MotoGP go, Brad Binder had a blinder.

The South African won his third race in the sport’s elite division – the Czech MotoGP in Brno in August – after the Covid-delayed season finally got off the line.

It was a dream start for the 2016 Moto3 world champion and it announced his and Red Bull KTM factory racing’s arrival in the premier class.

It was also the first time a rookie in MotoGP won a race in his debut season since Marc Marquez in 2013. Marquez has subsequently gone on to win six MotoGP titles.

For Darryn, his fourth season in Moto3 saw him finish in eighth on the standings – his best so far.

He also won his first race – the Spanish Grand Prix at Jerez – and is starting to fulfil his enormous potential.

Brad Binder’s Czech win was also the first for the Red Bull KTM factory team in the sport’s premier class. They delivered earlier than promised when they entered the elite class in the sport in 2016.

KTM set a goal of winning races within five years, but that was before they fully realised what a talent they had in Binder, who rode a KTM all through his formative years in Moto3 and Moto2.

A week after his breakthrough victory, Brad glided into fourth in Austria, making the sport look easy in his first few weeks of mixing it with more seasoned riders.

But his season levelled out and it wasn’t until the final race of the season in Portugal that Brad managed to earn a place in the top five again, after some frustrating rides throughout the season.

It’s only because he made such a blistering start to MotoGP in his rookie campaign that his overall results felt underwhelming after that victory in Brno. His results were, in fact, where he should be as he learned to handle a 300 horsepower bike on tracks where he has pushed only smaller machines to their limits.

One of his major issues in finding consistency was the inability to qualify high on the grid.

Brad’s best qualifying was sixth and that immediately put him on the defensive. But his Sunday pace was routinely fast. The problem was, starting further back meant he had to fight in the pack, which is a recipe for mishaps.

“It would be great to qualify better, but the thing is there is so much to learn when you come to a new circuit on a MotoGP bike.

“Generally, I’ve only done about 40 laps of a track before I’ve got to do what we call a ‘time attack’ to get through to Q2. Most of my competitors have been coming to these tracks, on these bikes, for the last five or six years, so you have to do a lot of catching up. It just takes a bit of time.

“Normally by race day on Sunday I’ve made a big step forward in terms of pace, but by then it’s too late. We have to do work on my qualifying for sure, but it will come naturally as time goes by and I have more experience [in] MotoGP.

“My season was up and down this year. I had some really, really good days and some really bad ones,” Brad said. “I think it’s expected in my rookie year.

“I am very glad to be back in South Africa… It will be an awesome off season. I am now just trying to enjoy myself and have some fun and do some different things.

“Hopefully in February, I will be in good shape and ready for a new season.” DM