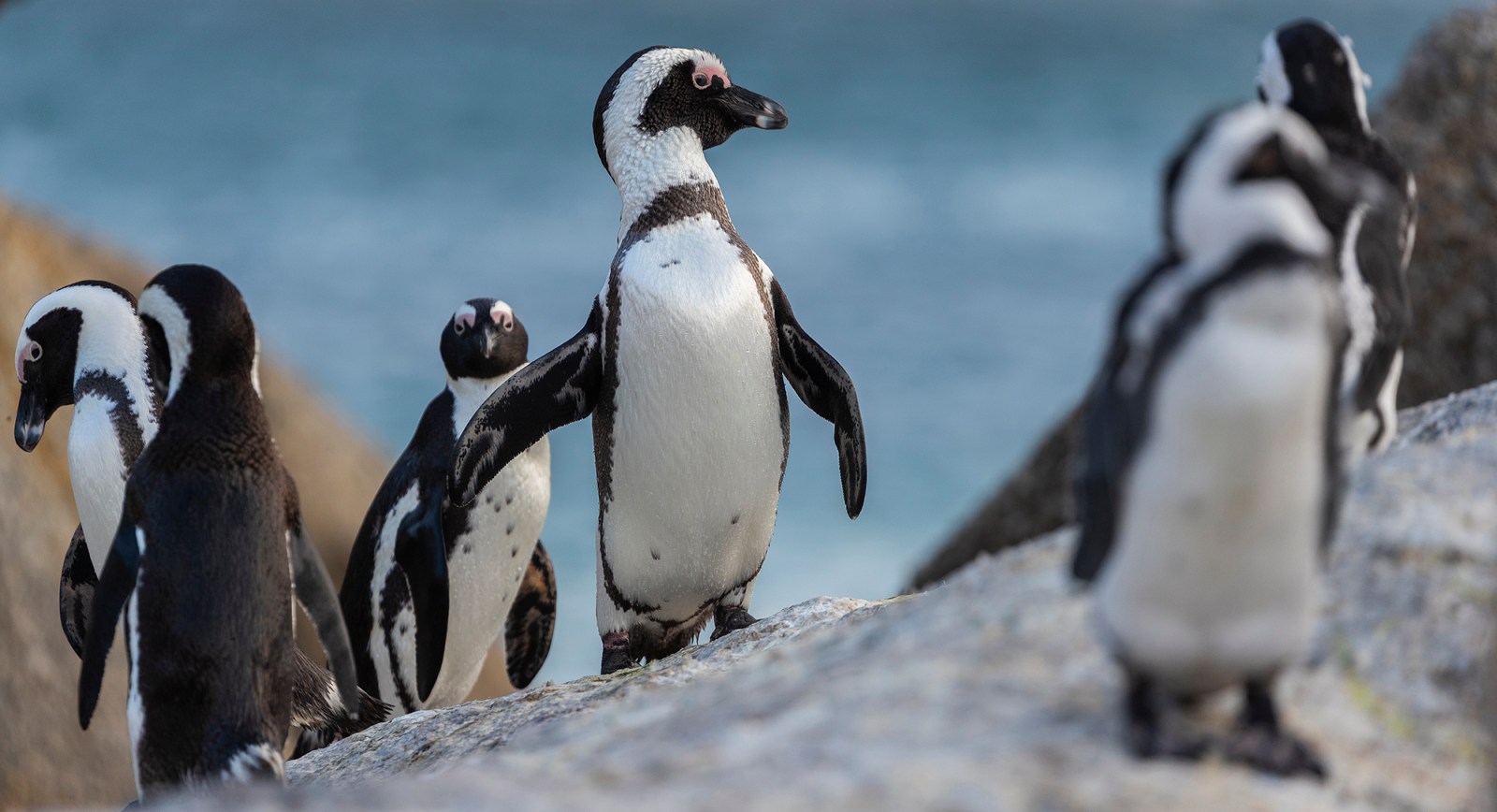 The science is clear: the African penguin is likely to be functionally extinct on the west coast in less than 15 years, unless we take immediate action.

There’s a magical moment of transition when a penguin crosses from land to water. Earth-bound, they are slow and cumbersome; as soon as they enter the ocean, they become sleek and agile, diving with torpedo precision to forage for life-sustaining fish. That is, assuming there are fish to be had.

Last week I drove out to Stony Point near Hermanus to assist the Southern African Foundation for the Conservation of Coastal Birds (Sanccob) with a release of rehabilitated African penguins. As I opened one box and watched its eager occupant waddle towards the water, fat and glossy with good health, I was struck by the difference between him and some of the resident birds.

I heard the despair in Sanccob marine scientist Lauren Waller’s voice as she pointed out birds that likely wouldn’t make it through the next few days. I’ve visited penguin colonies all over the southern hemisphere, but until now, I’ve never seen a starving penguin. It was eerily reminiscent of the malnourished polar bears I’ve seen in the north.

Many of these wild penguins were moulting – something penguins do every year. The birds stay ashore for up to 21 days to shed and regrow their protective feathers. Because they can’t swim during their moult, they need to eat plenty before they come ashore to make it through their fast. These birds should have been at their fattest, but a good number of them were seriously emaciated, their breastbones pointing through their feathers when they fanned their wings.

The resources in our oceans are not endless, and they are no longer abundant, thanks to the combined threats of global warming, pollution and industrial overfishing. Standing on that rocky shoreline it became clear to me how acutely the African penguin is feeling these changes.

Some of these birds may have swum hundreds of kilometres to find food. Marine researchers from BirdLife South Africa recently discovered premoulting penguins from Dassen Island turning up in De Hoop nature reserve some 350km away. Swimming such a long distance around Cape Point is not the best strategy when you’re trying to put on weight, but these birds have no choice.

The science is clear: the African penguin is likely to be functionally extinct on the west coast in less than 15 years, unless we take immediate action. Functionally extinct means that a population has declined to the point where it is no longer viable and can no longer produce a new generation.

When surveys began in the early 1900s there were three million African penguins. Since then we have lost 95% of the population, and their numbers continue to drop. In 2000, there were an estimated 53,000. Today, there are just 17,700 breeding pairs.

They are now more vulnerable than the white rhino, the polar bear or the giant panda.

If the situation wasn’t dire enough on the west coast, a new threat has emerged on the east coast, with offshore fuel ship-to-ship bunkering in Algoa Bay, close to the largest remaining African penguin colony at St Croix Island. The inherently risky operation of transferring fuel from one vessel to another at sea has already resulted in two oil spills.

We are now at the point where every bird counts. Conservation agencies are doing everything they can to protect this iconic species.

Three crucial actions from our government could make all the difference to the African penguin’s survival:

It’s a little known fact that South Africa is actually more sea than land. Our exclusive economic zone (EEZ) stretches 200 nautical miles from our shores. That gives us 1.5 million km2 of ocean, compared with 1.2 million km2 of land – and yet we fail to recognise or properly protect our ocean resources. It is as if we are sea blind.

Our coast is a prime tourist destination. Visitors come from all over the world to see our magnificent beaches, whales, penguins and sharks, providing a crucial boost to our economy. Yet South Africa has designated less than 15% of its coastline as a protected area – less than half the international recommendation. And less than 1% is classified as “fully protected”.

Hermanus in springtime is idyllic. With the fynbos in bloom, the flowers seem to flow down the slopes of the Hottentots Holland range to meet the sea. It’s easy to see why tourists love to come here, particularly during the whale-watching season, when the Southern Rights come in close to shore with their calves to breach and tail lob. But we should not forget that this was once the site of an ecocide, when humpback whales and Southern Rights were hunted to the brink of extinction.

We pulled back just in time; whaling was banned and whale numbers are recovering. Now the local economy relies almost entirely on its natural wildlife. And yet we seem intent on repeating our folly. We may not be actively hunting the penguin, but by failing to put protective measures in place, we are sealing their fate through inaction.

Hopelessness and despondency are one of the greatest threats to our wildlife – another reason we simply cannot afford to lose the African penguin.

This year has been dominated by Covid-19 and the economic crisis. But we must not let this distract us from protecting the environment on which we all depend.

The three measures outlined here are not unreasonable. Each one is easily doable; together they can change the future of the African penguin. What we are asking for is the protection of less than 0.5% of South Africa’s waters.

Sadly, we will not be able to save every bird. But we can still give this beloved South African species a fighting chance. I urge the government to take action today. DM