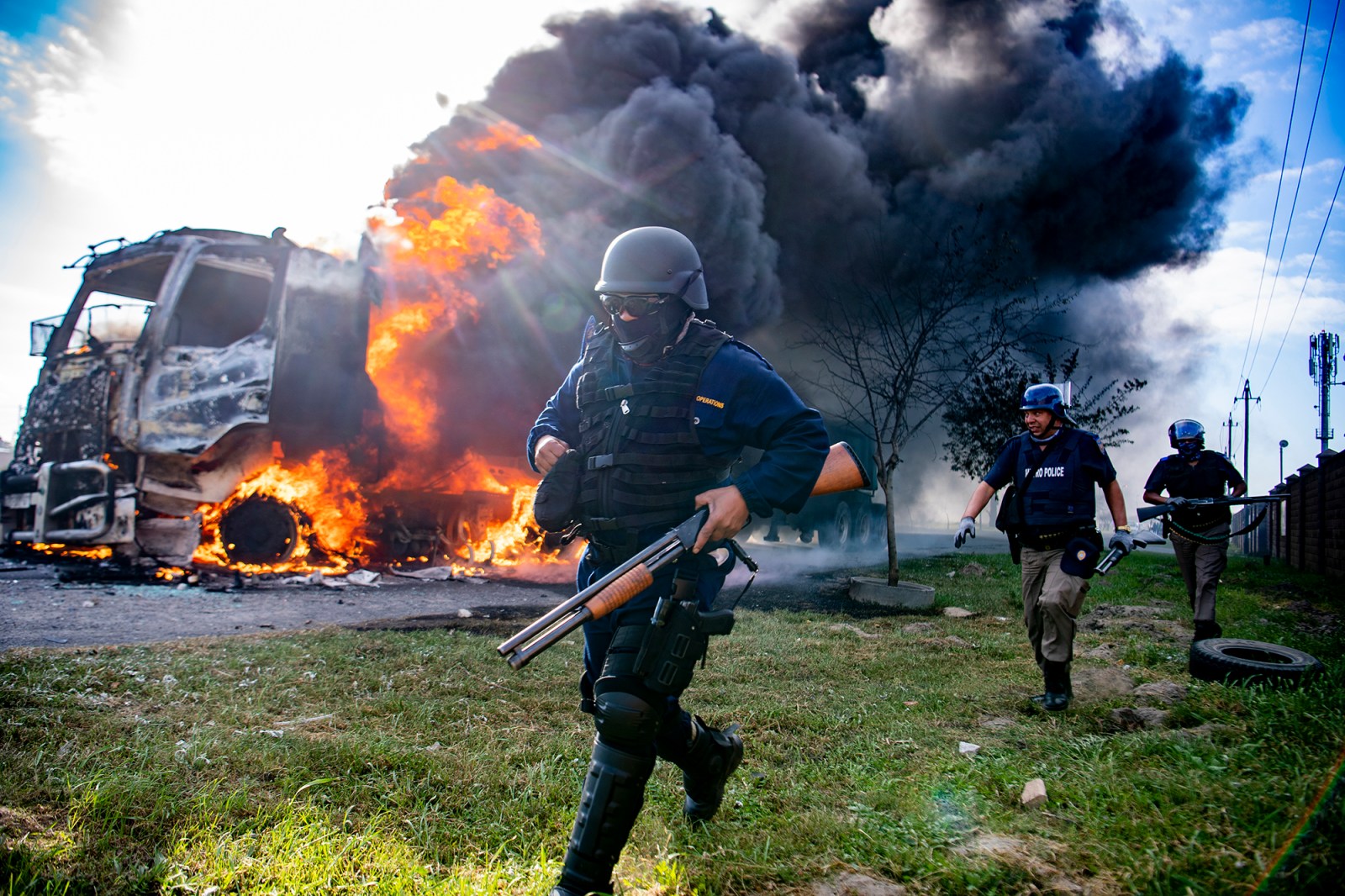 A truck was petrol-bombed when protests flared up in Happy Valley near Blackheath, Cape Town in July 2020. (Photo: Jaco Marais)

The trucking industry is again under siege, and the police and government seem unable to stop the attacks. The violence is apparently linked to xenophobia, but other motives may be at play.

First published in the Daily Maverick 168

Each crime occurred more than a year ago, in November 2019.

More than a year later, the war on South Africa’s freight road sector continues as law enforcement agencies and a government task team appear unable to stop what’s been described as an organised and coordinated effort to destabilise the industry.

The last week has been particularly brutal. Nine trucks were torched in Heidelberg on 19 November 2020, five were set alight between Parys and Sasolburg on 21 November, and nine were torched on the N3 in KwaZulu-Natal on 22 November.

A truck was attacked in Heidelberg, Gauteng, on 23 November, and a 45-year-old driver from KwaZulu-Natal was murdered. Between 24 and 25 November, six trucks were set alight in separate instances across Gauteng, Mpumalanga and KwaZulu-Natal.

Truck hijackings are common in SA, with 1,202 cases reported to SAPS in 2019/20, as criminals target lucrative goods they can sell. But these recent attacks appear motivated by an intention to intimidate the industry, as trucks are generally stopped and petrol-bombed rather than seized and looted.

“We cannot possibly tolerate the mindless and bloody lawlessness with which the road freight industry is being targeted,” said President Cyril Ramaphosa on Wednesday.

Such violence has been ongoing during Ramaphosa’s presidency. A record of incidents from the N3 Toll Concession, which manages most of the route between Durban’s port and Johannesburg, shows how such attacks on the N3 rapidly increased in April 2018 before spreading to other provinces.

The All Truck Drivers’ Foundation (ATDF) has denied its involvement in the attacks. It says it represents unemployed SA truck drivers and has lobbied the state to ban foreign drivers. The ATDF protested with the Umkhonto weSizwe Military Veterans’ Association against foreigners in Durban this week.

In a letter earlier this year, the ATDF gave the state an ultimatum to ban foreign drivers by 7 July; ATDF leaders claimed they did not write the letter. On 8 July, two trucks were attacked in Heidelberg, Gauteng, two in Klapmuts and Klipheuwel in the Western Cape, and another in Bellville in the Western Cape.

“Should I change my surname to Bushiri so that I can be hired in my own country?” asked ATDF national secretary Sifiso Nyathi when contacted by Daily Maverick.

“We condemn the burning of trucks. It’s an awful act.”

The ATDF has claimed that South African drivers are struggling while the industry employs foreigners. Nyathi believes the government is prioritising the interests of trucking companies and he says the ministerial task team established to resolve the ongoing dispute has failed to create regulations forcing employers to hire South African drivers.

“Why is the government scared of the employers? Is it because they also have operational trucks in the industry?… Is it a sin that I’m from South Africa and I can’t be hired?” Nyathi asked.

In May 2019, a ministerial task team issued a joint statement with the ATDF, the union Satawu and the National Truck Drivers’ Foundation condemning companies that employed foreigners who do not have the required visas and committed to cracking down on the industry.

In July 2019, the task team promised to stop the violence but little appears to have been done. Ramaphosa on Wednesday welcomed the few arrests that have been made.

During an interview with radio station 702 this week, SAPS Colonel Brenda Muridili said law enforcement is “on the ground” and “the national priority committee on this roadside industry has been re-established”.

The government task team held an urgent meeting with stakeholders on Friday and Police Minister Bheki Cele said about 35 trucks, 27 of which were in Gauteng, had been destroyed in the preceding week.

Police Minister Bheki Cele said that while 25 people had been arrested in association with the attacks last week, the government was considering deploying the SANDF to help police quell the violence.

“We have tried to put our forces on the road if you look at the last 24 to 48 hours we have really been on top of the situation,” Cele said on Friday.

Meanwhile, trucking sector leaders have welcomed investigations into companies’ labour practices and called for those who illegally employ foreigners to be held accountable, but they’ve suggested that the protests against foreigners are an excuse for the attacks.

Road Freight Association CEO Gavin Kelly this week wrote to Ramaphosa, calling on him to intervene and help stop the attacks.

“We have seen SA citizens attacked, seriously injured and even killed in this activity ‘aimed at foreign drivers’. Clearly – this is not about foreign drivers,” wrote Kelly.

“These attacks are being carried out with military precision, indicating that there is a strong co-ordinated leadership element with some level of formal military training. We are not clear on what the objective is – but the destabilisation of the country seems to be a large part of this,” he continued.

The courts have issued interdicts against ATDF protests and a July 2019 judgment noted multiple photos of ATDF members allegedly unlawfully detaining trucks while SAPS officers watched and didn’t act. According to Companies and Intellectual Property Commission records, the ATDF has been registered as a non-profit with interlinking directors at least three times since 2015.

“Every time there is a trucker death, they are linked to it,” Patrick O’Leary, editor of the online publication FleetWatch, told Daily Maverick.

In a Facebook post after the 19 November attacks, he said: “This is a declaration of war against truckers and the economy… So what is the agenda and who is setting the agenda? This goes deeper than protests against the employment of foreign drivers.

In a statement Muridili sent to Daily Maverick on Thursday, the ministers of police, home affairs, labour, transport and state security condemned the violence and said 84 attacks had been recorded between April and November 2020. The statement said government leaders had identified two elements to the violence, the first being labour issues “to do with … emerging tendencies by some employers displacing SA truck drivers with foreign nationals and … sporadic actions of torching of trucks by those affected”.

The second factor, said the government leaders on Thursday, was “business issues”.

“Ownership of trucks, tenders and contracts and competition between companies for lucrative routes are emerging as challenges,” read the statement.

It’s unclear exactly what they were referring to but critics of the industry have claimed the sector is dominated by a small group of exclusive companies and have called for the government to implement regulations to prioritise black-owned businesses.

The Truckers Association of SA (Tasa) was launched by Mary Phadi in 2017 to promote the transformation of ownership in the industry. On its Facebook page, Tasa often uses the tagline “equality for black truckers”.

In October 2020, Tasa marched to the Department of Transport in Tshwane over issues of transformation, demanding the state empower emerging companies.

Speaking on 702 this week, Phadi condemned the recent violence but prioritised the ATDF’s concerns about the employment of foreign drivers, arguing that the government had not acted on the ATDF’s claims.

Phadi said the Department of Labour was deflecting responsibility by calling on the police to resolve the violence.

“We are saying that let’s sit down and when we sit down [we’ll ask] how do you manage these employers that are not willing to come to the table to make sure that they are doing the right thing?” she said.

In its statement on the attacks on Thursday, the government task team said it was gathering intelligence from the security cluster, had devoted resources to priority areas and was reviewing labour legislation regarding the employment of foreigners.

“Attacks on trucks which deliver goods [that] are the lifeblood of SA’s and the region’s economy must be condemned in the strongest terms,” Employment and Labour Minister Thulas Nxesi was quoted as saying.

“Government is committed to the transformation and stabilisation of the road freight and logistics industry – a critical sector for growing the economy.” DM168