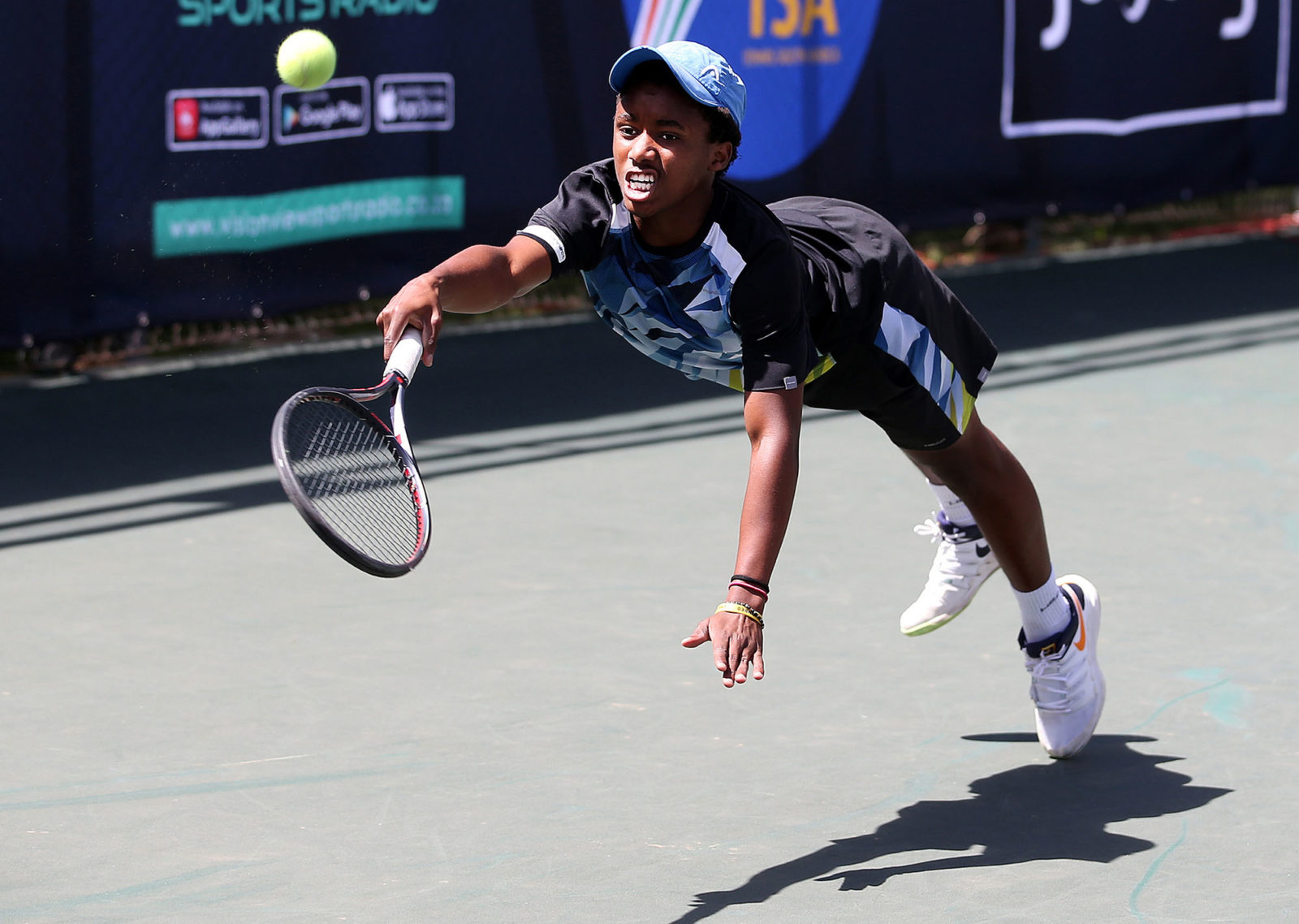 Kholo Montsi of South Africa in action against the 7th seeded Marco Brugnerotto (ITA) in the 1st round of the menís singles during day 2 of the SA Spring Open at Ellis Park Tennis Centre on September 25, 2019 in Johannesburg, South Africa. (Photo by Reg Caldecott/Gallo Images)

The world-renowned junior is now stepping on to the court with the big boys.

By his own admission, Khololwam “Kholo” Montsi is quite short (1.65m) compared to the average tennis player. However, that has not stopped him from reaching dizzying heights in the sport and carving out a name for himself.

This year is teenage tennis sensation Montsi’s last year of competing as a junior. The 18-year-old has been serving up elite tennis since first picking up a tennis racquet while still in primary school in his native East London.

With 2020 volleying unplayable shots since Covid-19 showed up, Montsi has dealt with the barrage the best way he knows how: making peace with a situation he can’t possibly control.

“It’s been a tough year, for sure. The thing that just kept me going was accepting that everything is not in my hands, I can’t control it. All I have to do is accept it and move forward,” the tennis ace said. “I told myself I’ve got a lot of months at home, so let me just get to work – work on my body, try to create good habits. Yes, I couldn’t play tournaments, but I couldn’t do anything about it.”

Despite the challenges that he has faced this year, including not competing for almost seven months due to Covid-19, Montsi has had some outstanding highlights.

He’s spent the year perched comfortably in the top 20 of the International Tennis Federation’s (ITF) junior world rankings, which saw him compete at the year’s first Grand Slam – the Australian Open juniors, as well as being granted an opportunity to represent South Africa internationally at the ATP Cup.

“I started the year well. I had the chance to be part of the ATP Cup team for South Africa in Australia. I didn’t do well in the Australian Open juniors, but that’s part of the sport. But I backed it with a good win at the African Champs in Pretoria,” said Montsi, who did the double at the African Championships, winning the singles and doubles junior titles.

After sitting at home for such a long period due the suspension of tennis tournaments, Montsi made a return to the court after he received his second direct entry into the main draw of a Junior Grand Slam tournament – this time to make his debut at Roland Garros in France.

Montsi said it was a blessing to play at his dream tournament in what is his final year as a junior. He has aspirations of dominating the tournament, and indeed his favourite surface is clay, on a similar scale to his hero – the otherworldly Rafael Nadal.

As for his debut in the tournament, it wasn’t quite the fairytale he and his fellow South Africans hoped for and he was knocked out in the second round by Britain’s Felix Gill. However, despite that disappointment Montsi is proud of his efforts.

“I think the tennis was good; I can’t complain. I competed well. Obviously, I didn’t have the time to play on clay courts because we don’t have one in South Africa,” he said.

“But instead of looking at the bad side, I just told myself that, ‘You’re at your dream tournament, so just give it all your all.’ I did all that I could… and I’m hoping in the future I can compete there again, and hopefully take it a step further.”

He bounced from that disappointment by winning the GrowthPoint under-18 tournament at the beginning of November in Free State. He did that by defeating second seeded Damian Nezar in straight sets to complete a hat-trick of victories in the tournament – with previous wins in the under-14 and under-16 sections as well.

Montsi started playing tennis in a bid to emulate his older brother, Siphosothando Montsi, who is three years his senior and plays tennis at the University of Illinois in the United States.

What makes the diminutive tennis ace, who enjoys writing music and playing an assortment of musical instruments in his free time, so special? According to his fitness coach Murray Ingram he is just a well-rounded athlete. “He’s a very well-coordinated young man. He’s got great movement, great footwork and fantastic hands. His hand-eye co-ordination is exceptional actually; he’s pretty quick,” Ingram told DM168. “He’s one of those guys that could’ve probably picked a sport. He’s an all-rounder who played a lot of different sports when he was younger, then decided to focus on tennis.”

Montsi, who does his studies online and has done so effectively for years with the support of his family, says the expectation that he will be the next big name in South African tennis history doesn’t faze him. “I’ve always dreamed of being a role model. I enjoy leading, taking that responsibility. So I don’t feel any pressure. Even when I lose, I still have support from people. And that makes me feel like there’s no pressure. It’s not like when I lose, people will say, ‘You let us down’. They’re still there for me.

“I definitely want to help grow the sport in South Africa. It’s not a one-man job, so it’s going to take a lot of people to do it.

“But for me just to be a part of that change… I want to make an impact in other kids’ lives, other black kids’ lives. I want to inspire them.”

To infinity and beyond

Even as someone who is world renowned and has won multiple titles as a junior, finances are a huge concern for Montsi. And he feels that once African tennis players can shake off that burden, they will be right up there with the best in the world.

“It really is tough, especially for us coming from this side of the world. If I look at South African tennis or African tennis, there’s a lot of players [who] I believe can make it, but do they have that financial backing? No, they don’t,” he said.

“If we did have that, things would be very different on our continent and in our country. Tennis is a very expensive sport. No matter how good you are, if you don’t have that financial backing, at the end of the day you can’t play tournaments.”

Ingram said that another challenge the teenager would now have to adjust to was going from being one of the best junior tennis players globally to effectively having his career reset once he started as a senior.

“While he’s done exceptionally well as a junior, he’s about to enter a phase that’s going to be a make-or-break period of his career. He trains with Lloyd Harris at the Anthony Harris Tennis Academy, and Lloyd’s about 23 years old now, and he went on a similar path,” Ingram said.

“You go from being a world-renowned junior, and then you go right to the bottom of men’s tennis – there’s no way around that. Then you start playing the smaller tournaments… It’s going to be a real test of his mental fortitude.”

The fitness coach said it was key for Montsi to remain grounded as he makes this transition, adding that he and coach Harris will work together to ensure that this happens.

“He needs to have his feet on the ground, and he does. But that’s our role as coaches, to remind him so that he does go on and reach the heights which we think he’s capable of,” Ingram said. DM168