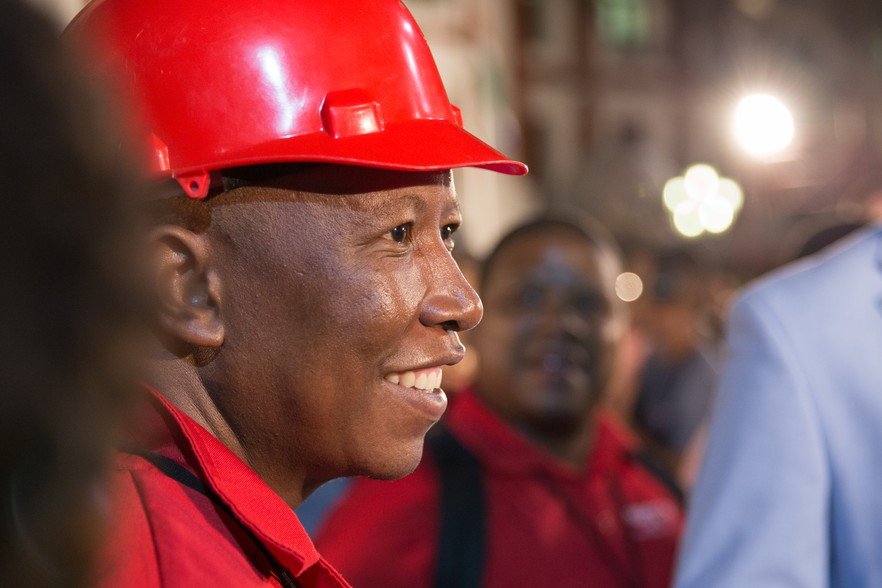 The Constitutional Court has ruled that an apartheid-era law under which Julius Malema was charged is unconstitutional. (Archive photo: Ashraf Hendricks)

The Constitutional Court says that a law used to charge EFF leader Julius Malema infringes on freedom of expression.

On Friday the Constitutional Court declared the crime of “incitement” under the Riotous Assemblies Act unconstitutional.

The Riotous Assemblies Act is a piece of “security” legislation that was passed in 1956 to suppress political opposition towards the apartheid government. One way the act tried to achieve this was to create the crime of “incitement”.

It was used to discourage civil disobedience. For example, Robert Sobukwe was convicted of incitement in 1960 for encouraging black people to disobey the pass laws.

According to the act, a person is guilty of incitement if they encourage or instigate another person to commit a crime. If found guilty, they can be sentenced to the same punishment as the person who actually committed the crime.

For example, if someone influences other people to engage in civil disobedience by encouraging them to not pay E-tolls, they can be found guilty of incitement and given the same punishment someone actually found guilty of not paying E-tolls could be sentenced to.

In EFF v Minister of Justice and Correctional Services, a majority of the Constitutional Court declared the crime of “incitement” under the Riotous Assemblies Act to be unconstitutional.

According to the majority judgment by Chief Justice Moegeng Moegeng, this is because the crime unjustifiably violates the constitutional right to freedom of expression.

In 2014 and 2016, EFF leader Julius Malema made several public statements where he allegedly encouraged people to unlawfully occupy private land.

Following Malema’s statements, the National Prosecuting Authority (NPA) charged him with incitement under the Riotous Assemblies Act. The NPA brought the charges against Malema on the basis that he allegedly incited people to commit a crime by encouraging them to unlawfully enter private property which is a criminal offence under the Trespass Act.

Malema and the EFF then challenged the constitutionality of incitement in the Pretoria High Court. Their constitutional challenge rested on two points.

First, the crime of incitement unjustifiably limits the constitutional right to freedom of expression. Malema said this was because incitement could result in the criminal prosecution of someone for exercising their constitutional right to speak freely about injustice or unjust laws. He also said he never encouraged anyone to act violently. Incitement should be limited to only criminalising expression which encourages violent acts and not peaceful acts of civil disobedience, Malema and the EFF argued.

Second, Malema argued he had not encouraged anyone to commit a crime. He argued this was because the Prevention of Illegal Eviction (PIE) and Extension of Security of Tenure Act (ESTA) provide constitutional protection to people who occupy private property without permission. Because PIE and ESTA were enacted to give effect to the constitutional right of people to not be evicted without a court order, the apartheid-era Trespass Act should not apply when someone occupies private property without permission.

This means that someone would not be committing a crime under the Trespass Act when they occupy private property without permission, because PIE and ESTA take precedence.

On 4 July 2019, the Pretoria High Court found that while incitement limits the right to freedom of expression, the limitation was reasonable and justifiable.

The court did, however, declare the Riotous Assemblies Act to be unconstitutional to the extent it allowed someone who incites a crime to be sentenced to the same punishment someone convicted of actually committing the crime could be sentenced to.

The High Court declined to rule on Malema and the EFF’s argument about whether PIE and ESTA take precedence over the Trespass Act.

The High Court judgment was then referred to the Constitutional Court which had to determine whether the High Court correctly rejected Malema’s remaining arguments about incitement and the Trespass Act.

Why incitement limits the constitutional right to freedom of expression

Justice Moegeng explained that the Constitution protects all forms of expression. Only expression which amounts to propaganda for war, the incitement of imminent violence or the advocacy of hatred based on race, ethnicity or religion is not protected.

Therefore, if someone was prosecuted for encouraging another person to commit a violent crime, they could not argue that their constitutional right to freedom of expression would be infringed.

The crime of incitement, however, is not limited to criminalising forms of expression which are not protected by the Constitution. This is because it criminalises expression that encourages another person to commit “any offence”.

Incitement therefore also criminalises expression which encourages people to commit non-violent crimes or to engage in peaceful and non-violent civil disobedience against laws they believe to be unjust.

A majority of the court found that the crime of incitement, as defined by the Riotous Assemblies Act, limits the constitutional right to freedom of expression. The second question the court considered was whether this was justifiable under the general limitation clause.

Why the limitation could not be justified

The general limitation clause is a section of the Constitution that allows the government to infringe a constitutional right, if it can show the court that the infringement is reasonable and justifiable in an open and democratic society based on human dignity, equality and freedom.

Given its importance, very persuasive reasons would have to exist to show it is justifiable to criminalise constitutionally protected forms of expression.

The majority judgment concluded that while incitement has the legitimate objective of discouraging people from encouraging others to commit criminal acts, its limitation on the right to freedom of expression went too far and was not reasonable and justifiable.

This was because it is not reasonable and justifiable to criminalise expression which did not encourage others to commit non-violent crimes or crimes that are not “serious”.

The majority judgment said that a better solution would be for incitement to only criminalise expression which encourages others to commit a “serious” crime, such as murder, rape or armed robbery. This would allow people to encourage others to engage in peaceful civil disobedience but also allow the government to prosecute people who encourage others to commit violent or serious crimes which would still achieve the objective of crime prevention.

The crime of incitement under the Riotous Assemblies Act was therefore declared unconstitutional to the extent it allowed for the prosecution of someone for encouraging others to commit a “trivial” crime or a crime that is not “serious”.

Parliament has been given 24 months to fix the constitutional problems with the Act.

The court ruled that in the interim, the crime of incitement should read to only allow for the prosecution of people who encourage others to commit a serious or violent crime.

The majority judgment declined to confirm the High Court order.

This means that someone convicted of incitement for encouraging others to commit a serious or violent crime can still be sentenced to the same punishment someone actually convicted of committing that crime could be sentenced to. (A dissenting minority judgment by Judge Steven Majiedt would have upheld the High Court order.)

Similar to the High Court, the Constitutional Court refused to consider whether it is still a criminal offence to occupy private property without permission under the Trespass Act whenever PIE or ESTA applies.

Justice Moegeng said that nothing prevents Malema or the EFF from bringing a court case to challenge the constitutionality of the Trespass Act in the future if they wish.

Each party was ordered to pay its own legal costs. DM