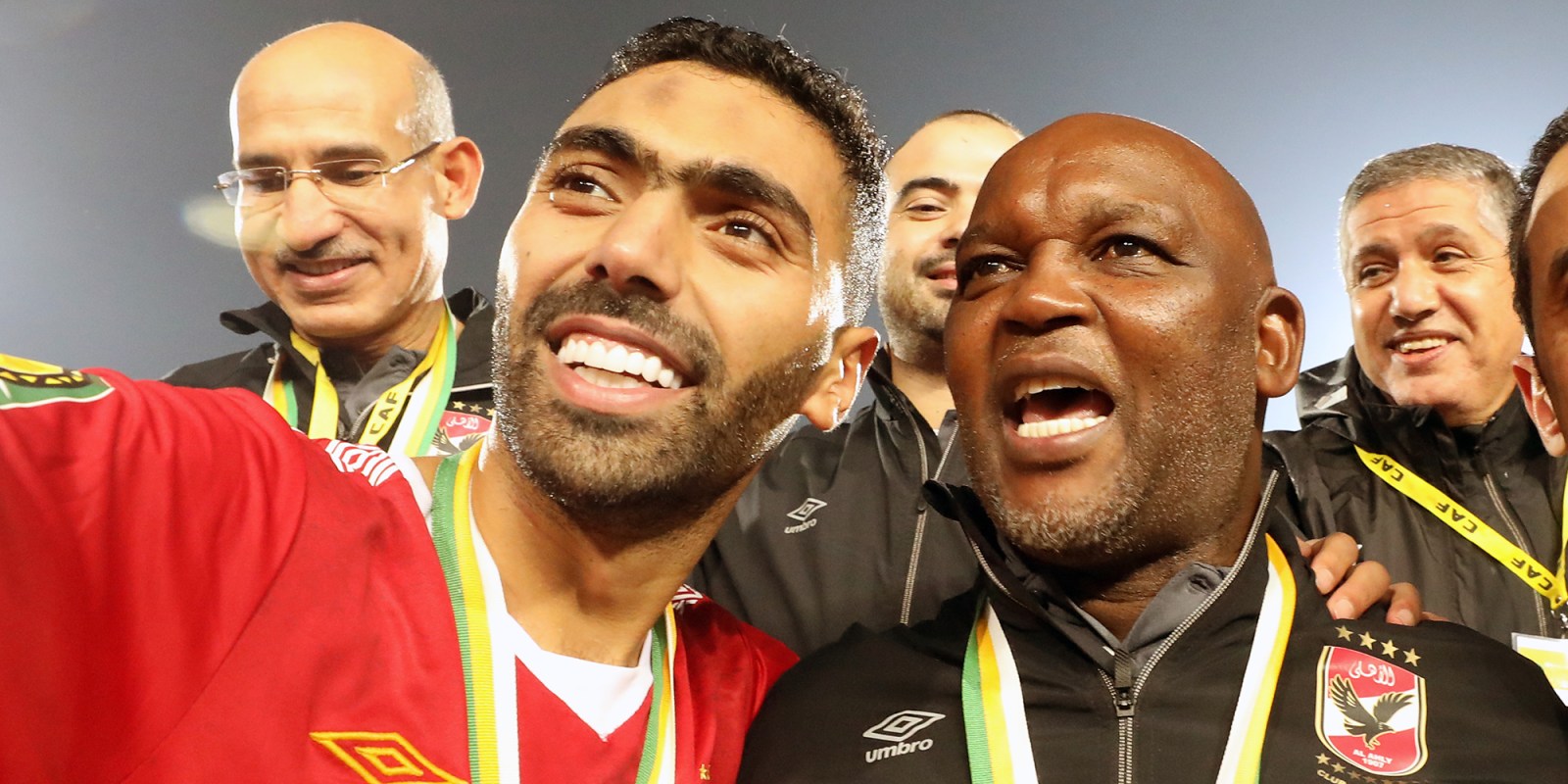 Pitso Mosimane added yet another feather to his already decorated cap. The former Mamelodi Sundowns coach ended a seven-year African Champions League drought for Egypt’s Al Ahly, as well as adding to his first Champions League trophy. But how far up the coaching ladder can he climb?

For all his confidence and self-belief, it is unlikely that when a fresh-faced Pitso Mosimane replaced Bruce Grobbelaar as SuperSport United’s first-team coach in 2001, he would have imagined himself going on to win two Caf Champions League titles in his career.

However, on Friday he did just that as he led Egyptian giants and Africa’s most successful club, Al Ahly, to the Champions League title with victory over the Red Devils’ bitter rivals Zamalek.

“Finally, I had to come to the Nile River to catch the big fish,” said Mosimane in reaction to the victory.

Mosimane has been in charge of the side for only two months, having taken the baton from Swiss coach Rene Weiler, who departed the club in September.

The Kagiso-born mentor led the side to its ninth crown as African champions with the 2-1 victory over Zamalek on Friday. Al Ahly’s haul is a record in the continental competition.

Granted, when Mosimane replaced Weiler, Al Ahly were already in the semi-finals. However, he still had to motivate the players after their sabbatical, induced by Covid-19.

He has done so perfectly in the short time he has been in charge, and in typical “Jingles” style too – as Mosimane as affectionately known. This was captured brilliantly in the second leg of the semi-finals versus Wydad Casablanca, whom Mosimane’s men defeated 5-1 on aggregate to reach the final.

In an empty Cairo International stadium, Mosimane could be heard shouting to his players to just remain composed and pass the ball to frustrate the opponents.

Speaking after the final, Mosimane alluded to the fact that the task they faced was not an easy one, even though he only had three hurdles to guide the team over – the two-legged semi-finals and the final.

“It was not easy, let’s be honest. It’s tough but you feel good. Al Ahly trusted me that I could deliver the trophy, and the trophy is delivered,” said the 56-year-old after leading the Egyptians to their first continental crown in seven years.

“You made most Egyptians proud and you made most South Africans proud. After the final whistle, the whole of Cairo International stadium erupted singing your name. We felt proud as South Africans,’’ said Jordaan after the game. “Every other topic temporarily ceased to exist and everyone spoke fondly of Pitso from Cape to Cairo.”

Mosimane and the Egyptian side seem like a match made in heaven. Al Ahly are one of the most successful clubs in world football, having collected 42 league titles, 36 Egypt Cups and now this ninth Champions League trophy.

If anyone can navigate the vigours of coaching such a successful side, it is Mosimane. He himself has a sizeable trophy collection, achieved since taking over the mantle at SuperSport as a 37-year-old novice.

His collection includes numerous domestic trophies and a record haul of five South African league titles, which he won in his eight-year tenure at Mamelodi Sundowns, plus his first Champions League which he won in 2016, also with Masandawana.

At Al Ahly, they’re already impressed with Mosimane and the style of football he has brought along with him.

“Our manager loves playing beautiful football. His history and his tactics show the type of manager he is,” said the club’s sporting director, Sayed Abdelhafiz, in October.

Should he show the same hunger and passion which he showed at Sundowns, and his players continue to buy into his philosophy, Mosimane will be successful at Al Ahly. And there might come a point where he outgrows the Egyptian giants.

Having played at Greek side Ionikos and Belgian side Rita Berlaar towards the end of his career, undoubtedly the man who is considered by many as the most successful South African coach, harbours dreams of returning to Europe one day – this time as a coach.

He has already broken through the ceiling by becoming the first South African to coach Al Ahly. Should his career continue on its current trajectory, Mosimane could well find himself coaching in Europe before he calls time on his career.

For now, though, he will continue building on his already outstanding legacy so that it may one day be as tall as the pyramids in Egypt. DM