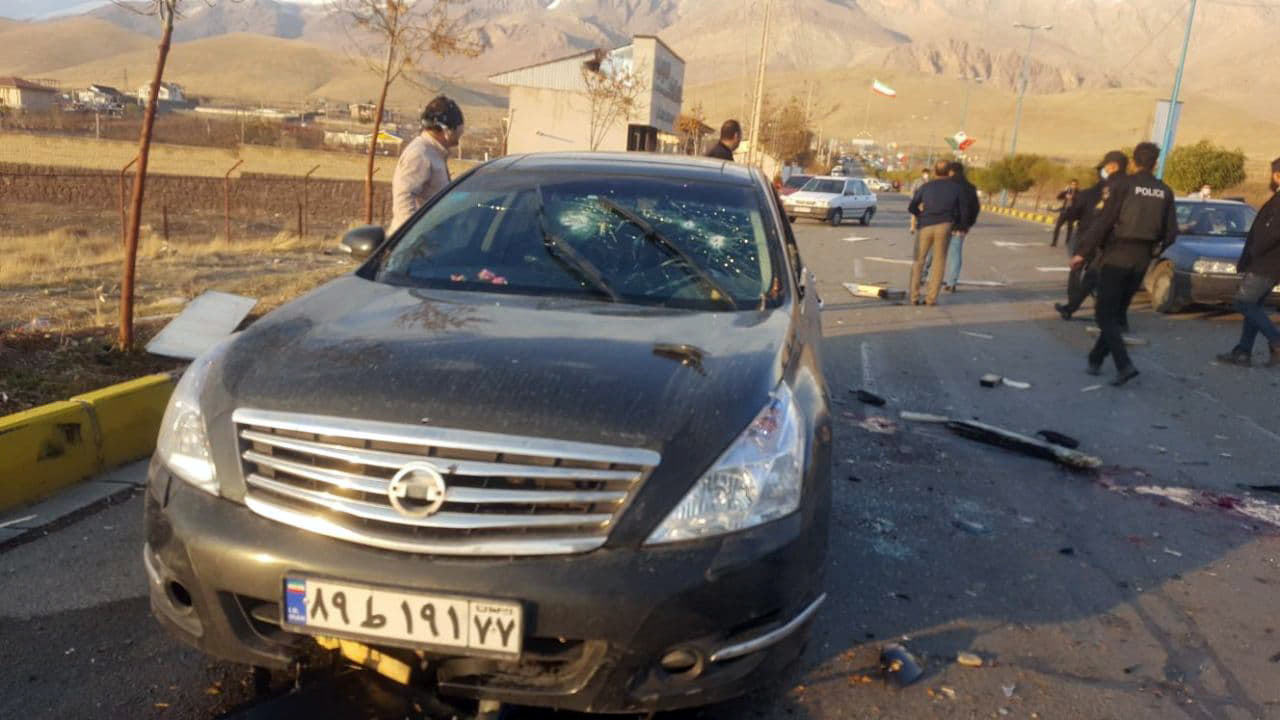 A handout photo made available by the Iranian state TV (IRIB) official website shows the scene of the terror attack on top Iranian nuclear scientist Mohsen Fakhrizadeh, in the city of Damavand, north of the capital city of Tehran, Iran, 27 November 2020. According to media reports, Iranian nuclear scientist Fakhrizadeh was killed in a terror attack. EPA-EFE/IRIB HANDOUT HANDOUT EDITORIAL USE ONLY/NO SALES

Last week Americans celebrated Thanksgiving Day, most survived Black Friday, and have been gearing up to cope with the next four weeks of holiday cheer amid the ballooning pandemic, while President Donald Trump seemed almost on the verge of accepting his defeat and the impending inauguration of Joe Biden. But with the latest crisis in Iran, who knows what will happen next.

At one point in the past few days, it almost seemed as if it would be, if not smooth sailing, at least a kind of twitchy, nervous-making normality in the presidential transition in the US. The incumbent president had released his chokehold on the General Services Administration to authorise transition funds and access for Joe Biden’s team to begin working with the current administration for the expected steps of a normal transfer of power. Meanwhile, in court action, judges across the nation had almost unanimously (39 decisions out of 40) rejected those outlandish claims of electoral fraud, vote rigging, corruption, or anything else that might possibly have swung the election to Donald Trump.

Still, even as Trump was edging gingerly into the final acceptance stage of grief, when he wasn’t out bashing golf balls, the president continued the pouting behaviour of a five-year-old, the saying of appalling things about his opponent, and the insisting on Fox News TV interviews that he had really won the election in the face of all evidence to the contrary. He listened anew to the whispers from those wild and crazy lawyers around him who were saying just one more lawsuit could crack the whole thing wide open for him. It hasn’t. It didn’t. It won’t.

As a result, conversation among the chattering classes has increasingly shifted to whether or not Trump will ever issue a concession speech or statement; whether he will ever call the winner to offer his congratulations; or whether he will even show up at Biden’s inauguration on 20 January 2021. Or, more importantly, whether he will tell his more hysterical supporters to sit down, stop kvetching, and cease daydreaming about plots that could stop the next president in his tracks.

But perhaps it doesn’t even matter so much what Trump does or says about the election any more. The real political class is now focused on those two Senate races in Georgia that will decide whether Republicans continue to control that body, or if the membership will be split 50-50 between the two parties, thus making it a Democratic Party-controlled body with Kamala Harris casting the deciding vote for the Senate’s leadership — and anything else that would be a tie vote. That could have an enormous impact on Biden’s legislative agenda and executive appointments and treaties requiring Senate confirmation.

The two Georgia Democratic candidates are state legislator Jon Ossoff and Rev Raphael Warnock against incumbent Republican senators David Perdue and Kelly Loeffler. No candidate received more than 50% of the vote in the 3 November election in either race, hence the run-off elections set for 5 January 2021. Perdue’s six-year term is coming to an end, but Loeffler’s term was a special appointment to fill a sudden vacancy from the resignation of Senator Johnny Isakson for ill health. The winner of the Warnock-Loeffler election would, therefore, only serve for two years until the next midterm election in 2022 for a regular six-year term of office.

The unknown factor in this unusual dual election is the charge by Trump that the 2020 election was rigged. An unintended consequence of this often-repeated charge, however, is whether or not that false rhetoric will impel sufficient Republican voters to stay home and not even bother to participate — on the grounds that the election is already a done deal anyway. No one knows yet.

As a result, political party operatives, political strategists, office-holders such as Trump and Vice-President Mike Pence and soon-to-be-national office bearers such as Biden and Harris, as well as many volunteers are all converging on Georgia for some heavy duty campaigning over the next five weeks because those results promise to be particularly consequential. Voting rights activist Stacey Abrams was tabbed with having made a significant contribution towards turning Georgia to supporting Biden in the presidential election, and many are now wondering if her organisational skills can make a similar contribution in these Senate races as well.

Last week, Biden introduced much of his foreign policy/national security team, but not yet his nominee for secretary of defence or director of the Central Intelligence Agency. It is not clear if the president-elect has yet managed to reconcile competing interests among his party in deciding who to appoint to those key positions – some of those interests revolving around the questions of racial and gender balance in his cabinet. Picking the former deputy secretary of defence under Barack Obama, Michèle Flournoy, would speak to gender balance, but going with former homeland security secretary Jeh Johnson, or retired General Lloyd Austin, for example, would address the racial equation. Or, perhaps Biden may have other ideas.

Meanwhile, the sense is that this week the president-elect will introduce some or all of his economics team. All but formally announced already is Dr Janet Yellen as treasury secretary. Yellen has had a distinguished career as a White House senior economics officer and as chair of the Federal Reserve Bank, as well as in academia. But nominees for the Council of Economic Advisors, the National Economic Council, the US Trade Representative, and the commerce department secretary all remain unannounced. Arguably, the makeup of this team (and their ideas) to deal with the current national economic crisis may, in the aggregate, be even more important than that of the foreign policy team already announced before Thanksgiving, given the country’s economic travails.

While Trump has less than two months left to befoul his legacy further, or to make the transfer of power waters even muddier, he and his true believers have been busy. They have been giving up on the “open skies” arms control agreement and refusing to push for new START nuclear arms negotiations, in addition to rolling back environmental regulations, civil service personnel regulations, and pursuing immigration rules changes such as very stiff monetary deposits by would-be African visitors from various nations, in exchange for their visas.

But perhaps the most problematic event that may bedevil the incoming Biden administration has been something that presumably was not a direct act by the US. That was the killing of Iranian nuclear expert Mohsen Fakhrizadeh the other day. Fakhrizadeh died when assassins ambushed his car outside Tehran, but the identity and organisers of the hit remains a mystery. What is clear is that the Trump administration, in association with Benjamin Netanyahu’s government in Israel have been vociferous in decrying Iranian nuclear ambitions, amid loud muttering that they must be stopped. In recent years, officially unattributed cyber attacks have been launched against Iranian efforts, as well as yet unsolved explosions at nuclear plants have occurred.

Over the weekend, David Sanger wrote in The New York Times of the killing:

“The assassination of the scientist who led Iran’s pursuit of a nuclear weapon for the past two decades threatens to cripple President-elect Joseph R. Biden Jr.’s effort to revive the Iran nuclear deal before he can even begin his diplomacy with Tehran. [Italics added.]

“And that may well have been a main goal of the operation.

“Intelligence officials say there is little doubt that Israel was behind the killing — it had all the hallmarks of a precisely timed operation by Mossad, the country’s spy agency. And the Israelis have done nothing to dispel that view. Prime Minister Benjamin Netanyahu has long identified Iran as an existential threat, and named the assassinated scientist, Mohsen Fakhrizadeh, as national enemy No. 1, capable of building a weapon that could threaten a country of eight million in a single blast.

“But Mr. Netanyahu also has a second agenda.

“ ‘There must be no return to the previous nuclear agreement,’ he declared shortly after it became clear that Mr. Biden — who has proposed exactly that — would be the next president.

“Mr. Netanyahu believes a covert bomb program is continuing, until yesterday under Mr. Fakhrizadeh’s leadership, and would be unconstrained after 2030, when the nuclear accord’s restraints on Tehran’s ability to produce as much nuclear fuel as it wants expires. To critics of the deal, that is its fatal flaw.”

But, of course, there is as yet no claim or proof of responsibility for the death, and certainly no direct acknowledgement of authorship of either the deed or the plans and strategy behind it.

In fact, it is also possible to imagine a larger range of possibilities than just the obvious ones punted by Sanger. Besides Israel and the US, is it beyond the realm of possibility for the killing to have been carried out (with or without the help of the US and/or Israel) by some of Iran’s other regional enemies such as Saudi Arabia or the United Arab Emirates interested in limiting Iranian capabilities (albeit at the cost of a rise in tension)?

Or can suspicions totally ignore the possibility that a group or groups within Iran are eager to provoke a more direct, confrontational posture against the US or Israel? In that case, the killing could represent a kind of casus belli that would allow Iranian groups to carry out their own plans. This kind of thing, almost regardless of who ordered or actually did the hit, has now already raised the temperature and made it that much harder for a Biden administration to carry out negotiations to re-enter the six-power agreement on Iranian nuclear efforts the Trump administration had withdrawn from early on its tenure of office.

Yes, this begins to sound rather too much like the plot of a novel like Eric Ambler’s The Mask of Dimitrios or Dashiell Hammett’s The Maltese Falcon, or perhaps even Stephen Gaghan’s film Syriana. Lots of plots within plots, detours upon detours. False flags everywhere. Ultimately, whatever the truth of what happened the other day on the road outside Tehran, the Biden presidency has encountered its first foreign policy speed bump, even before the incoming president has taken his oath of office. DM