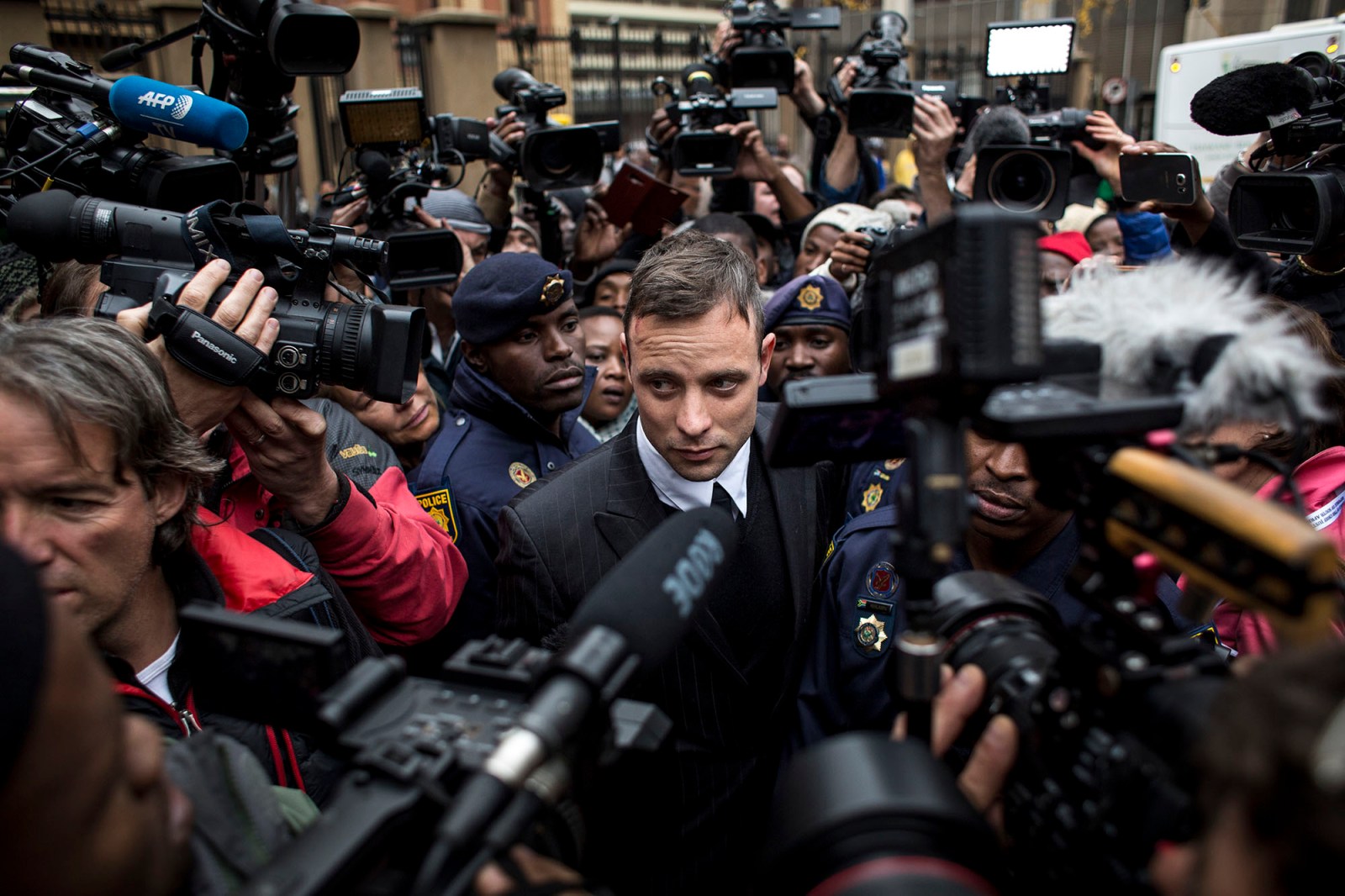 A new series presents the Pistorius trial as the tragedy of a nice white boy. Rebecca Davis holds back the tears.

Is there anything left to say about Oscar Pistorius and the night on which he took the life of Reeva Steenkamp? The British makers of an exceedingly long new four-part documentary series currently airing on DStv appear to think so. Those of us who lived through the minute-by-minute coverage — or, for our sins, produced that coverage — of South Africa’s most notorious true crime event may disagree.

The series, tellingly titled The Trials of Oscar Pistorius, comes trailing international backlash. The BBC had to withdraw a trailer for it in the UK after the preview managed to avoid naming Reeva Steenkamp altogether. Who is Steenkamp to the story, after all, other than the woman who selfishly ended Pistorius’s glittering athletic career by getting in the way of the four bullets he pumped through a toilet door on Valentine’s Day 2013?

Director Daniel Gordon has fuelled the fire by giving interviews in which he said he hadn’t quite made up his mind about whether Pistorius knew Steenkamp was in the famous bathroom. Such ambivalence may have been kosher back in the Dark Ages of 2013, but seven years later social media tends to be less tolerant of this kind of indecisiveness. In truth, though, the documentary series itself strongly suggests that Gordon has very much settled his internal debate in Oscar’s favour.

For evidence of this, you need look no further than the fact that excerpts from Pistorius’s testimony in court are broadcast in the fourth episode of the series with the accompaniment of heart-rending string music. I had to fast-forward through those bits. Other journalists who covered the trial seem to have felt similarly. I texted a media colleague who was even more immersed in the saga than I was to ask if she’d seen the series. “Honestly, I couldn’t watch it all. I hate that story,” she replied.

Watching the series evoked many reactions in me, but none more strongly than a sense of unreality. Did this all really happen, or was it some sort of insane fever dream? Did radio stations really broadcast Pistorius’s bail hearing live? Did people really cluster around wirelesses to listen, as footage from the time suggests, like a scene from World War II? Had we all lost our collective minds?

Consider that, in the seven years since then, we have seen former president Jacob Zuma and ANC secretary general Ace Magashule both appear in court. EFF leader Julius Malema has been in and out like a fiddler’s elbow. On none of these occasions can I recall the business of the nation essentially grinding to a halt as South Africans pressed their ears to radio speakers.

Of course, the question of why the Pistorius case held the country’s attention in such a stranglehold has been endlessly unpacked. Sportsmen are our truest celebrities; the downfall of the rich and famous is thrilling; the victim and the protagonist were young and white and attractive; fear of crime brings us all together; we all hunger for news that isn’t about politics. Fine.

But looking back now, the level of fascination around this story still strikes me as utterly bizarre. Would it happen that way again today? I suspect not. We may not feel like a very different country from South Africa seven years ago, but in some ways we are. On Valentine’s Day in 2013, to give one example, the EFF was still five months away from its launch as a political party. One senses somehow that the EFF in its current incarnation would do its level best to derail a national obsession with a white-on-white crime.

Or would the Fighters descend on the Pretoria courthouse to induce some kind of theatrical showdown? At the time, we had to make do with the sedate green-bloused ladies of the ANC Women’s League – which, for the benefit of our younger readers, is an arm of the ruling party ostensibly dedicated to the upliftment of women.

More surreal memories surface with every episode. Watching the footage of the bail hearing, one hears a yelled “Yes!” as Pistorius is granted bail — and recalls that the triumphant shouter was businessman Kenny Kunene. Was it plausible that Kunene and Pistorius were really pals? Given the deplorables that were eventually to emerge as bit players in the Pistorius story, quite possibly. Spare a thought for soccer bruiser Marc Batchelor, who couldn’t be interviewed for the series on account of meeting his end in a hail of assassins’ bullets in Johannesburg last year.

Time has been kinder to other protagonists. The series reveals that defence attorney Barry Roux has lost some weight – or perhaps it’s that we’ve never seen him uncloaked from his black robes? Valiant state prosecutor Gerrie Nel is AWOL from the documentary, presumably too busy running private prosecutions for AfriForum.

A troop of representatives from the Pistorius family do duty on camera, all helping to build the meticulously constructed portrait of the athlete as a sensitive and loving young man who overcame all the odds blah blah. If I’m breezing over this bit, rest assured that the documentary does not. It pinpoints the source of Oscar’s great tragedy as being the death of his mother, and also, possibly, apartheid. It takes a particular straining of the imagination to present a white boy born in 1986 as being one of apartheid’s victims, but if the series does not explicitly state as much, it certainly gestures in that general direction.

Absent are Steenkamp’s parents, who have reportedly taken to demanding vast sums of cash for media interviews. Good for them, I say, given how many people continue to extract pounds of flesh from their daughter’s murder. What the documentary has no shortage of is British people holding forth about South Africa. Never before has our beloved country seemed so much like the heart of darkness, albeit that half of England spend their summers throwing back white wine in Cape Town.

There are no new revelations in the series, as far as I can tell, except for some previously unseen photographs of Oscar brandishing guns – which one assumes the defence went to great lengths to keep out of the public eye during the trial. How Pistorius is doing in prison is largely glossed over, though former schoolteacher Bill Schroder says he went to visit Oscar in the clink and was disappointed to see he’d taken up smoking. Of course he has, Bill! It’s prison!

The documentary ends with the information that Pistorius’s release date is “yet to be determined”, which probably gives international viewers the impression that in our banana republic nice white boys can be incarcerated indefinitely.

Most revealingly, the final word is given to Oscar’s uncle Arnold, dolefully predicting that people’s perceptions of his nephew can “never be fixed”. Unfair as it might seem, that’s one of the consequences of murdering someone.

Some might say that a more appropriate note on which to end might have been to refocus the tragedy on Reeva Steenkamp. But if this documentary is anything to go by, her life is doomed to fade while Pistorius’s story is repolished into brightness. The more things change, the more they stay the same. DM168