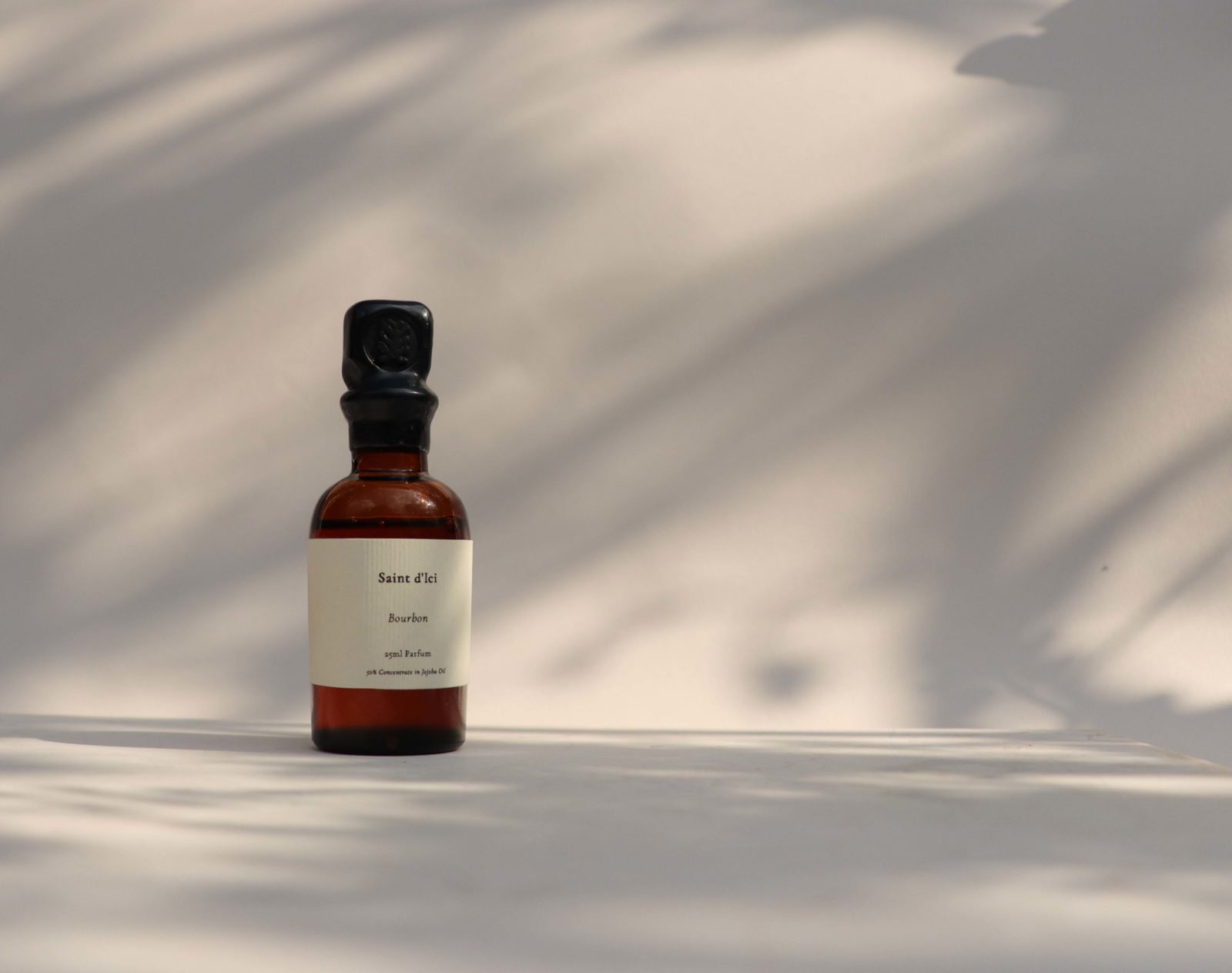 'Natural perfumes evolve over time. They mingle with the wearer’s own personal odour, rather than masking it... In effect you have a perfume that becomes your own', says Marie Aoun, creator of botanical perfumes and the founder of the brand Saint d’Ici.

On the day of the interview, natural perfumer extraordinaire Marie Aoun, is wearing all white – it might not be on purpose but it seems to be an apt analogy to the blank canvas she refers to when she starts working on a new scent.

It starts with almost nothing: an idea, a passing thought, a desire, a molecule; it merges with tinctures, essences, natural ingredients sourced from around the world, but mainly locally. And through a complex process of distillation, blending, trials and errors, it becomes a scent, ethereal, delicate, capturing nature’s bouquet and bottled in dark glass for years to come.

Aoun, who is born in Belgium, didn’t start her career in perfumery. She studied fashion, and worked in the retail fast-fashion industry for years, trying to feed and grow a capitalist model of consumption she in fact, disliked profoundly. And so she quit, started to study for a Masters in Commerce while spending most of her spare time in her garden. There, she found her “antidote to everything”, spending her day gardening until it was dark – surrounded by the scent of jasmine, fennel and rose geranium. It is after she read a 2010 New York Times article about “Dominique Dubrana (known as AbdesSalaam Attar) a 54-year-old Frenchman (now 64) living in Italy, a Sufi convert, a grand eccentric and a genius of sorts”, and also a botanical perfumer, that she discovered the, at the time, still niche world of natural fragrances.

A few months later, she was on a plane to Italy, to meet – and learn from – Attar. “He’s been doing this for (around) 35 years…  He’s a Sufi. He’s done his time in the deserts. And this is the thing that guides his perfumes. So he comes from a very spiritual place… He calls the perfumes he creates, ‘perfumes of the soul’, and he believes in the ingredients as being healing to the soul. I’m very lucky that I learned from him because I think he really has such a deep love for natural ingredients. He doesn’t cut corners, he only works with the best natural ingredients; being able to smell and work with his library of ingredients was… amazing”, she says.

Aoun trained with him for ten days, immersed in his world and practice; there, she learned how to use her nose – “It is exhausting! You are so physically drained at the end of the day. Because it’s like something you have to learn to exercise…” – as well as how to distil, using “a hundred litres of distiller”.

“We did laurel leaves, (collected) on the property; that, to me, was the epitome of the course. I love that process, you’re taking something that is a plant and distilling it to its essence. And then when you see the little droplets of highly concentrated fragrance oil that floats on top, it’s just magical. It feels like we’ve been able to tap into something that’s so special”, she says adding, “He took me on the ride of distillations, and he let me smell some of the other distillations he did. And then we compared it to the perfume ingredients that he buys from some very reputable sellers of natural ingredients. And half the time his were just as good if not better. And I (wondered) ‘do you really need to go to these highly reputable big fragrance houses?’”

Her view is that we are not using our nose and smell – one of our fifth senses – as much as we should or could use it. And that’s mainly because our nose is constantly being overpowered by an overdose of synthetic scents popping all around us all day; they mess with our smell, distracting us from capturing real natural aromas and fragrances; it can be overwhelming, like walking into a nightclub and being blinded by stroboscope lights, or listening to multiple sounds and only hearing cacophony. And when a synthetic perfume is on our skin, and its powerful scent lingers for hours and hours, it prevents other scents, natural ones, to surprise us.

And so, back to South Africa, she created Saint d’Ici, a small range of botanical perfumes – to this day, she has created about nine scents, with names like Bourbon, Within a Building Grove, Entier (‘Full’ in French), and Moussem. Saint d’Ici is a play of words mixing French and English; ‘Saint’ reminisces of ‘Scent’ and ‘d’Ici’ means ‘from here’ in French.

She sources her ingredients from across the world, with handpicked farmers who share her values and dedication for nature and the purest oils and essences. “I like sourcing directly from small producers because you are guaranteed that it’s not adulterated. And adulteration is something that happens a lot in the industry. They (sometimes) cut it with synthetics, or they even cut if with naturals sometimes…”, she explains.

When she started, she just wanted to create “a few simple natural perfumes”, that reminded her of the fragrances her nose captured during her childhood: eau de Cologne and lavender, mainly. “What I really wanted was that classic French perfume in a sense”. The ‘cleanness’ of Cologne will be a constant in most of her creations.

Then, she started to order and smell different ingredients, and discovered a whole new world: fynbos, labdanum, rosemary. The process to create natural fragrances is a laborious and an organic one: first, one has to find the right ingredients and the right producers, which is not always easy; second, one needs patience as blending ingredients to create the right scent takes time.

“Our perfumes are blended in limited quantities, between 50 and 350 bottles per fragrance, to honour the variability of botanical ingredients. When working with nature, we respect the seasons and cycles that yield our precious ingredients. At times, one particular ingredient may not be repeated from one year to the next, and at other times, the harvest may be vastly different to the one prior, as crops are inevitably dependent on their climate and natural environment, or terroir”, she writes.

Indeed, Aoun explains, “I spend so much time with my perfumes re-blending to try and get a similar perfume that I had before… But because my rose geranium changes, it’s like a completely different perfume; and if not completely, it doesn’t really bear resemblance to the previous one”.

And yet, these changes, the idea that a scent, even one’s favourite, is ephemeral, that it morphs with time and with one’s own skin, is something that seems particularly apropos with nature’s and the world’s cycle.

Her new collection includes ‘A Fern’, “my take on the classic fougère type of perfume. The beauty of this blend rests on the tension between the clean, almost powdery, green notes and the woody wildness that lies beneath”, ‘Magnolia’, which she says is “an intensely powdery white magnolia. Soapy-clean and dry but with a tender floral heart. In one word: insouciance”, or Nsika, which is “isiZulu for the timber that supports a rondavel roof and alludes to a quiet but unencumbered strength; Nsika highlights Ouhout’s vast range of notes. The opening is bold and clear, the heart is warm and the drydown is the mossy with the sharp scent of decaying wood”, she explains.

“The other beautiful thing about natural perfumes is that they evolve over time. They are a lot less linear than synthetic perfumes. They also mingle with the wearer’s own personal odour, rather than masking it. So, in effect you have a perfume that becomes your own”, says Aoun. Who wouldn’t want that? DM/ ML