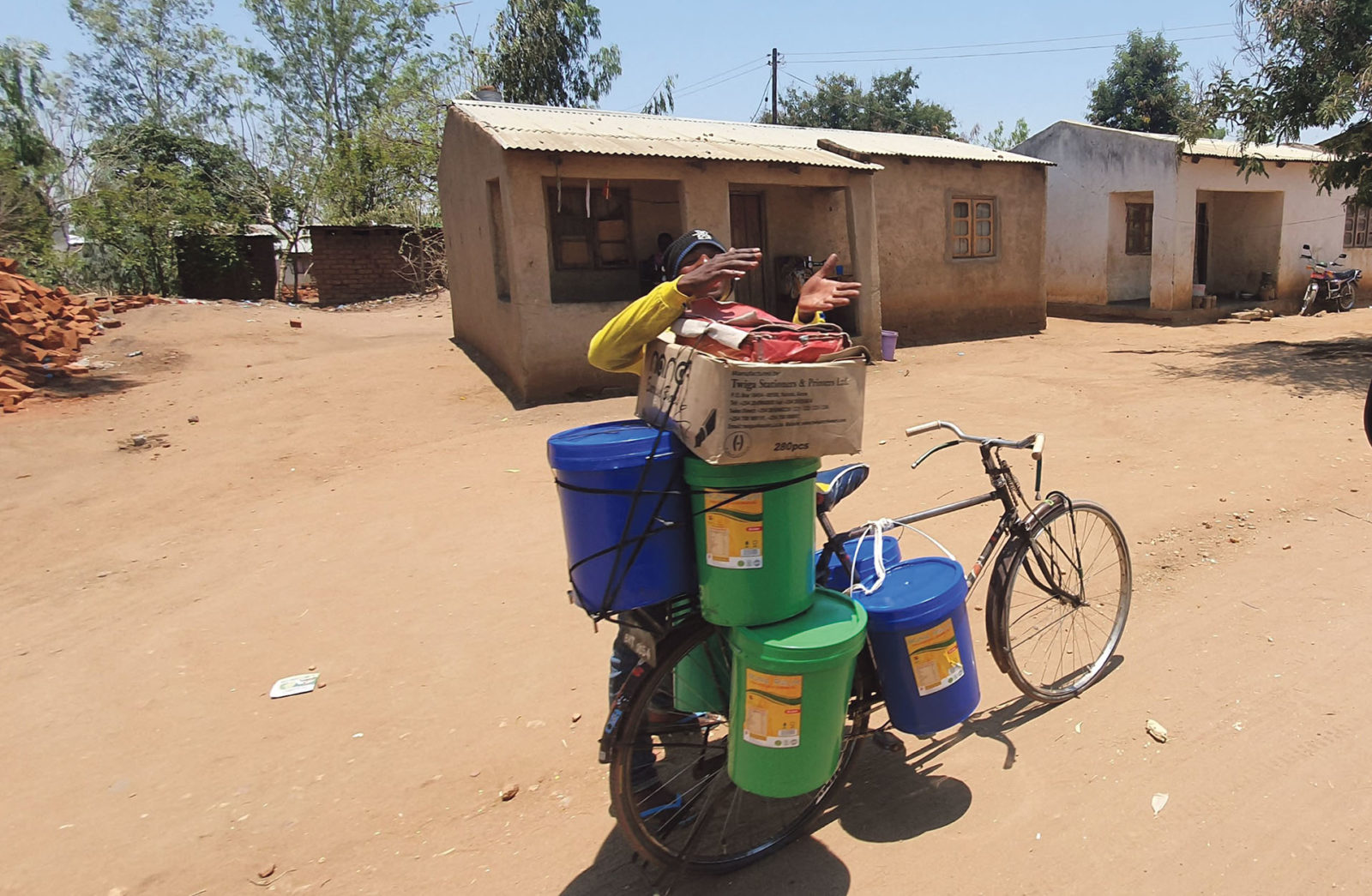 Turning things around in Malawi, where the population is projected to double by 2050, requires looking at the role of the state and business differently.

Thirty-seven years ago, I had my first look at the great Zomba Plateau from high up on the mountain. It was a mesmerising and memorable sight for a misty-eyed student, a great patchwork quilt of bright green farmlands and dense, darker forests.

From the mountaintop it seemed you were flying high over the most fertile valley imaginable. Today the vantage remains spectacular, but the view is quite different. The impressive expanse is now dominated by blinking malata – tin roofs. The region of Zomba, once the site of the colonial capital, has mushroomed more than threefold since 1985 to 750,000 people, parallelling the increase of the central African country’s population. A shade under 20 million today, conservative projections have Malawi’s population doubling by 2050 and nearing 70 million in 2100.

Put differently, in Malawi, which has the eighth highest birth rate worldwide, there is one birth every 45 seconds and one death every four minutes. With an average age of under 17, two-thirds of the population are under the age of 24. Something will have to change for Malawi to be able to productively accommodate this increase.

The mass of people on the roads is telling. Kabaza bicycle taxis wobble and weave their human loads through jammed markets and traffic. It’s a dodgem of flashing four-wheel drives, rumbling pantechnicons, beeping njinga ya moto – motorcycles, goats, vendors with tomatoes, potatoes and fruit, darting kids and milling people.

The road winding up from the Zomba Gymkhana Club at the foot of the mountain to the dam on top was once pristine rainforest, preserved by the iron fist and flicking white whisk of Hastings Kamuzu Banda, who ruled for 30 years from independence. Now the ribs of hand-hewn maize fields encroach up the side of the mountain, the once dense undergrowth and many of the trees casualties of fires no doubt caused by hunters in search of field mice.

In 2013, I was invited to present to the full economic committee of cabinet in Lilongwe about the structural policy changes necessary for Malawi to not only keep up but also get ahead of the demographic curve. The arguments were waved away in disbelief: “We will never get to 40 million,” said the then president of the UN population projections.

It’s hard to preserve Malawi’s existing basis of jobs in agriculture. As one commercial farmer sighed, “My farm is a thoroughfare.” Petty theft is a daily struggle, a byproduct of poverty. Even riskier in the short term is the depression in demand for tobacco, the principal export and source of cash. Substitution into groundnuts, macadamia and other cash crops is one answer, and the tobacco companies are well placed to help this if they are inclined to do so, but the growth will have to happen, too, outside of an increasingly pressured land resource.

A warmer heart and stronger will to succeed will help but is not alone going to be enough to change course.

So far donors have not been part of the solution, despite their taxpayers’ generosity. Malawi receives more than $1-billion in annual aid, nearly as much as the national tax take.

Donor successes at job creation – rather than simply patching up problems – are few and far between. Indeed, they are nonexistent. This reflects problems of donor co-ordination, a reluctance to embed expertise in government, a disjuncture between foreign and local thoughts on the problem and thus ownership of the solution, and the tendency for donors to reflect their own domestic concerns on a Malawian agenda.

This can be seen in the funding of worthy workshops and earnest conferences on themes more relevant to Stockholm than Salima. It’s hard to be overly committed to gender sensitivity and multi-stakeholder engagement when faced with a daily struggle to survive. The extent of foreign direction rather than local ownership explains why donors like projects within spitting – and driving – distance of Lilongwe, Dedza, Ntcheu, Salima and Mchinji. And occasionally they break out into terribly bad ideas, which distort with disdain, when policy proselytising falls victim to ego and intellectual evangelism, such as the Millennium Villages Project (MVP), now a sad monument to a community briefly lifted up only to be left stranded when the donors departed as quickly and selfishly as they had arrived.

Like the woodcutter hauling the unimaginably large tree stump up Zomba on his back or the bicycle transporter balancing 80kg of mafuta (cooking oil), among other goods, through the mud tracks of Balaka, more than 70% of Malawians earn under the international poverty benchmark of $1.90 per day. It’s a life of unimaginable hardship, a bad hand in society’s great birth lottery.

Government is faced with a fundamental dilemma – of increasing mouths to feed and constituencies to manage, and very few resources to do so. The temptation is to try to spray money around as many projects as possible, borrowing here and there to top up government coffers, employing dollops of populism and nationalism to maintain support for the inevitably harder times ahead.

This juggling act is compounded by fractious politics and frail governance and delivery systems, with 240,000 civil servants a costly and irascible constituency, the default to rent-seek and undermine political authority. The answer for certain is not business as usual. The demographics mitigate against that.

It requires honesty in managing the country’s scant resources. It’s estimated that annual leakages in the previous administration of then president Peter Mutharika’s Democratic Progressive Party (DPP) were not less than $80-million. The DPP was neither particularly democratic, as it turned out, nor especially progressive.

It demands deciding what not to do as much as what to focus on, a political task if ever there was one. It requires getting government out of business – why, for example, should government be in the hotel business, holding a 76% stake in the largest national chain? This necessitates thinking about the role of the state and of business differently. It is the role of government to enable business, not to substitute it.

It will require more than poverty alleviation. Thus, crop subsidy schemes, inevitably politically attractive but a messy corruption pit, will have to give way pretty pronto to the market – at home and in the region through exports – if maize production increases are to be both sustainable and lucrative.

It means ending the pernicious per diem culture, which destabilises government administration and corrodes the fiscus. Smarter use of technology can help government efficiencies too, both in raising revenue and reducing corruption. The basis for this already exists in the national ID card.

It means transforming government’s role as one of a catalyst and regulator, not an investor, what President Lazarus Chakwera describes as his Productivity Agenda.

New energy projects, for example, will have to be led by the private sector. It’s not just the macro-energy generation projects either; it’s the freeing up of the licensing structures at the bottom which will encourage trade in LPG that will, in time, reduce deforestation.

Malawi’s transport costs are the highest in Africa, and not only because it’s landlocked and poor.

All of the above entail reinforcing the rule of law. This is Malawi’s greatest asset, as the decision by the courts to stage a rerun this June of the abortive May 2019 election shows. This ethos and integrity will need to be extended into public administration, starting by eliminating 599 of the 600 existing government bank accounts.

And it requires the donors working differently, at least if they want to ensure Malawi moves from survival to prosperity, and if they can break out of their self-satisfied operational stasis.

This, too, demands a large dollop of self-scrutiny that can only conclude: no one donor has been particularly successful at economic development. That is the only honest place from which to make a fresh start. Failing that, donor delusion will reign, and expect more MVPs and Big Aid pushes, perhaps even a Marshall Plan or two alongside gender workshops and governance colloquia.

More than anything, turning things around in Malawi requires acting decisively today for tomorrow. DM168

Dr Greg Mills has been working in Malawi. www.thebrenthurstfoundation.org