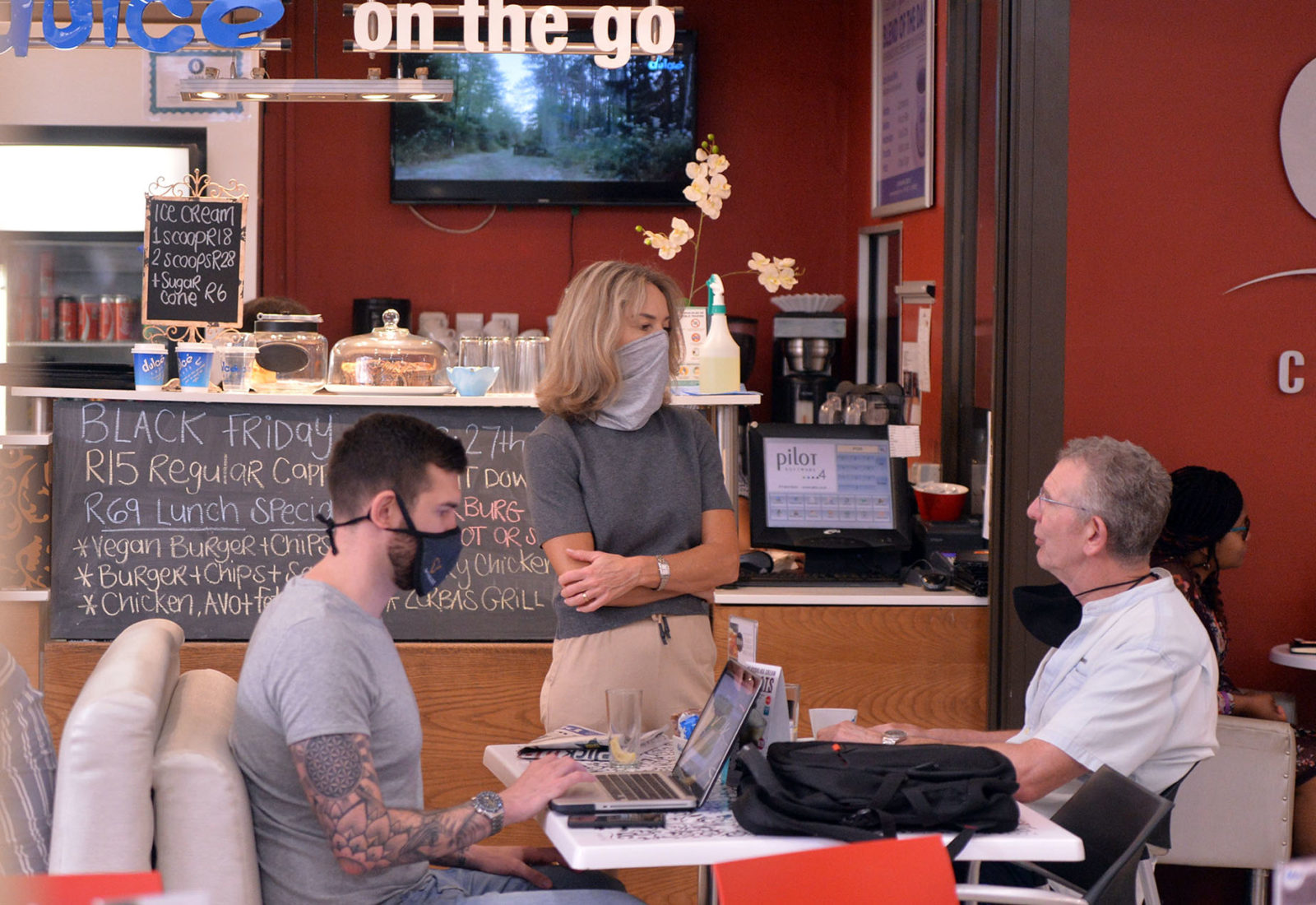 At hospitals in Nelson Mandela Bay the grief is overwhelming. The quiet resolve of tired medics is punctuated with sadness as their colleagues and patients are taken by the virus. Grieving families are stuck in limbo, barred from being with their loved ones. Even with more than 1,500 dead, the bars and malls are full. Many in the city struggle with lives cut short; many carry on as if there is no tomorrow.

If ever there was a moment at Livingstone Hospital when hope of making it through the Covid-19 pandemic faded away altogether, the moment when something shifted from a bad season to a disaster, it was this.

The news broke on Sunday. Sister Colleen Swigelaar had died because of Covid-19.

Sister Swiegie, the ruler of the Accident and Emergency Unit. Stalwart nurse. She of the steely-eyed looks that reduced the most hardegat gangster to silence. A woman who could, by sheer range of vocabulary and tone, bring order to a chaotic casualty unit. Covid-19 took her.

For many doctors and nurses the brutality of the past eight months, the deaths, patients anxiously fighting for breath and eventually succumbing to the virus, bereft families who see their loved ones for the last time at the doors of the ambulance or the hospital, all came crashing down. The frontline was barely holding.

With nothing else they could do for her, her overworked colleagues started bringing flowers to the supply cupboard. They lit a candle and made a handwritten sign. RIP.

The woman was a legend. Her colleagues started swapping stories. “One month-end weekend when the shit had hit the fan there were many shootings and stabbings. It was already 1am in the morning. We brought in a guy who had been stabbed in the abdomen. His intestines were on the outside of his body. The family was going nuts. Security could not handle the situation. There were gangsters involved. The doctors were young and panicking. And then Sister “General” Swigelaar arrived. The family calmed down. The work was done. She was a machine.”

As part of the team fighting Covid-19 at the city’s designated hospital, she and hundreds of nurses in the province spent the past eight months holding the front line against the virus. By 25 November, 1,682 would have been infected and 36 of them would be dead.

The statistics are devastating. In eight months the virus claimed 1,599 lives in the city’s hospitals, up to Tuesday night, and another 36 by Wednesday lunchtime – when the provincial command council met. In the city’s graveyards the diggers are getting lists to do 10 graves at a time.

With every epidemiological report filed by the teams of infectious disease specialists, the warnings became more serious. “The re-emergence of SARS-Cov-2 was driven by poor compliance with the regulations by the communities, which includes failure to wear masks in the public, lack of social distancing, and routine hand washing or sanitisation. The unbanning of liquor sales and opening of the taverns, unsupervised funerals have become public health risks, which may contribute to the spread of the disease. This continues to threaten the public health interventions and reverse the gains, which have already [been] achieved,” the latest missive read.

But at the state hospitals doctors know that it is now too late for education.

“What you should tell people now,” one said, “is that we are under-prepared and people will die. We have been warning since October that something is going very wrong here. Nobody listened. We watched the cases become more and more.

“We had to make our own plans, but by now, you know, it was like using two sticks to light a fire. It is too late now.

“People are bringing their loved ones to the hospital and we go out to find that they are dead already. I don’t swab all the dead people to test for Covid-19 — it is too difficult with some of the bodies.

“Some who come here you can see by their files that they have never been admitted before. They are scared. They are people with nothing. We try to help them but they come too late. We give them oxygen and then we do what we can but you watch how they fight and fight and fight for every bit of air. You see them getting tired and you watch them die.

“The intensive care unit is full.

“In July, we had to climb over the dead bodies at Dora Nginza Hospital to get to the oxygen. They only came to help us when it was almost too late. Now they are here again but we have almost finished our battle. They forced us to move to a renovated ward because the minister was coming. We didn’t even have phones. We had to buy the nurses airtime. One of the managers lent us one of her extra phones. We are still trying to make a space for us to work.

“We have no staff so we had to steal from the other units. I don’t think we ever planned or expected a pandemic like this. All the neglect of the past at my hospital made the situation critical. The government should never have started with this thing of Level 1. It confused people. They thought the virus was gone. We want people to put their trust in public health. People value consistency. We are all connected. That is why this is so hard,” she said.

Businessman, socialite and model Theo Klaas is also in isolation after testing positive for the virus.

“It makes me anxious to think that I might not be able to access help. I have not been oblivious to contracting it. I don’t know where I got it from. Now all I can do is take my vitamins and wait. The last time we were addressed by President Cyril Ramaphosa I thought he would put Nelson Mandela Bay in lockdown.

“My family live in a hotspot, in KwaNobuhle. It is a busy and big township. Since we have been on Level 3, the people of this city took the threat level down to Level 0. Shopping malls are always packed.

“Now people are dying. Livingstone Hospital has saved so many.

“A few days ago I started getting a fever. I had to get up three times a night to change my pyjamas and my bedding. I was sweating so much. I was so anxious I had to get sleeping pills to sleep. I am an outgoing person. I like the coffee shops. I like seeing people. Now I feel like I am in a prison.”

‘He was on his knees begging’

Mike Gatenby is waiting for his dad’s ashes to come home.

Aged 84, Barry Gatenby died at the field hospital on Sunday. Three weeks earlier he had lost his wife.

“He was holding up,” Mike said.

Barry tested positive for the virus on Friday, 20 November 2020. On 22 November Gatenby got a call that his dad was struggling to breathe.

“I called Wesley Bester from Besmed Emergency Services to get an assessment done and if critical take him to hospital; he is on a medical aid.

For the next hour Bester would drive around to find a hospital that could admit his critical patient.

“He argued. He was on his knees begging. He was running out of oxygen in the ambulance. The hospitals were on full divert. Finally he managed to convince the field hospital to take him.

“I got a call from a lovely doctor who assured me, saying he was doing better, he was on high-flow oxygen. They said we must bring his phone that he can speak to us.

“The last time I spoke to him was on Monday. By Tuesday he was dead. We got a call from one of the private hospitals to apologise for turning my dad away, saying it was not supposed to work like that.

“Then we got a call from the field hospital to say that he had passed away. Next we got a call from the private hospital to say they checked on him and he was improving. It took me the worst hour and 10 minutes of my life to trace the number of the field hospital. They said we must send the undertaker to fetch his body but the undertaker said he doesn’t identify patients, he just gets them in a sealed body bag.

“I finally found the nurse. She said she was looking after him.

“‘The lovely English gentleman with the blue pyjamas… he passed away,’ she said.

“We tried to protect them so much. They were frail.

“On the few occasions that he left the house with us we wouldn’t let him out of the car. I really don’t know where he got the virus. We all tested negative. His care-

giver tested negative. All I can think of is that it was some inconsiderate bastard who coughed near him without wearing a mask. People are dying and some here are still calling it the seasonal flu.

“I have to come to terms with the fact that I will never see him again. He is coming home as a box of ashes. We are all just hanging by a thread.” DM168