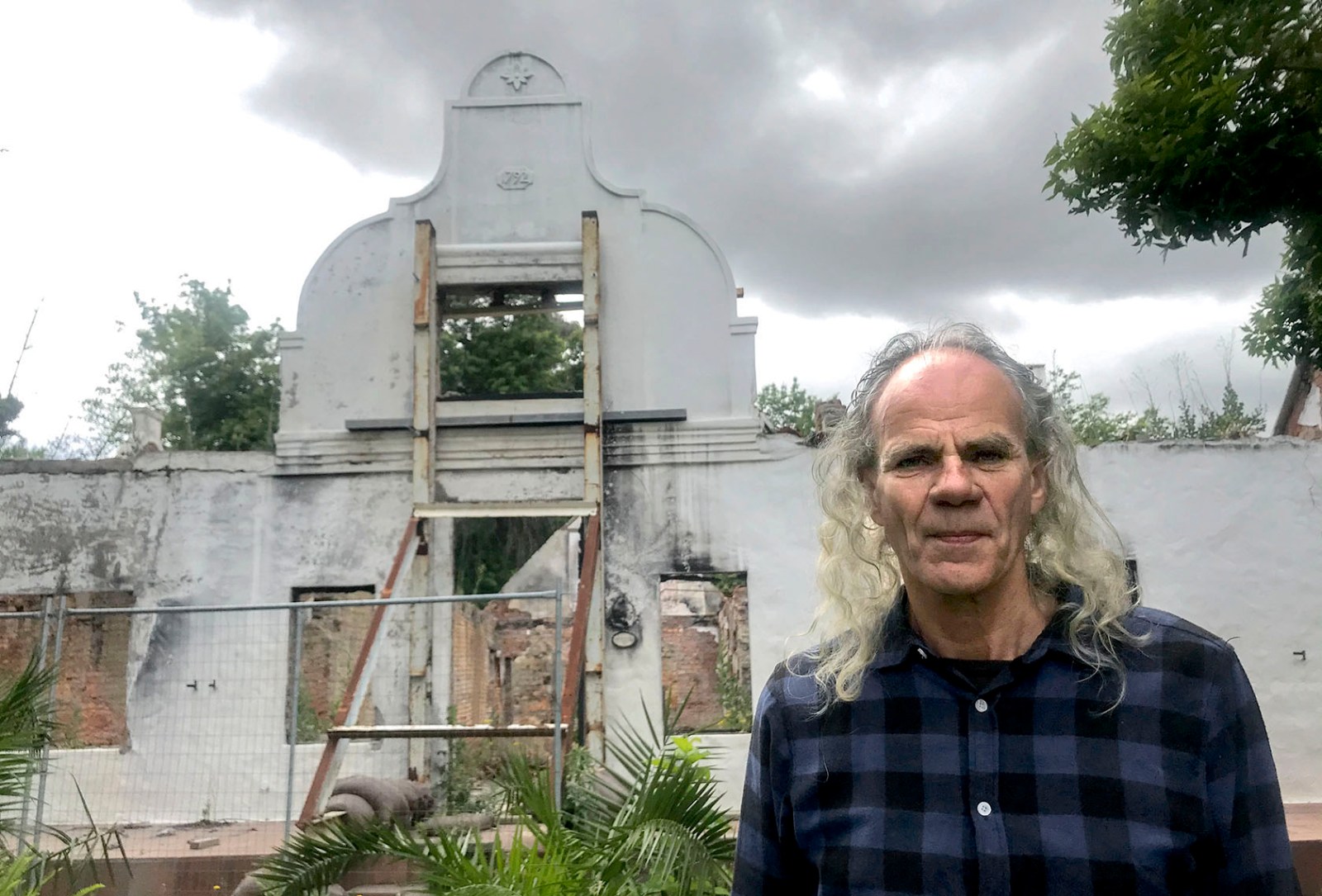 A fire-damaged farmstead in Paarl is the site of South Africa’s first official Afrikaans school.

At the foot of the Hawequas Mountains near Paarl, a slice of South African history is on the market for R8-million. It’s an urgent sale.

The Augusta Kleinbosch farmstead is home to the remains of Stellenbosch professor and viticulturist Abraham Perold, best known for developing the Pinotage grape varietal in South Africa in 1925. In the farm’s cemetery, an obelisk spire marks Perold’s grave. “1880 – 1930” reads the gravestone. The epitaph: “Deur Lyden tot Heerlikheid” (Through Suffering comes Joy).

The farm is also home to the Hugenote Gedenkskool (Huguenot Memorial School), South Africa’s first official Afrikaans school, opened in 1882. This was a gathering place for Afrikaans intellectuals pushing for sovereignty against British imperial rule; the birthplace of the first Afrikaans newspaper Die Afrikaanse Patriot (The Afrikaans Patriot).

Tours of the premises are free. The tour guide is Francois du Toit, probably a far-flung relative of the Du Toits who founded the farm.

Under an oak tree, Du Toit lights up his pipe. To his side jut the eerie remains of a Cape Dutch manor house, its gable is dated 1792.

“Actually this place is a sad story,” says Du Toit. “Who will restore it now? See, the manor house burnt down with the Paarl fires of 2017. Inside were our offices, the guest lounge. I lived there in the loft; everything I owned burnt; my books, everything. A very strong fire came at night. There was a strong wind; the fire just gutted everything. The fire brigade eventually said to us to leave the farm. It was total destruction. I lost 3,600 CDs. Of course, these can be replaced. But I’d kept a journal from the age of nine, which I lost. That’s irreplaceable, you know.”

Du Toit (64) is tall and gangly with a limp, which he conquers with each stride. He is a writer, with historians on his father’s side. Patiently he answers a salvo of questions.

He explains that all the farm’s buildings with thatched roofs, including the manor house, were decimated in the fire. The double-storey Victorian memorial school had a metal roof and could be saved.

Inside the school’s upstairs classroom, luminous alumni gaze from the walls. They include Perold; Jacob Daniël du Toit, who wrote under the pseudonym Totius, and who translated much of the Bible into Afrikaans; and DF Malherbe, the first professor of Afrikaans at Stellenbosch University and translator of several Shakespearean plays into Afrikaans.

Here, Du Toit makes a startling revelation. His eyes glint. “People get very angry when I say this. See, this memorial school may be the first official Afrikaans school. I say first ‘official’ [school] because there was also an Afrikaans school in the Bo-Kaap, at the Auwal Madrassah in Dorp Street. Muslim people built this school to teach their children. Afrikaans was actually first taught in the Bo-Kaap, by learned people from the East. These people spoke Arabic, but taught in Afrikaans. So these first Afrikaans scripts were written in phonetic Arabic.”

Research leads to Cape Town scholar Achmat Davids, regarded as South Africa’s “doyen of Cape Islamic Studies”. Davids’ pioneering research into the linguistic genre “Arabic-Afrikaans” is contained in his book The Afrikaans of the Cape Muslims from 1815 to 1915, published in 2011. However, as Davids passed away in 1998, the book was compiled posthumously from his manuscripts by Hein Willemse, professor in the Department of Afrikaans at the University of Pretoria, and Suleman Dangor, then professor of Islamic Studies at the University of KwaZulu-Natal.

Willemse is quick to respond to my query. Over the phone from Pretoria, he sheds further light. While Afrikaans undoubtedly stems from Dutch – the South African government first recognised Afrikaans as a language separate from “Dutch proper” in 1925 – conventional history overlooked large parts of its formative years.

“The history of Afrikaans is the history of the melting pot of the Cape colony,” says Willemse. “There were the European settlers, the slaves they imported from South East Asia, mainly from Malaysia, Indonesia and Java, and the native people of the Cape, like the San and the Khoi people. Afrikaans originated from the interaction of all these groups.”

He points out that at the beginning of the 19th century, there were about 18,000 people in the Cape, 7,000 of whom were European settlers. Hence, even though settlers wielded power, indigenous people and slaves far outnumbered them, with more mouths developing their version of the language. Thus a significant South East Asian influence remains detectable in Afrikaans today, with the Bo-Kaap dialect a homage to this heritage.

“The Afrikaans dialect ‘djy’ instead of ‘jy’ (‘you’) is very much a remnant of the South East Asian influence,” says Willemse. “Think of the city Jakarta in Indonesia. In South East Asia it is pronounced the same way as ‘djy’, ‘Djakarta’. Also, the Cape Muslims used instead of ‘dankie’ (‘thank you’) the word ‘tramakassie’, a local adaptation of the Malay for thank you, ‘terima kasih’.”

On the topic of South Africa’s first Afrikaans teachings, Willemse relays that the oldest surviving Afrikaans document is an “Arabic-Afrikaans” Islamic scripture dated 1869, circulated at Bo-Kaap mosques. It was written by Abu Bakr Effendi, an Ottoman Sheikh ordered to Cape Town by British Colonial authorities to teach the Muslim community. There were earlier Arabic-Afrikaans works too, says Willemse, but with no surviving copies.

But what exactly is Arabic-Afrikaans?

Willemse explains: “It’s not that difficult. Every language is made up of sounds. So Effendi took the Afrikaans sounds and represented them in Arabic symbols.”

Copies of Effendi’s first scripture are kept at the University of Pretoria and at the National Library of South Africa in Cape Town. Examples of later scriptures by Islamic teachers can still be viewed today at the Two Palms Mosque in Cape Town’s Loop Street.

Back at the memorial school, Du Toit leaves the classroom, descending a steep wooden staircase. Two small, barrel-shaped dogs, Roxy and Ollie, plunge at his heels.

Outside, Du Toit is pensive: “The sad thing is, before apartheid people kind of got on. Before apartheid, there was segregation, but not forced segregation; more cultural segregation, people sticking to their own kind. But couples intermarried, and children from different races played together. Five generations back, one of my great-grandmothers was a Malaysian lady. My grandfather married a Malaysian woman. People come with a lot of nonsense, but we are all mixed, basically.”

Puffing on his pipe, Du Toit asserts his roots. “I’m twelfth generation African. Why can people call themselves American and Australians, but I’m not African? The fact that my ancestors made mistakes does not make me any less African. People are strange. I’m South African, and no one can tell me that I’m not.”

Du Toit’s tone is calm. Within the conservative Afrikaans paradigm of his youth, he was an outlier himself. “Myself, growing up gay in an Afrikaans community, in Villiersdorp, they wanted to expel me from school. You know, in those times, the mayor and the church minister were automatically on the school board. But I got away with a lot; I mean, I had my first boyfriend at 14. I wasn’t very effeminate, but if someone asked me if I liked guys, I would say ‘yes’. I was very fortunate, though, I never felt discriminated against. I just never reacted. Maybe I was too stupid.”

Ulrich Froese, head of German hospital group Augusta Kliniken, and a descendant of French Huguenots who fled Roman Catholic persecution to Germany, bought the historic farm in 2000. He named it Augusta Kleinbosch Guest Farm, lovingly restoring the old monuments with the help of donations.

Now, due to ill health, and after struggling with Heritage Western Cape for the necessary approvals to repair the 2017 fire damage, he is selling.

Prime Invest Realty is handling the sale of the property, with its 50 olive trees, Sauvignon Blanc vineyard and natural fountain. “Historic farm damaged in the 2017 Paarl fires,” reads its website.

It adds: “Historic farm with a boutique hotel which closed in January 2017 due to a fire damaging the main homestead… All furniture in the guest rooms and farming implements included. Very reduced price for a quick sale. Do not miss this excellent opportunity.”

Asked about the historic significance of the farmstead, Willemse responds: “The history of Afrikaans is often seen as a confrontation within itself. The Afrikaner Nationalists gave this farm a special significance, and for some it will hold a certain sense of nostalgia. Today we understand it within a broader historical context. Either way, we should safeguard what we have. These monuments are elements within South Africa’s broader history.” DM168