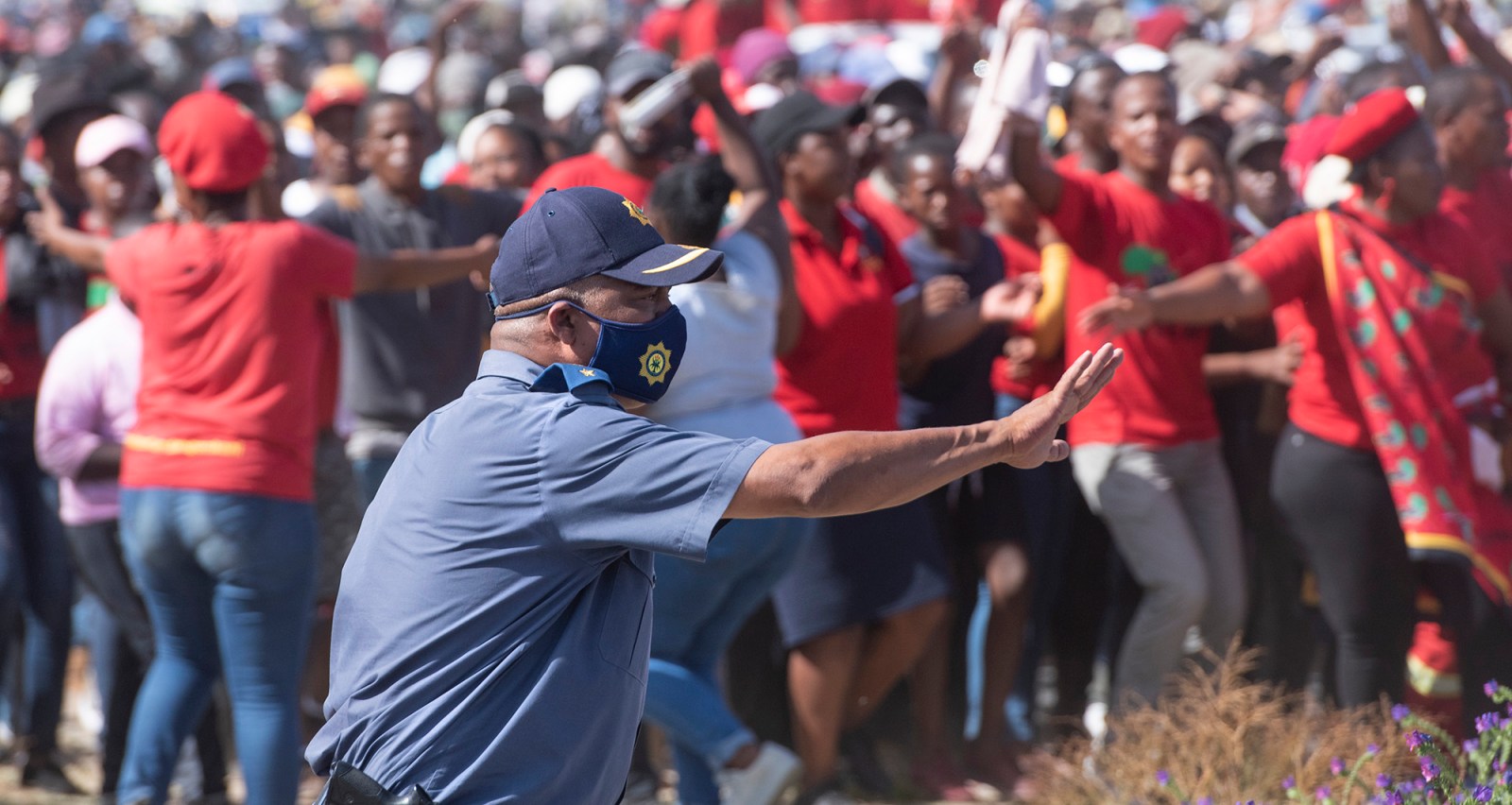 The Economic Freedom Fighters' Cape metro region marched in the suburb of Kraaifontein on Friday over issues including public transport, evictions and crime. They faced off with cops at the local police station, demanding that the next commander not be a white person. This comes after tensions between the EFF and police heightened this week.

Facing a row of police holding shields and blocking the entrance to the Kraaifontein police station in Cape Town, hundreds of EFF marchers cheered as one of their leaders said they did not want another white station commander.

Friday’s march came amid simmering tensions between the EFF and police, as well as between the party and the City of Cape Town. Kraaifontein is in Cape Town’s northern suburbs, the same area where EFF protesters and police clashed in Brackenfell a week ago.

Several hundred EFF supporters gathered along a main road in Kraaifontein early on Friday. Some were seen carrying golf clubs and long sticks. They were closely monitored by dozens of police.

A water cannon was standing by and at one stage a police helicopter hovered overhead. During an initial tense moment, a police officer was overheard calling for more guns and ammunition.

The march began near an informal settlement where gang-related graffiti was scrawled on some of the walls.

The group marched to the Kraaifontein police station, then to a clinic and on to the municipal offices. At each stop they made several demands which they wanted met within five days.

At one stage, before the sprawling group started marching, an apparent leader asked them to hand over any weapons, like sticks, they had. This was done.

While some marchers wore masks and buffs, many did not heed Covid-19 safety protocols (see photo below).

At the police station, heavily guarded by dozens of officers, a list of the party’s demands were read out.

EFF regional chair Unathi Ntame said the Kraaifontein community had grown and there were not enough police to attend to all the complaints.

He also referred to the “racist and rude attitude” of those working at the Kraaifontein police station and demanded that a certain Major-General Van Niekerk be forced to go.

This appeared to be a reference to station commander Gerda van Niekerk.

“We don’t want this police station to be headed by a white person any more,” Ntame said.

EFF leaders thanked police for allowing them to march, and thanked their members for doing so peacefully.

Police stationed themselves outside the municipal building, the final stop for the march.

Ntame issued a number of complaints and demands to the City of Cape Town, including that not all informal settlements had access to water and that there were sanitation problems with blocked drains and poor toilet facilities.

Ntame claimed “the racist City of Cape Town” had “switched off the lights” after EFF members began taking land that “rightfully” belonged to them.

He accused the metro police of harassment and, insofar as public transport was concerned, he wanted trains properly maintained for residents.

The EFF in Cape Town also wanted taxi operators to be issued with permits and impounded taxis to be returned to owners within five days or “the mother of all marches” would be held.

In a tweet publicising the march on Wednesday, the EFF Cape metro said that since the City of Cape Town wanted to shut down the party’s activities in the city, it would push ahead with the Kraaifontein march.

Tensions between the EFF and police arose last weekend when Julius Malema reportedly said that if police wanted a fight, they should declare it.

In a statement issued in response, police minister Bheki Cele pointed out that Malema had also said: “We will treat them [police] the same way we treated them in the 80s… we will not only fight them at the picket lines, we will go to their homes and fight them in their own houses with their own families… We will come for you one by one at your own comfort zone.”

Cele warned that this type of incitement was illegal.

“As a political organisation, the EFF and its leader have every right to express their views on the government of the day. However, the threat to the lives of the police, their loved ones and their homes won’t be tolerated or allowed to happen,” he said.

In a statement of its own, the EFF described Cele’s statement as “empty and grandstanding.”

“The commander in chief [Malema] simply reiterated a long-held position that the patience of our people, with a police force that resembles that of the Apartheid state, is wearing thin,” it said.

“If the current regime makes the suppression of differing voices through guns, teargas and water cannons law, we will confront them directly. Police must never be regarded as immune to confrontation and activism, should they make it their duty to brutalise those who stand for justice.”

A week ago the EFF protested outside Brackenfell High School to highlight incidents of alleged racism at the school. This ended in chaos with police firing stun grenades and teargas.

On Monday the City of Cape Town said it planned to institute a civil claim to recover the costs of damages to municipal property caused during the EFF protest. “Preliminary reports indicate a fire engine was torched, roads and traffic lights were damaged, and a field was set alight by EFF protesters,” it said. “Car dealership windows were smashed… with private vehicles damaged due to stoning and several shops looted according to reports.”

Cape Town mayor Dan Plato said the EFF had made it clear they had no regard for the law. “I want to assure the public that we will not tolerate lawlessness in this city and the EFF will be held accountable for the damage caused,” he said. DM