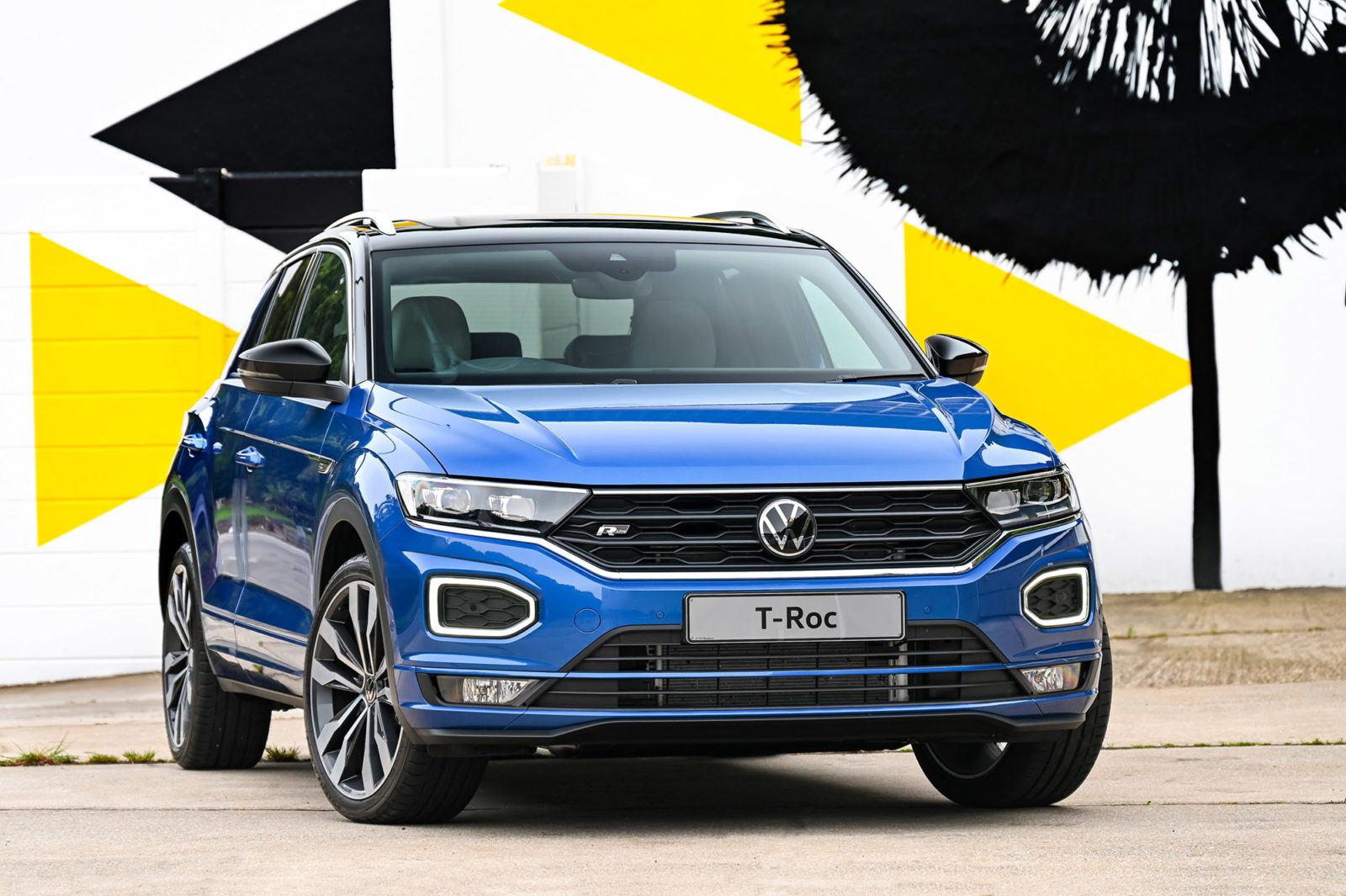 The much anticipated VW T-Roc, an addition to VW’s SUV family. (Photo supplied)

Despite coming late to the crossover SUV party, the new Volkswagen T-Roc has triumphantly landed in all its colour-coded glory.

Having been involved in the motoring media industry for more than a decade, I have attended hundreds of car launch events. Unveiling a vehicle to the market is more often than not accompanied by a hugely expensive marketing campaign where think tanks, who’ve been huddled up in boardrooms for months, come up with all sorts of weird and wonderful ideas to convince both the media and consumer that said product is the next best thing to the Covid-19 vaccine.

When it comes to brand ambassadors, it feels like I have seen it all – from stand up comics, to vacuous actresses, to drugged up RnB performers, to beefy sportsmen – parroting praise for a vehicle when you know they are just waxing lyrical because they’ve been offered a fat pay cheque. So forgive me if I’ve become somewhat jaded when it comes to believing in the authenticity of these campaigns.

On Monday I attended the national launch of the much anticipated VW T-Roc, an addition to VW’s SUV family which now consists of the top of the range Touareg, All Space, Tiguan, the T-Roc and the T-Cross (launched in September last year).

I learnt that Volkswagen had come up with a campaign, hashtagged #DrivetoDefy, partnering with local trailblazers to get their message out that the T-Roc is a vehicle that is “a highly individual drive that defies conventional boundaries”. Did I mention that I was feeling somewhat cynical?

So I was unexpectedly thrown off balance when at the press briefing a short film came up on to the screens in the conference room, emotively telling the story of Major Mandisa Mfeka, intercut with childhood images of a girl curious about planes and her defiant journey to becoming South Africa’s first black female fighter pilot.

I had followed Phetla’s stellar career and so when I noticed that Ms Phetla herself was in the room, I had to pull back a gear or two, reminding myself that I was there to drive a car – a compact crossover hatchback to be precise – and not fangirl on a tutu.

The crossover segment, along with more traditional SUVs, has seen astronomical growth globally over the last decade, all but heralding the slow death by numbers of sedans, coupés and cabriolets. Between 2015 to 2019, the local SUV market increased by 44%. International motoring experts estimate that the global compact SUV segment will double in size over the next decade.

The reasons are pretty obvious: these vehicles are targeted at customers looking for higher ground clearance, extra storage, better driver visibility and general safety. In South Africa, this segment has done particularly well among a local adventure-loving market, and with ever increasing potholes and poor road surfaces to contend with, crossovers and SUVs have much to ride home about.

Despite coming rather late to the crossover party, (the Nissan Qashqai launched back in 2006), after spending two days with VW’s newbie, I have little doubt that the T-Roc is going to appeal to this market on a number of levels.

Being a bit of an attention seeker myself, I was interested to know more about this T-Roc-ker target market. According to VW (and I am sure a lot of time and money went into coming up with that phrase), “It’s for those who choose to do the things they desire. They’re disruptors in their own right, but are still grounded in community. They strive for fulfilling working lives, spend time researching purchase decisions, are passionate and knowledgeable about vehicles and seek quality over quantity.”

So, enough marketing speak. What’s on offer in terms of the T-Roc’s engine and trim range? Customers basically have three choices. First up is the 1.4 TSI turbocharged (110kW, 250Nm) Design trim, mated to an 8-speed automatic transmission. Then there’s the more powerful 2.0 TSI (140kW, 320Nm) 4MOTION DSG transmission (with power going to all four wheels) Design trim and to top off the range, the 2.0 TSI 4MOTION DSG transmission R-Line. In simple speak, the Design trim focuses on styling elements while the R-Line is geared at upping sporty elements.

Described by the more cynical as a “beefy looking tall Golf”, the T-Roc is based on the Golf’s MQB platform also shared by the Polo, Audi A3 and Q2.

Offset by flashy chrome and stand out LEDs, the myriad of colour and design choices for the T-Roc made my brain go all dizzy. For example, the design derivatives come standard with 17-inch Mayfield alloys but can also be upscaled to 18-inch Montegos or Grange Hills. Design T-Roc-kers can choose between white, red and black on the roof and exterior mirror housings, which in turn can be paired with various exterior colours to give customers 26 different colour options. The R-Line derivative, which comes standard with 19-inch Suzuka alloys, is slightly more demure in colour choice with 21 different options. Do you see where VW is going with this?

Tech-wise (and of course Performance Seekers are married to their tech), the new T-Roc comes standard with the Composition Media radio and App-Connect, an 8-inch touchscreen and 2 USB ports, as well as connectivity via VW’s We Connect Go app.

The R-line, which of course is pricier, has a long list of standard features including Vienna leather seats, mobile phone inductive charging and Adaptive Cruise Control.

The standard driver assist tech is excellent if not class-topping. There’s Automatic Post-Collision Braking, Emergency Braking, Pedestrian Monitoring and Lane Assist, which does exactly what it says by keeping the vehicle firmly in the middle of its lane.

I was a tad worried that with all its bells, colour-combos and tech, the T-Roc may fall short when it came to actually driving it. On getting into both derivatives, I found the driver seat well positioned in terms of pedal, infotainment tech and steering reach, although some of my taller journo colleagues gribbled a bit about the backseat passenger room. I found the rear comfy and boot space of 425 litres adequate.

Both the 2.0 litre and 1.4 engines performed impressively on the twisty Grabouw mountain passes that were aplenty on our drive to and from Gansbaai. The 2.0 litre’s drive dynamics are exhilaratingly punchy and gear changes through the DSG gearbox are suede smooth. But the surprise of the day was the 1.4 litre with 30kW less power than the top of the ranger. I hardly noticed the difference in drive and power and at more than R100k cheaper than its flashier brother, it’s undoubtedly my pick of the pair. We hit some of the worst weather I have experienced in years on Sir Lowry’s Pass, with almost zero visibility due to the heavens weeping, but the 1.4 handled beautifully although its windscreen wipers were a tad slow for my liking.

Despite a year left in Covid tatters for the majority of motoring manufacturers, VW South Africa Passenger Cars has performed remarkably well, selling 42,354 vehicles in the first 10 months of the year with its passenger car market share increasing by 1.1% to 21.5% when compared to October 2019’s figure of 20.4%.

But I think most of us would like to see 2020 take a damn swan song. And so it was perhaps fitting that the T-Roc’s launch, held at the exclusive Grootbos Private Nature Reserve, ended with a performance of The Dying Swan by #DrivetoDefy brand ambassador Kitty Phetla in a twilight forest clearing, trees draped in fairy lights with a half moon hanging in the star-speckled sky.

And while I knew that this was all part of a marketing campaign, I didn’t expect to feel so emotional as Phetla, in her black Dying Swan tutu, pirouetted and jetéd on a stage, draped in a VW logo. Embarrassed by my unexpected emotion, I wiped away a tear. I looked around. I was far from the only one wet-eyed under the Gansbaai night sky. DM