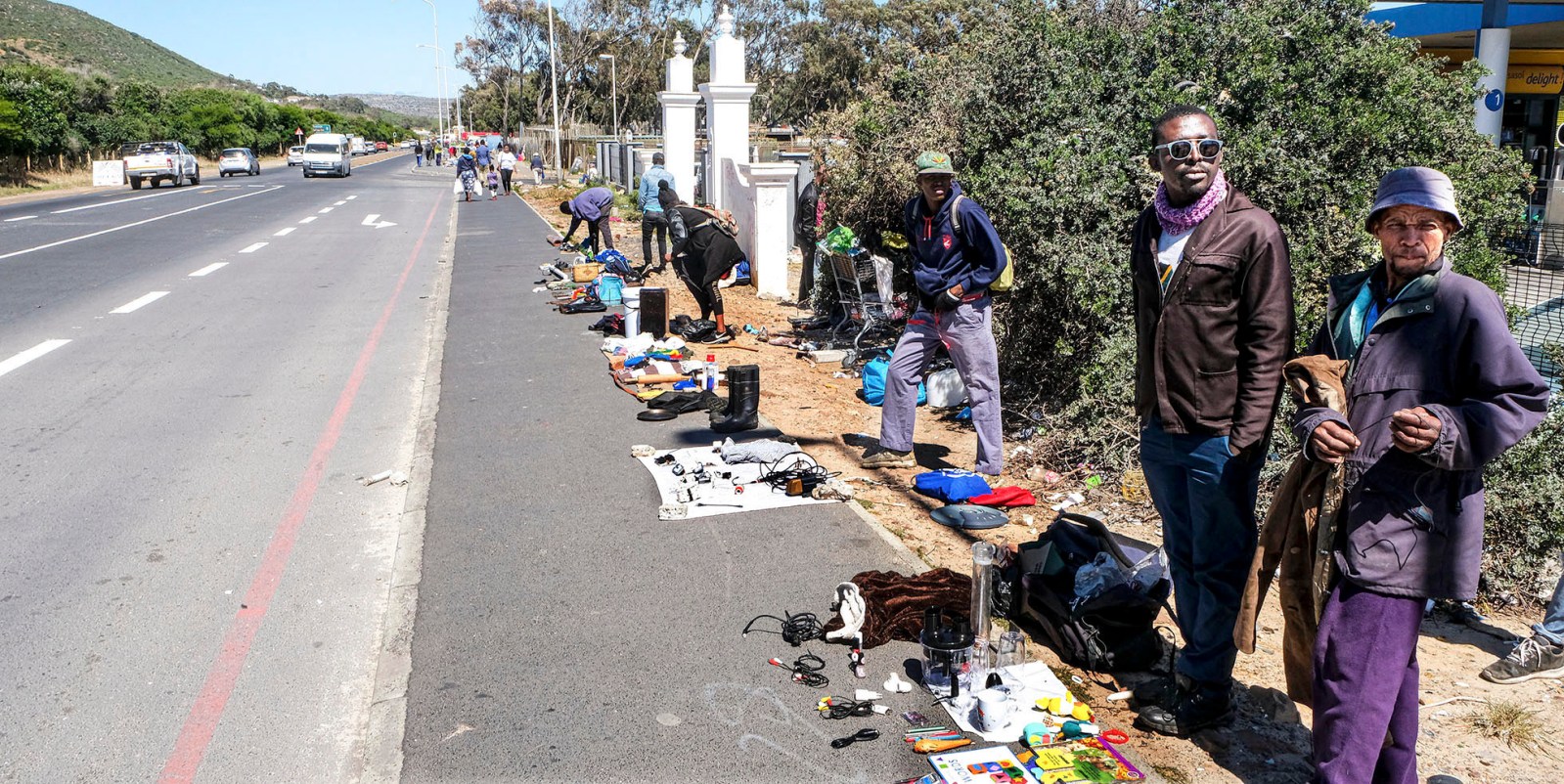 Lukhanyo Vanqa says fines from the city have not deterred him from trading or living on Kommetjie Road outside Masiphumelele in Cape Town's deep south. (Photo: Daniel Steyn)

At the entrance to Masiphumelele, a small township off Kommetjie Road in Cape Town’s deep south, informal traders sell wares in horrendous conditions. Assistance from the City of Cape Town has been virtually non-existent, while bylaws are enforced with hefty fines.

In the Kommetjie area, there is a stark contrast between the well-serviced public spaces of rate-paying areas, with good roads and manicured public lawns, and Masiphumelele, where potholes and litter obstruct the passageways between houses.

Its proximity to wealthier areas (Capri Village, Noordhoek, Kommetjie, Fish Hoek, Sun Valley) and industrial areas makes it an attractive settlement for people of lower-income levels. In recent years, Masiphumelele has expanded rapidly as job seekers have moved to the area and residents have voiced their concerns about poor service delivery and an uptick in crime and gangsterism.

The entrance spilling on to Kommetjie Road is busy on weekday mornings, as many pedestrians make their way to work. Here, informal traders have exploited the heavy foot traffic and set up shop all along the road. This strip of makeshift stalls stretches some 300m from Masiphumelele’s entrance to the Sasol garage.

It is undoubtedly an eyesore. Seemingly neglected by municipal maintenance and development, the area is littered and overcrowded. At the entrance itself, about a dozen traders are stationed in a small square where a large skip is overflowing with garbage.

“The residents come to dump their garbage here because of bad service delivery,” says Munya Chawasarira, pointing at the litter around his feet with distaste. Chawasarira is an informal trader who has been trying hard to advocate for better conditions for the traders with the City of Cape Town.

Most of the traders in the square sell fruit and vegetables. Other goods on offer include toiletries, cosmetics and hardware. There is also a repair shop, servicing a variety of mechanical wares from car parts to lawnmowers. Along the edges of the square, shipping containers have been converted into semi-formal shops and workshops.

All the traders Maverick Citizen spoke to cited the poor trading conditions and lack of permits, which make them susceptible fines and raids by the city’s law enforcement, as obstacles that prohibit them from developing as entrepreneurs. Historically the city has provided little support for the traders, Chawasarira tells us.

Instead of employing a developmental approach, which is mandated by the city’s informal trading policy, the city’s response to the situation has been to enforce bylaws. Fines average R500, says Sean Present, who sells pieces of clothing for R5-R10 each. He has never bothered to pay the fines, simply because he cannot afford to.

Ineffective as a deterrent, the fining of informal traders seems to only exacerbate the problem. It disincentivises traders from abiding by the law and potentially eradicates prospects for a constructive relationship between informal traders and the city.

For a group of traders who live among the bushes across the road from the Sasol garage, breaking the law is not a matter of choice, but necessity. Lukhanyo Vanqa is one, who sells second-hand electric appliances and other miscellaneous goods, most of which are sourced from landfills and trash cans.

Contravening several bylaws for living on the street, Vanqa and his friends are often searched and fined. While Maverick Citizen was there, we witnessed 10 City of Cape Town law enforcement officers in four vehicles arriving on the scene searching the area for stolen copper cables.

Other traders on the street have been fined for trading without a permit, although not since the start of the Covid-19 lockdown. One woman selling shoes, who preferred to speak anonymously, told us she has received no assistance or guidance on how to operate her business legally and effectively from the City of Cape Town. Instead, they have been issued fines, which end up unpaid.

Chawasarira tells us that he approached the city after someone, ostensibly a gang member, started scamming the traders for protection money. He says that this is still happening to some traders, but that most of the scamming stopped after he spoke to the city.

Chawasarira has since had constructive talks with the ward councillor, Felicity Purchase. He hopes that the city is now prioritising the upliftment of the trading area: a cement slab on which to trade, shelter from wind and rain, water and sanitation, and training that will help them develop as entrepreneurs.

Purchase is councillor of Ward 69, which includes Noordhoek, Sunnydale, Sunvalley, Fish Hoek, Capri, Kommetjie and Masiphumelele. She could not be reached for comment.

Mayoral Committee Member for Urban Management, Grant Twigg, told Maverick Citizen that the city has prioritised the development of a signature gateway into Masiphumelele. A Masiphumelele Urban Design and Informal Trading Plan Framework has been developed and submitted to Subcouncil 19, Twigg says.

According to Twigg, a professional firm has been appointed to implement the framework through modernisation of the area. In addition, day-to-day “operational interventions” with the local community, informal traders, and various city line departments have been taking place.

Maverick Citizen followed up and asked Twigg to give details on timelines. We will add his comment once he responds.

In response to the traders’ concerns about the skip and littering in the area, Mayoral Committee member for water and waste Xanthea Limberg says that the area is cleaned daily by the city’s Solid Waste Management Department and that various waste drop-off facilities exist for the convenience of residents and traders.

These interventions by the city seem to exist on paper more than in practice. Apart from Chawasirira’s positive discussions with ward councillor Purchase, none of the traders Maverick Citizen spoke to could attest to constructive consultations with the city. Maverick Citizen will be monitoring the implementation of the Trading Plan Framework. DM/MC