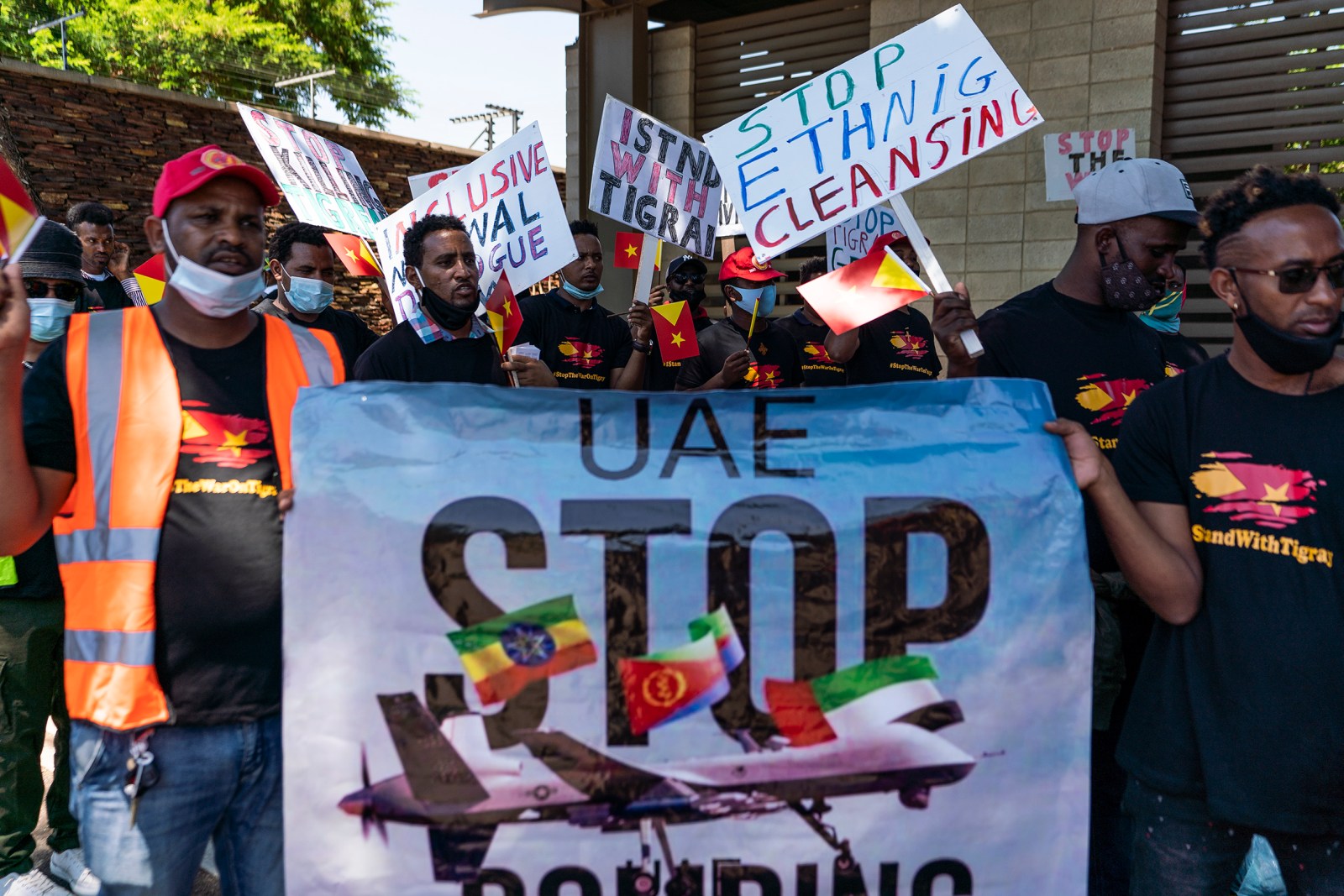 The group of Ethiopians gathered outside Department of International Relations and Cooperation offices in Pretoria carry posters and Tigrayan flags. A memorandum said that more than 500,000 people have been internally displaced in the Tigray region of Ethiopia while more than 40,000 had fled to Sudan in the past 21 days. (Photo: Shiraaz Mohamed)

A crowd of Ethiopians gathered outside the Department of International Relations and Cooperation’s offices in Pretoria to hand over a memorandum in the hope that President Cyril Ramaphosa would intervene to help put an end to the war in Tigray.

“Our towns are being raided and destroyed. Our women are being raped. Everything is destroyed. I am emotional, I cannot speak. I am very worried about my family. My six-year-old daughter lives with my mom and dad, I do not know if they are alive or dead.

“I heard my hometown of Adigrat is under heavy bombardment from the Eritrean army and there are a lot of airstrikes from the Ethiopian army. I don’t know what is happening there. I am worried. Even if my daughter is alive this trauma will stay with her throughout her life.”

These were the chilling words from Gideon Geb as he stood with tears in his eyes outside the Department of International Relations and Cooperation’s (Dirco’s) offices in Pretoria. Geb, who had travelled all the way from King Williams Town in the Eastern Cape, was one of many Ethiopians who gathered outside Dirco’s offices to hand over a memorandum in the hope that President Cyril Ramaphosa would intervene to help put an end to the war in Tigray.

Ethiopian Prime Minister Abiy Ahmed, who last year won the Nobel Peace Prize for his role in making peace with Eritrea, initiated a military offensive against the Tigray region on 4 November after he accused the region’s ruling party of attacking a government defence post and trying to steal artillery and military equipment.

The Ethiopian Human Rights Commission reported that 600 civilians were killed in Tigray on 9 November. The commission said hundreds of people were hacked, stabbed and strangled to death in an apparent ethnically based attack that could be considered as a war crime and a crime against humanity.

The large group outside Dirco’s offices carried flags of Tigray and placards with slogans on them. Among the slogans were: “Stop ethnic cleansing”, “Stop the war in Tigray” and “Stop killing our children”. The group gathered on a sidewalk close to the entrance where leaders from the Ethiopian Tigray Community of South Africa addressed them.

One of the leaders called out, “Stop the genocide, stop the war. People are dying, we are running out of time. Cyril Ramaphosa, stop the war, we know you can stop the war.”

The crowd chorused along. Calls were also made for a humanitarian corridor to be opened to assist civilians.

It said the Tigray community in southern Africa is unable to communicate with their relatives and family because of the blockage of the internet and other communication services. They are unable to send any money because all the banks in the region have been shut down. The memorandum demanded the opening of a humanitarian corridor and resumption of all services to the people of Tigray.

The memorandum was handed over to an official from Dirco who declined to make any comment as she said Dirco remained neutral.

Ethiopian Meles Tesfay said, “The federal government is destroying all the towns. There is no electricity. There is no food, no water and no internet. They are using drones to kill our people. We are here because we need more attention to be focused on what is happening to our people.”

Another community member, Tadesse Yemanne Berhei, said, “Government is controlling the narrative. All communication is being blocked. Journalists are not allowed into the country.

“The situation is worrying. I have distant family there, but that is not my biggest fear. My fear is that if this continues then the whole of Africa might collapse and this might cause great human suffering. Our neighbouring countries’ political climate is fragile and something like this can cause a great disaster.” DM