Proteas vs England: Straight-talking Rabada keeps the spotlight off cricket for now 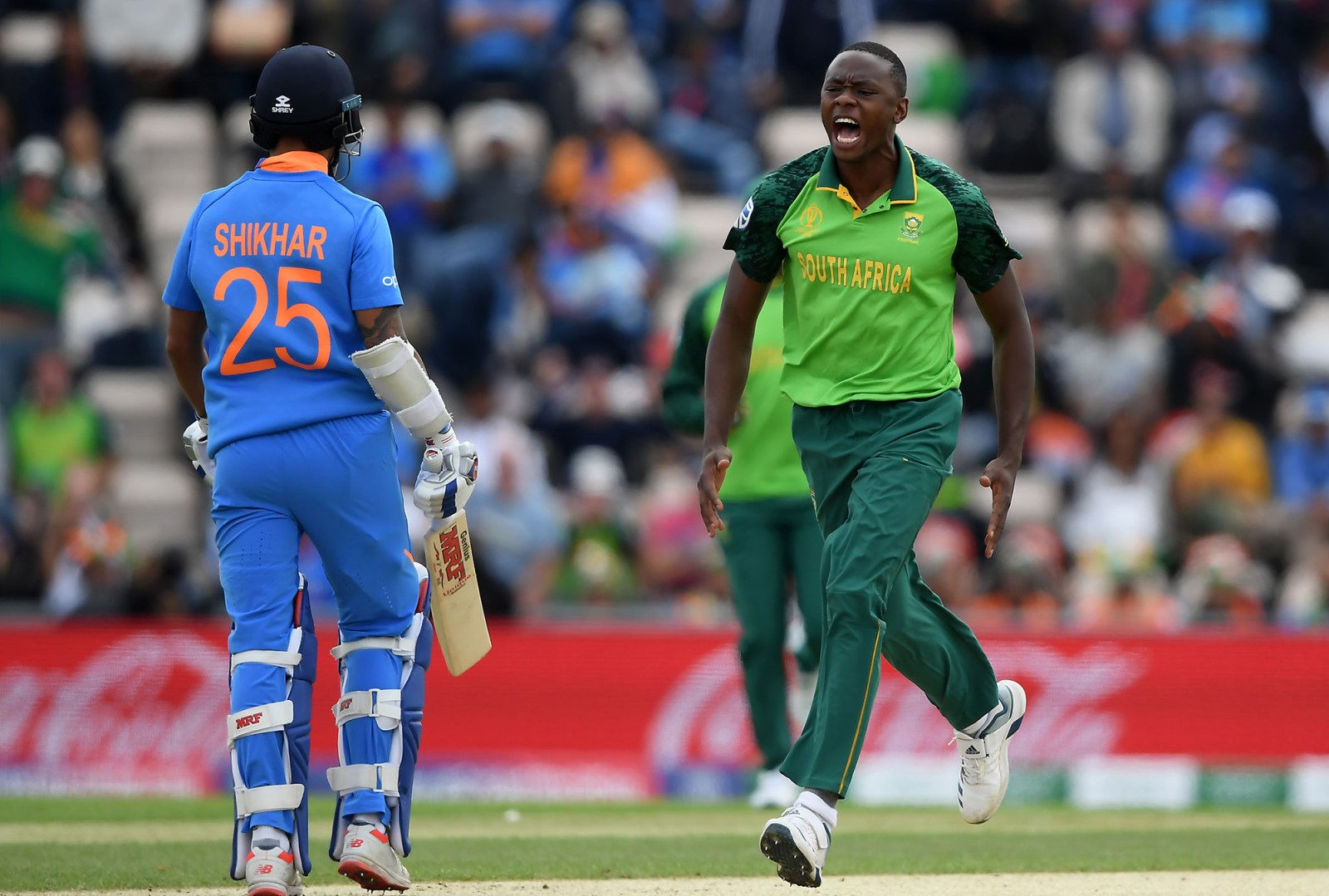 Kagiso Rabada of South Africa celebrates the wicket of Shikhar Dhawan of India during the Group Stage match of the ICC Cricket World Cup 2019 at The Hampshire Bowl in Southampton, England. (Photo: Alex Davidson / Getty Images)

As much as Cricket South Africa wants actual cricket to be top of the agenda after months of boardroom drama, Proteas fast bowler Kagiso Rabada ensured that other important issues are going to share the headlines.

Few people deliver a cricket ball with the pace, venom and accuracy of Proteas fast bowler Kagiso Rabada. And few sportspeople deliver as many eloquent and thoughtful answers on a varying range of topics as the 25-year-old strike bowler.

With the Proteas’ first matches since March just days away against England, the best white-ball team in the world, Rabada was thrust into the media hot seat. And he immediately revealed that this would be no causal cliché session as he fended a wide range of questions, some with aggression, and others with careful defence.

After the much-publicised leadership crisis in Cricket South Africa (CSA), England’s arrival and the expectation of six high-octane clashes should take the focus off administrators for a while and place interest where it should be, on the players. Not so fast.

But this has been no ordinary year in many ways. Besides CSA’s management issues, the global coronavirus pandemic has changed the sporting landscape and social justice causes have resonated with sportspeople like never before.

The Black Lives Matter (BLM) movement, which started in 2013 but gathered massive international momentum in the wake of the tragic murder of George Floyd by police in Minneapolis on 25 May 2020, was adopted by sports stars globally.

The images of Floyd begging for mercy as a white police officer blocked his airway with a knee on his neck, saw the BLM movement go far beyond America’s borders and touch sport in South Africa.

BLM has sparked intense debate and scrutiny of South African cricket’s own past. A camp for SA’s elite male players in late August was planned before BLM-related issues were raised, but the scope and focus of the gathering shifted in the wake of what had happened.

It’s unclear whether it was at that gathering, where coach Mark Boucher had his first squad meeting in months, or more recently, but a decision was made about how to react to the BLM movement when play started up again.

And the team have decided not to take a knee before play against England, which has become the universal gesture of solidarity for the movement.

Boucher made this clear last week. Fair enough, if that’s the collective position. After all, taking a knee for BLM is a personal choice and only the Proteas players will know the full context of their decision and whether it was unanimous or not. But Rabada muddied the waters by referencing other causes that they are standing for and hinting that it was a directive and not necessarily his own preferred choice.

“I will always stand for that, but it was a team decision not to kneel and to look at gender-based violence and devote ourselves to that cause. I’ll always believe in Black Lives Matter 100%. Mark (Boucher) has stated that the team will not be kneeling and that’s how it’s going to be.”

The response has raised at least as many questions as answers. In most cases it’s too much to expect players to be social justice police as well as international sports stars.

“There is huge responsibility in the things you say and the things you stand up for. We’ve seen the roles sportsmen had to play in all the political movements that were happening during the lockdown. I expressed my opinion on Twitter, and on some podcasts that we did, but I am not getting into it too hectically. I am not writing essays about it, I am not writing a doctorate about it, but I threw my two cents out.”

‘Living in a luxury prison’

Rabada was on more confident ground when the discussion centred on cricket. The difficulties of preparing under strict Covid-19 protocols, which were compounded when a Proteas player tested positive last week, and the mental strain of being in a bio-safe environment, are obvious hurdles players are having to deal with.

“The guys are getting in the preparation that they need to,” Rabada said “The team is doing well at sticking to the strict rules that have been set in place. It’s challenging and bizarre, but we’re training well and communicating quite well as a group.

“You’ve basically lost your freedom. It’s almost like luxury prisons that we’re in. But you have to remind yourself that we are fortunate. People have lost their jobs, people are struggling at the moment. So, I just try to remind myself that we must be grateful for the opportunity that has been given to us. First of all, to earn some money, and second of all to do what we love.

“We don’t get treated too badly. We’re staying in great hotels, we get the best food. It’s like a spoilt kid not getting what they want at the candy store. But it can be quite tough because you’re surrounded by four walls most of the time, and that can be a factor mentally. But just reminding yourself of all the good things that are happening should get us through.

Once we start playing it will take away from the desolate times.”

Fresh and ready to play

The lack of fans and atmosphere is something Rabada experienced in the recent Indian Premier League (IPL), where he starred with the ball. He was the competition’s leading wicket-taker with 30 wickets in 17 matches.

It showed that he was fully over a groin injury sustained playing for South Africa against Australia in February. South Africa’s intense lockdown gave his body time to heal, and he was fired up to face England again.

“The break helped to refresh the body and to take the mind off of a lot of things,” Rabada said. “But I don’t know if long extended breaks will happen in future because cricket is getting more and more. I’m not sure how much of it is due to a long break, but I don’t think it will happen a lot in the future. I don’t think we will get breaks that long unless we get Covid-20.”

The matches – three T20s and three One-Day Internationals (ODIs) in Cape Town and Paarl, will be played without fans in the stadium. Rabada views the situation as both positive and negative.

“The crowd plays a big role, but at the end of the day, if I’m running into Joe Root, or whoever, it’s a contest between me and him,” Rabada said. “The competition is high, there’s a lot at stake. It’s not easy, you can’t just run up and land the ball in a certain area. The crowd can get you going but nobody is bowling the ball for you.”

Thankfully, because few bowl the ball as well as Rabada. DM