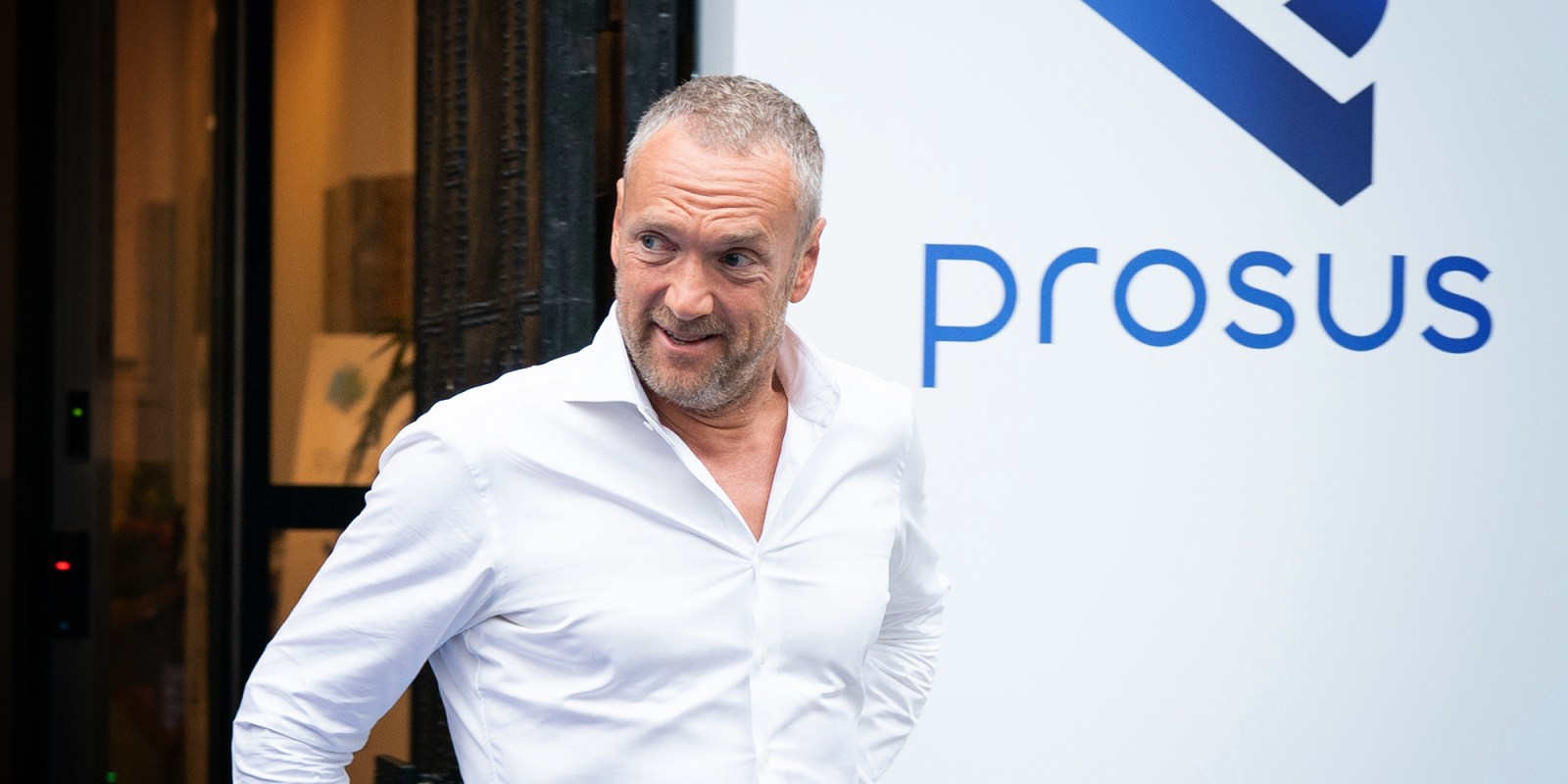 Bob Van Dijk, chief executive officer of Naspers, says global e-commerce sales grew as much in one month this year, as they have in the past seven years. This has been the impact of the lockdown. (Photo: Jasper Juinen/Bloomberg via Getty Images)

Covid-19 has made business operating conditions tough for all entities, including Prosus. But like Amazon, Google, Alibaba and Facebook, the internet firm has benefited from the lockdowns.

The global lockdown has accelerated the adoption of e-commerce around the world, and internet company Prosus is a thumping beneficiary of this trend.

Global e-commerce sales grew as much in one month this year, as they have in the past seven years. This has been the impact of the lockdown, says Naspers and Prosus CEO Bob van Dijk.

In particular, in the six months to September, the group’s online food delivery business grew revenue by 141%, double that of the equivalent period last year, etail grew by 70%, edtech grew by 54% and online payments – despite the bottom falling out of the airline and hotel sectors – grew by 29%.

In South Africa, where online sales accounts for just 3% of retail, online retailer Takealot grew revenue by 66% and Mr D Foods grew revenue by 100%, despite their respective lockdowns.

On the other hand, the global Classifieds business contracted by 3% as people stopped buying and selling second-hand cars and other goods.

Overall, the group’s e-commerce portfolio grew by 51% in the six months, its fastest rate.

“What happened this year was that the future came closer,” says CFO Basil Sgourdos. “People were forced online and we believe that now that they are online, they will stay online. The virus simply accelerated the rate of adoption.” 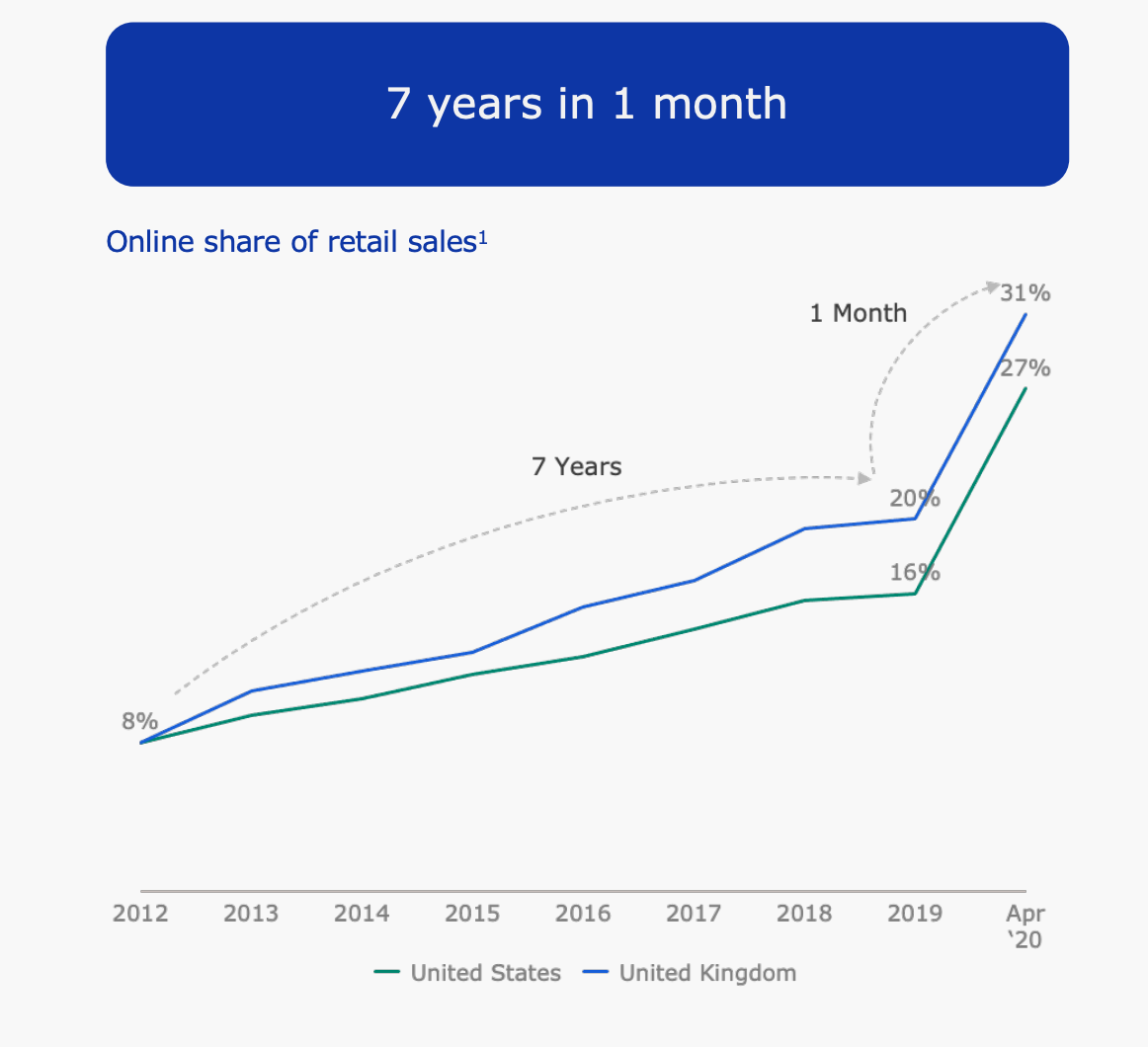 As a result, Prosus, 73% held by Naspers, grew revenue by 32% to $12.7-billion. Trading profit grew by 43% to $2.7-billion and core headline earnings increased 29% to $2.2-billion, driven by improved profitability from e-commerce units and the growing contribution from Tencent, which grew revenue by 28% and contributed 32% to trading profit.

Free cash flow jumped from $14-million to a healthy $370-million, driven by lower food losses, strong working capital management and an $81-million increase in the Tencent dividend – which grew 21% to $458-million.

“The acceleration in the revenue growth rate is a very positive development,” says Peter Takaendesa, head of equities at Mergence Investment Managers. “Of course, SA investors still want to see revenues translating into profit at the e-commerce level – but as long as revenue growth continues to be driven by strong user uptake, rather than price increases, I believe the trend is in the right direction.

“The e-commerce business reported a loss of $316-million, which is better than last year’s $415-million loss,” he adds.

Businesses that shot the lights out include iFood in Brazil, which grew revenue by 234% year on year and added 98,000 new restaurants to its platform, bringing its number of restaurant partners to 258,000 and processes 44 million orders per month.

PayU in India managed to grow revenue by 48%, despite a huge hit in quarter one as people stopped booking flights and travel online.

“We were able to overcome the losses by focusing on bringing more offline merchants online,” says Sgourdos.

The group remains as acquisitive as ever, and in the six-month period invested $600-million in online businesses, including its $400-million investment in Churchill II’s planned acquisition of Skillsoft and Global Knowledge. Subsequent to the half-year end, the group has invested a further $600-million in yet-to-be-announced acquisitions.

The constant stream of investments puts the brakes on e-commerce profitability in the short term, but it’s for the greater good, says Van Dijk.

“Our Brazilian food business was profitable two years ago, but the opportunity became so much bigger than we had anticipated, so we invested to capitalise on the growth, with the result that the business is running at a loss. But it’s the right thing to do.”

The balance sheet is strong with a net cash position of $4.3-billion, positioning the group well for whatever 2021 decides to throw at it.

“Like other big tech firms, Prosus prefers to maintain a net cash position – or as close to it as possible,” says Takaendesa. “It is a high-growth business, but it is also high risk, so gearing is deliberately kept low. The share buybacks may put the company in a small net debt position, but I expect this will be carefully managed.”

“The discount at the Naspers level is above 50% and we currently make up 29% of the Swix [shareholder weighted index], which is unprecedented,” says Van Dijk.

“We are committed to resolving this and are looking at many permutations and narrowing on a couple. But we recognise that this won’t change over the next six to 12 months.”

In the longer term it is growth in the e-commerce business that will narrow the discount, he says. “This business is generating a 20% return, and in time we think the market will come to appreciate this.”

It was with the discount in mind that the group announced a massive share buyback programme. Over the course of the next 12 months, Prosus will acquire up to $1.4-billion Prosus N ordinary shares and $3.6-billion Naspers N ordinary shares on the market. DM/BM