Zwelenkosi Ngidi, who was thrown from his wheelchair by metro cops, was ‘assaulted’ by police twice before 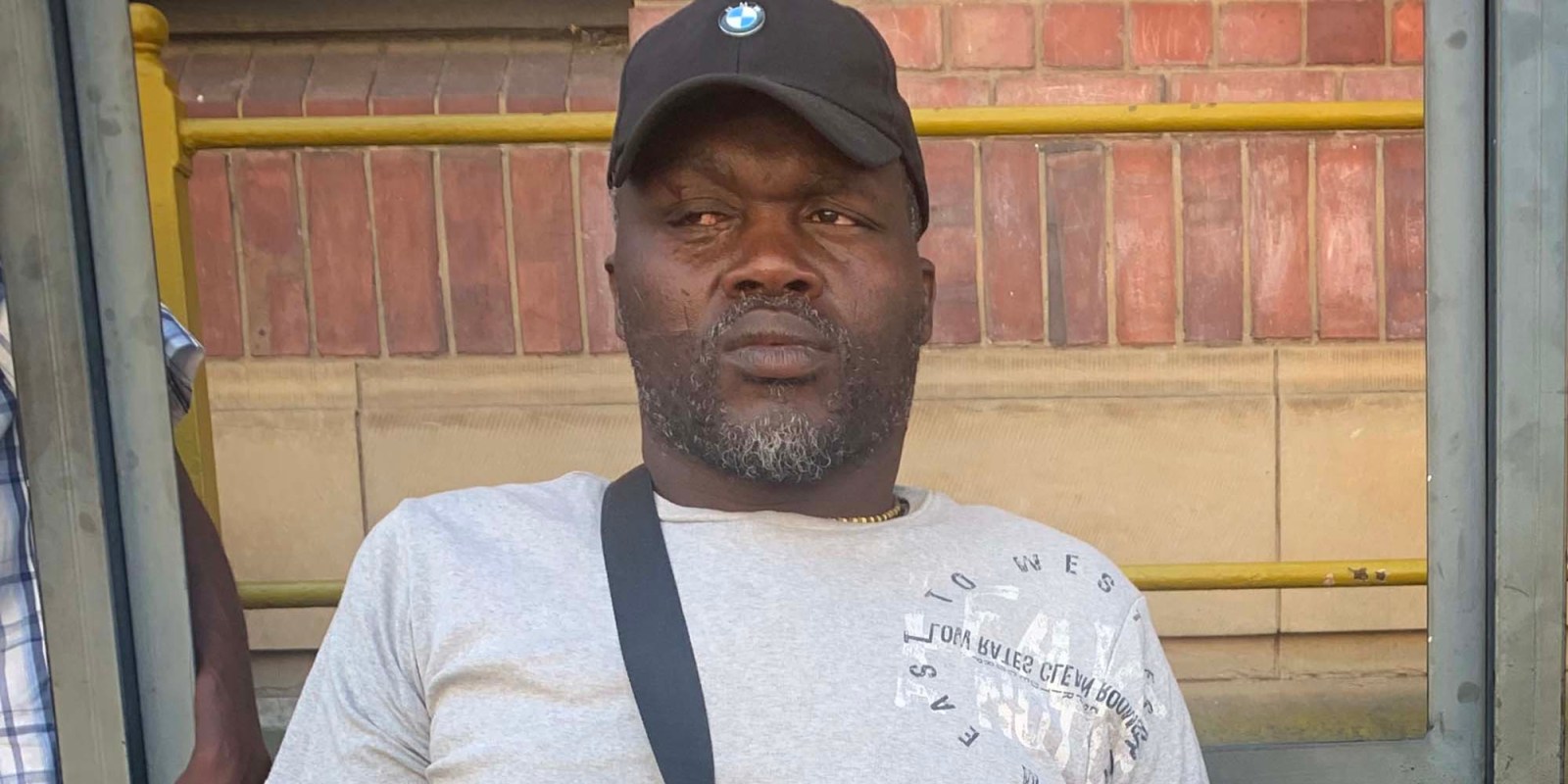 Zwelenkosi Ngidi is traumatised after being thrown from his wheelchair by a metro cop in Cape Town on Thursday. (Photo: Karabo Mafolo)

Two Cape Town metro police officers have been suspended after a video went viral of one of them tipping a community leader out of his wheelchair while the other looked on.

On Thursday November 19, community leader Zwelenkosi Ngidi was tipped out of his wheelchair by a metro police officer while another officer looked on. This was the third time he’d been physically assaulted by a police officer during a protest, but the first time it was caught on camera.

Ngidi, who has lived in Khayeloitsha’s eThembeni informal settlement for almost two years, had, on Thursday, joined about 80 people who have occupied land in Khayelitsha, demanding that the City of Cape Town provide them with basic services.

The Intlungu yaseMasetyotymbeni Movement, which represents land occupiers in Khayelitsha, said they had previously tried to engage with Cape Town Mayor Dan Plato, but without success.

The movement staged a protest on Thursday to demand water, proper toilets and sanitation, electricity and for the city to stop its applications for court interdicts against them.

About 30 people were arrested during the protest. Ngidi was not arrested, but as a community leader, he asked the officers why the arrests had been made. According to Mawande Jama, who spoke on Ngidi’s behalf, the officers were rude to Ngidi and threatened to arrest him.

In a video, which has since gone viral on social media, a metro police officer is seen tipping Ngidi out of his wheelchair after arguing with him.

This is unacceptable from the Metro Police. This is not the way to treat people 😡😡 pic.twitter.com/9XolQpAzyd

“This shows you how emboldened they are… that even in the presence of someone who’s clearly recording the interaction, they still do this. Clearly, there’s no commitment from law enforcement to uphold human rights,” said Ziyanda Stuurman, a researcher who’s writing a book on policing.

A day after the incident Ngidi was outside the Cape Town Central Police Station waiting for the community members who had been arrested to be released.

“I’m not really in a good place to speak about it. I’m still traumatised by what happened,” said Ngidi, who asked his friend Jama to speak on his behalf.

“He’s been humiliated and embarrassed in front of the whole world because the video has gone viral, but he’s still going strong even though he’s not feeling well emotionally,” said Jama.

“He was here as a leader of the people who stay in shacks, who don’t have houses and who’ve been struggling during lockdown. They believe that as human beings they have to have decent housing, but he was treated like rubbish,” said Jama.

“The incident is indicative of a pattern of violent behaviour from law enforcement, particularly in Cape Town. This is reminiscent of what happened to the man who was dragged out of his shack while he was naked,” said Stuurman.

Soon after the video went viral, Plato released a statement saying the two officers had been suspended with immediate effect pending the outcome of a full investigation.

Stuurman said that if the city was interested in restoring “some semblance of confidence in law enforcement, this matter should be dealt with quite quickly”.

Although Ngidi welcomed the suspension, he was disappointed that nobody from Plato’s office or from law enforcement had contacted him to apologise.

“Even when you’re suspended you can call and apologise. Clearly, for them, this is a norm and no one has the right to complain about staying in a shack,” Jama told Daily Maverick.

Jama said that later on the same day that Ngidi was tipped out of his wheelchair, he was bumped by a SAPS vehicle which damaged his wheelchair.

“If you look at his wheelchair, the right side of his footrest isn’t there any more.”

Jama said Ngidi had tried to open a case of assault against both the SAPS and metro police officers, but they refused to open a case for him until the station commander intervened. This was after four hours of waiting, said Jama.

“We are dealing with a police force that is ignorant of the constitutional rights of the people they are policing – it’s a police force that relishes the opportunity of belittling the poor and vulnerable,” said Nomathemba Masemula, the Social Justice Coalition’s communications officer.

The City’s Safety and Security committee said in a statement that the City doesn’t condone the officers behaviour hence the City “has taken the relevant disciplinary proceedings to remedy the situation.”

This wasn’t the first time Ngidi had been assaulted by law enforcement.

Three months ago, when a sewage pipe burst near eThembeni, residents staged a protest for it to be fixed.

“During that protest, a policeman deliberately bumped [Ngidi’s] wheelchair and he fell out, then [the officer] ran away. The second time [during another protest], he had an argument with a policeman; the officer was trying to wrestle him and he fell on the ground,” said Jama.

Ngidi reported the police officers to the Western Cape police ombudsman, but nothing had come of it yet, said Jama.

In the 2018/2019 Western  Cape police ombudsman annual report, there were 88 complaints of “unacceptable behaviour” from police officers. 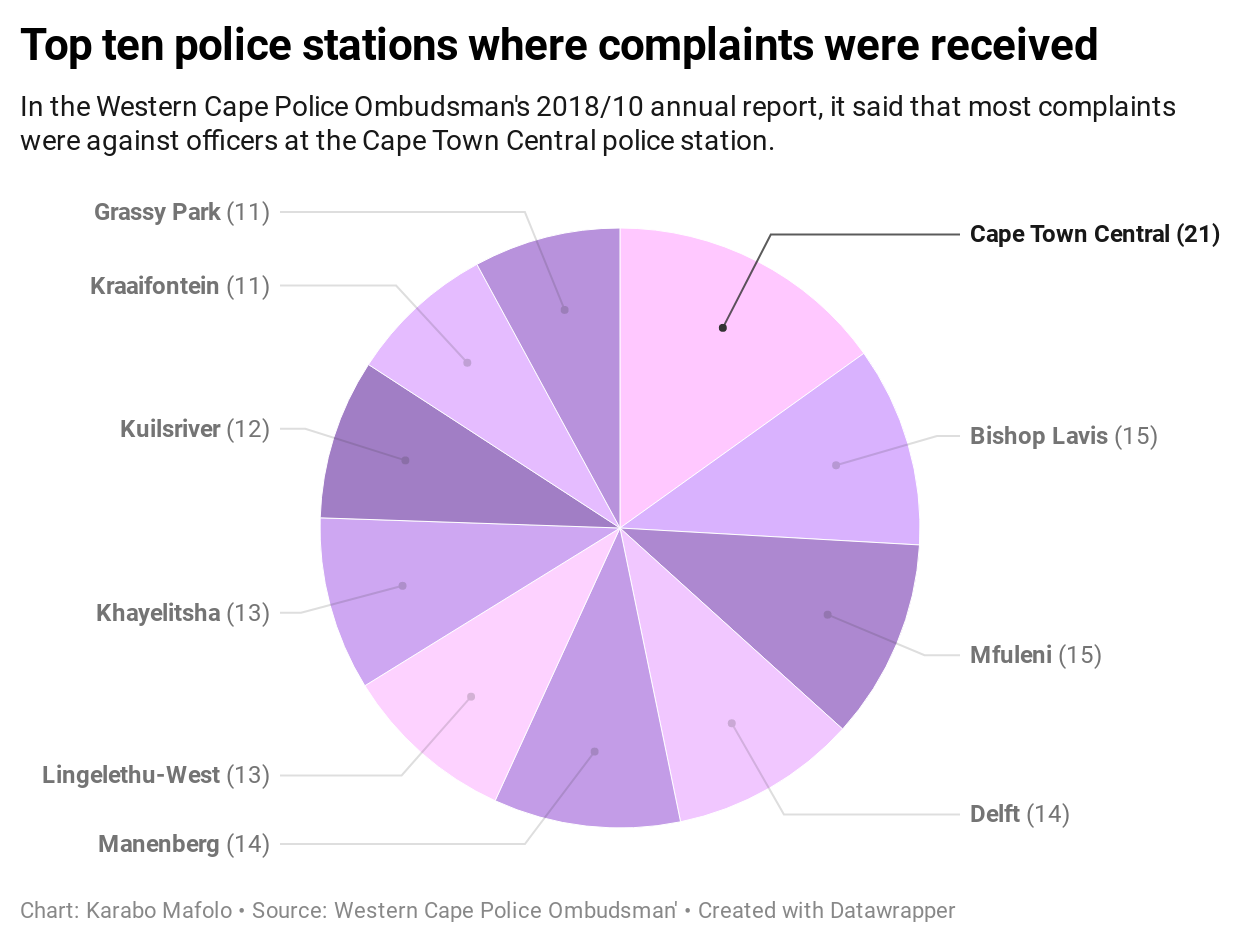 Most of the complaints – ranging from poor investigations, unacceptable behaviour and poor responses – were against officers at the Cape Town Central Police Station. DM