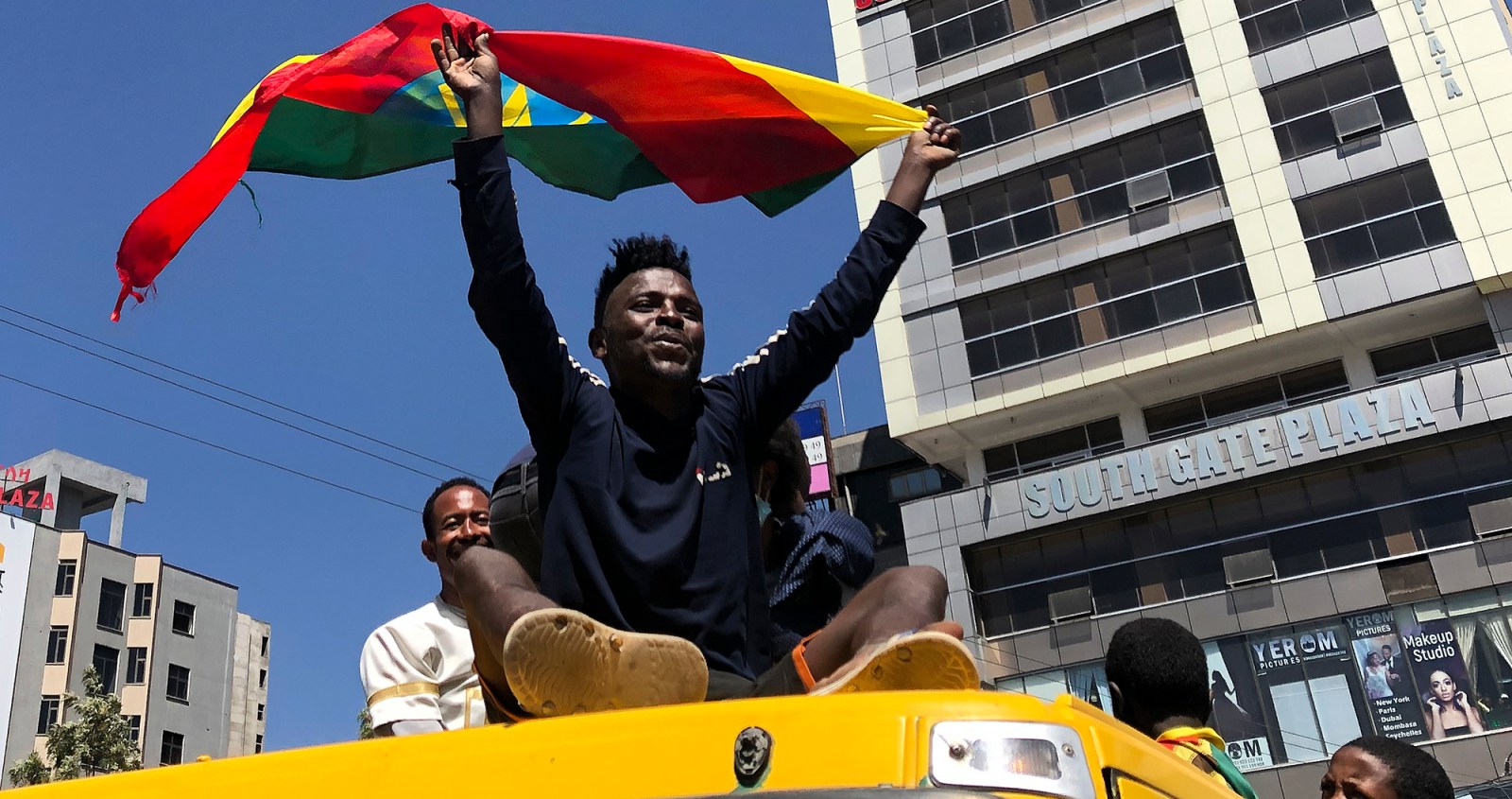 Ethiopians celebrate the military and carry Amhara flags and Ethiopian national flags in the streets after a national call to stand in honour of the Ethiopian National Defence Forces, Addis Ababa, Ethiopia, 17 November 2020.(Photo: EPA-EFE/STR)

The United States believes Tigrayan dissidents are waging civil war to depose Ethiopian Prime Minister Abiy Ahmed and to regain power in Ethiopia. Their aim is not for the Tigray region to secede from the Ethiopian federation.

US assistant secretary of state for Africa Tibor Nagy believes the leaders of the Tigrayan People’s Liberation Front (TPLF), who sparked the conflict by attacking central government military forces in Tigray on 4 November, are failing in their ambition to ignite similar rebellions in other cultural regions of Ethiopia.

“This was not to secede and create an independent state from Ethiopia, because the Ethiopian Constitution has a provision for the states to be able to secede peacefully,” Nagy said in a telephone media briefing from Washington on Thursday last week.

“It seems like they were doing this more to depose the prime minister from power and to reassert themselves into the prominent position that they had atop the Ethiopian political spectrum for the last 27 years.

“So, hopefully right now, I think that their tactic has had the opposite effect from what they were planning… it seems like this has brought the Ethiopian nation together, at least for the time being, in support of the prime minister, because this has really stoked Ethiopian nationalism.”

Ethnic Tigryans, though a small minority, once dominated the ruling Ethiopian People’s Revolutionary Democratic Front (EPRDF), an cultural-regional coalition which, under Meles Zenawi, forcibly ousted the Marxist dictator Hailemariam Mengistu in 1991, and then governed the country for nearly three decades.

However, when Ahmed, a cultural Oromo, became EPRDF leader and prime minister in 2018, he began to dismantle the cultural-regional arrangement in favour of a more centralised, less federal and non-cultural government, controlled by the Prosperity Party he founded last year.

Ahmed’s more liberal style of government and his move away from ethno-regionalism have liberated ethno-regional forces throughout the country, with the Tigrayans being most bitterly opposed to him, mainly because they believe he has deprived them of their dominant position in national government.

The current fighting seems to have been precipitated by a series of frictions, including the TPLF’s insistence on holding regional elections in September in defiance of the central government, which had postponed elections until next year because of the Covid-19 pandemic.

There is no equivalency here. This is not two sovereign states fighting against each other. This is a faction of the government running a region in Ethiopia that has decided to undertake hostilities against the central government, and it has not – in my view – had the effect that they thought that they were going to get.

Nagy, who was ambassador to Ethiopia during its very bloody war with neighbouring Eritrea from 1998 to 2000, said the current fighting was not about Tigray.

“There is no equivalency here. This is not two sovereign states fighting against each other. This is a faction of the government running a region in Ethiopia that has decided to undertake hostilities against the central government, and it has not – in my view – had the effect that they thought that they were going to get.”

US ambassador to Ethiopia Michael Raynor agreed, saying “the rest of the country actually remains quite calm at present; no indications of anyone taking up comparable actions elsewhere, and in fact the opposite”.

He added that it seemed other Ethiopian regional governments “and large swathes of the people” were galvanising around Ahmed’s government.

Africa Confidential has reported that TPLF leader and regional president Debretsion Gebremichael had called for outside mediation on 14 November, urging the UN and AU to engage. Daily Maverick has also heard that the TPLF is seeking African intervention.

But Raynor said he had spoken to both Ahmed and Debretsion this week, urging a ceasefire and exploring the possibility of mediation, dialogue or negotiations to that end.

“And I will tell you that at the time of my conversations, there was no receptivity to that approach. There was a strong commitment on both sides to see the military conflict through.

“And, in fact, neither side felt they could articulate a basis for a negotiated or a mediated solution at that time.”

Nagy said “a whole series of regional leaders, continental leaders, other international leaders have reached out with offers of mediation”.

If the warring parties showed any interest in mediation, “you can bet that the United States would be there in an instant”.

He said, in any case, the priority was a cessation of hostilities and then mediation could follow.

We urge independent investigations of all reports of atrocities and attacks against civilians. Those found responsible must be held accountable in accordance with the law.

“In Addis Ababa, Washington, across the region, and internationally, we are working with partners towards a quick end to the conflict,” Nagy said.

“We also urge both sides to maintain access for humanitarian organisations to provide essential assistance to vulnerable groups in the region.

“We have been unequivocal with the Ethiopian government and the TPLF that civilian lives must be protected and humanitarian access must be ensured.

“We remain deeply concerned over reports that civilians have been purposely targeted and attacked. We condemn the November 12 massacre in Mai-Kadra, apparently perpetrated by TPLF soldiers and militia as they retreated from the town.

“We urge independent investigations of all reports of atrocities and attacks against civilians. Those found responsible must be held accountable in accordance with the law.”

Raynor said the US, humanitarian governments and the UN had been pressing the combatants to establish humanitarian corridors to allow civilian access to fuel, gas and other essential supplies, and also to allow the monitoring of the safety of civilians.

The government in Addis Ababa “said they would look at that” but the TPLF “did not really engage on that possibility”. Nagy said the TPLF’s “hardcore” leadership was trying to internationalise the conflict by firing missiles at Eritrea, (including a missile attack on the airport of the capital Asmara on 14 November) so as to “really fan the flames of patriotism within the general population of Tigray”.

He said the US had told Eritrea it appreciated that it had not allowed itself to be provoked into retaliating to these attacks.

“Obviously, the Ethiopian government is also very keen to keep the situation from being internationalised because that would be destabilising to the entire region, which… historically has been one of the most unstable regions in Africa, if not the world.” DM