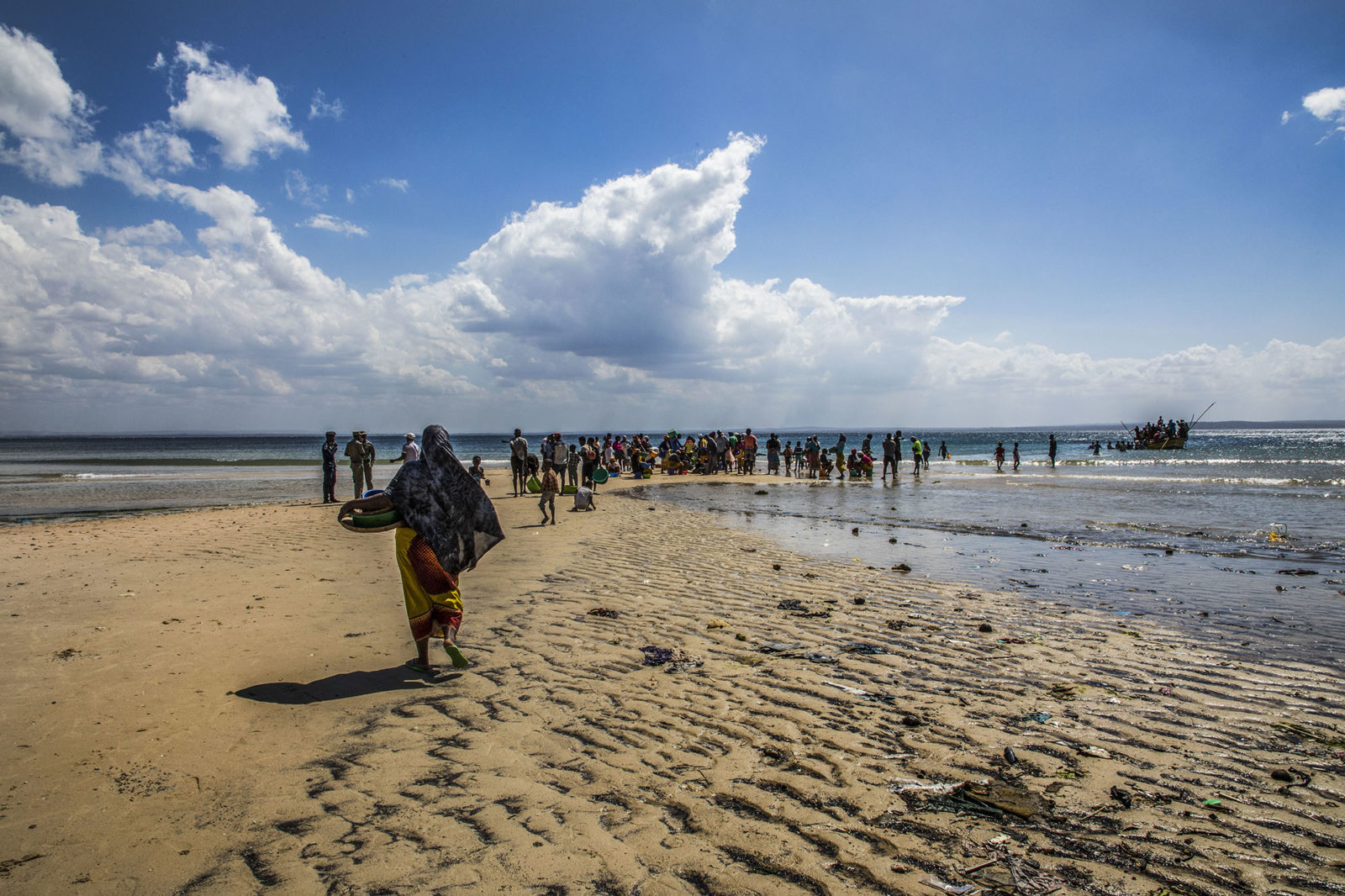 Passengers and cargo board a boat from a fishermen's beach that has become one of the main arrival points for displaced persons fleeing from armed violence raging in the province of Cabo Delgado, in the Paquitequete district of Pemba, northern Mozambique, 21 July 2020. (Photo: EPA-EFE/RICARDO FRANCO)

Isis has entrenched itself more deeply in Cabo Delgado and has a third district capital in its crosshairs.

The Islamic State insurgency is becoming ever more deeply and irremovably entrenched in northern Mozambique’s Cabo Delgado province, expanding its territory and its influence through increasingly brutal terror.

Mass beheadings reported in Muidumbe district early this month have panicked local people into fleeing further to the south and west, many to Mueda, the heavily protected capital of the neighbouring district.

But this week the insurgents – now flying the banner of the Islamic State Central Africa Province (ISCAP) – warned Mueda residents to evacuate by Friday in advance of an attack on the town.

The insurgency has occupied the coastal town and district capital of Mocimboa da Praia for more than three months and is using it as a base for launching ever larger and bloodier attacks further afield. ISCAP insurgents are also still holding their second district capital, Muidumbe, which they captured on 31 October.

Mueda is protected by a large government military base. But the newsletter Cabo Ligado quoted a source as saying ISCAP reinforcements moved from Chitunda to Nchinga in the Muidumbe district on 15 November in anticipation of a push toward Mueda. And its inhabitants are taking seriously a message from ISCAP warning of an impending attack.

Showing scant faith in the ability of the army to protect them, many residents have started fleeing further afield. Three commercial banks, BCI, Millennium-BIM and Absa, closed their branches in Mueda this week, according to security sources. Shops closed and bus companies also suspended their services to the town.

“Then, the liberation hero and former general, prominent Makonde leader General Alberto Chipande, evacuated all his family from the town which added to the general panic,” the source said.

“The ability of the insurgency to create fear and force people to flee without firing a bullet, just by sending a message, is cause for concern in itself,” said Jasmine Opperman, researcher on insurgencies at the Armed Conflict Location & Event Data Project this week. But if ISCAP did attack Mueda, “it’s going to be a helluva fight and a lot of bloodshed,” she added.

Other security sources said there was some hope that the new military equipment recently provided to the Mozambique military by the South African arms company Paramount could help the government troops hold Mueda.

“Should they succeed in capturing Mueda, it would be a massive victory, apart from the strategic value of the town, but also psychological,” the source said.

“The biggest mistake the government has made is to allow such a sustained occupation of Mocimboa da Praia,” said Opperman.

In the past, the insurgents have taken the town several times but have always retreated after a few days – as they have from several other towns. But this time, they captured the town on 9 August and have held it ever since. “And there’s no sense of a government on the verge of taking it back,” Opperman said.

Another security analyst agreed the government’s military situation was deteriorating. He said the military had launched a large area offensive against insurgent positions about three weeks ago, aiming eventually to recapture Mocimboa da Praia.

“It seemed, for the first time, that they were slowly taking charge of the narrative and gaining the initiative. This was, however, short-lived. The insurgents came back with a vengeance. They concentrated their  attacks on the Palma and Nangade districts while redeploying forces in the Muidumbe and Mueda districts.”

This counteroffensive culminated in the capture of Muidumbe on 31 October, and then a series of attacks on surrounding villages, including Muatide.

The private military company Dyck Advisory Group, which has been providing air support to the Mozambique army for about six months, is proving inadequate to turn the tide, sources said. This is mainly because of the weakness of Mozambican ground forces, but there are also reports now emerging of leadership divisions within the group.

Local media reports of insurgents beheading about 50 locals on a soccer field in Muatide on 1 November brought global attention to the insurgency, including condemnations from UN Secretary General Antonio Guterres and French President Emmanuel Macron, as well as calls for regional and international military intervention.

Opperman says she does not believe that 50 people were beheaded on a soccer field in Muatide in one incident, though many beheadings had likely occurred at about that time in the district. The governor of Cabo Delgado has denied the beheadings.

However, Cabo Ligado credits a Voice of America report that quoted survivors as saying that collectively more than 50 people had been kidnapped from surrounding villages, brought to Muatide, and beheaded on the village soccer pitch over several days.

“Some of those beheaded were teachers and other government workers who had returned to the district to comply with the district administrator’s order that government services would resume by early December.”

It speculated that the insurgents were treating Muidumbe civilians more harshly than civilians further east in Cabo Delgado because of ethnicity, religion and politics.

“The population of Muidumbe is both more Makonde [the dominant ethnic group in the province] and more Christian than other conflict-affected districts, and the Muatide massacre explicitly targeted young men involved in initiation rites as well as government workers.” It added that Muidumbe residents were also more supportive of the government than other areas and so had more pro-government militias than most.

As ISCAP roots itself ever more deeply and widely in Cabo Delgado, there is growing speculation that it is steadily becoming a de facto caliphate – an Islamic state like the one its mother body established in Iraq and Syria in 2014.

Opperman does not think that is imminent, though she does note that Mocimboa da Praia is serving ISCAP “as a type of capital, from where they operate and plan, where training takes place … and where people who want to support the insurgency can go”.

The attacks planned and launched from Mocimboa da Praia had extended not only into several other districts of Cabo Delgado but even across the border into Tanzania, she said.

But it was still too early to characterise Mocimboa da Praia as the capital of a caliphate as there were no signs yet that ISCAP had established an alternative government in the town. And the insurgents themselves had not declared a caliphate.

“What we are seeing is classic expansion tactics of IS where they are hijacking a local insurgency and then entrenching their own extremist ideology to their own benefit. This is an evolutionary process taking place. And I’m afraid we have broken the three-year barrier with this insurgency.

“If you look at studies, once insurgents survive the first three years, one sits with a medium- to long-term problem. And, for now, there is simply no U-turn on the table. There is simply no indication that government has improved its capacity and capability to counter the insurgents effectively,” Opperman said. “It is high time that SADC [the Southern African Development Community] impresses upon Maputo that the insurgency has regional implications and that its strategy needs to change because it is failing dismally.” DM168