A life in rugby, against all odds 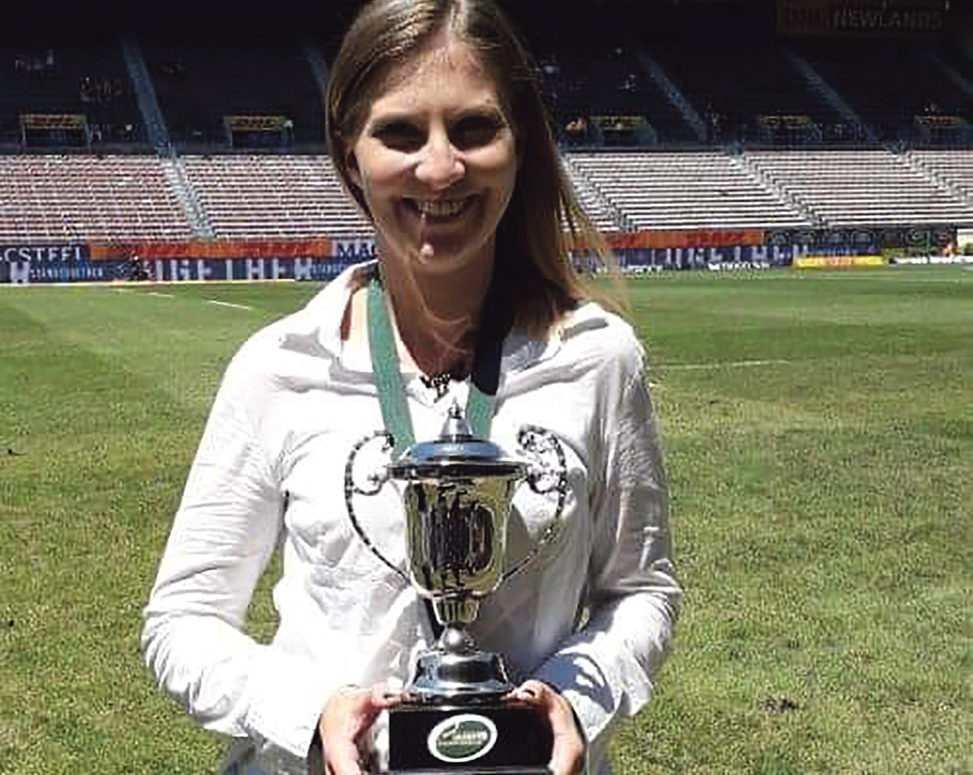 Being a female in a male dominated sport can be a lonely place, but for rugby analyst Karen Vermeulen, she lets the stats do the talking.

Karen Vermeulen was just two days old when rugby elbowed its way to front and centre of her life.

Born on 4 October 1990, Vermeulen spent her third day on the planet sitting on her father Patrick’s lap, watching a game between two teams that would become a significant part of her life.

Said match was the iconic Currie Cup final that formed the building blocks for the Sharks’ current reputation as a massive rugby brand, thanks to their seismic upset of Northern Transvaal as Natal to win their first domestic title.

For reasons as geographic as they were of the heart, those two teams have come to mean an awful lot to Vermeulen, who has exchanged watching rugby on her old man’s lap for becoming the game’s first female analyst in the country.

Having moved from Kimberley to Pretoria as a four-month-old because her father got a job as the estate manager overseeing the upkeep of the grounds at Pretoria Boys High, Vermeulen – the Sharks’ junior teams’ analyst – grew up in the shadow of Loftus Versfeld while schooling at Pretoria Girls High.

“Growing up there and going to watch Boys High play every Saturday and then going to Loftus… my life was just dominated by rugby,” remembers Vermeulen, who couldn’t avoid a love for sport because she was inseparable from her father.

“I turned out to be more of a tomboy than my sister (Elise) because I’d spend my school holidays working with my dad when she would be with my mum (Lynette). As a result, I know how to curate a cricket pitch and all that stuff that groundsmen do.

“On my typical weekend I’d wake up and watch K-TV and, as soon as my dad woke up, we’d watch either cricket, rugby, tennis or Formula One. Between that and the rugby at Pretoria Boys and Loftus, that’s all we did all weekend.”

For someone with such an eclectic taste in sport, not to mention a borderline obsessive interest, Vermeulen wasn’t particularly keen on getting her own hands dirty: “I actually didn’t play any sport. I did like social tennis and stuff, but I wasn’t really interested in playing sport.”

Despite an upbringing saturated in rugby, a profession within the game wasn’t the first thing she thought of. Due to her ability to sing – she’s into musicals, rock and punk rock – Vermeulen thought she might try her hand at singing.

But her own cousin, and possibly the fact that she’s not exactly the first to grab the microphone on karaoke night, intervened. “My cousin wouldn’t give me a contract, which I’m now kind of grateful for. She was in the music industry and she just felt she couldn’t put me through what music artists go through.

“I have to say, after watching a few documentaries on Lady Gaga and Katy Perry I completely understand why she wouldn’t let me do that because it is emotionally draining on a person.”

Understandably, it took her father, who asked her “what do you want to do when you leave school?” when she was in Grade 11, to get a straight answer out of her. “I told him I wanted to be an analyst for the Sharks and help them win a Super Rugby title.”

The specificity of that answer came from the fact that the Sharks had just memorably lost the first Super Rugby final contested by two South African teams to the Bulls, and Vermeulen, who’d ironically supported the Pretoria side for that game, changed her allegiances.

“My sister’s theory is that I had a crush on Francois Steyn and that it wasn’t really about the Sharks,” explains Vermeulen. “But I’d started watching Sharkbite TV and saw what the guys were doing off the field and it was inspiring for me that they weren’t just rugby players, they were also helping the community out.”

Fittingly, Vermeulen got her first opportunity at her chosen profession a decade ago at Pretoria Boys High as the rugby, hockey and water polo analyst. But when the school dithered about giving her a contract in 2011, she sent out her CV to schools around the country and Hilton College answered.

At the time, Hilton’s rugby programme was run by former Sharks loose-forward Brad McLeod-Henderson, whom she told her goal at the time was to work for the Durban franchise by the time she turned 30.

That stated ambition came in handy when Hilton was “dragging their heels” about extending her contract in 2013, and McLeod-Henderson – who had become part of the Sharks’ coaching team – asked her if she wanted to join him.

“I said: ‘Why are you even asking?’ The catch was I had to go to Cape Town and do a four-month course on software they used for analysis in 16 days, which I managed to do. And on the sixth of January 2014 I started at the Sharks.”

No rest during rugby season

Vermeulen’s typical working week is a bit like the cramming she had to do just to get up to speed for the Sharks job, especially in season.

While the rest of us take in the game at leisure with a beer in hand, Vermeulen films it with the two head analysts (from ProZone) for what she calls “live coding” so that can be handed over to the coaches almost immediately after the game.

“I then go back to the office and do more in-depth coding like looking at the different zones on the field, our breakdowns, gain line percentages… all that stuff I do after the game and by Sunday midday I have to hand it over to the coaches.

“Then we start with opposition analysis, where we look at the last four games because from that you can see a trend. It takes about a day and a half and I give it to them by Monday afternoon or, at the latest, Tuesday morning.

“There’s no rest for the wicked in this industry, you only get a day off when the rugby season is over…”

Like most women who can’t name-drop their school for rugby credibility in a pub debate, Vermeulen says she has often been asked “what do you know, you’re just a girl?” when questioning the veracity of some of the outrageous statements made there.

“I usually rattle off some stuff to them and they look at me with a blank expression. I’ve had those instances when people find out I’m a female working in a male dominated environment. The first reaction is shock and then it’s ‘wow, that’s impressive’.

“But I don’t want to be the only female working in this industry, I want other women to be able to do it and to know that they can do it.”

While she has “butted heads” with the odd coach or “had to put players in their place”, Vermeulen says her colleagues have been nothing but respectful of her as they all have a common goal. Unlike some analysts, she has no ambition of becoming a coach.

“I don’t think the players would like me,” she declares. “I’m very old school when it comes to coaching, I’m more Kitch Christie when it comes to my thoughts on coaching where I believe we might not be the most talented but we’ll definitely be the fittest.

“My dream, though, is to work with the Springboks one day or the Irish national team because I have Irish ancestry.” DM168

What’s cooking today: Preserving and bottling your own olives