Let the Children Play – The start of reclaiming a Hillbrow park 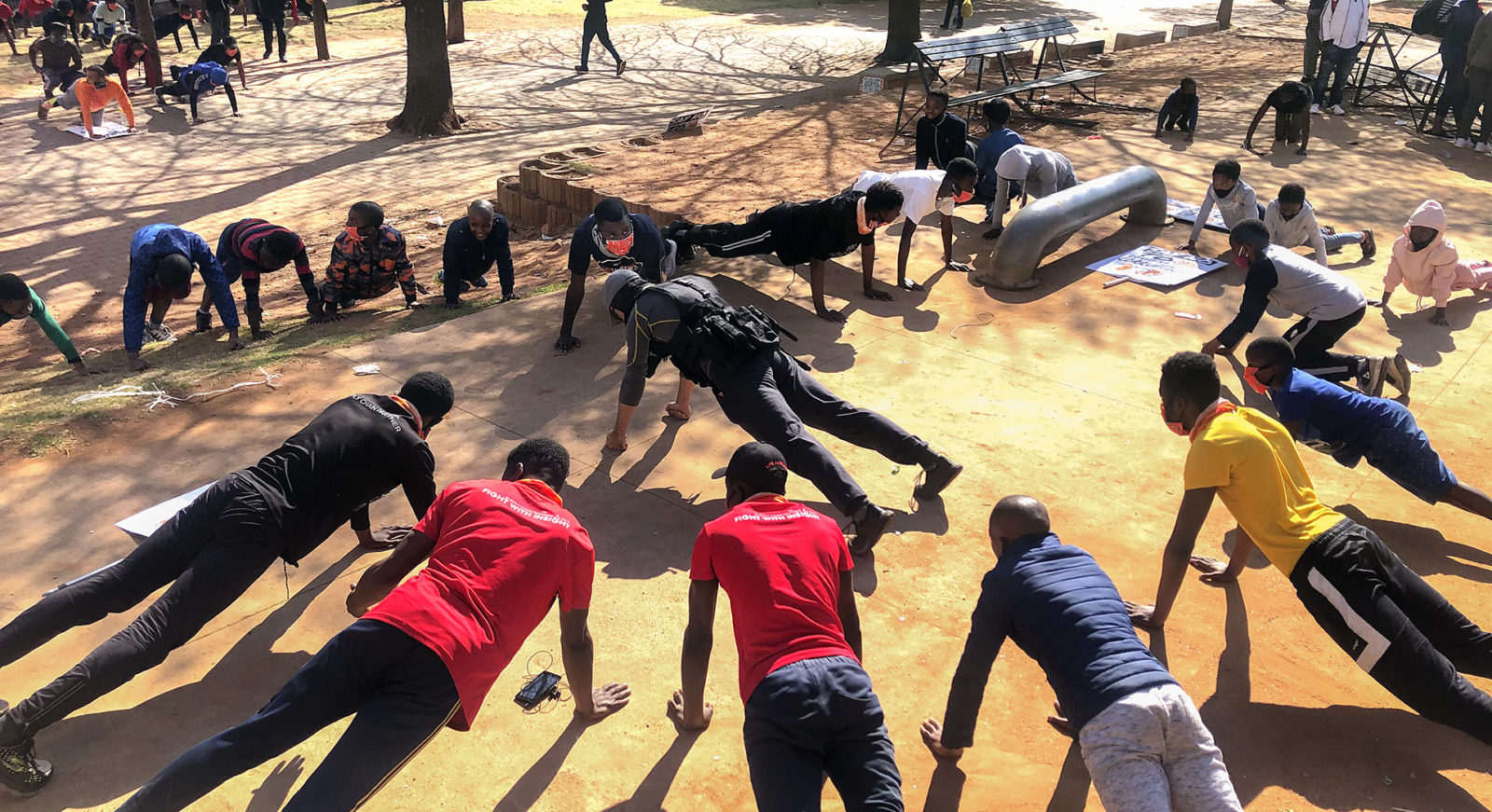 Fight With Insight reclaiming the streets and parks of Hillbrow for sports and fun. (Photo: Mark Heywood)

Today is world children’s day. Tomorrow, to give it practical meaning, a group of activists and organisations are starting a journey to reclaim Pieter Roos Park, near Hillbrow, and make it a safe place for children to play in.

Pieter Roos Park, established way back in 1912, is one of the oldest parks in Johannesburg. Once upon a time it was a peaceful oasis, today it is a place where most local residents fear to venture. Yet it remains full of possibility – its old trees are interspersed with public art, there’s an outdoor gym put there by Radio 702 a decade ago and other brik-a-brak deposited by history and time.

The tortured Braamfontein Spruit runs through it, on its way to join the Jukskei River and later the great Limpopo river.

According to Luke Lamprecht, child development specialist, but also a lay historian of the inner city, the park rests “at the apex of all the different Joburgs”; it is sandwiched between Hillbrow and old Houghton, Braamfontein and Constitution Hill.

In recent years Pieter Roos Park has fallen prey to drugs and crime; it is a spillover area from the overcrowded homeless shelters in Hillbrow, what Lamprecht calls the ‘hub of homelesness’. It’s flora is interspersed with drug and sex paraphenalia; polluted by human waste.

Yet its location and beauty make it a vital public space.

On Saturday, to mark World Children’s day, a group of organisations including Fight With Insight, Clean City South Africa and Lefika La Phodiso Art Counselling & Training Centre are organising a community clean-up and morning of sports activities in the Park.

Fight with Insight, a free gym, is a home from home for hundreds of young men and women from Hillbrow who learn boxing, train physically on the streets of Joburg but also learn and practice shared values of citizenship and social solidarity.

Dalu Cele, the founder and CEO of Clean City SA, told Maverick Citizen “We are delighted to work with Fight with Insight to launch a third location of the Adopt A Street programme, this time in Parktown.

The other two locations are Pullinger Kop (where you will find a plaque commemorating the revolutionary writer and thinker Olive Schreiner) and Pretorius street, both in Hillbrow.

“This is where volunteers will clean up their adopted streets and the park every Saturday morning from 8am.

“What is of significance to CleanCitySA this time, is that young people are getting involved in keeping our streets and open spaces such as parks, free of litter.”

The aim is to ‘reclaim the space’, particularly for local children, but, says Lamprecht, “to do so not by driving people out but by drawing people in.” For this reason efforts have been made to involve all the communities who have a stake in the park including, for example, waste pickers who live there. Lamprecht is at pains to stress that the aim is not to “Nimby-fy” the Park, but to revive and restore it as a shared space, where its diverse stakeholders all cooperate to ensure its safety and serenity, particularly for children.

He hopes that one day after Covid-19 a local ParkRun could be established in the park (take note Bruce Fordyce), another way of reoccupying it, as happens in Bezuidenhout Park, another Johannesburg inner city park that is in the process of restoration as a public space.

Fight With Insight’s overarching motive is to help create spaces where children and young people can play safely again. Having fun in safe spaces is one of the pillars Lamprecht identifies as being needed to help children through and beyond the trauma that they have experienced as a result of the Covid-19 pandemic. He links it too to the promise of the Sustainable Development Goals, signed by every government in the world, to work to ensure ‘good health and wellbeing’ (SDG 3) and ‘sustainable cities and communities’ (SDG11).

Lamprecht is hopeful. He talks about how during level 5 of the Covid-19 lock down, after people were permitted out of doors to exercise between 6 and 9am every day, the Park became vibrant and was once again full of people seeking fresh air and outdoors;  “we had a critical mass under Covid … then the police chased us out.”

Reclaiming parks has been done before. A nearby park, The Wilds, has been painstakingly restored by James Delaney and volunteers. It is now once more a place of peace, where nature can outshine the shadow of the city. It’s a park as beautiful as any in the world.

It can be done again. But it depends on civic will. World Children’s day is a good day to ignite it. DM/MC

Those interested to join and support: Meet at 8am on Saturday 21 November, the Children’s Memorial Institute, cnr Hillside and Empire roads, Parktown.