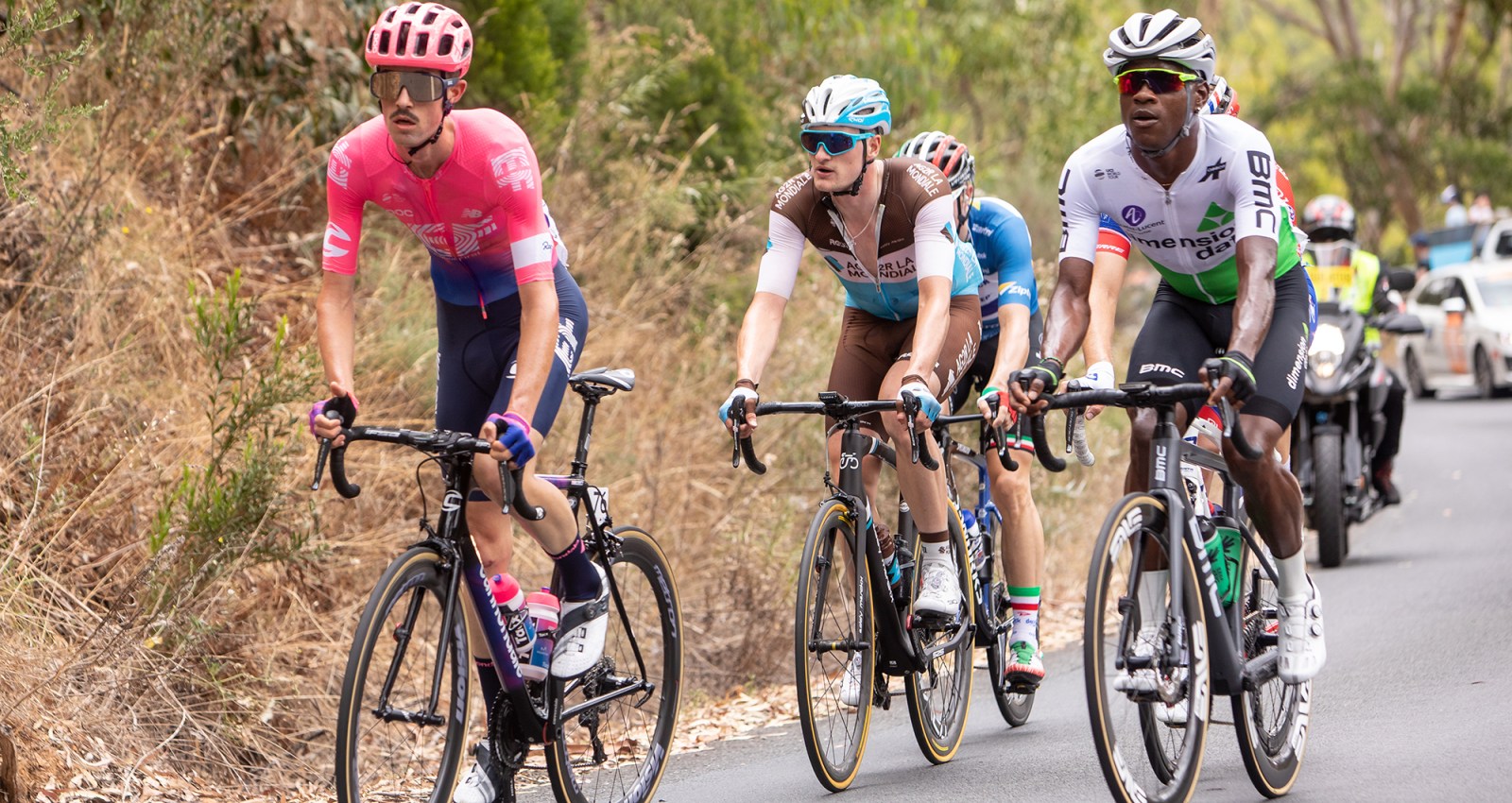 James Whelan of Australia and EF Education First Pro Cycling, Nic Dlamini of South Africa and Team Dimension Data for Qhubeka, Nico Denz of France and AG2R La Mondiale, Leo Vincent of France and Groupama-FDJ and Elia Viviani of Italy and Deceuninck - Quickstep on the King of the Mountain climb at Fo Creek during Stage 3 from Lobethal to Uraidla of the Santos Tour Down Under on January 17, 2019 in Uraidla, Australia. (Photo: Peter Mundy/Getty Images)

In late September, Japanese telecommunications giant NTT announced that it would exit its relationship with Ryder’s team, NTT ProCycling, which had gone through several previous incarnations. The effects of the Coronavirus pandemic squeezed businesses globally.

Since founding the team, Ryder’s ultimate dream had been to use the profile and success the team developed on cycling’s global stage to promote its purpose: changing lives through bicycles together with the Qhubeka Charity. To that end the team raised funds for more than 30 000 bicycles for distribution to Qhubeka programmes in South Africa.

But the charity component can only survive if the professional team remains competitive on the World Tour, winning races and stages at events such as the Tour de France.

NTT acquired South African company Dimension Data for R24.2-billion in 2010, but it was only in 2019 the head office in Japan decided to drop the Dimension Data brand. NTT effectively took over the sponsorship of Africa’s only professional World Tour cycling team. But it was always a relationship forced on NTT as part of Dimension Data’s portfolio and they have wasted little time in unloading it with their four-year deal coming to an end.

Ryder was always aware that NTT’s partnership was likely to end but he hoped to do enough to convince them to stay on. But when the pandemic struck, it was the final act in the union.

In between trying to manage a team through back-t0-back-to-back Grand Tours – the Tour de France, Giro d’ Italia and Vuelta Espana, Ryder had to get on his metaphorical bicycle and race around trying to find a headline sponsor. Cycling at World Tour level is not a cheap sport and Ryder required a partner that could pick up a large chunk of the R400-million annual budget needed just to keep the team competitive.

While it’s a massive amount of money, it pales next to the giants of the sport such as Team Ineos Grenadiers and Jumbo Visma, which run on budgets at least twice that scale.

But on Friday, a relieved Ryder was able to announce Swiss company ASSOS, a leader in cycling apparel as a headline sponsor for 2021. There is no indication of the amount and the deal is only for 2021 at this stage.

“We love the mission, the people and the challenge that comes with it,” said Roche Maier, ASSOS Board Member and Chief ASSOS Creative design Centre. “We are made in cycling and contributing to support and further develop the pinnacle of high-performance cycling is just the proper thing to do, especially in these uncertain times.

“Team Qhubeka ASSOS is not a traditional sponsorship but will be operated as the lighthouse of the ASSOS Worksteam. Our team will be used and abused to push boundaries of product development and stress tests to yet another level.”

The new deal has been enough to buy Ryder, who is the registered owner of the World Tour licence, some more time to shop around for a long-term partner or expand the ASSOS partnership.

“I am really happy to have gained the support of some incredible people and partners including ASSOS of Switzerland who have stepped in to be a headline sponsor,” Ryder said in a statement.

“To be able to recreate the team as Team Qhubeka ASSOS talks to exactly what we continue to strive for, and that is to be a purpose-led, high-performance racing team. The last few weeks have been incredible seeing all the comments from fans in terms of how this team has connected with them in different ways. I am so happy we can continue to create hope and opportunity through our team and with the Qhubeka Charity.

“I look forward to welcoming new partners to Team Qhubeka ASSOS as we plan and prepare for a new season in 2021 in a world that has been so heavily impacted by the pandemic. The bicycle continues to be a tool to change the lives of so many people for commuting, for sport, for health, for freedom and access. Our team has always been about much more than victories, but we do love to win.

“I also want to pay a special tribute to our staff. Those in the sport know just how difficult it is, so to see the diligence, care and professionalism they’ve shown throughout gives me inspiration, every day. We truly are a family.”

Ryder is the heart and soul of the team

Ryder had been in talks with Danish investors Lars Seier Christensen and Jan Bech Andersen to buy a portion of his stake in the team. Their influence played a role in bringing former Tour de France winner Bjarne Riis on as team manager in 2020, but the relationship is also over.

Riis left the team by mutual consent earlier this month and Ryder has since suspended talks with Christensen and Andersen as he looks to the future and saving the team he built from nothing.

Ryder was realistic when the pandemic struck and in an interview with Daily Maverick earlier this year, hinted that hard times lay ahead.

“At this point NTT in particular, but Alcatel-Lucent, BMC and others are sticking with us,” Ryder said in April. “They have been understanding, but some of our sponsors are in retail and others are in business-to-business sectors and they are also under pressure because of the pandemic.

“They have to make sure that they sustain their businesses and staff. That’s where we are as a team as well and fortunately there is a mutual understanding with our sponsors that we are all trying to do the right thing by saving jobs.”

Thanks to the support of ASSOS, Africa’s team will survive and fight another day in the cutthroat world of professional cycling. DM