A Mediterranean odyssey in Johannesburg

A Mediterranean odyssey in Johannesburg 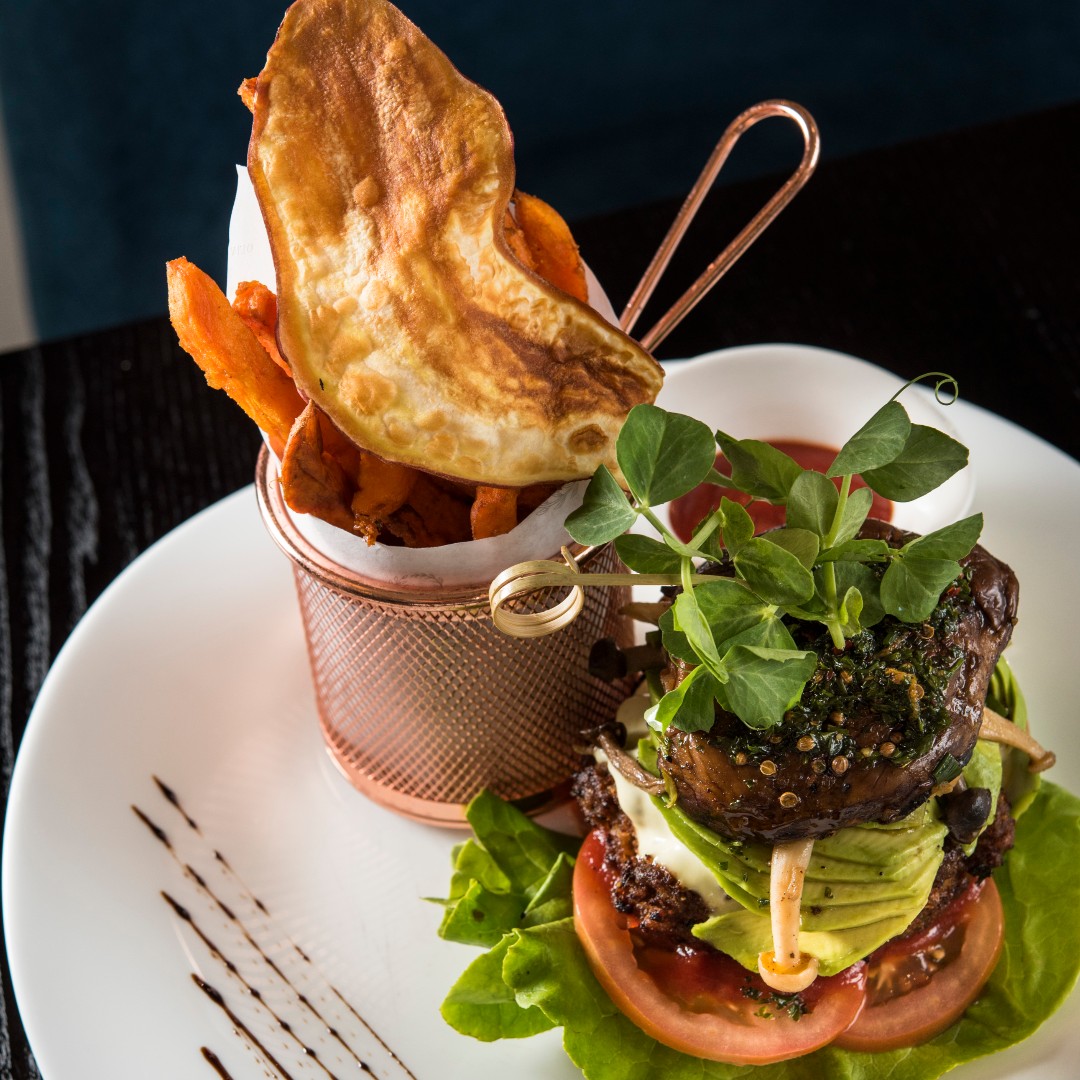 Keeping up with food trends with a carb-free Portobello mushroom and avocado beef burger. (Photo: Supplied)

In a year dulled by Covid-19, Olives & Plates restaurants offer a riot of colour and exquisite cuisine.

It is serendipitous that Olives & Plates first planted roots 10 years ago off Johannesburg’s Empire Road on the Wits University Campus, and that another branch is in Empire Place in Sandhurst, for a business empire is indeed what this Mediterranean-styled restaurant and catering company has become.

“We have been in partnership for 30 years, it just works. We all have our own areas – the men look after HR and the financial aspects, I am the foodie while Litza handles the canteens and external catering,” says Neophytou, when I meet her at the Cape Dutch-style restaurant at Wits Club.

The menu has been standardised across all restaurant branches – Wits, 140 West Street in Sandton, The Embassy in Sandown and at Hyde Park Shopping Centre – and is punctuated with Neophytou’s heritage without being overwhelming. “The Nonna’s meatballs are actually my mother’s keftedes; we use the Italian word for grandmother as this is more recognisable than saying yiayia.”

Crammed with herbs and fresh vegetables, it is Neophytou’s creative plating that first alerts you to the fact that your approaching meal isn’t just another ordinary business lunch or date night dinner. Besides artful smears of purée, one of the wow factors is a crisp bread halo which is balanced over certain dishes, often taking the place of a crouton in a salad. Her function menus are tailored to request and budget, often including lavish buffet spreads.

For a business that began as a canteen dishing up lunches to Wits staff, students and visitors, the pandemic cemented the idiom of not keeping all of your eggs in one basket.

The catalyst for expansion came in 2015, when the #FeesMustFall student protest shut the Olives & Plates restaurant and canteen at Wits down for two months. Within six months, they were approached with opportunities to run a restaurant at 140 West Street in Sandton and at Embassy Towers.

“Imagine if we only had the canteens when Covid-19 hit? Expanding turned out to be a good business decision, even if opening two new restaurants six months apart gave us sleepless nights.”

Today, Embassy Towers is popular for events such as bridal and baby showers as well as guests.

The Hyde Park restaurant opened in July 2019, in the space that was originally EB Social Kitchen. Neophytou describes the store as “floating” over Sandhurst. In November, with Jacaranda trees in full bloom, the experience is uniquely Johannesburg yet, as its creator says, you feel as though you’re in Manhattan.

You don’t leave Olives & Plates hungry – meals are substantial but also well priced (unless you allow yourself to get carried away at Hyde Park’s harvest table, a smorgasbord of ever-changing best sellers). Neophytou is proud of the fact that no plates are returned to the kitchens.

“I listen to my customers. They need to leave feeling satisfied with the entire experience. We get a lot of vegan requests. The harvest table has something for everyone to eat, with plenty of vegetarian dishes too.”

On arrival at any Olives & Plates, your eyes will be drawn to a glass-dome covered display of cakes, aka “the table of temptation”. A tradition first started at Wits on a circular table underneath a magnificent chandelier, passionate baker Neophytou has taught her kitchen staff to bake, and today each store bakes their own cakes, from salted caramel to honey cake, cheesecake and a flourless lemon poppy seed.

“When we opened the Hyde Park store I thought these women, clad in their gym kit, would not eat cake, and that I should come up with sugarless, flourless creations. Was I so wrong! I had to increase the variety very quickly.”

The towering layered creations, topped with meringues or fruit, are impressive, although the staff is devoid of pastry chefs.

“Each restaurant has an executive chef who has brought their experience and also been trained by me. I have had better results by building my staff up.”

When food deliveries were allowed during lockdown, the Olives & Plates team created meal hampers of fresh bread, soup, hearty chicken pie, with tiramisu for dessert. I was fortunate to be gifted one of these, beautifully presented, from clients after a family bereavement in August. “I opened the kitchen at 140 West Street for Mother’s Day and the staff were so enthusiastic about coming to work.” Uber Eats and Mr D were added and the harvest table at Hyde Park was expanded for customers to pick up ’n go, and Olives & Plates ticked over until they were allowed to reopen.

They didn’t always have bums on seats. Their first restaurant, a Dulce Café in Cresta in the 1990s, opened with a loan from the family’s bond, was empty for the first month. “We did the Greek thing, told our families to come, positioned them at tables near the passing shoppers with plates of food. Within a year we had the most successful turnover in the centre.”

While enjoying a salad with a creamy herb dressing at Embassy Towers recently, before knowing about the Dulce Café history, my taste buds transported me back to my childhood in Port Elizabeth, where the dressing was a staple at the chain that originated in the city.

Getting the recipe for Olives & Plates right took much hard work. “Our experience running canteens was priceless. You’re constantly changing up the menu to avoid food fatigue, and I think we changed the way students eat – no more creamy stews, rather we focused on producing healthy, sustainable and freshly prepared meals and salads.”

Neophytou admits she was spoilt with regard to working hours in the first five years. “No weekends, no night times, just the occasional wedding and after-hours function.” This suited her with two boys still in school. Today, you will find the foursome working their restaurants up to seven days of the week, chatting in Greek if they happen to cross paths.

“One of us is usually at a store. Your staff have to be supported, they are working long hours under pressurised conditions. Food has to come out quickly, and in the best possible way it can be made.” Staff call her “Mamma”, revealing their fondness for their leader.

Every 15 minutes a bell rings in the kitchen reminding staff to sanitise their hands. “I can say with confidence we never have cases of food poisoning. We keep samples of each food item in the freezer with a batch number, and if anyone reports a suspected case, it is sent to the lab.”

Neophytou has come a long way since standing on a Coke crate, aged nine, making toasted sandwiches in her parents’ Lydenburg Wimpy, but the love for cooking and food passed on first by her parents, and then mother-in-law, remains.

“Restaurants are a labour of love. You have to add passion; people have to taste the love in the food.”

The words generous hospitality might be a cliché, but they are certainly true for Neophytou. I leave laden with distinctive olive leaf-embossed boxes filled with an array of cakes, including her decadent, spicy baklava. Since our meeting, all I can think of is her mention that she had considered opening a branch in my neighbourhood. Come on, what’s just one more store? DM/TGIFood