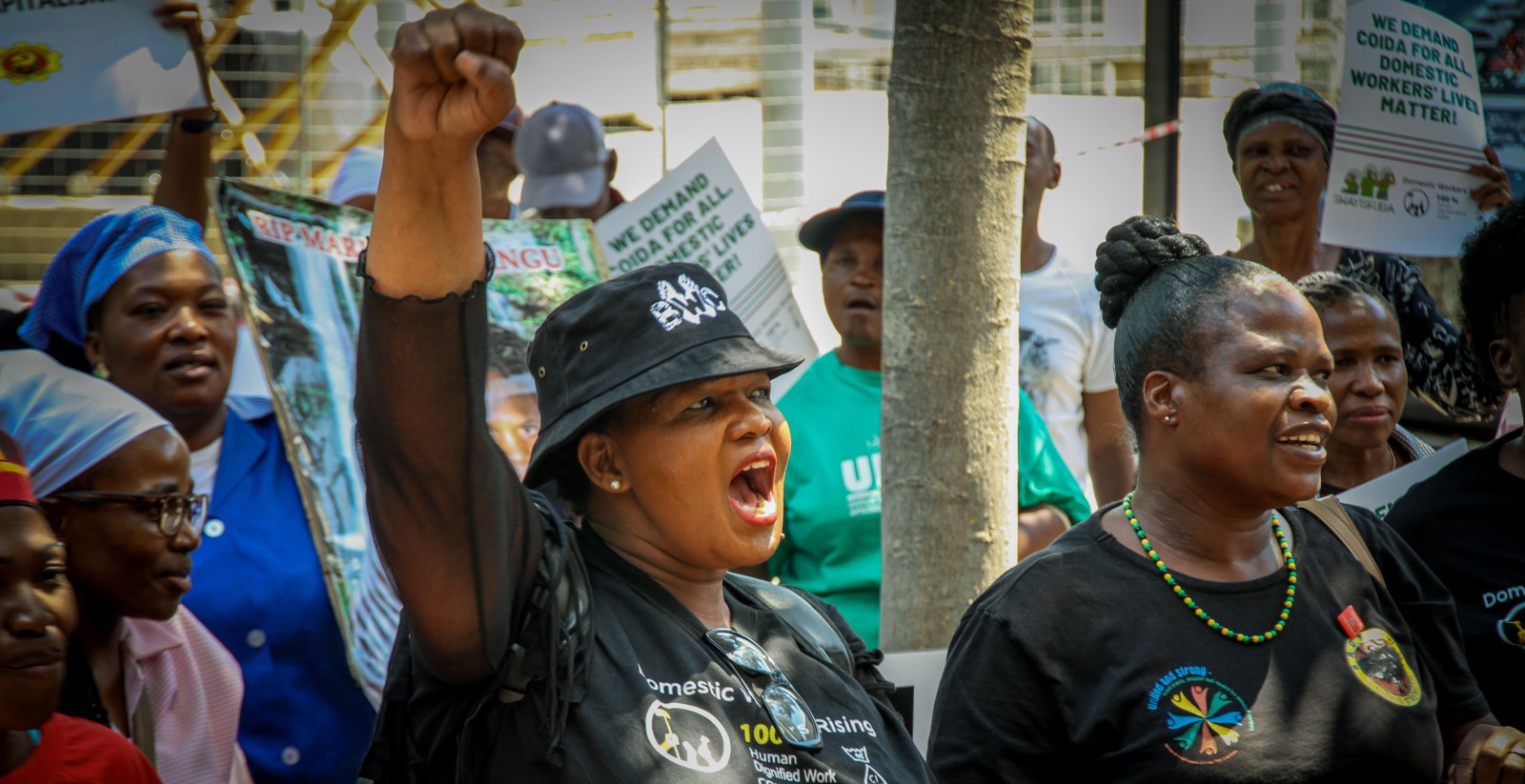 Members of domestic workers’ unions and allies gathered at the Constitutional Court on Tuesday, 10 March 2020. Photo by Sumeya Gasa

Domestic workers are the country's unsung heroines and must have access to the Compensation Fund. This ruling, made on Thursday by the Constitutional Court, overturned the law that made domestic workers the only group of employees who couldn't claim compensation in the event of injury or death.

“Domestic workers are the unsung heroines in this country and globally,” begins the Constitutional Court judgment, penned by acting Justice Margie Victor, in Mahlangu v The Minister of Labour.

“Their salaries are often too low to maintain a decent living standard but, by exceptional, if not inexplicable effort, they succeed. Sadly, despite these herculean efforts, domestic work as a profession is undervalued and unrecognised, even though they play a central role in our society.”

The Constitutional Court ruled that a provision in the Compensation for Occupational Injuries and Diseases Act (COIDA), which excludes domestic workers from being able to claim from the Compensation Fund in the event of injury, illness or death, are unlawful and violate the rights to social security, equality and dignity.

The court upheld judgments issued in the North Gauteng High Court in 2019 that said the provision must be struck from the law and domestic workers must be able to apply to the fund retrospectively, with effect from 27 April 1994.

That means workers and their family members will be able to make claims for injuries or deaths that occurred in the last 26 years.

The court found there was no legitimate reason to exclude domestic workers from COIDA, and the law entrenched patterns of disadvantage defined by race, sex and gender.

Members of SAPS and the SANDF are also excluded from COIDA, but can make compensation claims under other schemes, which left domestic workers the only sector of workers not covered.

The minimum wage for domestic workers is R15.57 per hour compared to the general rate for most other workers of R20.76.

“To allow this form of state-sanctioned inequity goes against the values of our newly constituted society, namely human dignity, the achievement of equality and ubuntu,” read the judgment.

The court said it took an unprecedented approach to the discrimination of domestic workers by applying an intersectional prism to their plight.

“Domestic workers, the majority of whom were – and still are – black women were denied both a family life and a social life.

“They lived in poor conditions devoting more time to caring for the children of their employers, than their own,” reads the judgment.

“The exclusion of domestic workers from the protections under COIDA has resulted in a situation where domestic workers have for decades into our democracy, had to bear work-related injuries or death without compensation.”

It said the exclusion trapped domestic workers and their dependents in a cycle of poverty, which is a legacy of the country’s colonial and apartheid past.

“They are a category of workers that have been lamentably left out and been rendered invisible. Their lived experiences have gone unrecognised.

“It took the tragic death of Ms Mahlangu to bring this egregious form of discrimination into vivid focus.”

Sylvia Mahlangu challenged the law after her mother, Maria Mahlangu – who the judgment said was “alleged” to be partially blind and couldn’t swim – drowned in the pool at the Pretoria home of the De Clercq family.

Mahlangu had worked for the family for 22 years and, after her death, Sylvia sought compensation from the department of labour, which told her that she wasn’t eligible as domestic workers are not recognised as employees under COIDA.

Thursday’s Constitutional Court ruling stated, “The exclusion demonstrates the fact that not only is domestic work undervalued, it is also not considered to be real work of the kind performed by workers that do fall within the definition of the impugned section of COIDA.

“One can only imagine the pain of these women who work graciously, hard and with pride, only for their work and by consequence them, to go unrecognised.

“This amounts to domestic workers themselves not being treated with dignity.”

The respondents, labour minister Thulas Nxesi, the department of labour’s director general and the acting compensation commissioner, did not oppose the application but claimed that applying the judgment retrospectively could overburden the Compensation Fund.

The court said the respondents did not provide sufficient evidence to support their claims.

It added that the department has shown it has the capacity to successfully administer COIDA in the domestic sector after it implemented the Unemployment Insurance Act for domestic workers.

The judgment said the exclusion was “an egregious limitation of their right to dignity, alongside its infringements on their other constitutional rights.

“It extends the humiliating legacy of exclusion experienced during the apartheid era into the present day, which is untenable.”

It continued: “The invalidation of section 1(xix)(v) of COIDA will contribute significantly towards repairing the pain and indignity suffered by domestic workers. It should result in a greater adjustment of the architectural focus as to their place and dignity in society.

“Not only should this restore their dignity, but the declaration of invalidity will hopefully have a transformative effect in other areas of their lives and those of their families, in the future.” DM