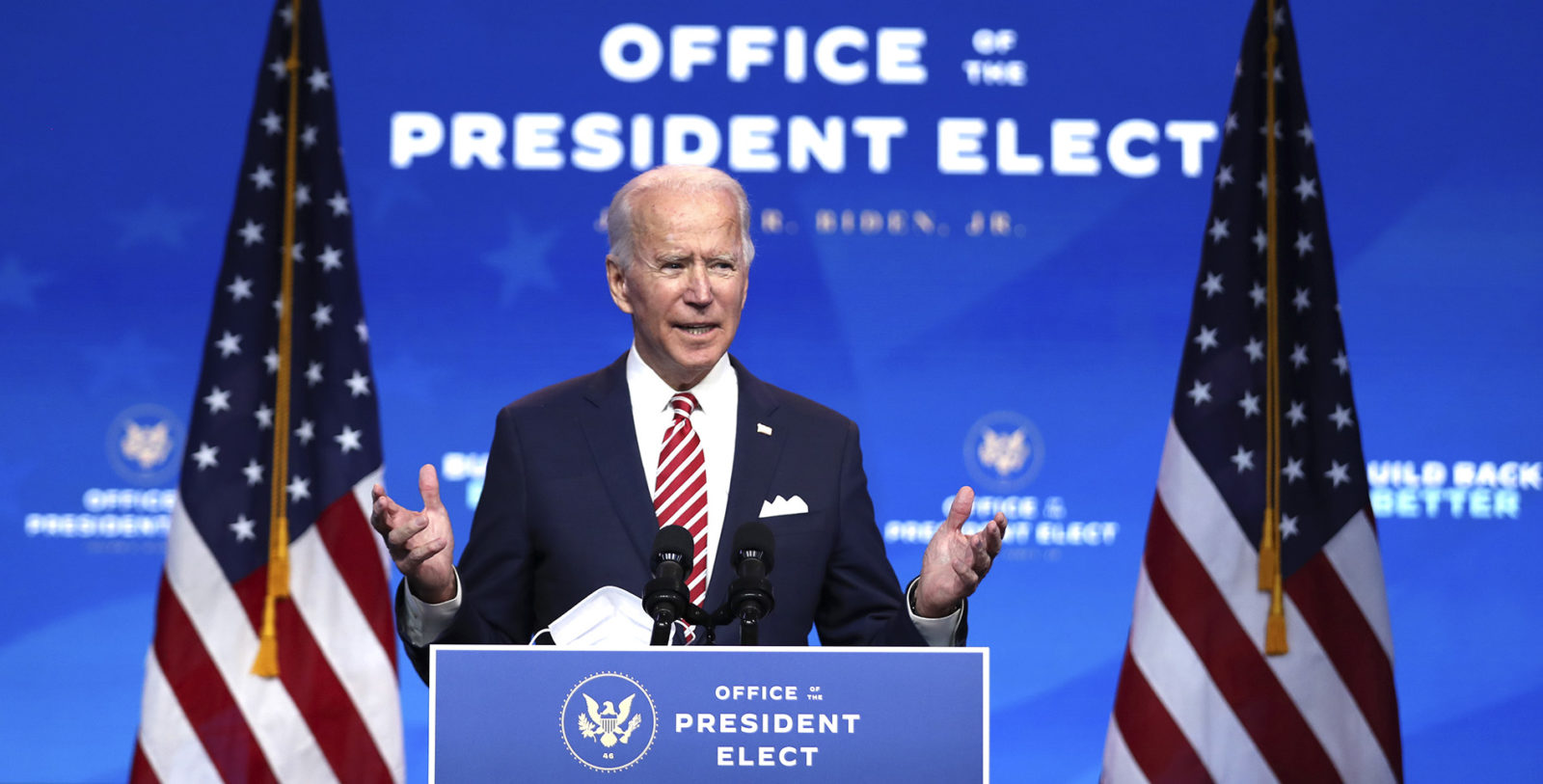 While US president-elect Joe Biden has favoured greater US engagement with Africa to counter growing Chinese influence on the continent, it seems unlikely that his foreign policy for the continent in relation to China will significantly differ from Donald Trump’s economic containment strategies.

Over the past four years, the stated aims of the foreign policy of the Donald Trump administration included a focus on security by fighting terrorists abroad and strengthening border defences and immigration controls, an expansion of the US military, and an “America First” approach to trade and diplomacy.

Trump’s Africa strategy not only focused on advancing US economic interests in Africa, but also sought to economically contain China’s impact on the continent. The key focus of the strategy was to counter China’s commercial, security and political influence in Africa, which has been solidified through deepening economic engagement, closer security cooperation and high-profile diplomacy epitomised by the Forum on China-Africa Cooperation (FOCAC).

FOCAC became China’s most prominent development initiative after 2000, and in 2009 China not only surpassed the US as Africa’s largest trading partner, but also became the most promising source of funds for African infrastructure development.

The concept of “containment” that Trump utilised was built on the foundational strategies of the Cold War era, and is a selective application of policy initiatives designed to bring about policy change in target countries. This coercive package of primarily punitive economic measures, while reminiscent of historical containment strategy, was applied selectively and with a narrower scope by the Trump administration.

Containment, of course, was a geopolitical strategy advocated by diplomat and historian George Kennan in the late 1940s as part of the Truman doctrine to stop the expansion of the Soviet Union and its allies during the Cold War. In 1960, Kennan revised his doctrine and stated that it was a vital US interest to erect “firm barriers” to what he characterised as “contemporary Chinese imperialism” regarding the coast of East Asia. Basically, the US concept of containing China on the global platform is not a new phenomenon.

Prior to the Trump administration, former presidents George W Bush and Barack Obama had also rejected former president Richard Nixon’s China engagement by applying a set of US policies which have been routinely characterised as containment, designed to limit China’s influence. Needless to say, the Trump administration, unlike previous US administrations, pushed back more aggressively against China through various measures such as trade tariffs, containment measures that would strengthen US hegemony and banning Chinese multinational technology company Huawei Technologies.

In an effort to economically contain China in Africa, the Trump administration came up with alternatives such as the International Development Finance Corporation (DFC) development bank, which was expected to increase US investment in lower-income countries in Africa.

Congress also passed legislation called the BUILD Act. This law doubles the available US government investment capital from $29-billion to $60-billion, offering promising opportunities for more direct US investment in Africa. Notably, the figure of $60-billion is exactly the same as China’s pledge of financial support for Africa at the FOCAC summit in 2018.

However, Trump’s economic containment of China in Africa over the past four years has done little to dent China-Africa economic relations, which remain economically strong despite the Covid-19 challenges. A further review of President-Elect Joe Biden’s foreign policy positions during the campaign demonstrate a continuation of the economic containment of China, but through a multilateral approach.

Bloomberg reports that Biden’s biggest shift from Trump’s foreign policy will likely be his approach to allies. While Trump has attacked traditional American partners like Japan, South Korea and Europe for “free-riding on defence commitments” and “cheating at trade”, Biden has promised to work with them closely to compel Chinese cooperation on priorities ranging from business ties with Hong Kong to 5G technology.

While Biden may renegotiate trade deals, little is expected to change between the US and China as Biden repeatedly called China a competitor. Neither can Biden afford to be viewed as being soft on China after the hard rhetoric of his campaign. A tough stance on China has broad support across the US political spectrum, as both the Republicans and Democrats jointly passed several pieces of legislation regarding China without any political bickering.

In his essay on Why America Must lead Again, Biden emphasised that “to win the competition for the future against countries like China, the US must sharpen its innovative edge and unite the economic might of democracies around the world to counter abusive economic practices”.

Aside from a multilateral approach, minus the plethora of tweets and combined with a less aggressive tone, it seems unlikely that Biden’s foreign policy for Africa in relation to China will significantly differ from Trump’s economic containment strategies.

It is, of course, critical to question whether US economic rivalry with China will change and whether it will continue to influence continental import-export trade. Although Africa was not the direct target of the US-Sino trade war, US tariffs have heralded plunging African commodity prices, local currencies and major equity exchanges. Regarding Biden’s foreign policy the more important question is whether African economic interests feature strongly in US economic diplomacy or whether it will be business as usual.

…any measures to contain China’s economic diplomacy in Africa are destined to fail, whether they are channelled through Trump’s approach or Biden’s strategy of greater US engagement with Africa to counter growing Chinese influence.

African leaders have welcomed the incoming US president after his electoral victory, expressing hope that Biden’s win will boost trade and other relations between the continent and the US. Unlike Trump, Biden also has favoured greater US engagement with Africa to counter growing Chinese influence on the continent.

While it is possible that economic diplomacy measures such as Obama’s US-Africa summits may resurface, the question remains as to how China’s influence can be effectively countered. Moreover, there was minimal reference to stronger economic diplomacy in Biden’s speeches or campaign policy documents.

Africa policy studies specialist John Campbell points out that Biden’s campaign document with regard to Africa was addressed to a specific group of actual or potential voters, mainly Africans and those of African descent living in the US, not the continent. Nevertheless, the campaign was careful not to over-promise. There was no reference to an increase in US federal spending on African aid and development, nor were there commitments to deeper US involvement in Africa’s security challenges.

While Biden has been referring to some of the Obama administration’s policies during his campaign, it does not mean that he has always been in support of all Obama’s foreign policy measures. For example, he opposed the military intervention that ultimately toppled Muammar Gaddafi in Libya.

In the final analysis, any measures to contain China’s economic diplomacy in Africa are destined to fail, whether they are channelled through Trump’s approach or Biden’s strategy of greater US engagement with Africa to counter growing Chinese influence.

Even prior to the Trump era, Washington never really made a concerted effort to utilise economic diplomacy or develop coherent trade strategies for Africa based on reciprocity. China’s ever-increasing interests in Africa in the 21st century, on the other hand, have been embraced with much gusto by many African leaders as an opportunity to initiate economic “take-off”.

Being a friend of the African continent in the current post-Covid landscape requires less emotional rhetoric and more critical action-based policies. Through FOCAC, China has managed to facilitate practical measures on the continent such as infrastructure development through, among others, dams, roads and railways.

Instead, the US needs to reassess its approach to African politics, because Africa is now looking at its global relationships with a more critical, pragmatic business lens as it seeks to build partnerships that deliver on concrete and time-specific needs. The diversification of Africa’s relationship with external partners now not only includes traditional Western partners, but also Asian, Middle Eastern and Gulf countries that have contributed to increasing Africa’s prominence and agency in the global arena. These developments are accompanied by growing assertiveness on the part of African countries, institutions and citizens in taking the lead in framing Africa’s future.

Over the next four years, Biden needs to develop a clear, comprehensive bipartisan long-term vision for its US-Africa policy that is aligned to the African Union’s Agenda 2063. In the final analysis, US-Africa relations will be measured more by US economic policies and economic diplomacy towards Africa than those of China-Africa relations. DM/MC

Funeka Yazini April is co-ordinator of the BRICS Research Centre in the developmental, capable and ethical state research division at the HSRC.

Get the shovels out: Death of the coal industry must bring new beginnings in Mpumalanga