Peak of the week 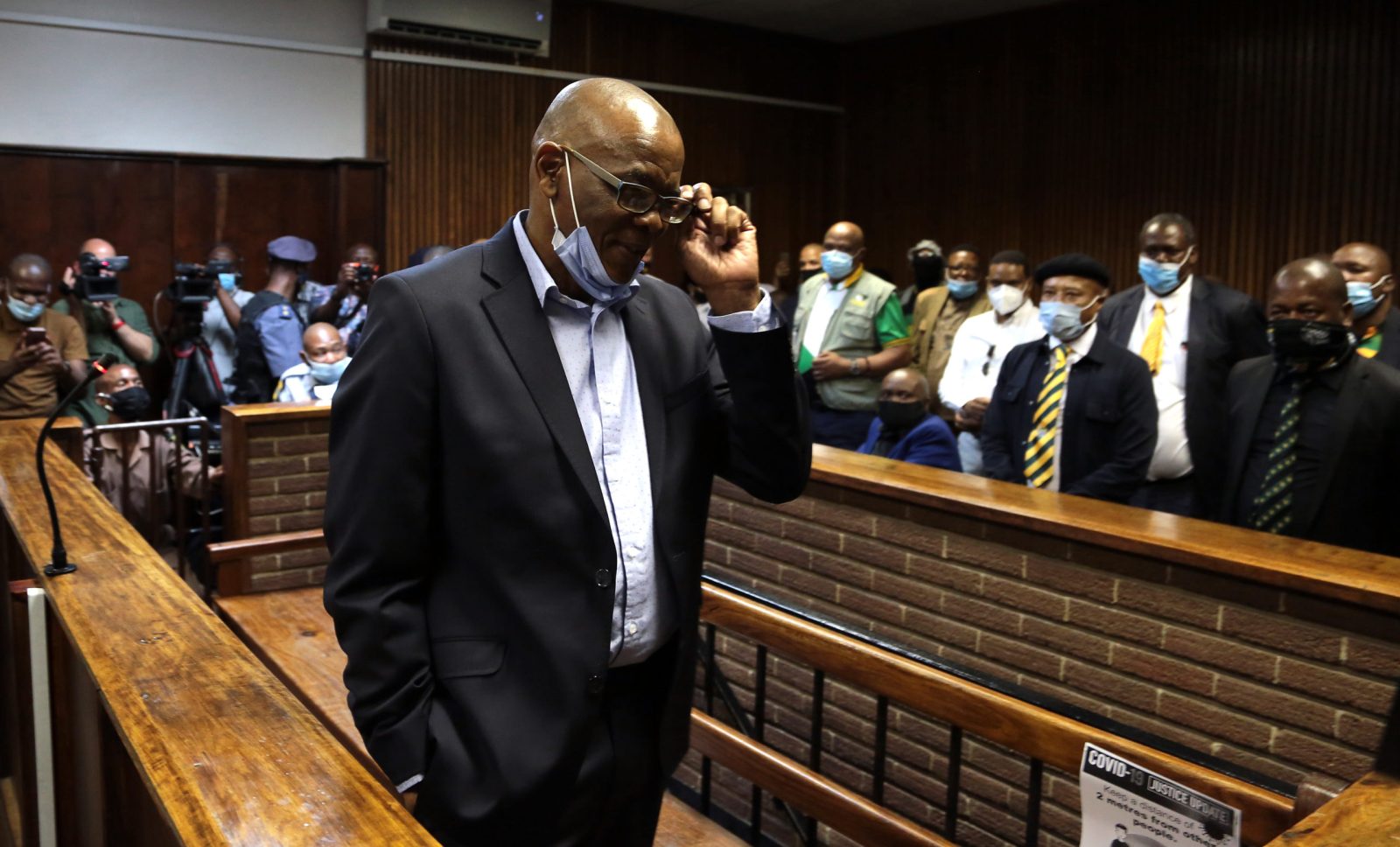 Ace Magashule secretary general of ANC during his appearance at the Bloemfontein Magistrate court in connection with the Free State asbestos housing scandal Photo:Felix Dlangamandla/Daily Maverick

This is a summary of the trending, highest impact and most active themes and their narratives related to social cohesion and division in South African public-domain social media conversations for the week ending 19 November 2020.

Magashule’s supporters organised bus transport to Bloemfontein from across South Africa. Some hailed Magashule as the next South African president and warned President Cyril Ramaphosa: “Friday we will see the real ANC of Oliver Tambo. Ramaphosa has touched the wrong person who against all odds, still emerged as a winner in Nasrec.#HandsOffAceMagashule,” tweeted Marxist. 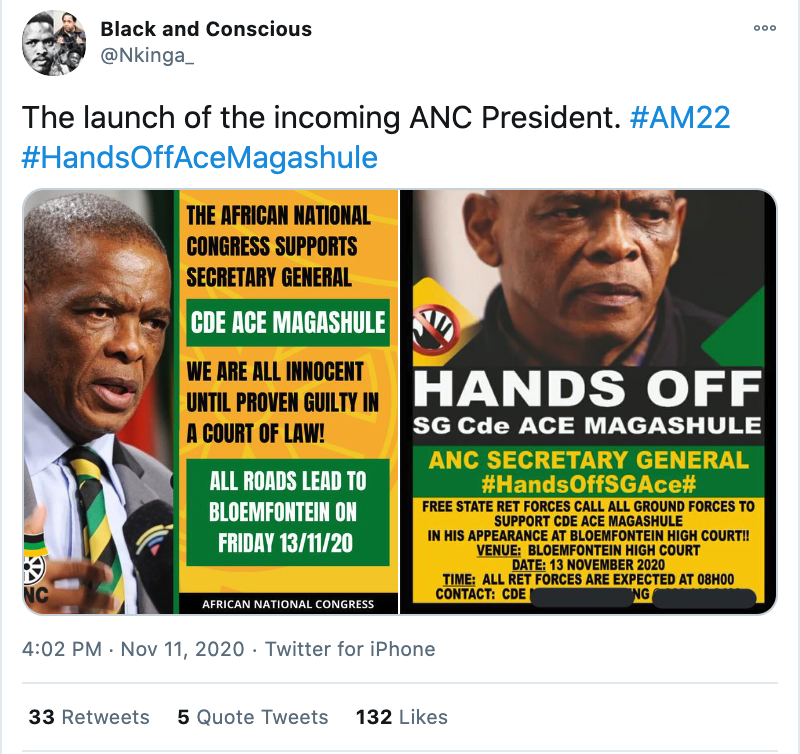 Senior ANC members supported Magashule during his court appearance, with NEC member Tony Yengeni joining the group of protestors outside court, stating: “The SG of ANC is going nowhere… he will finish his term.”

An opposing faction decried the transporting of supporters to the court hearing.

@_goldtrash tweeted: “This is one thing I don’t understand honestly. Having campaigns for people who are facing the law? If people are innocent, let the law declare them as innocent. Not a kangaroo court or a court of public opinion. #handsoffacemagashule.”

MJ Ncube shared: “Instead of fighting unemployment, they’d rather fight for a man who is accused of stealing from them. My people are weird. #AceMagashule.” 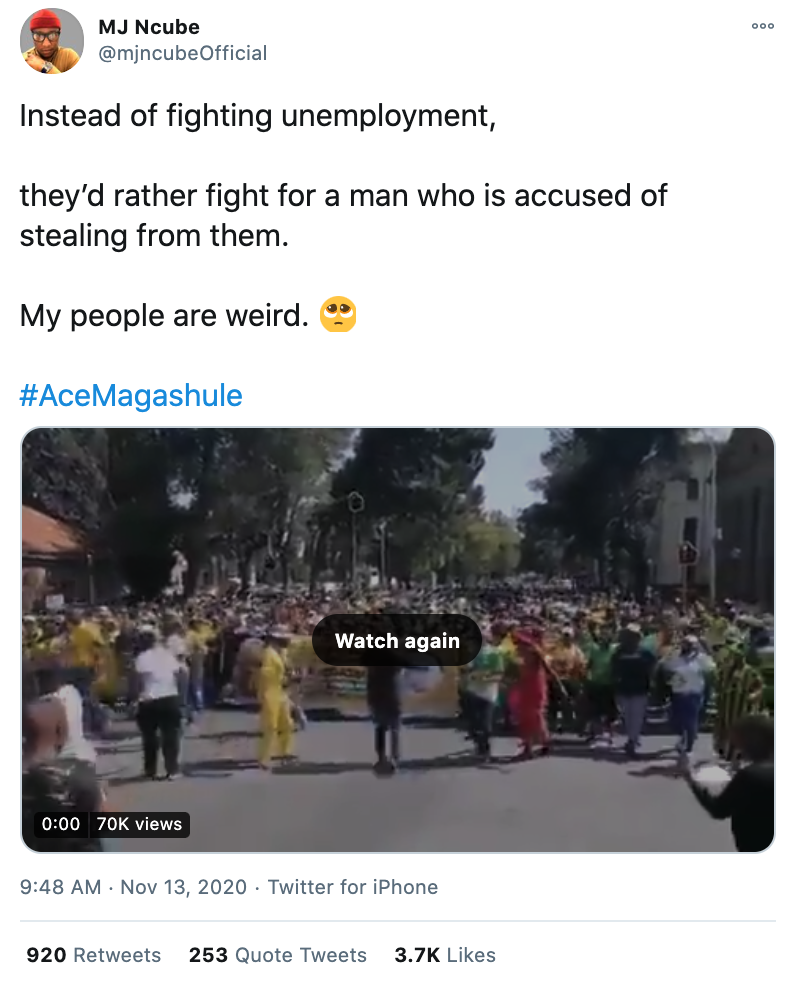 Others felt the money spent on the buses could have been used to fund empowerment initiatives.

Nwabisa Makunga found it ironic that people endangered their health for someone who allegedly stole housing money: “Imagine traveling from where ever to go sleep in a bus somewhere in the Free State, in the middle of a pandemic, to support a guy accused of stealing public money from which you never got a cent.” This tweet received over 1,300 retweets.

After his court appearance, Magashule claimed he knew of corrupt individuals within the ANC but had the “discipline” not to expose them.

Twitter users reacted with shock: “He admitted to knowing about criminal activity but not reporting it and the crowd cheered. Maaaaan we’re never making it outta the hood,” tweeted Lesilo Rula, with over 6,300 likes.

Ace Magalema shared: “Just to be clear: it’s now considered ‘discipline’ to keep knowledge of wrongdoing, corruption, theft and acts of treason towards the people of this country a secret? This organisation should be ashamed of themselves. #VoetsekANC.”

Phumlani tweeted that ANC members have become arrogant and desensitised to South African struggles: “Listening to Ace Magashule today reminded how arrogant and disrespectful the ANC is. And they don’t give a damn. Because they know come elections they’ll be voted back to power again. Pathetic politicians and their egos!” The tweet received over 400 likes.

A satirical trend emerged on Twitter this week as users posted memes taking jibes at the performance of some Cabinet ministers.

The trend emerged after this post by @_Buhlez of basic education minister Angie Motshekga alongside an image of children standing in line outside a rudimentary school building. The post was retweeted more than 3,000 times and received close to 5,000 likes. 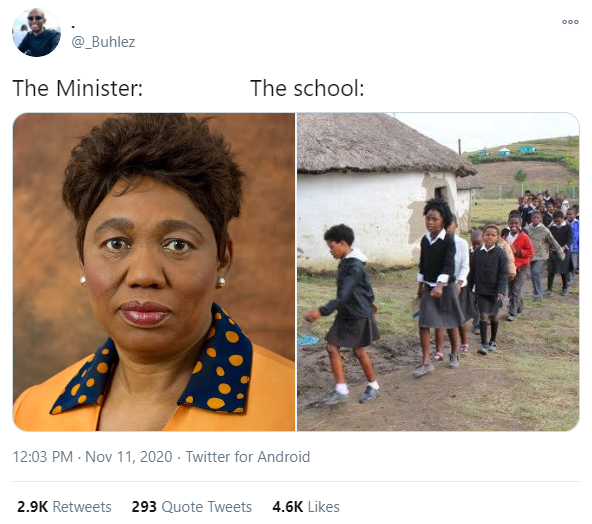 @Keydeekgomokabo followed with a photo of human settlements minister Lindiwe Sisulu dancing in the street, next to an image of congested shacks in an informal settlement. This comment was retweeted more than 500 times and received over 900 likes.

Former DA leader Mmusi Maimane got behind the trend and tweeted a photo of Motshekga alongside a screenshot of a Daily Maverick article: “R22m spent on school – and there is only the foundation to show for it.” His post was retweeted more than 1,000 times.

Transport minister Fikile Mbalula was next in line for a lashing. @mpumz_n tweeted: “The Minister. The road…” – images of Mbalula popping expensive Veuve Clicquot champagne next to an image of what is allegedly “Lucas Mangope Road in the North West”. The Twittersphere received the image well, retweeting it more than 1,600 times and liking it close to 4,000 times. 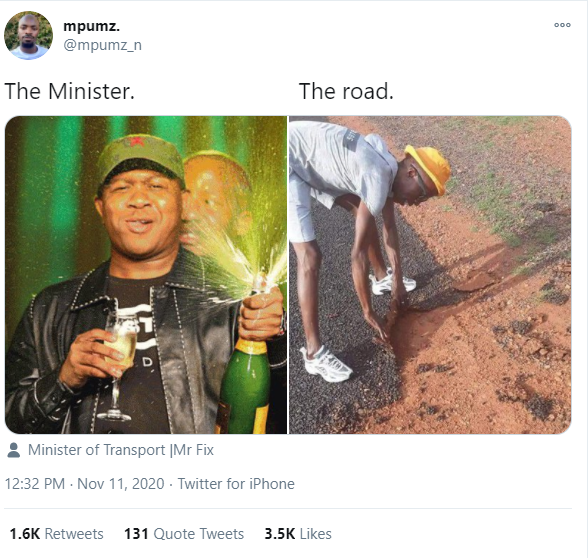 Police minister Bheki Cele was shown alongside a photo of a civilian sitting on top of a police van drinking a quart of beer. 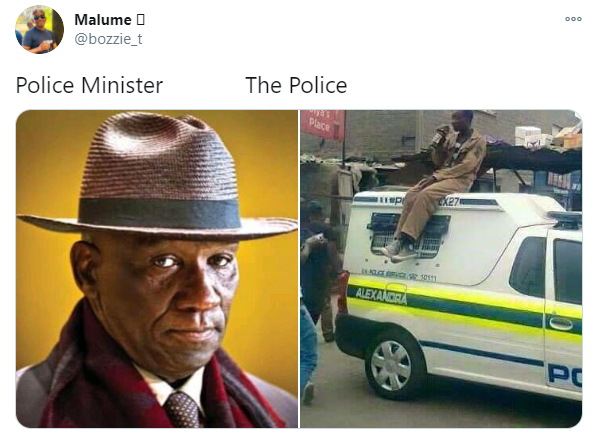 Public works and infrastructure minister, Patricia De Lille, appeared next to an image of a gaping hole in the border fence.

Two hashtags being used to bash foreign nationals – #PutSouthAfricaFirst and #PutSouthAfricansFirst – trended on Twitter again this week, with 7,269 and 3,719 mentions, respectively.

This week’s xenophobic rhetoric was aimed at supporting the movements’ unfounded claims, including South Africa’s unemployment statistics, foreign policy on immigration, the number of foreign nationals said to be living illegally in South Africa and churches led by foreign nationals.

@RealLwaziMsomi tweeted: “SA has to be the only country in the world where you’d have multiple university accolades and still be unemployed while overtaken by a foreign national with no documentation and who didn’t even finish Grade 10. SA is a sketch comedy shame. #unemployment #PutSouthAfricaFirst.” This post generated 147 retweets and nearly 1,000 likes.

@Maps_pj suggested South African citizens “storm workplaces dismissing foreigners” because “we are the beneficiaries of the Struggle for Freedom, not foreigners.” This was echoed by @NokuthulaMolef8 who shared concerns about being unemployed, indicating that South Africa needed “a President like Trump”.

@Kgomo389 tweeted: “EFF needs to relook at their border stance. When people demanded land, ANC changed and sang a new tune. EFF it is not late to change your foreign policy and start to #PutSouthAfricaFirst. 11 million South Africans are unemployed.” This was retweeted 121 times and liked nearly 700 times.

An unfounded rumour claiming that 15 million immigrants are living illegally in South Africa is gaining traction, despite the absence of proof. @Maps_pj tweeted: “We have over 15 million illegal foreigners? Home Affairs doesn’t know who they are and what they’re here for. Public Works knows that they enter via the open borders. Labour Dept. doesn’t know how many are illegally working in our labour market. #PutSouthAfricaFirst.” This tweet generated nearly 150 retweets and 329 likes.

The next day former Johannesburg mayor @HermanMashaba included this claim in a tweet: “1. 15m undocumented foreigners in South Africa, some occupying jobs that can be done by our own people 2. Billions of dollars of counterfeit goods by undocumented foreigners into SA. 3. They have destroyed SMMEs in Black communities. It is against our laws to be illegal.” This post generated 614 retweets and over 1,200 likes.

Many posts that denounced Mashaba’s unsubstantiated claim did not gain traction.

@BlackCulture_HM shared: “The leadership of the gangsters of #PutSouthAfricaFirst Herman Mashaba is misleading citizens, where do you get this madness numbers, all researchers are saying it’s 3 million”. This tweet received only five retweets and 42 likes.

@Shokwakhe16 shared a photograph of people dressed in white gathered in an open field: “Bese kuzoba these Zimbabwean churches that are mushrooming everywhere. We cursed with neighbours from hell #PutSouthAfricanFirst.” This tweet generated nearly 100 retweets and 353 likes. DM