Marc Shoul (Part One): Man on a mission to capture the world 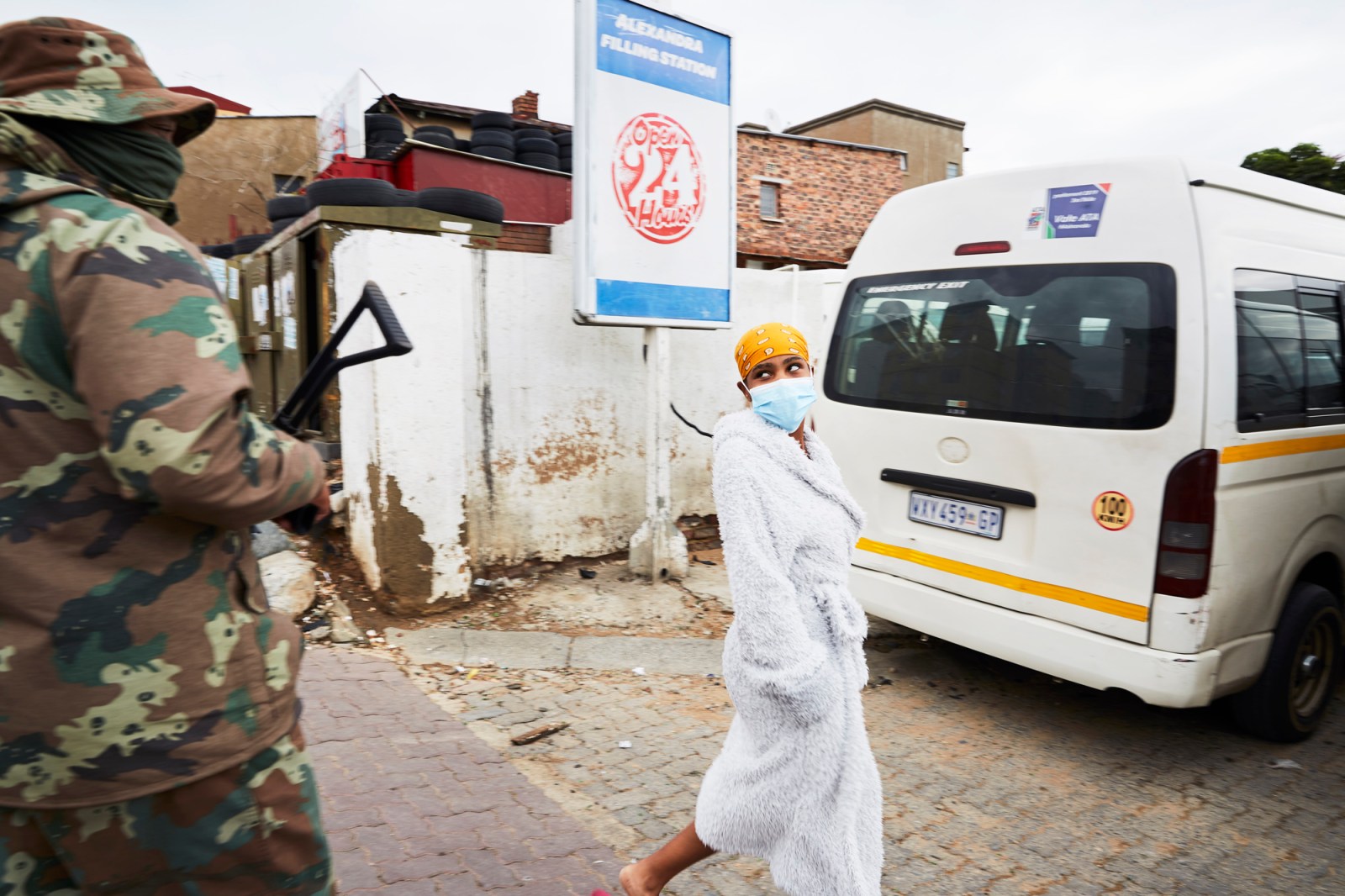 A young lady rolls her eys as she gets teased by a patroling army officer, during lockdown due to coronavirus, Alexandra, Johannesburg, South Africa, 2020 (Photograph: Marc Shoul)

Marc Shoul has spent his years photographing the South African streets and beyond. His images give a raw look at the world around us.

It’s difficult to conjure up more starkly opposite characters than those of Hugh Masekela and Eugène Terre’Blanche. And yet, during Marc Shoul’s photography career, these are exactly the contradicting characters he explored.

In a loose collection of images he has taken over the span of his career, entitled Portraits, photographs of the two men are displayed side by side – Terre’Blanche seems to be pensively staring into the camera; Masekela is laughing, exuberant, the image filled with life. The photograph of the South African musician was taken in Shoul’s own flat; he remembers that moment as “magical”, adding, “I played a bit of guitar with him. It was just… Incredible. That night will remain one of the most memorable times.”

But there are many more characters, famous and less famous, who posed in front of his lens, and Portraits is a collection of images he has gathered across cities, countries and cultures.

His portraits are often people he encounters. “I suppose it’s something that I see of myself in the subject matter that I can relate to. When I do come across somebody that genuinely interests me, I’ll strike up a conversation and go from there,” says Shoul.

Although sometimes they are assignments, as it was with the image he took of Terre’Blanche, after a foreign publication asked him to document a speech Terre’Blanche was making in Ventersdorp in 2009 calling for the return of the Afrikaner Weerstandsbeweging.

“When [Terre’Blanche] had finished speaking, I saw a gap. I said, ‘Mr Terre’Blanche, might I take a picture of you?’ and he agreed. And he started walking away after the first photo and I said, ‘Can I get another one?’ and we took another two before he walked away.

“Terrible man, terrible thinking and all that stuff. Listening to all the rubbish coming out of his mouth… he did it all very convincingly. He was a brilliant actor, like most politicians are brilliant actors,” says Shoul.

The photographer, who studied in Port Elizabeth, was obsessed with National Geographic and Time magazine – “I would dive into them and escape through the images” – and graduated with a degree in photography from the Port Elizabeth Technikon, now known as Nelson Mandela University, in 1999. Since then, he has been photographing the world around him, infusing his work with his upbringing, experiences and emotions.

Says Shoul: “When an image speaks to me, it makes me feel. Every now and again… I come across works that make me stop in my tracks. I have a deep love for imagery, because of the power that I see in them.”

In his series Landsman, an ongoing project which details the South African Orthodox Jewish community, he tries to explore this “tight-knit community that, while steeped in tradition, finds itself negotiating the vagaries and flux of life in contemporary South Africa”. The photos show members of the Jewish community navigating births, marriages, funerals and many of the events that punctuate life, as well as symbols of Jewish life like a kosher label printing machine.

For his series Brakpan, the photographer explores the mining town, which he calls the town of “diminishing fortunes”. The black and white series, photographed between 2008 and 2012, shows everyday life in the gold and uranium mine town, here a school fête, there a Spar parking lot, a hotel lobby, that all tell the story of a town trying to find its place in modern-day South Africa.

Flatlands, which was shot between 2004 and 2006, is a body of work that explores inner-city Johannesburg, black and white images that move the viewer from joy to despair.

“It’s a fascinating part of our country, this small space of land that’s so built up. There are thousands of people everywhere from all over the world, trying to get by. I had just arrived in Joburg too, so there was an affinity between me and the subjects. My parents lived in that area when they were younger and I remember going to the Joburg CBD when I was younger and being fascinated by it. There’s an energy that is contagious.”

Covid-19 put a halt to most of Shoul’s projects. His latest endeavour was to document the EFF, especially at their events and rallies, hoping to understand this part of our political landscape better; instead, he decided to work on something different, that would capture a moment in our history – the series of photographs, raw, brutal, heart-wrenching, is called Time Between.

“I would traverse the city I have found, and share many stories of a nation at war, not only with a pandemic but also with itself,” is how the brief accompanying Time Between describes the works.

“I did it in a very short period of time. Usually my projects take forever, but I was constrained by the limited time that we were under lockdown [Level 5],” says Shoul.

The photos capture the lockdown, often enforced by the police and the army, as well as scenes of ordinary life amid the chaos of the pandemic. One of the images in the series shows a masked woman in a bathrobe walking past a soldier armed with a large gun. The photo was taken on 3 April and Shoul describes it as “a fleeting moment. Her eyes rolling at the army guy is testament to how most felt about the army presence.”

The series was selected for the Corona Call exhibition, which was exhibited in October in Berlin, and with further exhibitions planned in Nairobi, Lagos, Kigali and Cape Town. Till then, Shoul keeps exploring the world around him – a self-described “clown with a camera”. DM/ML