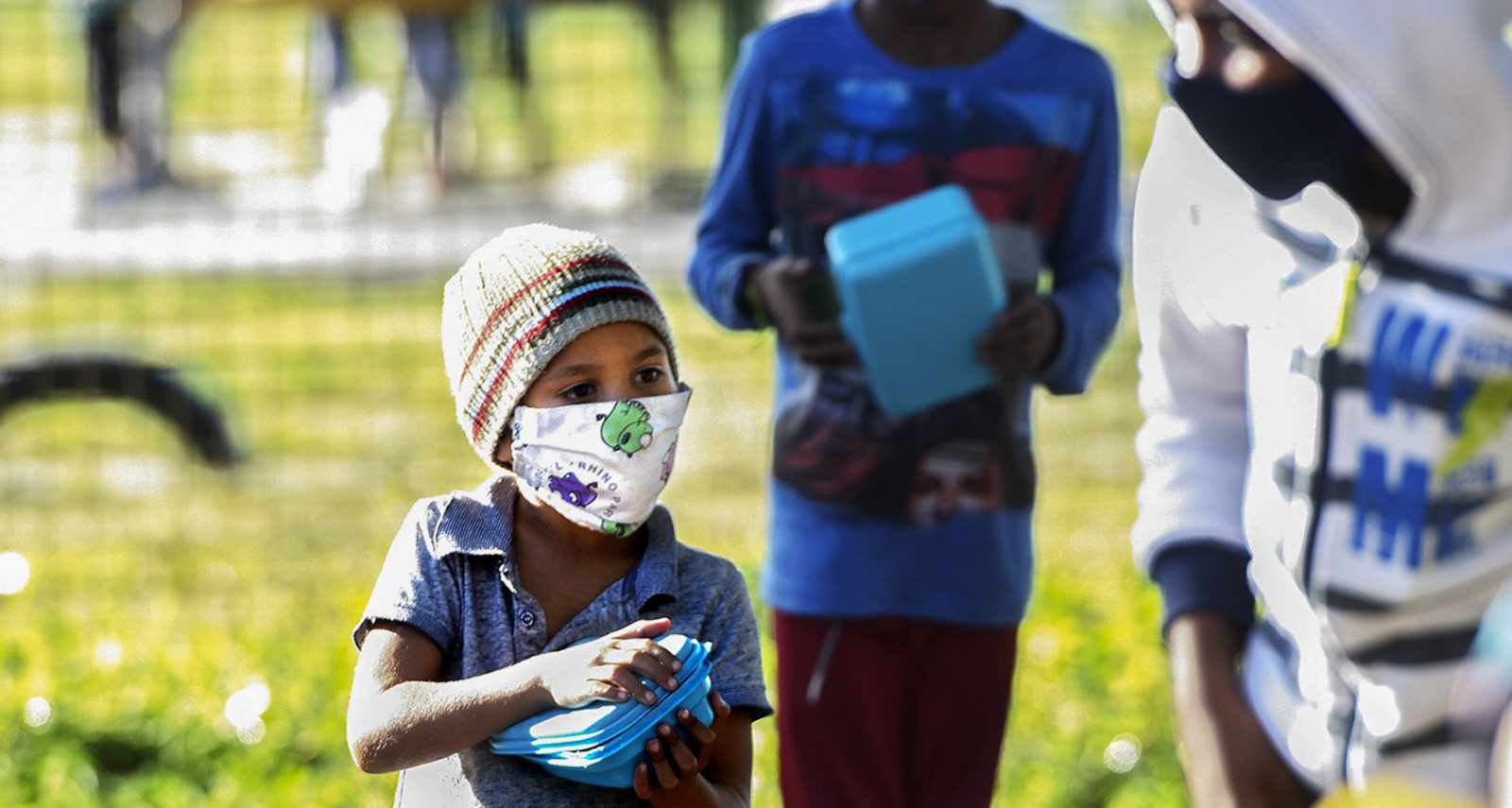 Most provinces continue to provide learners with hot meals daily at school, even for learners who are at home for medical reasons or rotating school timetables, says the writer. (Photo by Gallo Images / Rapport / Edrea du Toit)

Before the advent of Covid-19, the National School Nutrition Programme provided more than 9.6 million of South Africa’s most vulnerable learners with a nutritious meal every day at school. The programme, which operates in all quintile 1-3 schools in the country, is funded through a conditional grant.

For the 2020/2021 financial year, the National Treasury allocated R7.7-billion for the provision of school meals.

While this grant has not been subject to cuts or reprioritisations like other allocations to the basic education sector, the grant has also not received any additional funding now or over the medium term to deal with the additional cost burdens imposed by Covid-19.

R50-million of existing National School Nutrition Programme (NSNP) funding – labelled as “savings” from when the NSNP was suspended between March and July 2020 due to school closures – was repurposed within the grant in the June Supplementary Budget. This was used to pay for Covid-19 expenses such as sanitisers and personal protective equipment (PPE) for volunteer food handlers who prepare meals.

This aligns with Treasury’s decision not to allocate the basic education sector any additional funding to address challenges imposed by Covid-19. This has resulted in the use of already stretched budgets to pay for sanitisers, water tankers and mobile toilets, as well as extra mobile classrooms for social distancing.

Thanks to successful litigation from Equal Education and the school governing bodies of two Limpopo schools, represented by SECTION27 and the Equal Education Law Centre, the High Court of South Africa ordered education authorities to reinstate the NSNP for all qualifying learners, including those at home due to Covid-19. Provincial education departments were then required to develop new ways of getting food to learners.

Most provinces continue to provide learners with hot meals daily at school, even for learners who are at home for medical reasons or rotating school timetables. Learners are encouraged to use regular scholar transport to collect meals at school, even on the days where they aren’t expected in the classroom. Other provinces, such as Mpumalanga and the Northern Cape, have begun distributing food parcels to learners for the days they are not at school.

The Department of Basic Education (DBE) stated in July that it was worried it might run out of funding for the NSNP before the end of the year because of the increased prices of food parcels in comparison to the bulk meals usually cooked at school:

“The business planning process to date has determined that there are possibilities of budget inadequacy on the provision of food parcels during the latter months of the year (November and December 2020). This is due to the fact that the average NSNP meal cost per month is R63 per month, creating a shortfall of more than R100 when compared to the unit cost for a monthly food parcel,” said Basic Education Minister Angie Motshekga.

SECTION27, Equal Education and the Equal Education Law Centre received most provinces’ revised business plans on 2 November, with three provinces’ plans still outstanding. Despite new costs such as PPE and sanitisers, the plans indicate that these provinces have avoided running out of money for the programme by cutting NSNP events and using savings generated during the period where the programme was suspended.

Because food parcels are pricey, most provinces have not taken this approach and continue to provide learners with daily hot meals. But many learners can’t collect food on the days they are not required at school because of issues with scholar transport.

In a mid-October survey of 143 Equalisers (learner members of Equal Education), 94% of learners said they didn’t receive a meal on the days they didn’t attend school; 79 Equalisers needed transport to collect food; and 77 said they did not have access to scholar transport to do this. For as long as schools have rotating timetable systems, it’s likely that learners who have to remain at home on certain days will not be able to collect the meals that they are entitled to.

Distributing food parcels to learners to cover their nutritional needs at home, for those who cannot afford to travel to school every day to collect meals, would mitigate problems with scholar transport. The DBE maintains, however, that it categorically cannot afford to distribute food parcels to all learners for the days they are not at school, and that food vouchers “will not be feasible in the current financial year”. This is because, the DBE has said, “the NSNP… did not receive any additional funding for the delivery of meals/food parcels through scholar transport”.

Although the NSNP has been largely protected from reductions in expenditure, efforts made to expand its reach have, however, been hamstrung. In February 2020, Treasury announced a R123.1-million reduction to the NSNP conditional grant, stating that reductions would not impact on learners in quintiles 1-3 schools, but that expansion to needy learners in quintiles 4 and 5 schools would be “slower”.

In addition to the increased costs of food parcels, there is data that suggests that the cost of food has increased since funds were allocated to the NSNP. Between March and September 2020 – the months of economic lockdown – the price of 44 food staples increased by 7.2%. Compared with September 2019, the prices of a typical household food basket had risen 10.4% by September 2020.

The NSNP buys food in bulk, which means that the cost of providing meals to learners averages around R3 per learner. The DBE states that it has, in the past, been able to provide meals below food inflation due to economies of scale.

But the methodology used to determine the budget of the NSNP and whether the framework considers the cost of food as a key metric for determining price increases is, however, unclear. The conditional grant framework for the NSNP states that meal prices for primary school learners must increase by at least 4% annually, and for secondary school learners by 2%. These have remained static since 2016.

Would a year in which there has been such a unique economic downturn, rising unemployment and high rates of food inflation not warrant a review of the budget methodology for the NSNP? It might be necessary to interrogate the menu calculation process given the evolving context in which the NSNP is now forced to operate.

Although the NSNP has been largely protected from reductions in expenditure, efforts made to expand its reach have, however, been hamstrung. In February 2020, Treasury announced a R123.1-million reduction to the NSNP conditional grant, stating that reductions would not impact on learners in quintiles 1-3 schools, but that expansion to needy learners in quintiles 4 and 5 schools would be “slower”. Given the shocking new statistics of unemployment, and reported increases in hunger generally, there might be more learners who need the NSNP – including some in quintiles 4 and 5 schools.

In order to make sure that the programme reaches every learner who needs it, that the quality or portion sizes of hot meals are not jeopardised due to increased food prices, or to distribute food parcels to learners who cannot access scholar transport to collect meals, it is likely that the NSNP will need more money. On 6 August 2020, the DBE claimed it requested additional funding “for unavoidable and unforeseen priorities in an effort to cover the projected shortfall” but Treasury did not fulfil this request. It is crucial that government works together to ensure the same standard of delivery as before the pandemic, and protect against regressions to learners’ rights.

It is not sufficient for the government to say that such food parcels or vouchers are not “feasible” when they have constitutional and statutory obligations to protect learners’ unqualified and immediately realisable rights to basic nutrition and basic education. For this reason, we have written to the DBE and provincial education departments, urging them to increase access to food parcels by again “seek[ing] an increase to the budget for the programme to cover the increased costs of meeting its obligations”.

While the state’s efforts to ensure increased uptake of the NSNP since schools closed is certainly welcome, there is more work to be done to ensure the programme adapts and reaches all the learners that need it. DM/MC

Julia Chaskalson is a communications officer at SECTION27.