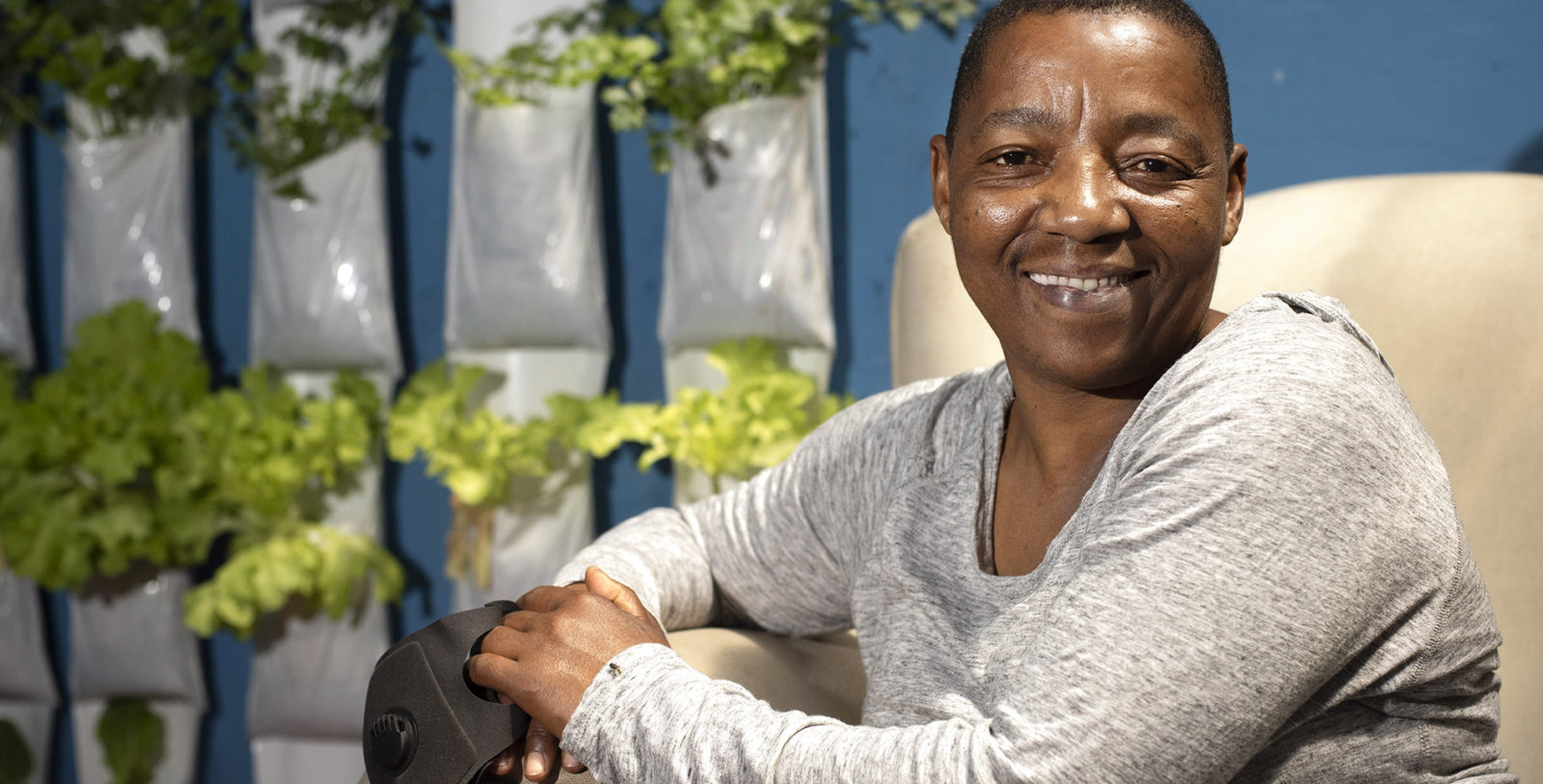 Joanie Hendricks of Tafelsig, Mitchells Plain in Cape Town has questions for the country’s leader: ‘Why isn’t President Ramaphosa managing our scarce resources in a way that everybody can eat? What about all that wasted money?’ (Photo: David Harrison)

From cooking for ministers in Tel Aviv to cooking for the hungry in Tafelsig, Cape Town, activist Joanie Fredericks plans to turn up the heat beneath President Cyril Ramaphosa in court over the hunger endured by many South Africans under lockdown while Covid-19 relief funds were plundered.

At the age of 28, Joanie Fredericks cooked Osso Buco for prime ministers and dignitaries at fine dining restaurant Meseret Keren, in Tel Aviv.

She was in Israel taking a break from labour in the apple farming valley of Grabouw, where she grew up to become one of the Western Cape’s first female forklift drivers.

“Israel, I’m telling you it’s supposed to be the Holy Land, but I’ve never seen people smoke so much dagga,” says Fredericks, speaking to Maverick Citizen over Zoom. The 51-year-old activist’s recollections are alive with mischief and humour, despite the hardships that have shaped her.

Today, she feeds 10,000 people on the Cape Flats every day. Of these, 500 meals are prepared at her home in Tafelsig, Mitchells Plain, where families queue from 6am. Whether feeding prime ministers or the poor, Fredericks goes full throttle. Describing herself as “full of fire” and “full of sh*t”, she is intent on taking President Cyril Ramaphosa to court for rampant hunger under lockdown as Covid-19 funds were looted.

To this end she has joined the Right To Food Campaign: “So we are a range of activists, academics and lawyers, looking at different strategies. You can rest assured I will not give up on my commitment to take the president to court. Our last strategy meeting was two weeks ago.”

Fredericks sits in a sun-washed courtyard in a wide white chair. Potted plants brush against a turquoise wall. She founded the Tafelsig Mitchells Plain Community Action Network at the start of lockdown Level 5; and with her “Change Champions”, prepares food at 20 feeding stations every day.

“Come, let me show you the kitchen,” she says, aiming her Zoom camera. Under an awning, next to three large cast iron pots, a woman peels carrots. “That is our cook, Auntie Nadeemah. She is just so good. Nadeemah, come here please. What are we eating today?” Nadeemah smiles shyly. “Carrot food. Carrots, peas, potatoes and rice.”

Supplies are donated from benefactors including Shoprite and Ladles of Love. Funds from Cape Town Mayor Dan Plato are used to buy cast-iron pots and gas cookers. Comedian Marc Lottering penned a song about Fredericks’ plight, “What about the people?”, and Springbok captain Siya Kolisi had previously stopped by.

Settling back in her chair, Fredericks continues: “We don’t send anyone away. Even the gangsters come here for food. I wake up in the morning and the whole road is filled with people waiting to be fed. Do you know how few people actually get their R350 government grants? So on Facebook, ANC members have attacked me for my criticism of the president. I don’t care, I don’t have time for politics. For me, it’s not about the ANC, the DA, the EFF. It’s about leadership. I will speak with whoever feeds my community.”

Fredericks lives with her partner Bernadette and her daughter Michelle. Growing up in Grabouw, she experienced difficulties in explaining her sexual orientation.

“Look, I’m lesbian,” she says. “But in Grabouw, in those times, people didn’t really understand. And there wasn’t a word for it. I definitely did not fit in with the women. I had more male friends. I could relate to them better in terms of conversing because the women were always just talking about babies and husbands and I was like: ‘Jesus, no.’ At least with the men, I could talk about forklifts and stuff.”

One of eight children, she recalls trying to stop her truck driver father from beating her mom, who worked in an apple factory. “Come Friday came the booze, the drinking right through until Sunday. Physical violence, hitting my mother. I will never forget this one particular Sunday morning. I think I was about 13. Our house was on a corner and people had to walk past on a Sunday morning to go to church. And I remember how, at one point, when my father was trying to hit my mother, I jumped in the middle to get his attention away from her. And he came after me. And I remember the church people looking as I was running around, him chasing me.”

Fredericks considered suicide but a brother arranged for her to see a psychologist in Somerset West. “So then I became the first female forklift driver in the Western Cape,” she beams.

She was raped at 15 “by the brother of my best friend. I had just gone to collect some books. And this guy followed me and grabbed me from behind. And I remember all this happening, and my house was just there. I could see my house.” She gestures to show proximity. “And I had this knife against my throat and I couldn’t do anything or scream. I remember being so helpless. You know, it keeps playing through my head.”

This was how Michelle was conceived.

“And I remember my father saying, look it’s not possible. And if it happened, you were looking for it. What were you wearing? My mother was sitting there. I could see she believed me, but she was powerless to defend me. And I think that’s what shaped me in the long run. My conviction to make a change.”

Fredericks considered suicide but a brother arranged for her to see a psychologist in Somerset West. “So then I became the first female forklift driver in the Western Cape,” she beams. “Oh my God. Like, basically all my brothers were forklift drivers. And I remember one year I was sitting at home with my youngest brother, he just finished matric. And there was a call for people interested to be forklift drivers. And it was the first time they actually invited women to apply, too. I was 19. All in all we were eight women who trained, but I was the only woman who got through. So I was the only female forklift driver amongst all the men, like some sort of queen.”

But her salary was lower than those of the men she worked alongside at the farm.

“I went to the manager to say, this is not on. And he said: ‘But you’re a woman.’ And I was like, ‘I’m a forklift driver, I do what they do’. So this forced me to start the first trade union for farm workers on the farm. I became deeply involved in conversations on bringing about equality. The other problem was sexual harassment of women. Obviously, there were huge, huge fights between us and management.”

Yet she had a good relationship with the farmer.

At 26, she felt burnt out. “I was just so tired. I wanted to take time out… And then it struck me out of the blue that it would be beautiful to go to Israel. Remember, at some stage in my life I was dragged kicking and screaming to church, and there was a lot of reading and talks from the Bible about Israel. I was intrigued. I decided, this is where I wanted to go. The farm’s owner, Mr Johan Beukes; I could speak to him about what I saw in the world, about how I felt. So I went to him. The minute I opened my mouth, I knew he was going to help me because it struck me that he liked me a lot, but that I was also giving him a lot of trouble.”

Beukes compiled a loan agreement and gave Fredericks R5,000 for flights and accommodation in Israel. The kibbutz system was an eye-opener: “I was particularly excited about this completely new cosmopolitan lifestyle. Where I came from, even if you were on speaking terms with a white person, it was always going to be ‘Meneer’ and ‘Mevrou’, it was never equal. But in Israel we had people from South Africa, kind of people like myself, people from Ghana, people from Holland… It was just beautiful. I really fell in love with Israel.”

Three years later a call from her mother summoned her home, where her family had been looking after Michelle.

“They were struggling with Michelle. So I came back. I was here for about two months when all hell broke loose. I was told that she had also been raped. She was 14. She also got pregnant. So my brother and I sat down and spoke. My daughter had an abortion because at the time we thought it was the best thing to do. After that, she had a terrible, terrible breakdown. And two months later she was diagnosed with bipolar mood disorder. She is on medication now, she is healthy.”

Fredericks pauses, her gaze level. “It’s like, I’ve seen it all. So when people come to me with their problems, I can relate.”

In 2018 she founded Ladies Own Transport Services in Mitchells Plain to “provide affordable access to tools and knowledge for township women to become courteous and professional drivers. And to escape poverty by gaining access to employment in the transport and deliveries industries.”

On the eve of lockdown, Fredericks organised food stock to be distributed around Mitchells Plain. As she continues to nurture her community in the wake of South Africa’s first wave of Covid-19, her pressing questions are: “Why isn’t President Ramaphosa managing our scarce resources in a way that everybody can eat? What about all that wasted money?”

Her resolve is to find out. DM