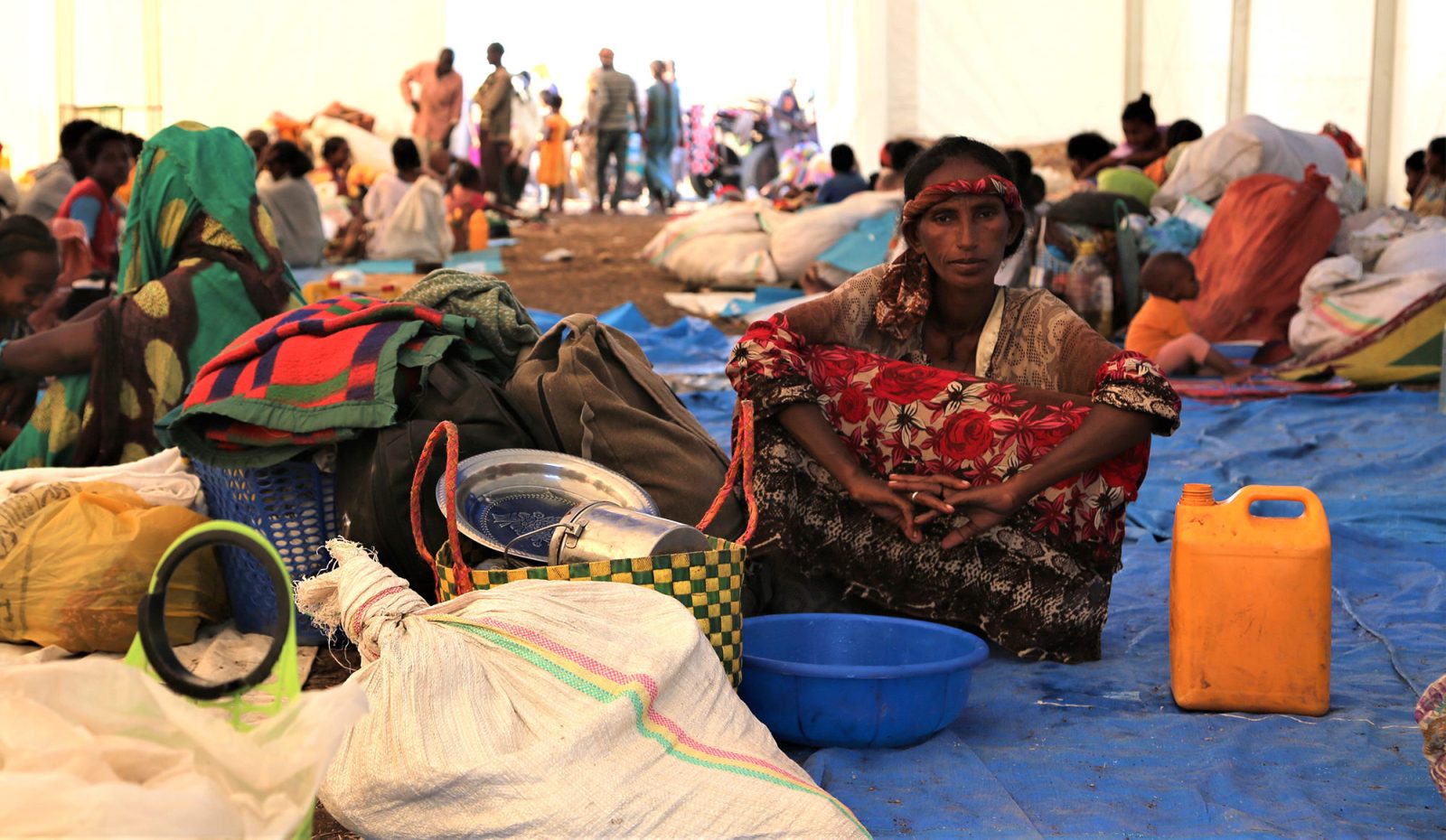 The war has already claimed thousands of lives, mainly civilians caught in the crossfire, and mimics the cruel war between Eritrea and Ethiopia two decades ago that wasted over 120,000 lives. (Photo: EPA-EFE/LENI KINZLI)

For too long, Ethiopian political history has been dominated by the elites of two minority groups, the Amhara and the Tigray. These elites considered people of the Oromo origin and others as subjects incapable of governing Ethiopia – but now an ethnic Oromo, Abiy Ahmed, is the prime minister. The current war in Tigray could be the last gasp of the Tigray People’s Liberation Front.

Ethiopia’s reputation as an African country never colonised by a European power is belied by the fact that ethnic chauvinists have politically dominated its multicultural peoples for almost 200 years.

Today’s needless war has its roots in this cursed history. Mythical Ethiopia was the land of serfdom, and the rulers’ brutality produced rebellions over the ages.

A progressive student movement challenged the feudal monarchy in the late 1960s and early 1970s. Still, the military hijacked the resistance and installed a most violent government precipitating open rebellions across the country.

The combination of the victory of the Eritrean liberation movement in 1990 and the tenacity of the Tigray People’s Liberation Front (TPLF) led to the regime’s collapse and Eritrea’s independence.

The TPLF took over Ethiopia and divided it into a centralised ethnic federation. Many Ethiopians momentarily celebrated the demise of the military.

Changing of the chauvinist guard

Meles Zenawi’s TPLF junta invited some of the opposition to a consultative conference, but quickly disqualified any political group that challenged its agenda.

Their first victim was the Oromo Liberation Front (OLF), representing the largest ethnic group in the country. The OLF was immediately designated as a terrorist organisation.

Zenawi’s TPLF created an umbrella party called the EPRDF (Ethiopian People’s Revolutionary Democratic Front), which consisted of various supplicant ethnic parties from the provinces. The promise of a democratic Ethiopia morphed into another ethnic dictatorship.

In 2005 Zenawi’s regime felt confident enough to hold a national election that was moderately open. Contrary to their expectation, the opposition parties won significant victories, including Addis Ababa’s municipality.

Dazed by this outcome, the regime acted ruthlessly and closed off all avenues of free expression. For the next decade, the regime shamelessly “won” 95% of the vote in every election. Public anger escalated, while the overseas opposition mobilised the youth in the country through social media.

The party appointed a new prime minister, Hailemariam Desalegn, from a “minority” community after Zenawi died in 2012. Still, the TPLF cadre controlled all the levers of power, including the security forces.

Most Ethiopians recognised the sham and continued their resistance to the regime. Desalegn finally resigned as prime minister and was succeeded by Abiy Ahmed. Ahmed’s rise to power was a political earthquake as he became the first Oromo leader in modern Ethiopia.

Elements in the EPRDF mistakenly assumed that Ahmed’s appointment would appease the Oromo rebellion and sustain the old Tigray-dominated order, but that was not to be. The dominant ethnic chauvinists were shocked when the new government declared its five-point agenda.

First, Ahmed and his team opened the gates of political prisons. Second, the PM doggedly pursued peaceful reconciliation with Eritrea. Third, he invited the overseas political opposition to return home. Fourth, he appointed a new independent election commission chaired by a woman who was a thorn in the side of the old order.

Finally, all the armed groups were allowed to return home and become politically active inside the country. The Nobel Peace Committee honoured Ahmed with the 2019 Peace Prize. These were awe-inspiring developments, but some political actors from the past regime were exceptionally unhappy about the turn of events.

First, the TPLF leadership lost its hold over national security as Ahmed’s team consolidated their grip on critical institutions to preempt a coup. Second, apprehensive of these changes, former leaders of the TPLF and most senior security officials left for Tigray and consolidated their authority while Ahmed was busy with the reforms.

Third, the TPLF leadership in Tigray continued to encourage its former supporters in other regions of Ethiopia to resist the change and subvert it. Ahmed and his team recognised this strategy but had hoped the TPLF would realise the futility of attempting to restore the old order.

Once the TPLF realised the impossibility of their return to power in Addis Ababa, they openly defied the authority of the federal government. One of the first significant points of contention was the postponement of the national election. Ethiopia’s election commission delayed the federal election initially set for August 2020 to 2021, due to the Covid-19 crisis.

The TPLF went ahead with the election in the province in August 2020 without the supervision of the national election commission and won all the seats. Ahmed’s government declared the vote null and void but did not take any military action against the TPLF.

Despite such restraint, the federal government has been concerned that tolerating such illegal acts could encourage lawlessness and intensify conflicts within the country, but hoped that cool heads would prevail.

Unfortunately, hot heads prevailed, and the trigger of this needless war was a TPLF attack on a federal military base in the province. Ahmed’s government considered the attack as the last straw. It reshuffled the top military brass and instructed federal forces to move against what they dubbed as renegades.

The war has already claimed thousands of lives, mainly civilians caught in the crossfire, and mimics the cruel war between Eritrea and Ethiopia two decades ago that wasted over 120,000 lives. However, the real cause of the war is much deeper than a disagreement over the timing of the election.

For too long, Ethiopian political history has been dominated by the elites of two minority groups, the Amhara and the Tigray. These elites considered people of the Oromo origin and others as subjects incapable of governing Ethiopia.

The latest incarnation of such arrogance was the TPLF’s scheme that they could govern the country with the acquiescence of ethnic supporters from other regions.

The gulf between the rhetoric of democracy and the reality of ethnic domination under the TPLF was not lost to many. Ahmed and his team moved swiftly and opened a novel democratic experiment that quickly overwhelmed the TPLF and forced it to withdraw to Tigray.

The road to peace

The TPLF’s recent shelling of Asmara airport has escalated the war. Informed people think this act may be the TPLF’s final desperate attempt to attract the international community to intervene. Others believe that the Eritrean regime sees the war as an opportunity to take revenge for the TPLF’s aggression 20 years ago.

Whatever the merits of these explanations are, it is vital to contain the conflict and short-circuit a catastrophe in the making.

First, the Ethiopian government must recommit itself to a genuinely democratic order and ensure that the election reflects the people’s will. Second, the TPLF must agree to take part in the election like other regions under the supervision of the federal electoral commission. Third, all sides must silence the guns to safeguard lives as well as prepare the ground for an African-led fact-finding mission. Fourth, all must agree to the supremacy of the federal constitution and government and the need for regional self-government.

Finally, adopting such a programme will ensure the death of ethnic chauvinism and pseudo-democracy, and the rise of democratic Ethiopia at peace with itself and its neighbours. DM