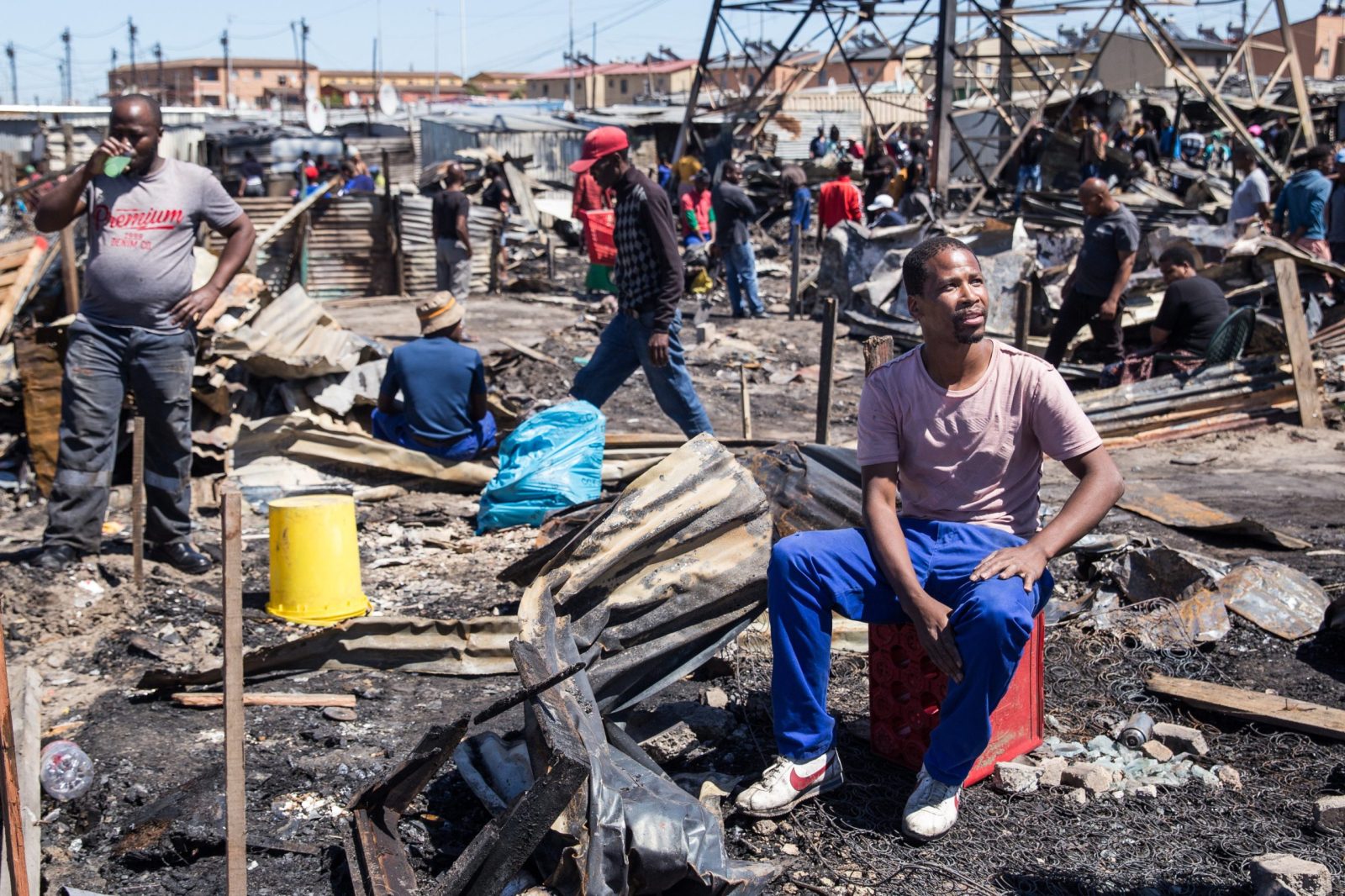 Father of three, Mawethu Nayo (seated on the red crate), was home with two of his children when a fire started in Langa on Thursday morning. He managed to save his children and some clothing. He had just taken his wife to hospital on Wednesday to have their baby. He worries about what they will be returning to. (Photo: Ashraf Hendricks)

Seventy shacks were destroyed by fire in Langa, Western Cape on Thursday morning, leaving nearly 200 people without homes. The cause of the fire is yet to be determined by authorities. Many of the affected residents lost all of their belongings in the blaze.

Seventy shacks were destroyed and 197 people left without homes when a fire ripped through an informal settlement in Langa on Thursday morning.

Jermaine Carelse of the City’s Fire and Rescue Services said they were alerted that the shacks were alight just off Stanford Dyosini Street at 1:07am. “We had 11 firefighters and 42 staff members on scene. Firefighters managed to contain and extinguish the fire at 4:23am and no injuries were reported,” said Carelse.

When GroundUp arrived at Phants’ Kombane (which means under the electricity) in Joe Slovo, Langa, residents were standing on their plots, waiting for disaster risk management officials to write down their names for assistance. The area was filled with burnt zinc sheets and part of the huge pylon overhead was also charred.

When we spoke to 26-year-old Lona Myeko, she was holding her six-month-old son Melokuhle, a box of baby formula she managed to buy at a nearby spaza shop on Thursday morning and her son’s pacifier. She explained that she had lost everything, including Melokuhle’s birth certificate, clothes, food and clinic card.

“I’ve been living here for two years and was sharing the shack with my sister. I was woken up by my neighbour banging on my shack telling me to get out because there was a fire. My shack was filled with smoke and it was so hot inside. I grabbed my baby and ran out,” she said.

Just a couple of metres from Myeko, Mawethu Nayo sat on a red beer crate. Nayo and his two children aged three and nine were sleeping when they heard people shouting outside.

Nayo said that on Wednesday night he had taken his wife to Somerset Hospital to give birth to their third child. “I am just happy that they were not here during this fire. I am just hopeful that by the time she comes home, she will have something to come home to,” he said.

According to Nayo, there were two fires in the informal settlement last year, but none of them were as bad as this one.

Though the cause of the fire has not yet been determined, resident Soyiso Mlungu believes the fire was started by an electrical fault.

“There is no electricity here, no water or toilets. We do illegal connections for electricity, so a connection from one of the shacks caused the fire and unfortunately, the owner of the shack was not there when this happened,” said Mlungu. DM