By Nompendulo Ngubane for GroundUp• 19 November 2020 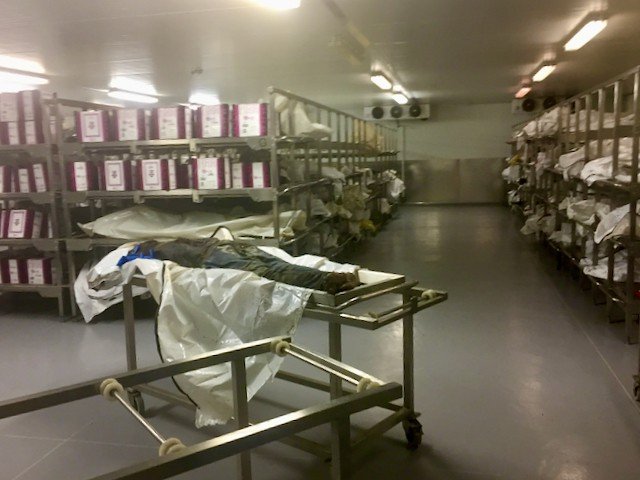 Decomposing, unidentified bodies have been piling up in two cold rooms since 2010, at Fort Napier Medico Legal Mortuary in Pietermaritzburg. (Photo: Nompendulo Ngubane)

Workers at a mortuary in Pietermaritzburg say bodies are piling up and human organs are not collected. Some unidentified bodies have been lying at Fort Napier Medico since 2010.

Workers at Fort Napier Medico Legal Mortuary in Pietermaritzburg say their appalling working conditions have only worsened since 2018, when GroundUp last reported on the facility.

Decomposing, unidentified bodies have been piling up in two cold rooms in the mortuary since 2010, they say, and are still there. The bodies continue to decompose and workers have to clean them every week because they smell.

In 2018, workers went on a go-slow, demanding better working conditions and a wage increase. Some were arrested. Workers say they were promised that their demands would be attended to and they went back to work.

When GroundUp visited we found small buckets with human organs on top of tables. According to the workers, these have been sitting there since 2019. They should have been collected and taken to Pretoria.

The employees say out of a list of their demands the department has only managed to instal new tiles in the kitchen and one air-conditioning system, which is insufficient.

“Other than that everything else is a mess,” said a worker. “The cars we use to collect bodies are not roadworthy. Some have failing breaks. You can’t lock them. We use wire instead of a padlock to ensure that the body does not move and fall on the ground while we are driving.”

“The scan we use for bodies has not been working for three months. Some of the metal trays [gurneys] are broken,” said the staff member.

Out of eight cars, only two cars are operating.

Workers say they do not have adequate personal protective equipment (PPE). Some of the workers were wearing green plastic rubbish bags as makeshift gowns. A worker said they were last supplied with a uniform in 2013.

“There are no N95 masks. Instead, we wear two surgical masks to protect ourselves. Sometimes we work on bodies that are infected with Covid-19,” said the worker.

“We have only two doctors. One is part time and the other one is permanent. The workload is too much. Sometimes we have to work on 14 bodies per day,” said the worker.

“As you can see, these four bodies, they were started in the morning around 8am,” said the worker. “It’s midday now. They are not done. There is only one doctor. The shortage of staff has been an issue that has been ignored for years.”

“The truth is most of our mortuaries are poorly managed and neglected. There are problems in many of the mortuaries in the province. Workers are ignored by the government and the ruling party. They must come and see what we go through every day. None of us deserves this. Our salaries are an insult of R10 000 without any counseling while we work under these conditions,” said the worker.

The Department of Health has not yet responded to our questions but, following our query, we have been informed that officials arrived at the mortuary on Thursday morning and, with the assistance of a funeral company, they have finally begun to remove the bodies. DM

"(O)ur honeymoon will shine our life long: it's beams will only fade over your grave or mine." ~ Charlotte Brontë