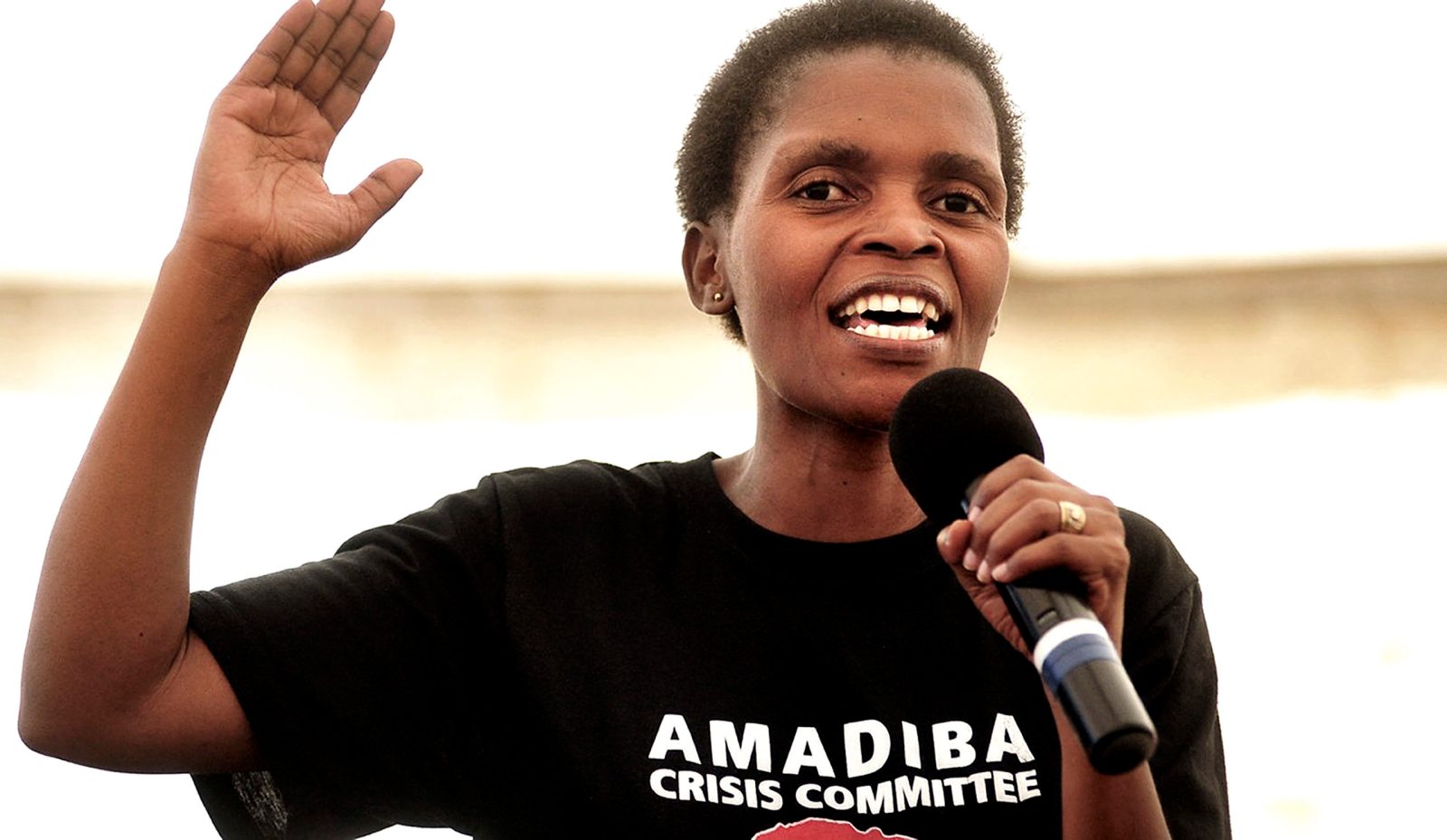 As the Amadiba Crisis Committee prepares for the funeral of its chairperson Sibusiso Mqadi, the community on the Eastern Cape Wild Coast has been rocked by death threats against another community leader. Former chairperson of the organisation Bazooka Radebe was assassinated in 2016.

On Monday morning 16 November, a member of the Amadiba Crisis Committee Nonhle Mbuthuma picked up her phone and saw a single message.

It had been delivered the previous night at 10.40.

At first, she saw only the first line: “You are next.”

“I wondered about this strange message,” she said. “When I opened it, it read: Bazooka was number one, Sbu was number 2 and you Nonhle you are number 3. We are coming for you.”

“I wasn’t scared when I saw it, but I was really, really angry. I didn’t expect it.”

“There are huge pressures on us as activists in our community. There are two big projects threatening us — the mine and the N2 project.

In 2016, outspoken anti-mining activist and chairperson of the Amadiba Crisis Committee Bazooka Radebe was gunned down outside his home.

Radebe’s successor, Sibusiso Mqadi, died in hospital on 7 November 2020 after a short illness.

Now the community believes that Mbuthuma’s life is in danger.

“Following the death of the Amadiba Crisis Committee’s chairperson Sibusiso Mqadi and following the yet to be solved assassination of our previous Chairperson, Bazooka Radebe, we are going public with the threat,” a statement issued by the crisis committee read. “We have diligently shared previous death threats to the local police as well as to Crime Intelligence. We have been giving the police extensive leads on where these threats were made, who are suspects, and who passed the information, but there has been no police action taken against suspects,” the statement reads.

Mbuthuma said unrest in their area had been fuelled by two large planned projects, one being the persistent threat of mining and the other a dispute over the placement of the N2 Wild Coast Toll Road.

“We call on the security forces to show resolve and investigate these threats and respond to the growing tension in the area,” Mbuthuma said.

“These two projects are like husband and wife. Those who are pro-mining are pro-road. As long as these projects are threatening our community there will be killings,” she said. “But we are very strong. We will not give up our land. They can take us one by one. The land is our identity and our livelihood,” she said.

Mbuthuma said the police were not doing enough to investigate the death threats.

“For Bazooka’s death there was a suspect, but never an accused. We still have questions about Sbu’s death. When I went to them with the threat they said the phone was on voice mail. I could have phoned the number myself. They said there was nothing they could do because the phone was not Rica’d. They are not invested in solving this. The state should do more to stop the use of these phones with SIM cards that cannot be traced. They are making it easier for the assassins,” she added.

The South African Regulation of Interception of Communications and Provision of Communication-Related Information Act requires cellphone and network providers to require proof of identity and address before a SIM card can be activated.

But while the community still views the mine as a threat, they are now also fighting to move the N2 Highway Toll Road away from the coast in their area as the planned route would go through Mdatya and Sigidi villages.

Mbuthuma said her community had rallied around her. “They are protecting me and looking after me. They will have to come through them to find me” she said.

She said they still had a lot of questions about the death of Mqadi, whose funeral will take place on Saturday.

“We asked for a post-mortem to be done and it said that he had a medical condition, but we still have some questions,” she said.

The spectre of anti-mining activist Fikile Ntshangase’s death still looms large in the community. Ntshangase, who was fiercely opposed to the expansion of the Somkhele coal mine in northern KwaZulu-Natal, was gunned down at her home in October 2020.

“We know these threats are not empty words,” Mbuthuma said.

“Four years after his assassination, we continue to call for justice for Bazooka. If the police would finally do their jobs and arrest his murderers, it would be a clear signal that there are consequences for killing activists. The failure to make any arrests signals that new killers will go free,” she said.

Earlier in 2020, the North-Gauteng High Court ordered that the community must be allowed access to mining rights applications of operations that may impact on them. The ruling was described as ground-breaking for all mining communities.

But while the community still views the mine as a threat, they are now also fighting to move the N2 Highway Toll Road away from the coast in their area as the planned route would go through Mdatya and Sigidi villages.

Mbuthuma said in January 2020 that a large imbizo from the whole of Amadiba met a Sanral delegation at Komkhulu, on the coast in Xolobeni.

“For the first time in memory, the councils of both the inland and the coastal section of Amadiba organised an imbizo together. This showed the gravity of the situation. After three years of conflicts with Sanral and its contractors both… inland and on the coast, the imbizo on Thursday decided in no uncertain terms that Sanral must leave Amadiba. Sanral can come back when the Amadiba has decided where the N2 shall be placed,” said Mbuthuma.

“Sanral insists to put their N2 Toll Road 2.5km-3km from the coast, dividing the Sigidi, Mdatya and Bekela villages with an 80m wide and fenced highway, something that the Australian mining company has begged for over 15 years,” Mbuthuma said. She said they want the road to be moved to a minimum of 10km from the coast.

“The highway will never be put in villages that absolutely don’t want it. And it must serve the whole of Amadiba, which it does best in the middle of our large area.”

Sanral has had a number of engagements with local communities in the area.

After a visit in October, Minister of Transport Fikile Mbalula said the project would continue to create thousands of new jobs and economic opportunities in line with the new Economic Reconstruction and Recovery Plan.

“Genuine concerns raised by local communities would be addressed by the national Department of Transport and the South African National Roads Agency SOC Limited (Sanral), but the government would not allow people with hidden agendas to stop development,” a statement by Mbalula said. DM/MC