Return of the EFF 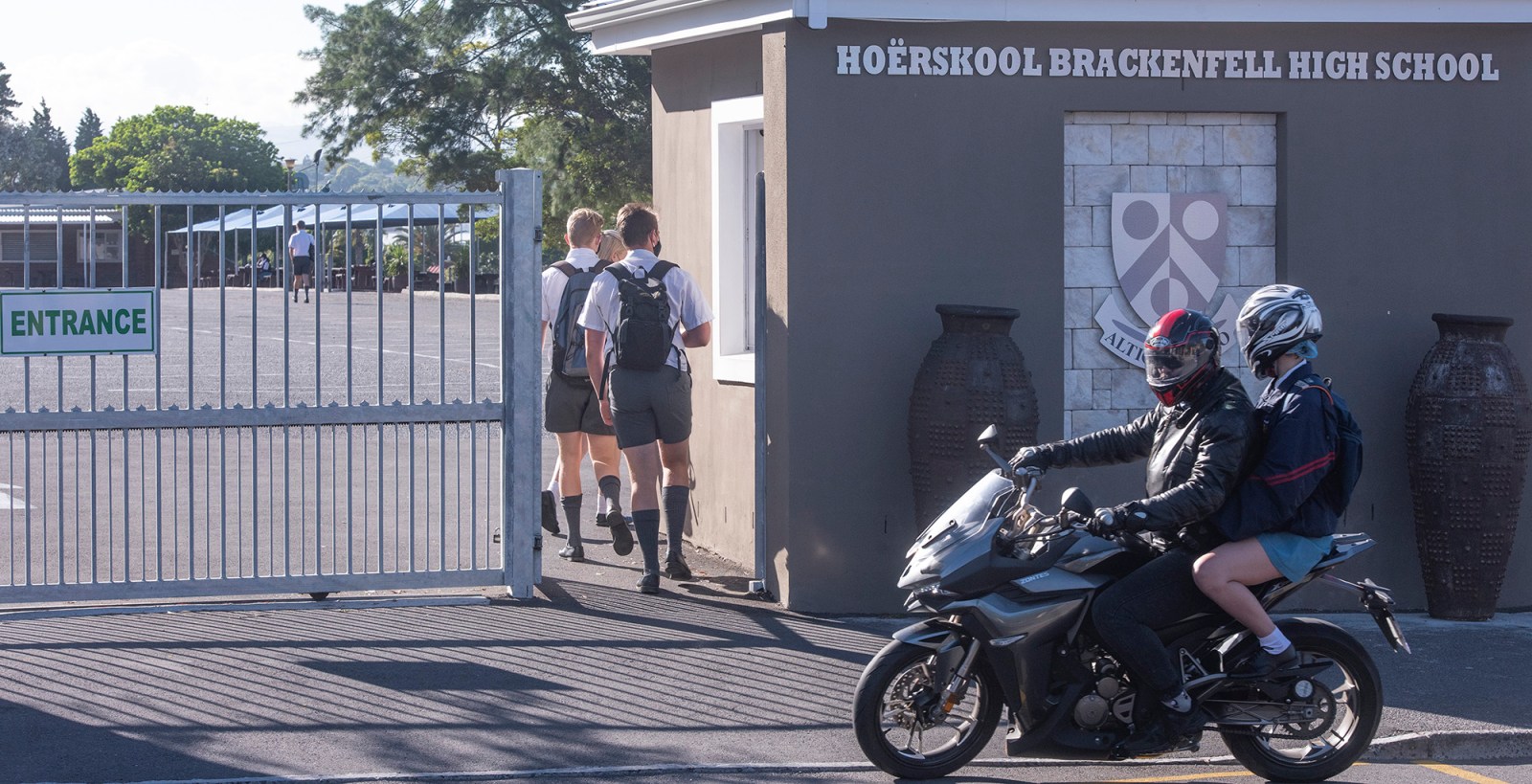 Tension in Brackenfell, Cape Town, remains high after protests over a private matric function that black students at Brackenfell High School were allegedly excluded from. On Friday 20 November, Economic Freedom Fighters members will return for another march. Residents are being urged to stay away because of potential conflicts.

“Goodbye my love,” shouts a parent who dropped off her child at school on Tuesday this week. The child waves goodbye as he walks to Brackenfell High School in Cape Town’s northern suburbs.

The school made headlines when protests erupted on Monday 9 November amid allegations that teachers attended a private matric function that 42 students — only white — attended. The event was held in place of the matric ball, which had been cancelled due to Covid-19 restrictions.

After news spread of the private event, the Economic Freedom Fighters (EFF) protested at the school on Monday 9 November. The conflict between residents and members of the EFF began when a resident grabbed the red beret of an EFF supporter. One person was arrested after firing an airgun into the crowd.

The protests took place within weeks of the Senekal, Free State, protests which had once again revealed the deep-seated racial divide in the country.

Brackenfell, Senekal and the disappearing centre of SA politics

On 17 November, one week after the protests, Daily Maverick arrived at the school to try to speak to parents, but they were reluctant. Instead, a security guard stationed at the learner’s entrance said he needed to speak to the police to find out if we were allowed to be at the school.

A resident near the school said he did not want to comment as “die EFF is kinders [the EFF are children]”. Police in two vans came to the school, waved and spoke to the security guard. After about 15 minutes, the police vans drove off.

Daniel Vieria, manager of a takeaway spot about two streets from the school, saw the protest begin.

He described his thoughts when he heard about the protests: “Here comes shit, to be honest.” He had been worried about possible looting, as stones were being thrown during the protest. But there was no looting by the EFF. Instead, six supporters were injured and bakkie displaying an image of Julius Malema had its windows shattered.

The school applied for a court interdict to stop any further protests by the EFF at the school. After two postponements, the urgent application will be heard on 2 December.

Siya Ntuntwana, a former rugby and cricket player at the school, received death threats after he spoke about his experience at the school. He told News24 he had been called the k-word and had been exposed to overt and covert racism.

The Cape Times reported that Ivan Simmers laid intimidation charges after being followed home while driving and receiving threatening messages. Simmers had been the whistle-blower who posted some of the first social media posts about the event, garnering media attention.

David Mhondoro, who has worked in the Brackenfell area for 10 years, said he had seen discrimination — such as white people being helped before black people. He heard about the event and questioned “why is there not one black person [at the private function] — there’s an element of racism”.

Mhondoro said he had a matriculant friend at the school. He supported the EFF protest and did not support the violence because it was “disturbing the matric exams”.

Issues of racism are not only linked to the school. Alrick Gordon and his friend Nicollas Kuter both relayed their experiences to Daily Maverick. Both live in the nearby Scottsville area, but are often in Brackenfell. Gordon said he had been searched by private security companies and the local neighbourhood watch.

“They say you are a coloured, what are you doing here?” said Gordon about one interaction with the neighbourhood watch. “Before Covid, they asked us where we’re going. Now it’s stricter,” he said. Gordon said it was only the neighbourhood watch and private security companies that harassed him, as the police “don’t worry about us”.

Kuter described the neighbourhood watch as “net blanke mense en baie rasisties [only white people and very racist]”. Kuter said about six weeks ago he and his girlfriend had been robbed by four people near a shopping centre. The neighbourhood watch had been called by a private company to assist. But instead of helping the couple, Kuter said members of the safety structure had been rude. “They scolded us, they questioned what we were doing,” he said.

“Suddenly, we were the problem,” Kuter said, and they were told never to set foot in the shopping centre again.

The men had not reported these incidents to anybody. “It’s not worth the trouble,” Kuter said.

With these kinds of stories, it is easy to assume there is a gap between black and white people in Brackenfell. The area falls under Ward 102 in the City of Cape Town. According to the 2011 Census breakdown, the ward is largely white and largely a better-off area — 73% of people in the ward are white, while the average income is R230,700. 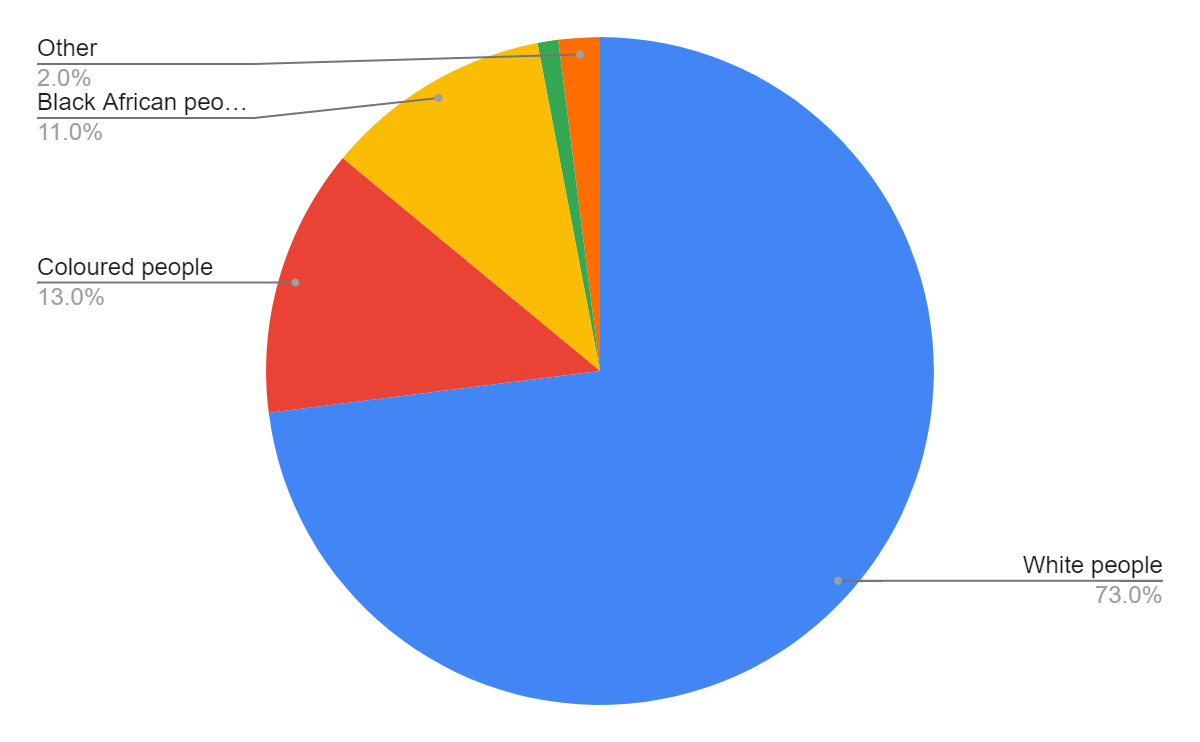 What’s next for the school and the greater Brackenfell community?

In a communiqué published on Facebook, Brackenfell High School’s principal and governing body wrote: “The SGB and staff of Brackenfell High School fully commit ourselves to participate in future discussions with learners as well as parents in order to ensure a constructive way forward… we hear the voices of our school community and as a school we commit ourselves to listen better, be better and do better.”

The school has decided to implement measures as a result of the protests:

On Monday 16 November, the EFF tweeted that it would return to the school for another protest on Friday 20 November.

The party said it would ensure “nothing operates” at the school. On Twitter, the party described the private event as a “terrorist attack”. Party leaders such as Julius Malema are expected to attend on Friday.

Daniel Vieria and his mother, Maria, who also works at the takeaway outlet, told Daily Maverick they had been told by the police about the protest. At this stage, Daniel is worried about his staff’s safety while his mother is worried about sales that could be affected on Friday.

“Fridays are our busiest days,” she said. The store was still trying to recover from its closure during the national lockdown.

On Wednesday 18 November, protesters aligned to the Pan Africanist Congress of Azania were met by police stun grenades when they tried to gain access to streets close to the school. The group were protesting in support of EFF members who had been assaulted at the 9 November protest.

Messages have purportedly been sent by the school about which state exams scheduled for Friday will be cancelled. Other arrangements were being made for matriculants to write their Physical Science Paper 1.

“This is clearly an attempt to intimidate the school and is infringing on the rights of the learners who are writing exams,” said Schäfer. “Our learners have been subjected to unprecedented events this year and anxiety and stress levels are high — this behaviour is going to add to that pressure.”

In the statement, Schäfer said the EFF is entitled to protest — “if they have a valid permit”.

However, protesters are not required to ask for permission to hold protests — activist Axolile Notywala has pointed out that the Gatherings Act only requires permission for protests within 100m of Parliament, courts or the Union Buildings. However, the Gatherings Act “simply requires protesters to give notice at least seven days before a protest”.

Schäfer said “we expect the SAPS to make arrests immediately” should the EFF not protest peacefully, remain off school grounds or not ensure Covid-19 rules are observed.

Rhynhardt Bresler, the local ward councillor, urged residents to stay away from the school on Friday unless it was to drop off their children. Bresler said the SAPS had committed to a police presence on Friday.

“A comprehensive operational plan has been settled between the SAPS, metro police, law enforcement and traffic along with the relevant Community Policing Forums and neighbourhood watches.”

Bresler said plans were in place to set up perimeters around the school — with “crowd management to protect learners, teachers and school property”. It is unclear if this means private security will be present.

“It is critical that there are no attempts at escalating conflict by any residents or groupings,” he urged. “Do not go to the vicinity unless you are a parent bringing a learner to school.”

When Daily Maverick called the principal to set up an interview, we were directed to the Western Cape Education Department for comment. DM