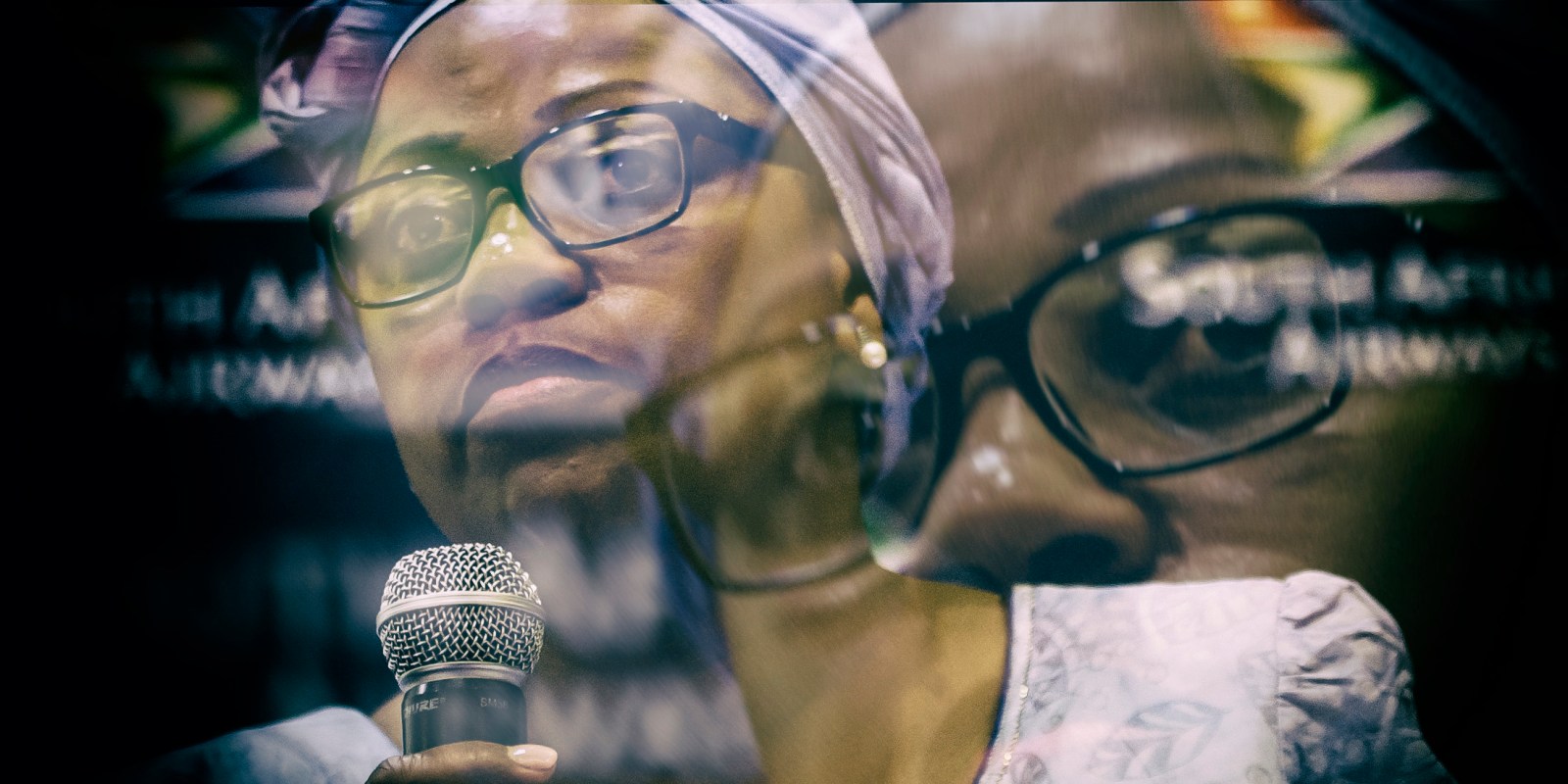 Dudu Myeni has retracted her ‘unnecessary attack’ on Judge Ronel Tomlay and looks to introduce Zondo commission evidence in an appeal bid as she tries to fight off the delinquent director declaration.

The attorney for former SAA chairperson Dudu Myeni has undertaken to retract a sentence from her court documents as they admit it was an “unnecessary attack” on the presiding judge.

The sentence in question reads: “In the circumstances, this is a classical case of judicial plagiarism.”

These two parties launched the legal action against Myeni that resulted in Judge Ronel Tolmay declaring her a delinquent director on 27 May.

Outa and the SAA Pilots’ Association (Saapa) brought the case against Myeni in 2017 on account of her destructive SAA reign.

Tolmay wrote that there were multiple grounds for Myeni’s delinquency as a director of SAA. The judge found Myeni was dishonest, grossly abused her power, grossly negligent, reckless and her action inflicted substantial harm on SAA. “She was a director gone rogue,” the judge wrote.

Tolmay ordered in her ruling that the National Prosecuting Authority review the evidence led in the case to determine if a probe for criminal conduct was necessary.

In his November letter, Mabuza said that “due to clerical oversight”, Myeni’s legal representatives failed to remove the sentence from her final set of heads of argument.

“This is very unfortunate,” he added.

The consensus of Myeni’s legal team was that the public could read the sentence as an “unnecessary attack” on Tolmay, he added.

“Such an attack would be unwarranted, more particularly in that it does not form part of the essence of the complaint.

“Although bias is imputed, we do not go as far as to impute deliberate or even actual bias, but only a reasonable perception or apprehension thereof.

“The difference between the two, though nuanced, is significant,” Mabuza said.

Myeni would remove the offending sentence from her heads of argument, he added.

In her heads of argument filed on 25 September, Myeni claimed that Tolmay was biased in her judgment handed down on 27 May, where she declared Myeni a delinquent director for life.

Tolmay allegedly copied from Outa and Saapa’s legal documents, including at least 265 of the 285 paragraphs of the judgment, Myeni added.

In response, Pandor Attorneys agreed with Mabuza that Myeni had engaged in an “unwarranted attack” on the judge.

“We expect that your counsel will issue a full apology to the court at the hearing,” Pandor Attorneys added.

In another development, on Tuesday this week Myeni filed a supplementary affidavit in the North Gauteng High Court to introduce new evidence as part of her appeal of the delinquent director ruling.

The application comes ahead of the court hearing on 19 November where Tolmay will hear Myeni’s application for leave to appeal the 27 May judgment.

At the same time, Outa and Saapa are opposing Myeni’s application.

They have applied to Tolmay to enforce the 27 May order.

If this application is successful, Myeni will have to relinquish all her remaining directorships, including her chairpersonship of the Jacob G Zuma Foundation.

Outa chief legal officer, advocate Stefanie Fick, said Myeni’s latest application was submitted at the eleventh hour and was a “colossal waste of time”. Outa would oppose this application as “it has no merit”, she added.

In her latest application, Myeni applied to Tolmay to introduce new evidence from the Judicial Commission of Inquiry into Allegations of State Capture that is chaired by Judge Raymond Zondo.

The new evidence was “extremely relevant” to the case at hand, and it was in the interests of justice that Tolmay allowed the introduction of evidence, Myeni said.

Outa’s Fick said there was no relevance in a leave to appeal application for new evidence to be submitted.

The evidence relates to the submissions of former SAA director Yakhe Kwinana.

However, Pandor Attorneys said it was “impermissible” for Myeni to introduce new evidence long after all parties had concluded the trial.

Myeni appeared before the Zondo Commission on 4 and 5 November where she declined to answer most of the questions put to her by evidence leader advocate Kate Hofmeyr because she said she wanted to avoid the possibility of incriminating herself.

Myeni said Kwinana stated before the Zondo commission that she had a meeting with Outa on 30 August 2016 after she resigned as an SAA director.

The meetings specifically concerned the decision of Outa not to join Kwinana in the legal action to declare Myeni a delinquent director, Myeni said.

Had Kwinana not met with Outa, Outa would most likely have included her as a defendant in the matter, she added.

There was no escaping the conclusion that Outa struck a deal with Kwinana, which Outa sought to hold Kwinana to by ensuring that she did not testify as a defence witness in the trial, Myeni said.

Outa concealed its deal with Kwinana from the court, she claimed.

However, Outa’s Fick denied that Outa had ever made any deals with Kwinana.

Outa submitted a complaint against Kwinana with the South African Institute of Chartered Accountants (Saica). Saica, in turn, referred the matter to the Independent Regulatory Board of Auditors.

“At no point did Outa say to Kwinana that we would not go after her,” Fick added.

“Outa recorded the meetings [with Kwinana] electronically without her knowledge and permission,” Myeni claimed, and so Outa was guilty of illegally obtaining evidence.

At the Zondo commission, Kwinana claimed she was not aware that Outa had recorded her meeting with them.

Fick denied that Outa had done anything illegal in recording their meeting with Kwinana.

“Recording someone when you are part of the conversation, according to my understanding of the law, is not a crime,” she added.

“It is undeniable that the above evidence is relevant to and will have a large bearing on some of the key issues raised in the present application for leave to appeal, and indeed, the envisaged appeal itself,” Myeni added.

One of the main thrusts of Myeni’s appeal – and a point that she also raised during the trial – is that Outa does not have the lawful right to bring the action that resulted in her being declared a delinquent director.

“The public interest can properly be represented by a party, which is guilty of a material non-disclosure to the court and potential abuse of the court process.

“Also, whether Outa selectively, in targeting me in the application for delinquency, was indeed serving the public interest in its narrow political interests,” Myeni said.

Myeni said she would like to introduce Kwinana’s testimony as she believed it supported several points raised in her leave to appeal application.

The new evidence showed Outa did not have locus standi in the matter and did not act in the public interest, Myeni said.

It could never be in the public interest to single out one person while there were other qualifying persons, she added.

The public interest would demand that all those who should be declared delinquent directors be so declared, Myeni said.

Outa was motivated by their “narrow and selfish political or other agendas”, which were undisclosed to the court, Myeni added.

“It is clearly in the interests of justice that the court should exercise its inherent jurisdiction in favour of admitting the new evidence,” Myeni said.

She said she did not present the evidence during the trial because she only became aware of Outa and Kwinana’s alleged “secret negotiations” and subsequent alleged pact on 7 November during Kwinana’s testimony at the Zondo commission. DM