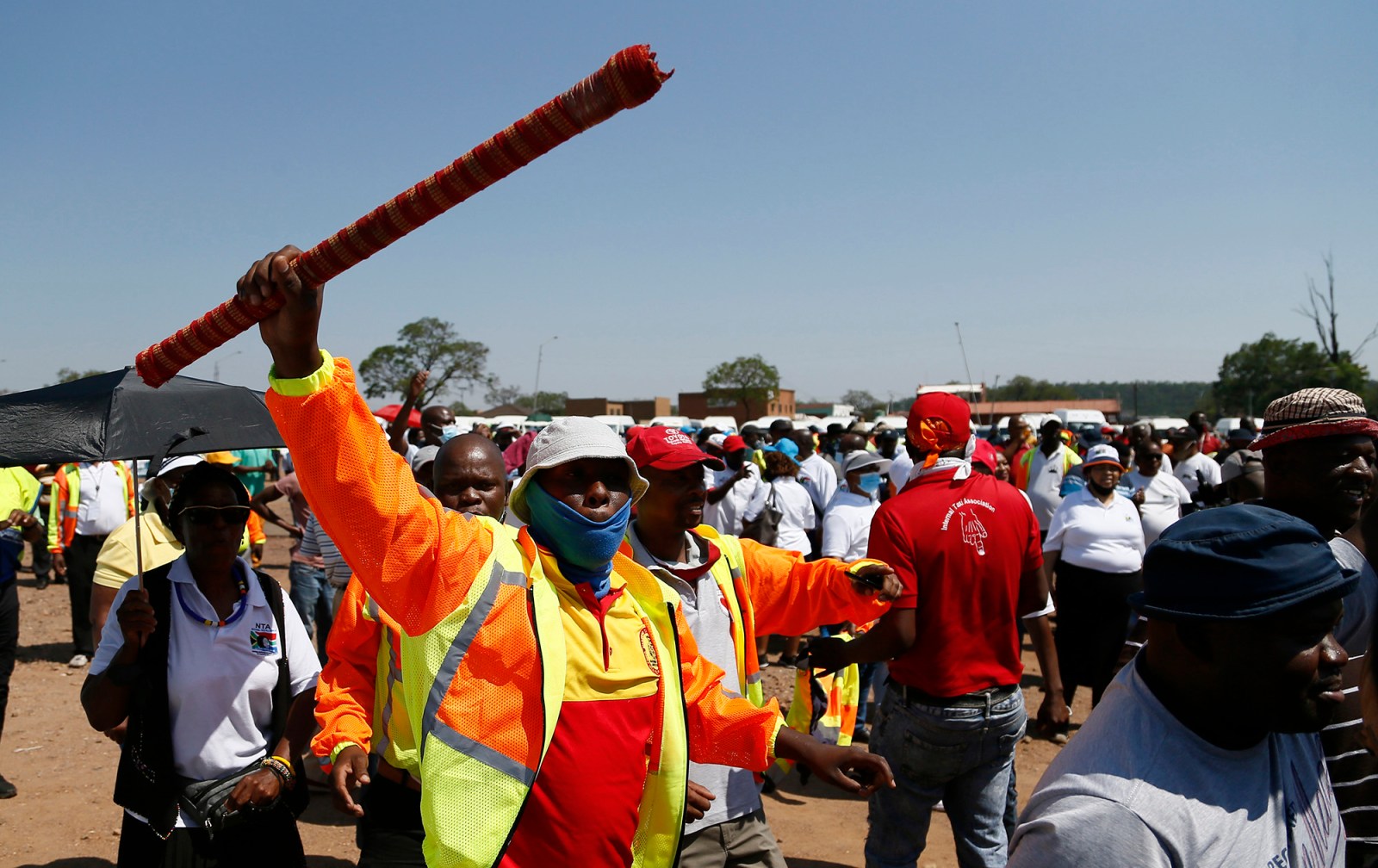 The National Taxi Alliance caused chaos on Gauteng roads on Wednesday amid allegations that it had been excluded from Transport Minister Fikile Mbalula’s big plans for the industry. In Tshwane, a bus was hijacked and commuters and matric learners writing exams were stranded, with reports of intimidation and harassment.

Many commuters were delayed or left stranded on Wednesday as members of the National Taxi Alliance (NTA) blocked a number of key arteries in Gauteng and disrupted rival taxi and bus services as they converged on the Pretoria CBD to protest against perceived threats to their right of association.

Commuters shared videos on social media of traffic gridlocks in various parts of Johannesburg and Tshwane. Protesters were also shown stopping buses and taxis and forcing commuters to exit the vehicles.

The Tshwane Bus Services suspended all operations on Wednesday morning after one of its buses was hijacked with the driver on board. According to News24, the bus was later located and the driver was unharmed.

Tshwane Mayor Randall Williams said the city had scheduled buses to operate in the early morning, with NTA’s protest due to begin at 10am.

“Unfortunately, now the residents of Tshwane have to face the brunt of their actions with roads being blocked,” said Williams.

“I would have expected that the metro police would have been prepared because they were pre-warned of this. I was quite surprised myself this morning that it seems they were not prepared,” he said, adding that he would quiz the Tshwane metro police chief on his plan ahead of the protest.

Learners writing matric exams were also delayed. In response, the Gauteng education department said learners could arrive up to an hour late for their exams and could write at another school if it was closer to home.

“The protesters went on a rampage by blocking roads illegally and leaving many workers stranded as they could not go to their respective areas of work,” said Gauteng Traffic Police spokesperson Sello Maremane.

“The strike has a negative impact on our economy since Gauteng is the economic hub of our country. Taxi operators have avenues they can explore to raise their concerns instead of resorting to intimidation and blockage of roads.”

According to media reports, protesters allegedly set a Blue Ribbon truck alight during their march in the Pretoria CBD and attempted to loot a truck transporting liquor.

NTA spokesperson Theo Malele condemned the reported acts of violence and intimidation and called on police to act on perpetrators.

“These incidents have strongly been abhorred,” he said.

Malele said the key reason the NTA was protesting was to protect its right of association. The NTA claims it has been sidelined by Transport Minister Fikile Mbalula during his discussions with the industry on providing state subsidies and during talks about providing Covid-19 relief.

The NTA withdrew from Mbalula’s taxi lekgotla, held at the end of October 2020, claiming the process sought “to deliver the taxi industry to the highest bidder”.

“The NTA also raised serious concerns about the predetermined outcomes of the lekgotla which seek to entrench Santaco as the apex leadership of the taxi industry and the dangerous intention to grant Santaco statutory powers symptomatic of referee and player scenario,” said Malele in October.

Associations affiliated to the NTA and Santaco have long been rivals. The lekgotla recognised Santaco as the industry’s leading representative. The NTA claims the state’s attempts to formalise the industry by offering subsidies favours Santaco affiliates over its members.

Mbalula’s efforts to formalise the taxi industry follows multiple failed government interventions, particularly the Taxi Recapitalisation Programme, but if it is successfully implemented it could have huge repercussions on the structure of the industry.

Santaco president Phillip Taaibosch said the NTA signed up to support Santaco as the industry’s lead body during its formation in 2001. “Hence, then we continue to regard them as a splinter group.”

While he was reluctant to comment on the NTA’s protest, Taaibosch cited the history of how Santaco was elected to lead the industry and the requirements for Santaco membership – registration with the taxi registrar, registration with a taxi association, a taxi operating licence and a vehicle registered in an owner’s name.

The NTA is seen as less formalised than Santaco and Mbalula’s efforts to restructure the industry might be likely to favour its rival.

The NTA also wants the state to disburse funds to the taxi industry from the R1.14-billion Covid-19 relief fund it proposed months ago.

Malele called it a “sheer pittance compared to the amount of money we’ve lost”. He claimed Santaco had asked to distribute the funds itself. Taaibosch said it had pushed the state to pay the funds directly to qualifying taxi operators.

No funds have yet been paid out. Taaibosch said he expects an update from the minister in the next two weeks.

“How am I going to pay for the taxi when I’m not working at full capacity?” asked Orie Mahlangu, a taxi driver who had travelled from Mpumalanga to attend the protest on Wednesday.

On Wednesday, 18 November, drivers complained that they had followed the recommended health precautions, such as ensuring that passengers wear masks, sanitising the vehicle and partially opening windows, while the state had failed to provide relief for lost income.

“The problem is the bank is taking our taxis,” said Bronkhorstspruit driver Donald Msiza.

“They promised they are going to pay our debt for that period of lockdown… We did what they asked us to do now they must do what they promised to do.” DM