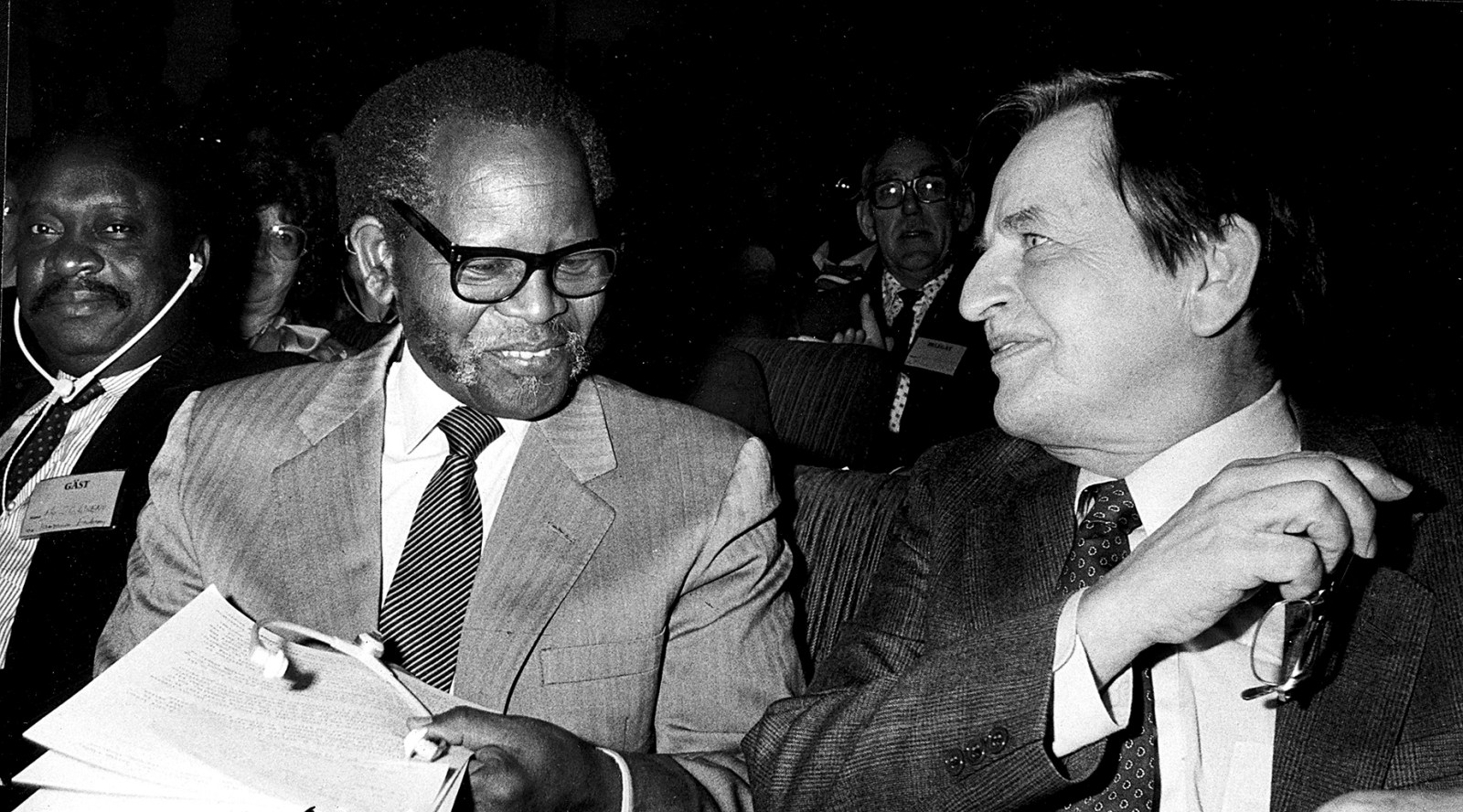 A week before his assassination, Swedish Prime Minister Olaf Palme and ANC president-in-exile Oliver Tambo both made remarks at the Swedish People's Parliament against apartheid in Stockholm in 1986. (Photo: Peter Berggren)

Liliesleaf Site of Memory and Consciousness exhibitions put the spotlight on the story of how international solidarity gave birth to the transnational anti-apartheid movement, which was pivotal in the South African liberation struggle. The networks, organisations and forms of collective action created still have an impact on national and transnational political cultures.

ANC strategy during the 1970s and 1980s, with its leadership mostly in prison or in exile, was defined by what was called the “Four Pillars” of struggle: mass mobilisation, the armed struggle, underground organisation and international solidarity work. It is widely acknowledged that the support of the international community – the fourth pillar of struggle – was a critical success factor in the ANC victory in 1994.

The Liliesleaf Site of Memory and Consciousness houses exhibitions relating to the South African liberation struggle. In recent years, Liliesleaf has developed a focus on international solidarity. It started in 2015 with a conversation between Nic Wolpe, Liliesleaf CEO, and then Swedish ambassador Anders Hagelberg on Sweden’s solidarity with the liberation movement – a story that was not very well known (and still isn’t). Today Liliesleaf has exhibitions on the roles of Sweden, Norway, the then German Democratic Republic (GDR) and the European Union.

Incredible stories emerged in the development of these solidarity exhibitions. There was the Norwegian priest who came into South Africa at the height of apartheid with thousands of dollars strapped to his waist for projects aiding the resistance and humanitarian relief. There were the young Danish activists who illegally occupied the South African embassy in Copenhagen and spent time in jail for their efforts.

There were the choirs across Sweden singing South African freedom songs and raising awareness of the horrors of apartheid. There was Olof Palme, Swedish prime minister and one of the liberation movement’s most committed allies, who once said: “The fundamental moral values of democratic socialism … make it our obligation to stand on the side of the oppressed against the oppressors, on the side of the poor and the distressed against their exploiters.”

After Palme’s assassination in 1986, the Delmas Treason Trialists sent a condolence note: “Under Palme’s leadership, Sweden made an invaluable contribution to the struggles of the oppressed peoples of the world. Not only did his government repeatedly and unequivocally express its abhorrence of the racist policies of the present government of South Africa, but it selflessly gave to our people moral and material support.”

There was the training centre at Teterow in the GDR (the official name of then East Germany), where, every year for about a decade in the 1970s to the 1980s, about eighty uMkhonto we Sizwe (MK) soldiers received high-quality military training and were cared for by East German personnel. For these MK cadres, many of whom had endured very difficult conditions in exile, having three plentiful meals a day – and beer! – was an amazing experience.

In the words of MK cadre Mikki Xayiya: “For me, it looked like a good society to live in. I am talking about a South African who came from Mdantsane, encountering a different experience, where white people treat you with dignity and respect, who call you comrade, not boy or girl, who are considerate to your needs. For a South African coming from a deprived background going to the GDR was an experience of the sort of society you would want to live in and fight to create in your own country.”

Capture the story of international solidarity

The research has delivered many more stories – too many to recount here. Some of them are contained in the exhibitions at Liliesleaf, but all remain safe in the Liliesleaf archive.

The Liliesleaf dream is to capture the story of international solidarity in a much more comprehensive way, and showcase the support given, not only to the ANC, but to other African liberation movements by the then Soviet Union. The incredible role of Cuba and its people – possibly one of the most committed and active partners to the liberation movements of Southern Africa. The anti-apartheid movements that emerged all around the world, from Ireland to Jamaica to New Zealand. The American students who campaigned for their universities to withdraw their South African investments. The International Defence and Aid Fund (IDAF) – clandestinely funding political trials and supporting the families of political prisoners. The London Recruits, young Brits who smuggled letter bombs – anti-apartheid propaganda leaflets – into South Africa in false-bottomed suitcases. The global call for sanctions. The EU Special Programme for the Victims of Apartheid. The key role of the UN Special Committee Against Apartheid and the commitment of the indefatigable Indian-born diplomat at the United Nations Enuga Reddy. The Mandela concerts at Wembley in 1988 and 1990, organised by the British Anti-Apartheid Movement and broadcast to hundreds of millions of people in 68 countries.

And there is much more.

ANC stalwart James Ngculu, in an interview with Liliesleaf, ruminated about the solidarity shown to the movement: “The support we received raised morale because sometimes you sit in the camps and all that happens is that the sun rises and the sun sets. The books, the games, the clothing and everything we received from the solidarity movement sustained most of us. And the radios – you could listen to the news and music. A small thing but so important. And the military training and hardware we received from the east assisted to ensure that we execute our underground activities.

“And the accommodation and support received from Africa. As Agostinho Neto said, Angola was the firm trench of the revolution of the South African struggle. Tanzania and Uganda, and Lusaka of course being the home of our liberation. Botswana, Swaziland, Lesotho were in the belly of South Africa and yet the number of people trained and operating in those areas was huge.

“That’s why sometimes I have this feeling that there is little appreciation, little understanding and little knowledge about what happened for South Africa to be free.”

The Frontline States – Namibia, Botswana, Zimbabwe, Mozambique, Swaziland and Lesotho – as well as Angola, Zambia and Tanzania, played a vital role. After the 1976 Soweto uprisings, thousands of young South Africans left the country and flooded neighbouring states. These countries housed exiled South Africans and provided sites for military training, despite the fact that it made them extremely vulnerable to the military might – and vengeance – of the apartheid regime. (How ironic, then, is the xenophobia and hostility that many South Africans today show towards people from African countries fleeing dire situations in their home countries? Are those circumstances perhaps even a legacy of the destabilisation of these countries by apartheid South Africa?)

Zambia became the headquarters of the ANC and other African liberation movements. The ANC’s underground radio station, Radio Freedom, was also broadcast from Zambia.

In Tanzania the ANC set up MK training camps and established transit routes to Eastern Europe and Russia. Solomon Mahlangu Freedom College (SOMAFCO), a school for children of South African exiles, was opened in Mazimbu, Tanzania in 1978. SOMAFCO was a powerful example of international solidarity at work: Tanzanians, Dutch, East Germans, Swedes, Norwegians and South Africans working together to provide education for children in exile.

Both Zambian president Kenneth Kaunda and Tanzanian president Julius Nyerere were instrumental in the solidarity effort. Oliver Tambo made friends for the ANC around the world, established it as a legitimate liberation organisation, and laid the foundations for significant diplomatic relations in post-apartheid South Africa.

All these stories speak to an extraordinary phenomenon: a global movement that united and mobilised millions of people to stand up and speak out against institutionalised racism and the wickedness of the apartheid regime.

In his book Anti-Apartheid and the Emergence of a Global Civil Society, Swede Hakan Thörn argues that “given the number of people that supported the transnational anti-apartheid movement, as well as its geographical dispersion and its achievements, there is no doubt that it was one of the most influential social movements during the post-war era. For over four decades, its impact was not limited to the South African context, as it created transnational networks, organisations and forms of collective action that made – and still make – an impact on national as well as transnational political cultures.”

Thorn poses the question: To what extent was the transnational network of southern African liberation movements and solidarity movements a predecessor of contemporary global social movements, such as the global justice movement?

Never before has it been so important to understand the dynamics between individual countries and the global village. Many of the challenges facing us are not contained within the borders of countries. Climate change, economic inequality, migration and epidemics all require the cooperation of individuals, communities, governments and corporations within and across many nations to reach a common understanding of these issues, and find workable solutions. Yet the “global justice movement” has not had the impact, nor does it have the cohesion, of the global anti-apartheid movement, despite the fact that our world is in serious trouble.

International solidarity is not just about governments collaborating, but about individuals and communities finding solidarity with each other around the world. How do we rekindle the unity of purpose that the global anti-apartheid movement demonstrated? How do we once more embed solidarity into the fabric of our society to stand together to make this world a better place for all?

“The values of human solidarity that once drove our quest for a humane society seem to have been replaced, or are being threatened, by a crass materialism and pursuit of social goals of instant gratification. One of the challenges of our time … is to re-instil in the consciousness of our people that sense of human solidarity, of being in the world for one another and because of and through others.” (Nelson Mandela, 2004) DM/MC

This is the second in a series of articles about ‘Preserving Memory and Meaning’ that aim to draw attention to preserving sites of memory and heritage, in this case Liliesleaf Farm. The first is here. Bea Roberts does research and narrative development for the Liliesleaf Legacy Programme. She is part of Totem Media, which develops and delivers all Liliesleaf exhibitions.

This article is dedicated to the memory of Enuga Sreenivasulu Reddy, also known as ES Reddy (1 July 1924 – 1 November 2020), who supported the South African liberation movement for more than half a century. He led the anti-apartheid and solidarity efforts at the UN’s Special Committee against Apartheid and its Centre against Apartheid, and played a central role in promoting international sanctions against South Africa.