The Masters: Johnson showed Augusta respect and was rewarded with the green jacket 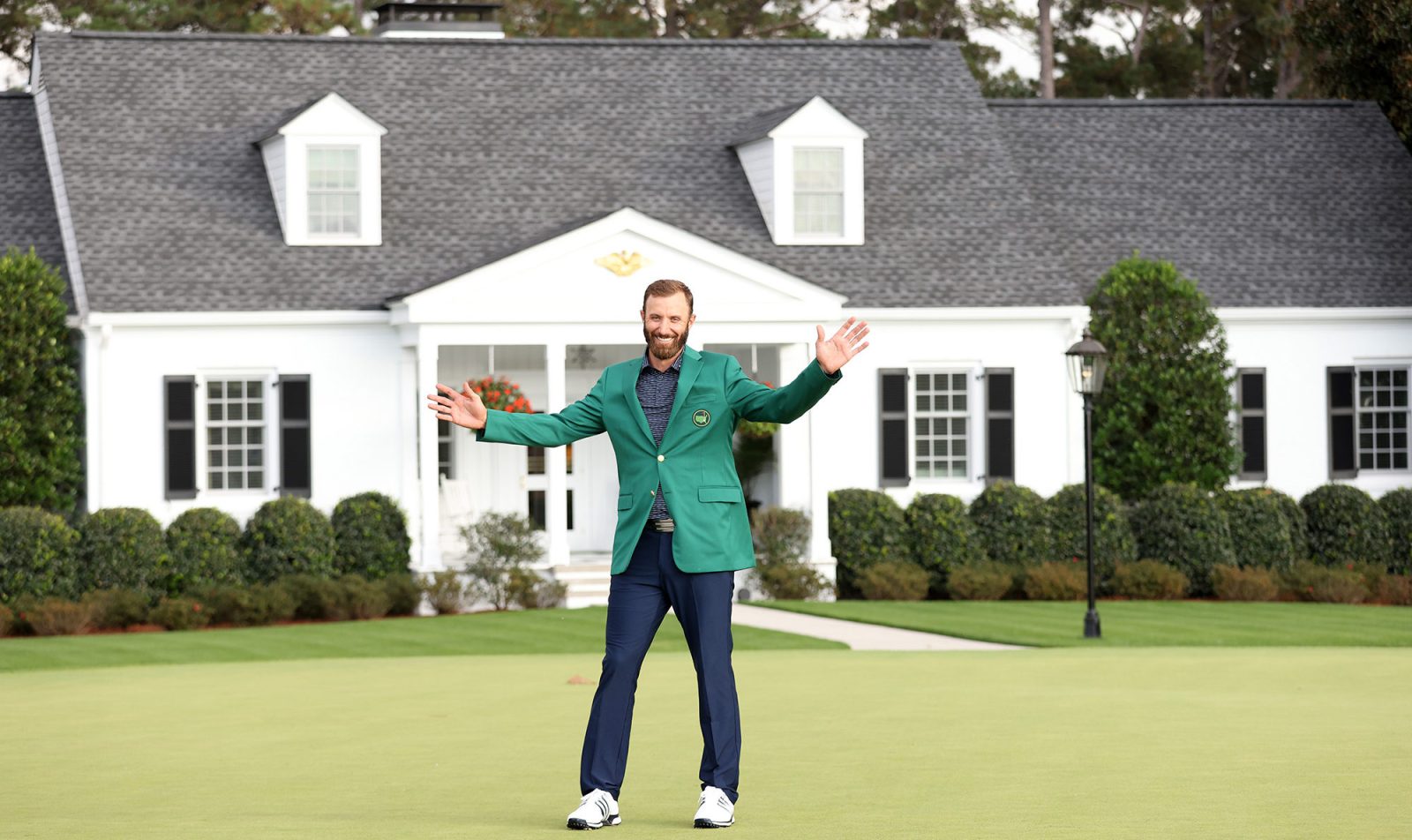 Dustin Johnson of the United States reacts during the Green Jacket Ceremony after winning the Masters at Augusta National Golf Club on November 15, 2020 in Augusta, Georgia. (Photo by Jamie Squire/Getty Images)

Dustin Johnson’s emphatic Masters victory, where he tamed Augusta National, was confirmation of his talent and work ethic, but the old course still bared its teeth and humbled some of the best.

Bryson DeChambeau, the brash 2020 US Open champion and divisive figure on tour because his slow rate of play and outspoken views before the tournament started, claimed that he saw 67 as a par score at Augusta.

The course is a par 72, meaning, in Bryson’s singular world, he needed to play every round of the 2020 Masters in five-under to be even par. It seems his main reason behind that assertion was that he could overpower a course that admittedly, does favour long hitters – and DeChambeau is the longest.

“I’m looking at it as a par 67 for me because I can reach all the par-fives in two, no problem,” DeChambeau said after his practice round last Wednesday. “If the conditions stay the way they are, that’s what I feel like par is for me.”

Johnson won by five strokes from Australia’s Cameron Smith, who himself made a small piece of history by being the first player to ever card four rounds in the 60s at the Masters. In almost any other year, Smith’s 15-under total would have been enough to win the famous green jacket.

Unfortunately, he ran into Johnson, who played the course in a way that DeChambeau theorised about, but couldn’t actually do. DeChambeau finished on two-under, 18 shots adrift. Or put another way, he was 18-over par by his own measure.

Sometimes maybe it’s best not to publicly say everything that comes into your head, especially on the eve of a tournament that has humbled so many players before.

More chastening for the strapping DeChambeau, who hits average drives of 320m, was that he finished one shot behind 63-year-old former winner Bernhard Langer. The German veteran was only averaging 247m off the tee, yet managed to work the ball around the course through patience and experience. DeChambeau didn’t have much of the former and he’s still gaining the latter.

One of the greatest at Augusta and owner of five green jackets, Tiger Woods, has never been so brash about overpowering the course, even though he has done it a few times. In 1997, he won the Masters by 12 shots and posted a record 18-under score, which was matched by Jordan Spieth in 2015 and finally beaten by Johnson this past weekend.

Woods’ record at the Masters is stellar, but he’s never been heard to utter that par is 67. And on Sunday Woods, perhaps the greatest player ever, was brought to his knees by a hole that measures a little over 140m long.

The par-three 12th hole, the last of Augusta’s famed “Amen Corner”, has literally sunk many Masters dreams. In 2019, when leading, Francesco Molinari put his ball into Rae’s Creek, which runs across the front of the green. His title challenge collapsed as Woods, playing alongside him, soon swept into the lead and never looked back on his way to a fifth title.

Molinari, who won the 2018 Open Championship, which was in the middle of a brilliant period of form, has not been the same player since what happened on Augusta’s second nine in 2019.

Woods though, has not been the greatest golfer of all time because he lacks a strong mentality. This past Sunday Woods was at three-under for the tournament when he stepped on to the 12th green. He was out of contention for the title but still had a chance of a top 10 finish.

But he hit his tee shot into Rae’s Creek. Then his third landed in the water again. His fifth ended in the back bunker, his sixth was hacked back over the green and into the water again. His eighth finally made the putting surface and he eventually holed out for a 10 – seven-0ver on the hole. He went from three-under for the tournament to four-over in one hole.

It was Woods’ worst ever score on a single hole in his 23-year professional career. Woods’ character though, is to fight back. He was no doubt furious and embarrassed by what happened, but instead of wilting and limping through the final six holes, he showed the mentality that took him to the top of the game and kept him there. He immediately birdied the 13th and added four more birdies in the final five holes to finish at one-under.

In contrasting ways, Augusta humbled two great players and sent a reminder that for all the advances in technology, the subtle nuances of the course, coupled with any player who has a lapse in concentration, succumbs to pressure or is arrogant, can come to grief.

Johnson was the picture of humility and focus. He drove magnificently, especially using his controlled fade, but he never tried to overpower the course, even though he has the ability to do so.

On Sunday he laid up at both the par-five 13th and 15th holes. He could have gone for them in two after good drives. But he recognised that he was well clear of the field and also respected the course. He eliminated all risk on those two holes, which do offer birdie and eagle chances, but also double-bogey or worse catastrophes. Johnson gave Augusta the respect it deserved and was rewarded with birdies on both. That slammed the door on the chasing pack and gave him a five-shot cushion with three to play.

Johnson admitted to being “nervous all day”. It was refreshing that a man who was setting new records, still had the EQ to feel the pressure, but the ability to harness it positively.

The talented DeChambeau could take a lesson out of Johnson’s approach. But it’s unlikely. DM