Covid-19, Trump and winter: the short-term outlook for the US is bleak 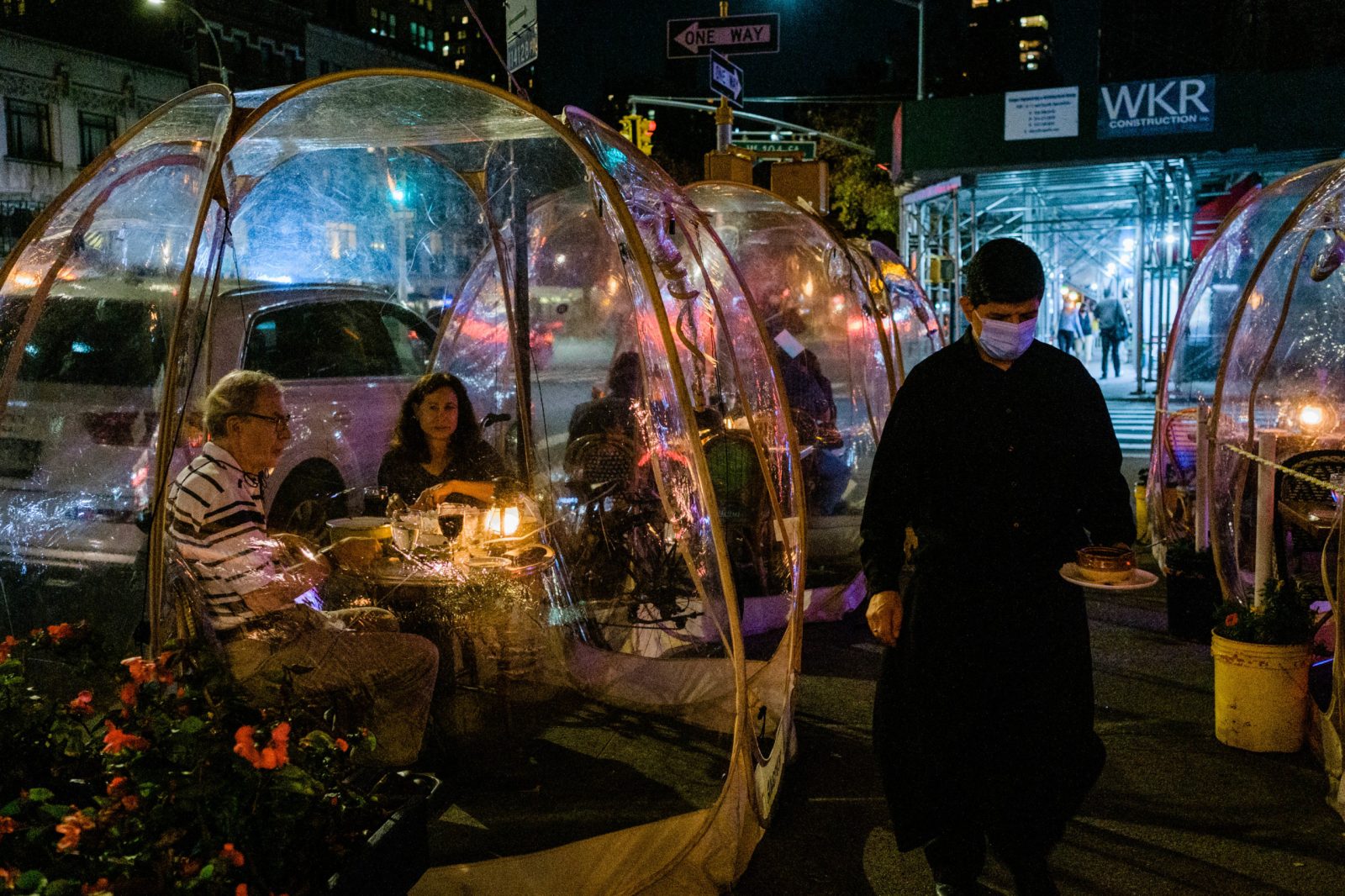 The US hits peak Covid-19 numbers as temperatures plummet and Donald Trump supporters stand by their man. As the Thanksgiving holiday approaches on Thursday 26 November, Americans are being asked not to travel and to avoid crowded indoor spaces.

Winter has arrived in the US, and as it settles in and days grow shorter and colder, Covid-19 appears to be growing. On Sunday 15 November, the governor of Washington State announced that as of Monday 16 November, there would be no more indoor dining in that state and retail stores would only be able to operate at 25% customer capacity. Gyms will be closed.

This follows more than a week of daily increases of 100,000 positive cases across the country, with the US hitting 11 million cases and closing in on 240,000 deaths at the weekend. In the state of Illinois, where restaurant owners are already fighting to stay open since Governor JB Pritzker on 4 November banned indoor dining, the mayor of Chicago has also announced a stay-at-home order starting on Monday.

The surging numbers saw positive cases in the US growing by a million in just under a week. Physician Leana Wen told CNN that the US was experiencing “a firestorm of coronavirus”. The emergency medicine practitioner said “the entire country is a hotspot of coronavirus infection”. Around the start of November, when daily numbers started increasing and then as of a week ago, when those daily numbers started hitting 100,000 and staying there, experts started calling the new surge the third wave of the pandemic in the US.

About 45 out of 50 states have seen infections surge over the past few weeks. The resultant calls for closures in a number of states have vividly brought back the spectre of job losses. Some 22 million jobs were lost to the pandemic, with a record number of jobs shed in March and April.

As states slowly opened and the summer season came around, reports show that only 44% of those jobs had returned. Most of the jobs that returned were in the restaurant industry – now again under threat as restaurants in various states are slowly having to close again.

In Manhattan, restaurants are also keeping a keen eye on Covid-19 as an increase in positive cases threatens closure of the 25% indoor dining capacity, which was allowed in New York as of 30 September.

Daily Maverick visited Harvest Kitchen on Columbus Avenue on Saturday 3 October, a few days after the start of indoor dining in the city. A charming venue with friendly staff and an interesting menu offering a tasty range of dishes, like Kimchi Fried Rice, Fresh Berry French Toast, Tuna Steak and a variety of burgers, they had just opened their indoor dining section.

Manager Fahd Bakkali said he had been managing restaurants in New York for around 12 years and had started at Harvest Kitchen a few months back. Bakkali was optimistic, but cautious, saying he was happy the restaurant was open but that it was not clear if the limited indoor seating would be much help.

“We are hoping, because it’s very hard to tell what’s going on… even with the indoor seating. Right now we can easily seat 152 people – we only have 37 people. So we lost about three-quarters of our business.”

Bakkali said they did not do too badly with outdoor dining during the summer vacation weeks:

“Summer was okay… I mean, people were still worried, especially in the beginning. June, July, people were worried but come August people got used to it [social distancing and mask-wearing at restaurants] and so more people were coming out, though still nothing like we used to have.”

New York is getting nervous as numbers edge up in the state, which reported 30 deaths on Saturday November 14. Governor Andrew Cuomo in his Covid-19 update on Sunday urged New Yorkers: “We all have Covid fatigue, but we simply don’t have the luxury of letting our guard down – Covid isn’t tired.” New York City Mayor Bill de Blasio also said that schools would remain open while positive cases remain below 3%.

In all of this US President Donald Trump has been largely silent, speaking mostly on Twitter and concentrating on the election results and his continued belief and contention that the election was rigged. He/his campaign also continues to bombard Americans with emails – some six emails on Saturday – around the election results, including asking for money for his legal defence fund. 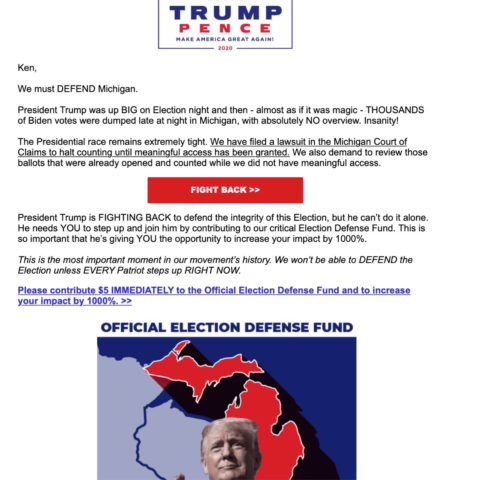 Trump remains on message, pushing the line that he had been spouting since election numbers started to go in favour of his competitor. “If you count the legal votes, I easily win,” he said on Thursday 5 November as counting continued from Tuesday 3 – voting day – and it became clear the presidency was slipping away from him.

Meanwhile, President-Elect Joe Biden has throughout his campaign had the pandemic at the forefront of his message to his countrymen and announced his Covid-19 task force on 9 November, two days after the election result was called in his favour.

While the pandemic rages through the US, Trump is still focused on contesting the election results in the courts, urging his legal team to continue fighting even as some nine court cases were kicked out of court or dropped by his legal team on Friday. Trump was feeling the full effect of Friday the 13th as he lost cases in Michigan, Pennsylvania and more – in one day.

Trump’s court cases were doing as well on Friday 13 as the Million Maga (Make America Great Again) March was on Saturday 14 – authorities on the ground in Washington DC say Trump supporters numbered closer to 10,000 than one million. The supporters, including members of the Proud Boys, mostly maskless and chanting “four more years” were excited to catch a glimpse of their hero when the president’s motorcade passed them.

Later, violence erupted when counter-protesters arrived and confronted the marchers, leading to fistfights and at least one stabbing. Twenty arrests were reported and two policemen were injured. A man was also arrested after fireworks were set off at a restaurant close to the White House where an argument broke out between Trump supporters and counter-protesters. Political pundits and social commentators in the US have voiced concern that the US is facing an ever-deepening divide, furthered by Trump’s insistence that the election was stolen from him.

Besides taking the time to wave to supporters on his way to playing golf on Sunday, Trump has not commented on the Maga march, except on Twitter. The president has also yet to comment on the fast growing pandemic.

The virus surged in the US as winter arrived and indoor dining got started, so it is perhaps not surprising that the numbers are going up as the cold weather bites. Many hospitals in the US are concerned that they are now fighting coronavirus and the flu. The COVID Tracking Project reports that on Sunday 15 November 69,864 people in the US were in hospital because of Covid-19, but that “Texas has not reported its data yet today”. DM