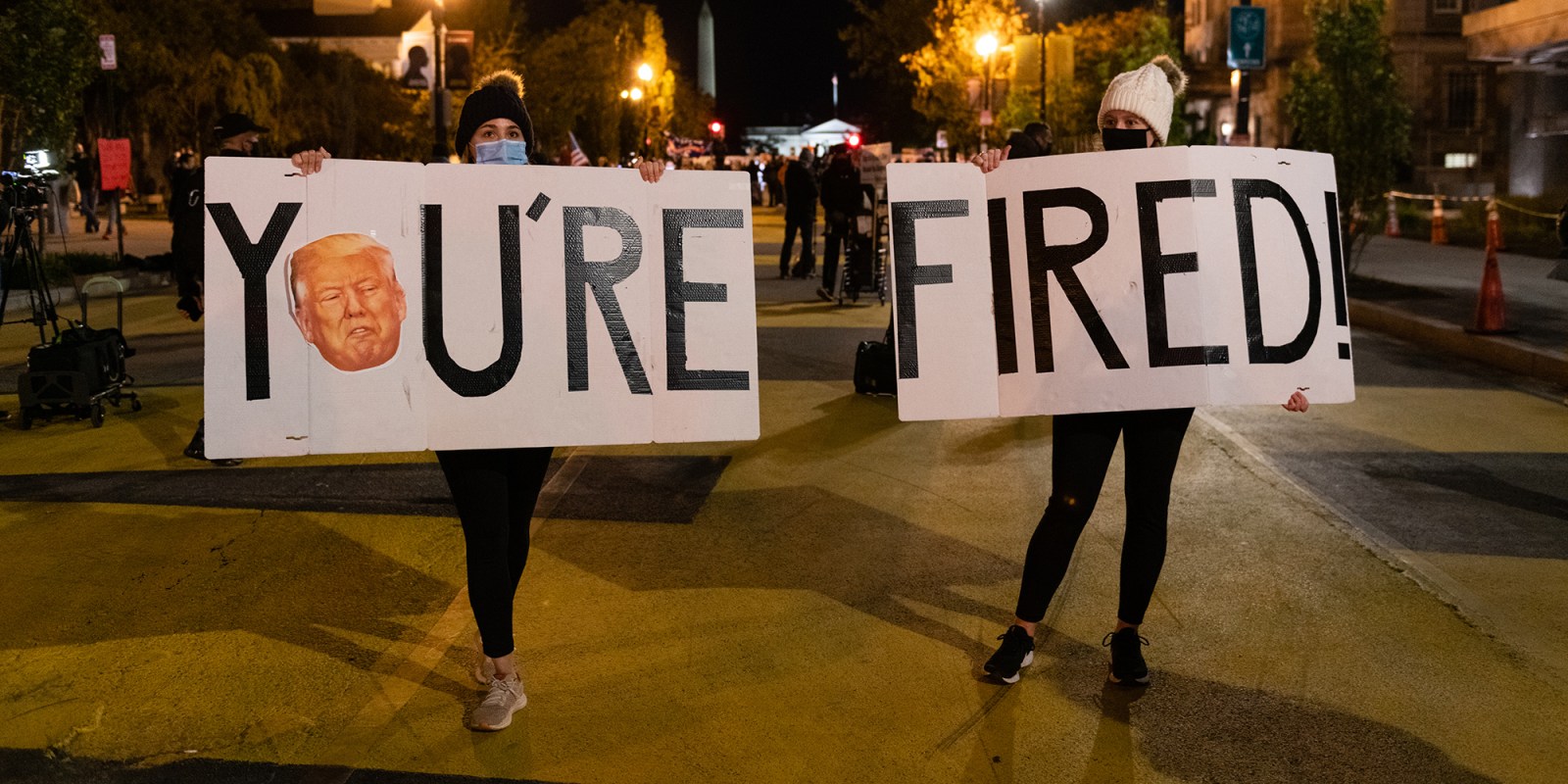 Demonstrators hold a 'You're Fired' sign in Black Lives Matter Plaza during the 2020 presidential election in Washington, DC, US, on Wednesday November 4 2020. (Photo: Eric Lee/Bloomberg via Getty Images)

As ironic as it may seem, US President Donald Trump’s smaller-than-expected loss in the election is a demonstration not of his surprising durability, but of our frailty as humankind. While that might astound some Americans, in Africa, I suspect, few will be seriously shocked.

One of the funniest and poignant portrayals of soon-to-be former US president Donald Trump came, somewhat inevitably, from comedian Trevor Noah. Noah made the point in jest, but there are often few truths that hit home harder than when they are spoken with a smile.

Way back even before Trump was elected, Noah said Trump was precisely the stereotypical African “big man” president.

He played clips side by side of Trump and Jacob Zuma saying not all foreigners are drug dealers and crooks; of Trump trashing vaccines and former Gambian president Yahya Jammeh saying he could cure Aids with herbs and bananas; of Trump saying he was rich and brilliant alongside Idi Amin saying almost the same thing; of Trump and former Zimbabwean president Robert Mugabe saying people loved him.

Later, in an interview, Noah expanded on this notion, saying, like with African dictators, you just have to “follow the money”, particularly with the people closest to him, his family and business associates.

And Trump has ended his presidency in a stereotypical African way too, claiming the polls were rigged and refusing to leave. The irony is that while some African presidents still have some of these “big man” characteristics, the continent is changing. It’s rarer now, although by no means eradicated. But just as African presidents are beginning to discover their inner Lincoln, Americans are reaching for their inner Mugabe.

And, by the way, so are many other countries around the world: China, Russia, Hungary, Brazil and Turkey have some Trumpesque qualities.

Rodrik finds the reasons for this conundrum in economics and culture.

“A lot of bridge-building needs to be done to overcome the fissures for which cultural elites are largely responsible,” he writes.

Yes, but it goes further than that. The snobbishness of cultural elites is often hauled out as a reason for this social shift, and the argument has some truth to it, but to me it is not persuasive. It places too much blame on these so-called elites, who often consist of the most caring and thoughtful people in society. To characterise their revulsion for “big man” politics as “snobbery” is frankly a travesty.

I think the allure of “big men”, either of the African or the American genus, lies in the character and nature of human devotion. It’s often said that Trump’s statements are “outrageous” as though they ought to be repellent – and often they are.

But for those who in their hearts surreptitiously like the “outrageous” idea, a bridge is crossed. The next and even more outrageous idea is accepted with alacrity until the outrageousness becomes its own justification.

Some of us longer-in-the-tooth South Africans know this from the apartheid era, when the National Party proposed the outrageous idea of “separate development”.

It has always struck me how National Party supporters were more akin to religious devotees than conscious supporters of a party platform.

So, this is all very depressing – except for one thing. The great thing about devotional leaders is that once the magic veil is lifted, they disappear into the mist.

People seem to awaken, as if from a dream, and discover their inner good sense. So when FW de Klerk announced that apartheid was over, the expected overthrow of the government by his own supporters never transpired.

Well, maybe. And maybe not. But the point is that we need to know more about how and why humans become devotional supporters of “big man” leaders – and how to lift the veil more effectively. BM/DM