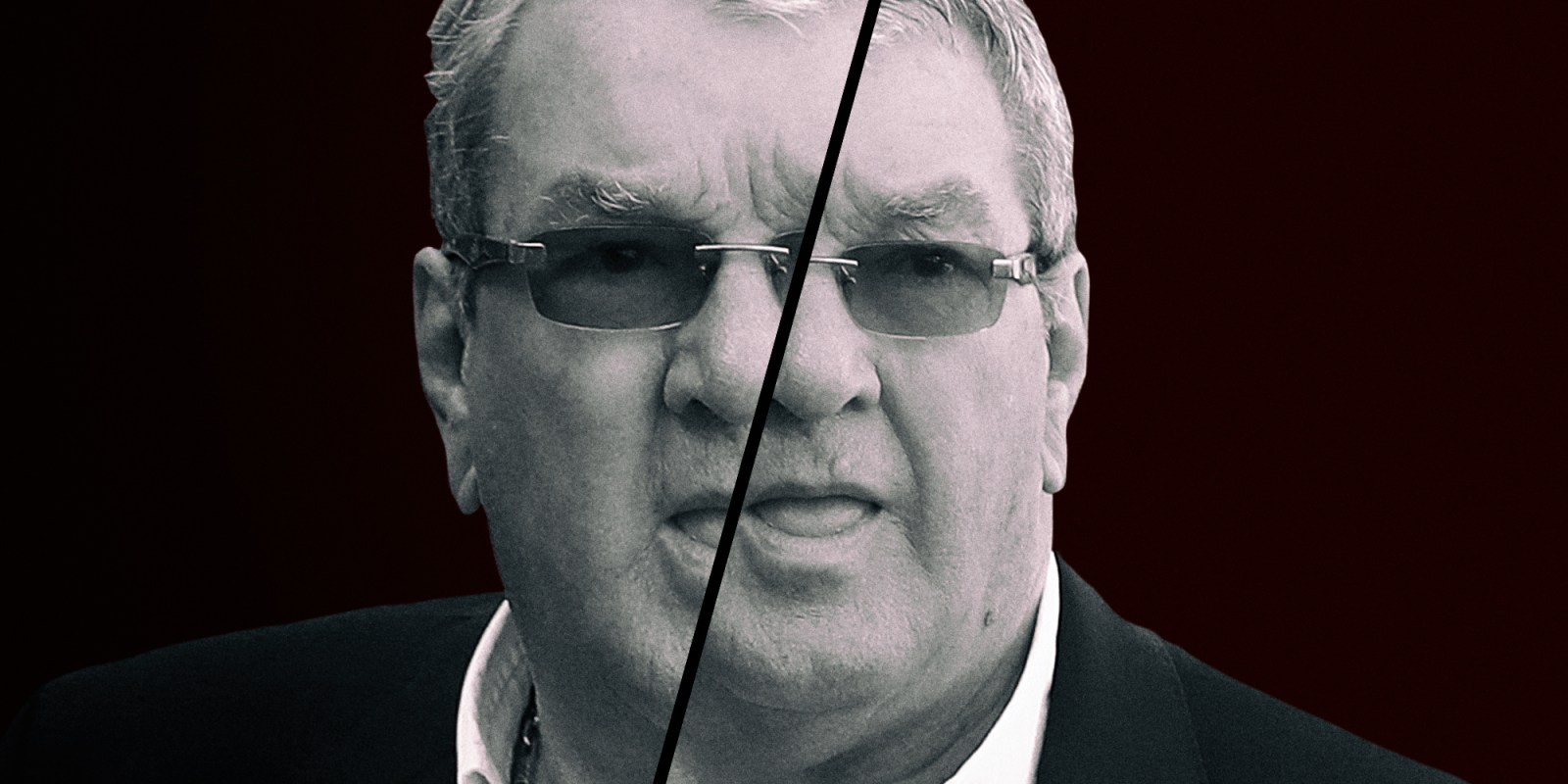 South Africa has finally done the right thing by rescinding the visa of Guus Kouwenhoven, a Dutch citizen convicted of aiding and abetting war crimes committed by Charles Taylor’s forces in Liberia and Guinea. It is now time for the Extractive Industries Transparency Initiative to do likewise.

It was revealed on 12 November that the Department of Home Affairs has cancelled the visa of Guus Kouwenhoven, a Dutch citizen sentenced to 19 years in jail in the Netherlands for aiding and abetting war crimes committed by Charles Taylor’s forces in Liberia and Guinea. Kouwenhoven, a notorious arms dealer and alleged sometime business partner of Taylor’s, has been declared an “undesirable person” by the department.

He was informed of the decision on 5 November. He has 10 days to make representations, after which he will become an illegal foreigner – and subjected to removal procedures, ending his luxurious way of life in Cape Town, where he owns a multimillion-rand Bantry Bay mansion and several expensive cars.

His highly paid legal team will no doubt attempt to ensure he remains in the country. The department must remain resolute and ensure South Africa no longer provides a haven for this odious fugitive from justice. How they granted a visa to a known convicted war criminal fleeing justice in the first place, is unclear and a cause for concern.

Equally baffling was a magistrate’s decision in February this year to stop Kouwenhoven’s extradition to the Netherlands, where he is due to start serving his jail term. The National Prosecuting Authority’s appeal on the extradition matter is due to be heard in early December. The Department of Home Affairs’ decision should make the success of this appeal a foregone conclusion.

It is hoped that the NPA will also seek to freeze Kouwenhoven’s assets in South Africa, sending an unequivocal message that, as a democratic state committed to the international rule of law, South Africa will not harbour those who have been found guilty of complicity in heinous war crimes, or fugitives from legitimate justice. The country’s reputation as a champion of global human rights is at stake.

South African civil society, in the form of the Southern African Litigation Centre which brought these cases and has run a relentless and courageous campaign against Kouwenhoven’s presence in the country, has stepped in where the government had so far failed. It is now up to the State to ensure we are rid of Kouwenhoven once and for all.

Elsewhere, civil society has not been as admirable in its approach to the arms dealer. The Oslo-based Extractive Industries Transparency Initiative (EITI), which describes itself as “the global standard for the good governance of oil, gas and mineral resources”, has had a representative of a Kouwenhoven logging company on its oversight body in the Republic of Congo (Brazzaville) since March 2019, despite understandable outrage.

To have the interests of a convicted accessory to war crimes – a fugitive from justice – represented on the stakeholder group of a body that exists to further good governance, raises cacophonous alarm bells.

Before his luxurious sojourn in South Africa, the kleptocracy run by President Denis Sassou Nguesso in the Republic of Congo welcomed Kouwenhoven with open arms in 2003. This was when, in violation of a UN Security Council travel ban, Kouwenhoven fled the ashes of Charles Taylor’s reign of terror in Liberia, from which the “businessman” had made fortunes from logging and arms dealing. Interpol calls the Bantry Bay fugitive a “friend” of Sassou. In 2005, Dutch media reported that his Pointe-Noire villa neighboured the dictator’s.

The Sassou regime awarded him his first, massive logging concession in 2004. At the time, the other shareholder of his firm SIPAM was soon-to-be Public Works Minister, Emile Ouosso. When, in 2016, he gained an even larger concession – bringing the forest under his control to an area the size of some 200,000 football fields – SIPAM had become a wholly Kouwenhoven-owned entity.

The global NGO transparency initiative didn’t bat an eyelid last March when Congo’s Finance Minister appointed the local manager of SIPAM to the “multi-stakeholder group” in charge of overseeing EITI operations in the country.

Negligence in such matters comes naturally to the initiative. Although the non-profit claims to be the global standard of good governance on natural resources, many of the world’s most brutal kleptocracies may well see it as an invaluable image-laundering tool. Of the 22 African countries it’s “assessed”, all have made either “meaningful” or “satisfactory” progress – only one, the Central African Republic, is currently suspended, “due to political instability”.

Such marvels of openness and good governance as the Democratic Republic of Congo, Chad, Cameroon or Sassou’s Republic of the Congo (Brazzaville) – and especially the multinational mafias that plunder them – know they can count on the NGO for lauding baby steps and window dressing. This is perhaps unsurprising given that, in 2019, 34% of the EITI Secretariat’s $6.8-million budget came from oil and mining firms.

The way that EITI has dealt with the Kouwenhoven issue has been as slow and laboured as the South African government’s reaction to his gilded presence in the country.

Alerted on 3 April that Kouwenhoven’s man was a member of its Congolese oversight group, EITI’s initial reaction – for six months – was to do nothing.

To be sure, the executive director promptly outlined for us the relevant grievance procedures, noting that “any member of the [multi-stakeholder group] has the right to table an issue for discussion”. A relief, one imagines, for the group’s civil society members, no doubt eager to “table” the issue of Kouwenhoven while looking down the barrel of an AK-47. A follow-up request about whether the EITI board had brought the matter to the attention of the group was met with silence.

Not only did EITI find that “the Republic of Congo’s performance in implementing EITI requirements [since 2018] has improved markedly” but it specifically noted “improvements” in the procedure for naming members to the multi-stakeholder group. For the EITI, an oversight group with a member linked to one of the most notorious war criminals on Earth, a fugitive from justice, “includes relevant actors with adequate representation of key stakeholders”.

On 24 September, having heard from the authors on this again, EITI suggested a Zoom call “to better understand your concern”. But what’s not to understand? It’s above all to this question that EITI Congo Brazzaville’s national coordinator, Michel Okoko, failed to respond during our online meeting on 5 October. Described recently by La Lettre du Continent as “Sassou’s secret weapon to win over the IMF,” Okoko has spent the past seventeen years as an adviser to the Economy Ministry.

Not only does he claim not to know Kouwenhoven, he swears that before our alert to EITI he had never even heard of him. This is bizarre, given that Kouwenhoven is identified as sole owner of SIPAM in a 2019 document on the Finance Ministry website and that he often appeared on state television and other Congolese media. While meeting with Kouwenhoven for a 2019 media profile, the writer recorded that during the interview “every now and then a [Republic of Congo] minister calls”.

The EITI Secretariat promised to recommend SIPAM’s removal from the multi-stakeholder group – only if the necessary documentation could be found proving a connection with Kouwenhoven. Okoko says he’s learned from SIPAM that the convicted war criminal no longer owns it. However, in giving the regime its hearty thumbs-up last September, EITI took pains to specify that beneficial ownership of “licenses and contracts” was an area in which progress was “only encouraged or recommended and should not be taken into account in assessing compliance”.

South Africa has finally done the right thing. It is now time for the EITI to do likewise. Otherwise it is most likely that once he has exhausted legal challenges to his removal from South Africa, Guus Kouwenhoven will land up once again in the Republic of Congo, rather than in a jail cell in the Netherlands, where he belongs.

[Andrew Feinstein is a former ANC MP, the author of ‘The Shadow World: Inside the Global Arms Trade’ and Executive Director of Shadow World Investigations; Arnaud Labrousse is the pen name of an independent researcher specialising in logging and the neopatrimonial state in Central Africa]