The magic and meaning of Dolly Rathebe 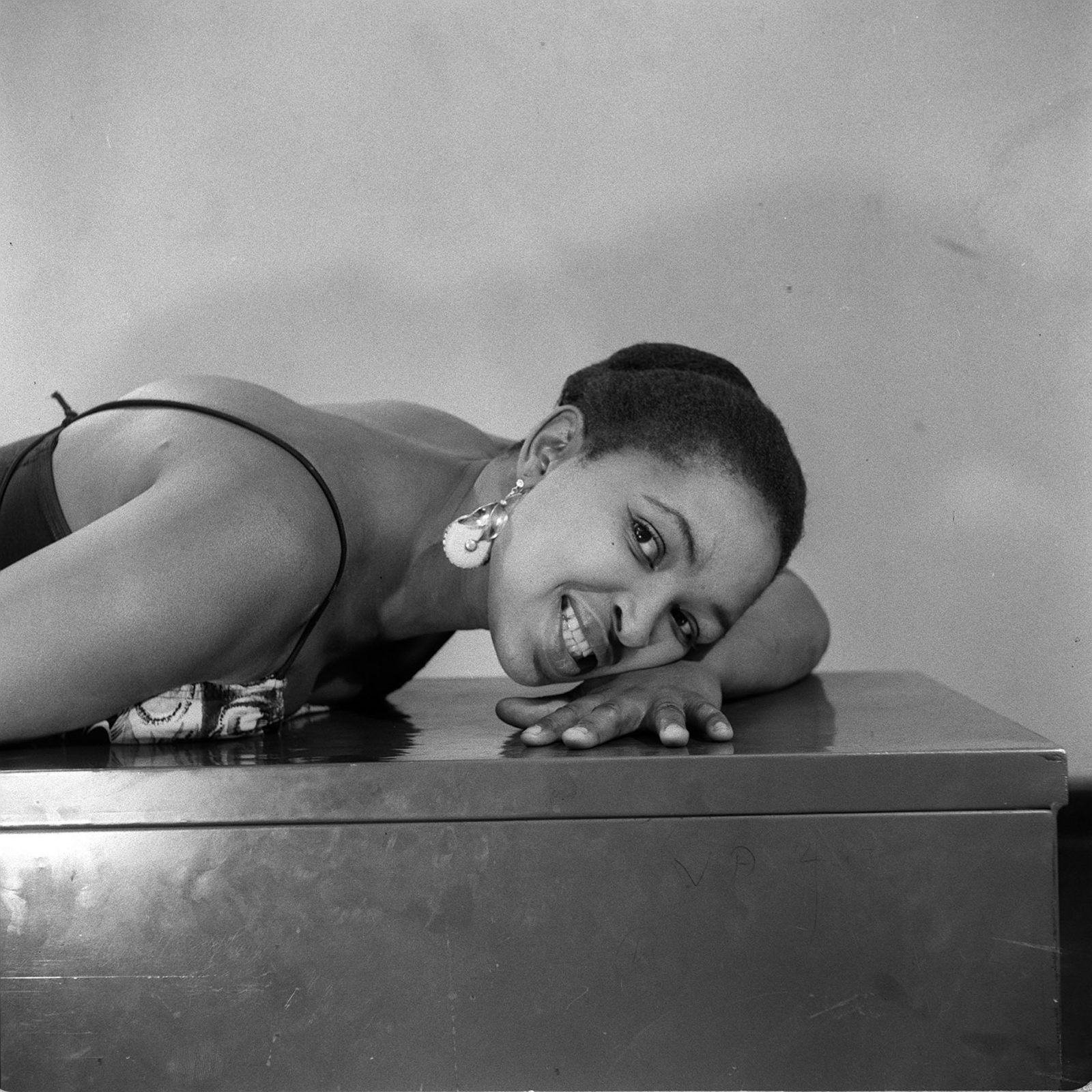 Circa 1957: Dolly Rathebe exuded a beauty and glamour that led to her name becoming shorthand for everything that’s delightful. People would say ‘Everything’s Dolly’ or ‘Double Dolly’.

Despite being a pioneer of the film and music industry, her career output lacks a proper archive, reflecting the difficulties of life as a black performance artist during apartheid.

Born in Randfontein in 1928, Dolly Rathebe would emerge as a pioneer of the black entertainment industry in South Africa and a central figure in the Sophiatown renaissance of the 1950s. Rathebe was the first black woman film star and the first to grace the covers of magazines targeted at a black audience, such as Zonk! African People’s Pictorial.

In a collision of time and place, Zonk! was founded in 1949, the same year that Jim Comes to Joburg (or African Jim), starring Rathebe, premiered. Can Themba’s elegant pen recorded the meaning of both this historic moment and Rathebe’s appearance, writing of a “black South Africa thrilled at the idea that black faces, black background, could appear on screen. Over a night show the name of Dolly Rathebe flashed across the countryside. Imagine it! A black girl of Johannesburg appeared on the big posters, hoardings and placards of blinking cinema fronts. And in the film, they say when she sings, she sings like the low humming of a slow-moving river.

“Even people who normally thought that the bioscope was not quite the place where decent people went for entertainment, they went in their thousands to see Dolly Rathebe in Jim Comes to Joburg. So-and-so in Such-and-Such! It sounded as if Africa was being transported into the fascinating world of Hollywood.”

Rathebe was more than just a star. Her appearance and work were inventing a world in which black people could see themselves reflected as glamorous and far removed from the shells of human beings they were constructed as by the apartheid project. There is no doubt that, although black people were very aware of their dignity, the shift in the then untilled landscape of creatively representing this on screen was an important marker for an audience that was looking for entertainment outside of what was force-fed by the state through the native affairs department.

The film itself did not contain a nuanced and interesting story line. However, there are certain subversive elements that snuck in, such as the opening scene in which workers sing a song mocking their white boss, who is overseeing their picking and shovelling. This wasn’t a performed scene, but real-life footage of black men at work. While this obviously went over the heads of the film’s creators, it must have been a welcome moment for an audience with intimate experience of oppressive working life in the city.

The South African film industry is traceable to 10 April 1913, when Isidore Schlesinger formed the African Theatres Trust. Although the kinetoscope was already on South African shores as far back as 1895, full-length feature films would only be born when Schlesinger established his company. Also in 1913, the Natives Land Act became law and a mere 7% of arable land was allocated to black people. By 1936, this would increase to 13%, but that was years in the making.

The Asiatic Bazaar Law, the Glen Grey Act and the Locations Act of 1885, 1894 and 1903 respectively, turned the wheels of land dispossession and cleared the path for white people like Hermann Tobiansky to buy large tracts of farmland as more black people were pushed into reserves. Tobiansky named his farm after his wife, Sophia. As urban centres, specifically Johannesburg, developed thanks to the gold rush of the late 19th century, Tobiansky obtained freehold rights to turn his farm into a white residential area, Sophiatown.

But, as scholar Lara Allen writes, the land’s proximity to municipal sewerage works made it undesirable for a white consumer, making way for black people to settle there and making Sophiatown one of the few places in the city where they owned title deeds.

Sophiatown grew into a cultural and political hub. The Bantu Men’s Social Centre, where the ANC Youth League was formed in 1944, hosted talent shows and jazz performances. But these weren’t documented. Although the entertainment industry had been well established by then, it was for the exclusive benefit of a white audience. Schlesinger’s company, which owned the bulk of entertainment magazines, enjoyed a monopoly on the cultural commentary of this landscape. As for black audiences, “edutainment” programmes were carefully curated by the state as a propaganda tool that attempted to induce black people to accept a state of docility, while stripping them further of their right to exist as full human beings in the land of their birth. The only exception to this was In the Land of the Zulu, produced in 1930 and the first full-length film targeting black audiences. Though it fell outside the scope of the native affairs department, it was nevertheless told through the colonial gaze.

Two British men, director Donald Swanson and producer Eric Rutherford, visited Johannesburg in 1948 from what was then Southern Rhodesia, where they had produced several children’s films through the production company Warrior Films. They scouted the city in search of a star comparable to the jazz, film and pinup icon Lena Horne, and found her singing at a picnic one Sunday afternoon. She was the 19-year-old Josephine Malatsi, who went by the moniker Dolly Rathebe.

The success of Jim Comes to Joburg, which Donald Swanson directed, led to the creation of three more films. Among these was Swanson’s fairy tale The Pennywhistle Blues, later renamed The Magic Garden, in which Rathebe starred in a supporting role. The films also launched the careers of Ribbon Dlamini and Mabel Magada, though not as stratospherically as Rathebe’s.

As her career took off, her image and talent were in high demand. She became the first brand ambassador for Max cigarettes. She fronted bands like The African Inkspots and the Harlem Swingsters, capturing the hearts of bar audiences. Her first cover for Drum magazine was shot by Jürgen Schadeburg on an old mine dump and ended with both being arrested under the Immorality Act – it was assumed that the two were in a relationship and not actually working. This moment, among the many realities of being black in South Africa then, was a factor that had great bearing on the kind of entertainer Rathebe and her contemporaries were.

The Group Areas Act of 1950 would render Sophiatown vulnerable to its inevitable destruction five years later, making it difficult for Rathebe to work. While she is recognised as one of the superstars of the era, there is little serious meditation on just how important this first lady of song was to South African entertainment history. As a composer, Rathebe’s song Mbombela was covered by Miriam Makeba and Harry Belafonte and it is included in their Grammy Award-winning album, An Evening with Belafonte/Makeba (1965).

Rathebe struggled to find work as a performer as the apartheid regime became increasingly brutal and repressive. Unlike many of her counterparts, she chose not to live in exile, and for that she paid a heavy price as her fame dwindled. There has been great care to reflect on the works of Sophiatown writers such as Themba, perhaps because they exist in tangible forms and are archived. Rathebe only released an album in 1992 with the Elite Swingsters, their first recorded body of work even though the band had been formed in 1958. There is shockingly little recorded music in the era in which Rathebe was at the zenith of her superstardom. However, the little we do have confirms why she was so loved.

Unlike the voices of Makeba and Dorothy Masuka (the latter was touted as the heir to Rathebe), hers was a sultry alto. Rathebe’s velvety vocals glide through the middle-register notes decorating the key signature of her choice with style and grace. Her technique swings with the horn section in a song and dance that sealed the merger between jazz and marabi. It was the perfect soundtrack to jive on or dance tsaba-tsaba style.

Cover icon: from image to language

Her impact as a cover girl blazed a trail on which Makeba, Winnie Madikizela-Mandela and others who graced the cover of Drum walked. One of her iconic covers was shot in Durban by Bob Gosani while on the Jazz Train tour. Her beauty and glamour led to her name becoming shorthand for all things delightful, giving birth to the terms “It’s Dolly” and “Double Dolly”.

Rathebe’s images are part of the iconography of the Sophiatown era. She is the star that birthed a kind of black superstardom way before the contemporary culture of celebrity. While she disappeared from the spotlight, forced by the circumstances brought on by the state of emergency in the aftermath of the Sharpeville and Langa massacres in 1960, she emerged in the late 1980s and resumed her work, starring in the film Mapantsula and later in the 1995 remake of Cry, the Beloved Country.

While these films were political, and while Rathebe herself contributed to the upliftment of black people through her community activism, it is also of value to imagine her in her fullness. She was a superstar who helped usher in an era of art for entertainment’s sake. There is something to be said about the vibrance of Sophiatown and its music scene as not just escapism from the difficulties of black life. This is often achievable in the ways we remember the work of the likes of Themba and Nat Nakasa, who contributed immensely to the literary landscape as journalists and short story writers.

Rathebe preceded the “black is beautiful” era ushered in by the black consciousness movement in 1970s South Africa. She simply owned this for herself and constructed beauty on her own terms, defining the South African “it girl” image while creating timeless music that is part of the South African jazz songbook. DM/ ML