SAA whistle-blowers: ‘We want to see people being charged – then we will feel vindication’ 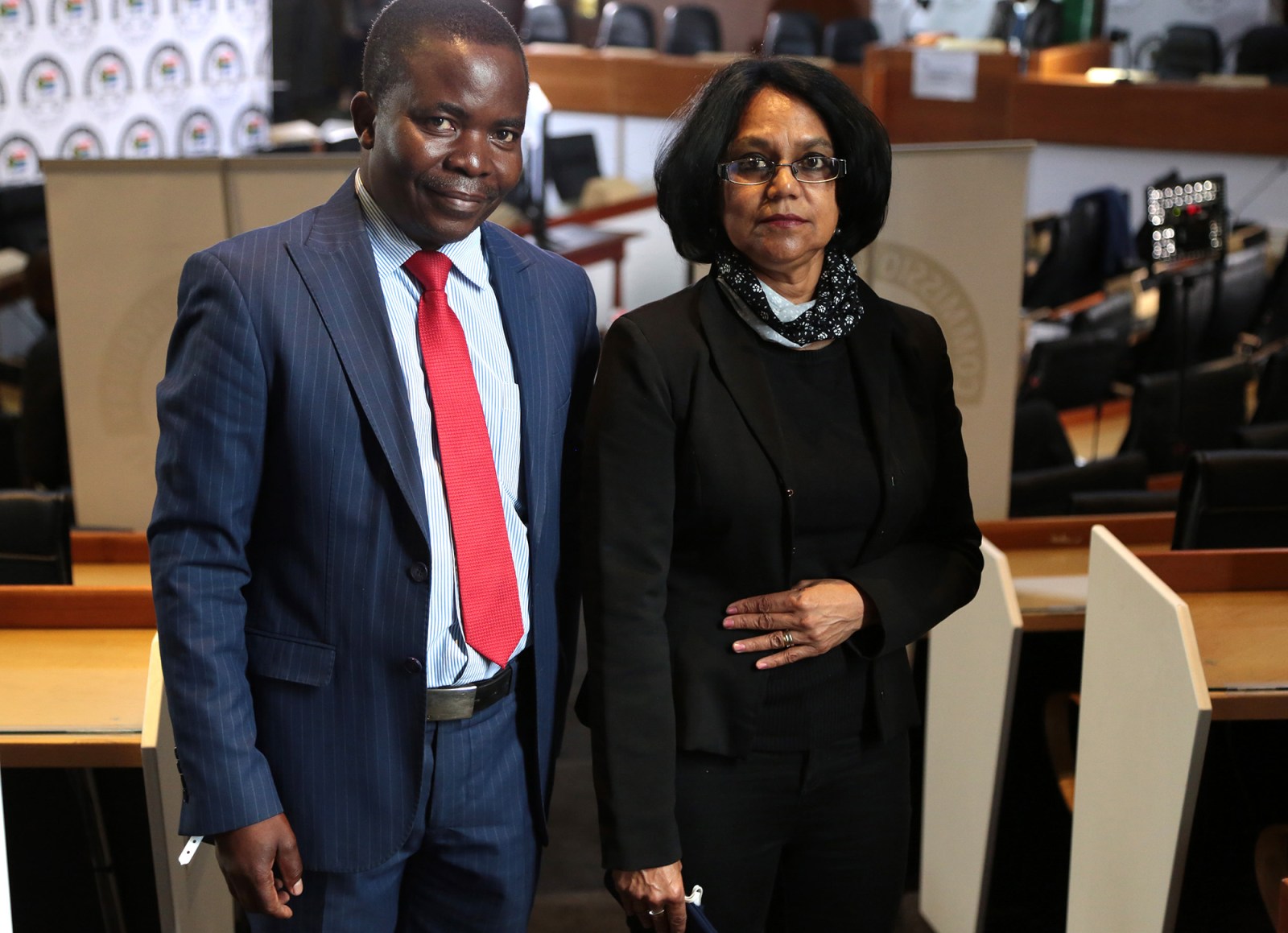 South African Airways’ whistle-blowers Cynthia Stimpel and Dr Masimba Dahwa were at the Zondo Commission last week to witness former SAA chairperson Dudu Myeni and ex-board member Yakhe Kwinana being called to account. Five years on, the airline’s former group treasurer and head of procurement are still trying to pick up the pieces. As they listened to the two women who destroyed their careers, what was their reaction?

“I wanted to do a passive protest when I saw that Ms Myeni and Miss Kwinana were going to be on at the Zondo,” she told Daily Maverick.

“I thought that every time they lie or say something that contravenes what their duties were as directors, I would put up a sign. Unfortunately, we can’t do it in Zondo so I am holding them up here.

“They have shown no integrity as directors, no duty of care, no diligence,” the former group treasurer said.

“It brought very fresh memories of how she forced me out of South African Airways. They had to get three external lawyers – I think two of them were advocates coming from Sandton, driving these big cars, big salaries and everything… just to fire somebody who didn’t do anything wrong.

“I was unprotected; I didn’t even have a single lawyer. It brought back some terrible memories of how Ms Myeni treated me… three senior lawyers and I just wanted to speak the truth.”

Stimpel was given a six-month salary settlement by SAA in 2016 after preventing a corrupt deal which would have given Myeni and her associates R250-million.

Dahwa was suspended at the end of 2015 for refusing to follow Myeni’s instructions to set aside 30% of a procurement budget for select companies and illegally awarding a R1.5-billion contract to  Swissport and its BEE partner.

Both whistle-blowers, who testified before the Zondo Commission in June 2019, have been unable to find jobs since leaving SAA.

Dahwa, who has specialist skills in his field and is a fellow of the global professional body, the Chartered Institute of Procurement and Supply, said: “I have worked all over the world… I have never lost a job. I have never been dismissed.

“I have always held leading positions and have never been fired for any irregularities. The trauma doesn’t go away. We are still suffering.”

Stimpel, whose story will be published by Tafelberg in 2021, said she had to constantly revisit the trauma while writing her book.

“I don’t think one ever gets over it. It affects you unexpectedly. For Masimba, seeing Ms Myeni’s three lawyers reminded him of the past.

“My question is: how can she afford it when she has no money?

“You can imagine somebody still having the luxury to bring three lawyers to the Zondo Commission. I can’t afford a meal. At the moment I can’t even look after my own children,” Dahwa added.

“If only they could say: ‘In hindsight, after reflection, what we did was bad.’ ”

A Seventh-day Adventist, Dahwa likened the moment when he received a call from the Zondo Commission – four years after his dismissal – to the parable of Jesus raising Lazarus from the dead.

Stimpel, a Catholic, says she has also been sustained by her faith. She went on a 40-day pilgrimage on the Camino de Santiago before deciding what action to take following her dismissal.

Kwinana disputed Dahwa’s testimony before the Zondo Commission and denied attending a meeting in which, according to Dahwa, Kwinana and Myeni threatened him and told him that the EFF would protest for him and other ‘foreigners’ to be removed if he did not acquiesce to their demands.

“I don’t know how she (Kwinana) relates to the locals, but she has this hate for people of other nationalities.

“As a leader, you serve the interests of the nation, not your personal interests. I was not her servant, but that is how she treated me.

“Even when I refused to do things and said, my conscience doesn’t allow me to do this, it was because I was looking at the implications of my behaviour for the whole of society… I was working for South Africa,” he said.

Kwinana was questioned about a malicious letter she had written, alleging that Dahwa was conspiring against the SAA board and was “part of a sinister retrogressive agenda” intent on obstructing government’s plans for transformation.

Stimpel and Dahwa, together with other whistle-blowers, are in the early stages of founding an organisation to assist and support whistle-blowers, who they believe are going to be needed more than ever in the future.

Dahwa (a Zimbabwean) “does not share the agony of the people of South Africa”, Kwinana wrote.

Judge Zondo challenged her: “This is a person from Zimbabwe… This is an African person that you are talking about, Ms Kwinana.

“While you are trying to empower economically black people in South Africa, you are saying he is doing his best to keep African people in economic bondage?”

Stimpel told Daily Maverick: “I think Ms Kwinana was put in there for a purpose. She is a chartered accountant and owns her own company, playing in the space of financial accounting.

“She should have had more of an understanding of her fiduciary duties as a director, but she didn’t.

“I feel she was put there for a clear purpose of misappropriating funds. And the same with Ms Myeni… I have no doubt.”

When her turn came, Myeni said: “I prefer not to answer this question. Because my focus is dealing with poverty, inequality and all the other problems facing me as a woman leader.”

During her testimony, she deliberately revealed the identity of a protected witness and repeatedly declined to answer questions, claiming the right not to incriminate herself. She has argued that a false narrative has been created that certain leaders are corrupt.

“Where is the Ubuntu… where is this blackness that they so much like to talk about,” Dahwa said.

“I am black and she did not empower me. I would like her to pause for a moment and think about what she has done to me, to my children, to my grandchildren, to my parents…”

Stimpel says the Zondo Commission has raised awareness among the public of the extent of government corruption, especially since the Covid-19 lockdown.

“People are at home and they are watching. People are thinking now; why is there no money in our country? They want to know.

“There has been a change… For myself and Masimba and all the other whistle-blowers. It’s a good thing that (Kwinana and Myeni) are publicly putting themselves to shame.”

Stimpel and Dahwa, together with other whistle-blowers, are in the early stages of founding an organisation to assist and support whistle-blowers, who they believe are going to be needed more than ever in the future.

“If I go into a depression and it is exacerbated, I will end up needing psychiatric help if I can’t see a doctor because I haven’t got money. We are looking at a holistic way of helping whistle-blowers,” she said.

Do the two whistle-blowers feel vindicated?

“Not yet,” Stimpel said. “We want to see people being charged… then we will feel vindication.

“They are standing there saying they acted in the best interests of the organisation. Blatant lying! I believe they need to be charged and once they are charged we will feel vindication, because right now we are the ones sitting at the back end.”

Dahwa quoted a Shona proverb: “Chisi hachiyeri musi wacharimwa”, which means: “Working in the fields on prohibited days may have no effect on the day the seeds are sown, but may cause serious consequences in future.”

“What goes around, comes around,” Stimpel said. DM168