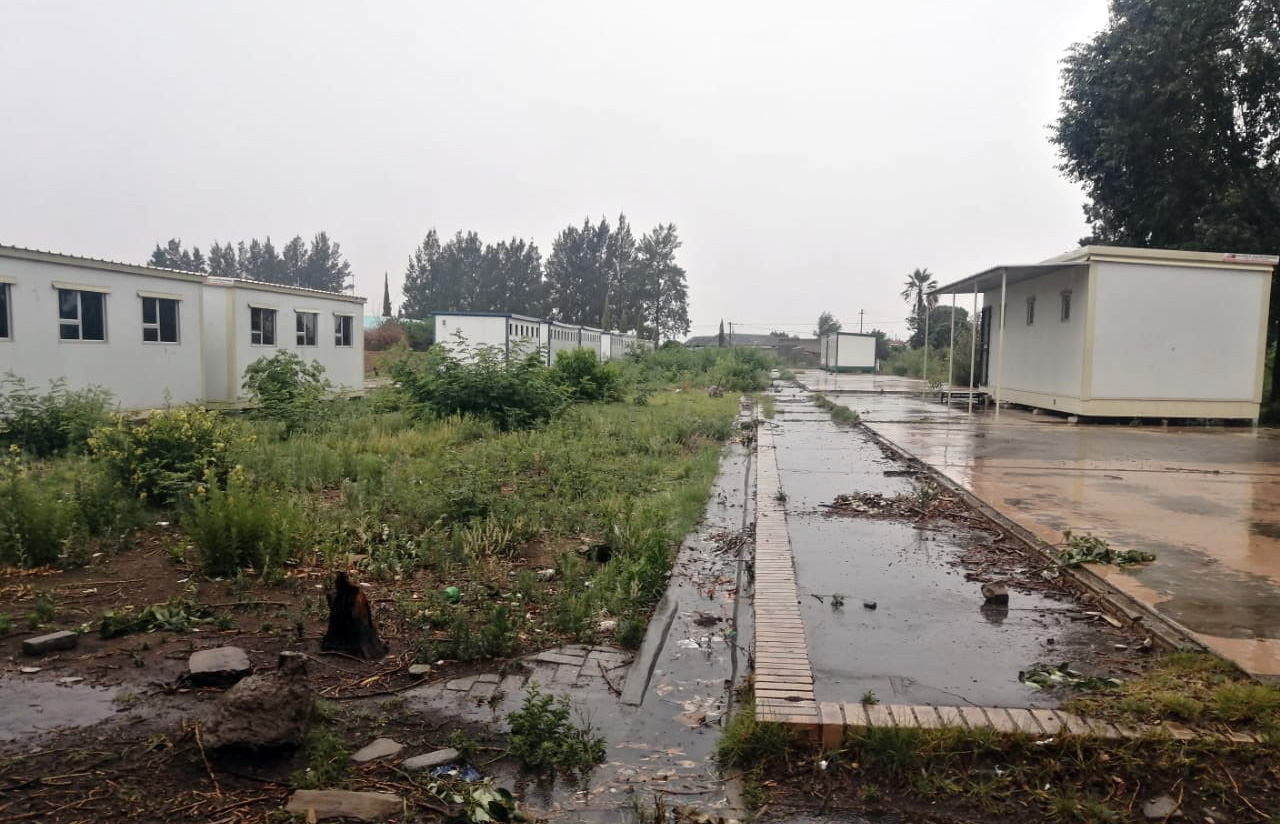 The current school is entirely made up of prefabricated classrooms that do not have electricity. (Photo supplied)

The community of Amelia, Zamdela in the Free State is demanding answers over a school construction project that was abandoned nearly two years ago by the contractor. The Department of Education in the province has spent more than R22m on the project with nothing except the foundation to show for it.

The construction of Katleho Mpumelelo New Secondary School should have been completed in 2019, but three years after the site was handed over to the contractors only the foundation has been laid.

“There are many school children, including my own child, who walk a long distance to get to school. There was a time when parents were happy that finally a school would be built closer to their homes,” said Pule Mphithi, a parent and member of the steering committee for the construction project.

The current school consists of dilapidated prefabricated classrooms that do not have electricity.

To get to the school, children have to cross a railway line while others cross a highway that was bustling with freight trucks during Daily Maverick’s visit.

On rainy days the dirt road in Amelia is difficult to navigate by car and much worse by foot, with mud puddles surrounding the entire track.

Community members say the contractor abandoned the construction site in late 2018 after digging and laying the foundation.

“Subcontractors did a majority of the work and many are still waiting for their payments from the main contractor,” Mphithi said.

When the community saw that the site had been abandoned, they sent numerous emails and letters to the Department of Education, which they say are yet to be replied to.

Records provided by the department to Daily Maverick show that R6-million was paid to the main contractor. Additionally, an exorbitant amount of just over R15-million was spent on a line item that the department labelled as “professional fees”. In total R22,701,895 has been spent on the project.

New Genesis Properties and Amadwala Trading 363 cc are the joint venture (JV) companies appointed by the Department of Public Works and Infrastructure (DPWI) in the province to construct the school.

The JV partners had an agreement with the DPWI to complete the school within 20 months of the handover of the site.

The last payment of R807,877 was made to the JV partners on 1 January 2020. This was despite the site having been abandoned for almost two years.

Nelson Mokoena, a community member from Zamdela and a member of the Congress of South African Students, told Daily Maverick that although the contractors seemed to have been the main instigators, the departments of education and public works have to answer for their complacency.

“We want to know where the R6-million was spent because there is no work done. When we met with one of the directors of the Department of Education, he did not have answers to the questions we had. He kept on repeating that they are just beneficiaries of the project,” Mokoena said.

Provincial education departments work with implementation agents, such as the DPWI to build schools.

The Free State DPWI is the implementing agent for this project while the department of education is the beneficiary. The education department handles all payments made to the contractors.

The department’s spokesperson, Howard Ndaba, said: “There were constant disagreements between the joint venture partners which resulted in their non-performance.”

Although the contract with the JV contractors has since been cancelled (on 5 November 2020), the community said they will be convinced that action is being taken once construction resumes.

Efforts to get hold of the JV contractors were unsuccessful. Melusi Mbhele, the director of New Genesis Properties, committed to having an interview with Daily Maverick but later would not return any calls.

During a meeting held with community members and other concerned stakeholders on Tuesday 10 November, Ernest Mohlahlo, head of the FS DPWI, could not say when construction would resume. He said the department had started the process to find a replacement contractor to take over the project.

A school construction site in the Free State abandoned by the contractor nearly two years ago. The department of education in the province tells me they’ve spent over R22-million on the project to date. This is what the construction site looked like today👇🏾 pic.twitter.com/5a4XdbCmcY

Questions sent to the FS DPWI were acknowledged, and the spokesperson, Mlungisi Maqubela, said the department would respond.

The project will cost the department more than R95-million, of which R75-million is reserved for construction and R21-million for “professional fees”. But with the delays, the costs are expected to increase. DM

Eastern Cape municipal failures: ‘We did not struggle for this’