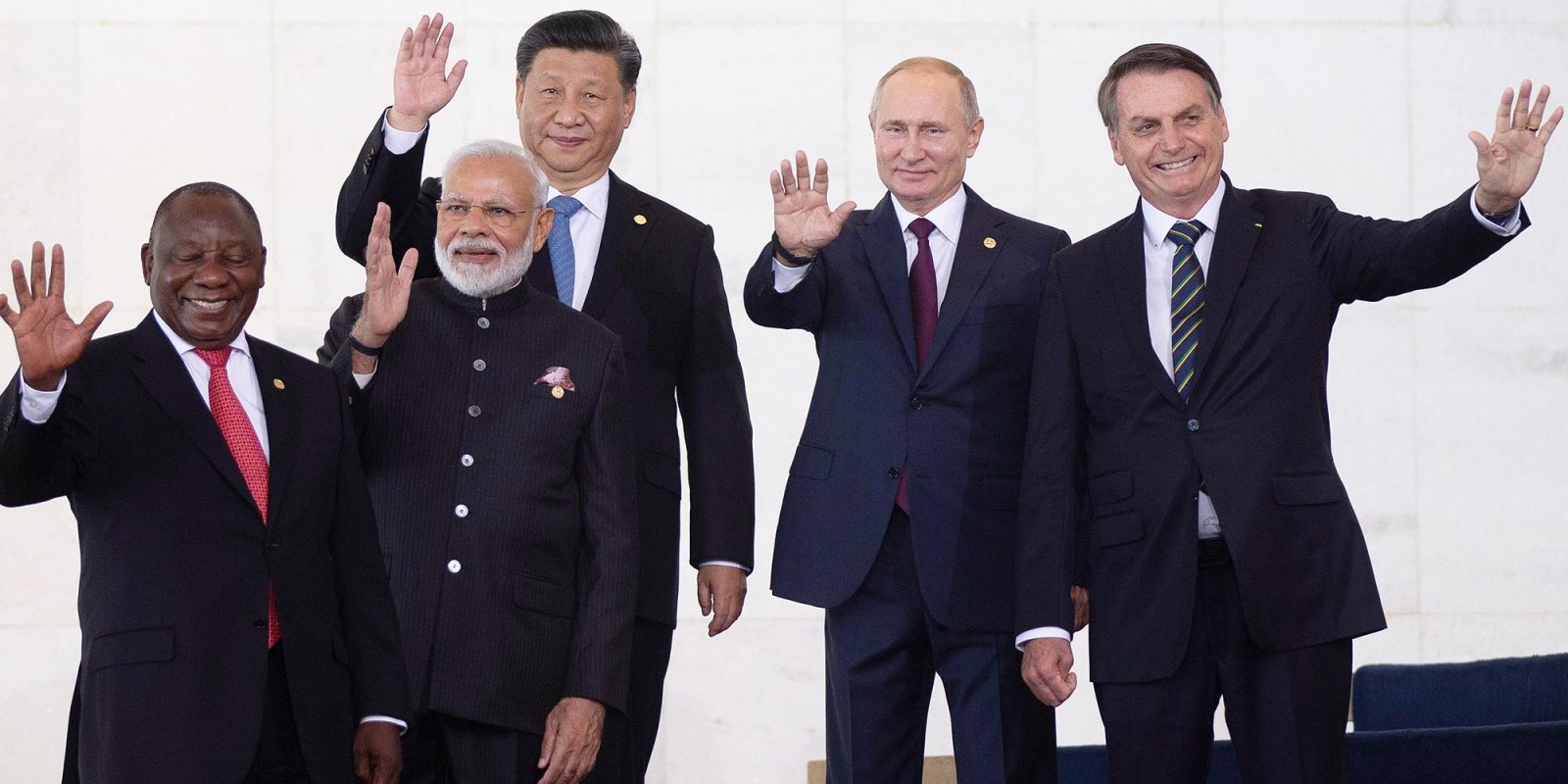 The BRICS grouping of nations looks increasingly like an uneasy mix and its virtual summit on 17 November will take place amid uncertainty over the US presidential election, the Covid-19 pandemic and tensions between member nations. There is also pressure for BRICS to expand its ranks to include other African, ASEAN and South American nations.

On 17 November 2020, Russia will chair the 12th BRICS Summit. The initial BRIC acronym was coined by Jim O’Neill from Goldman Sachs in his 2001 paper titled “Building Better Global Economic BRICs”. When South Africa joined the group, it was then rechristened BRICS.

With the passage of time, there has been debate about the relevance of BRICS. The upcoming summit bears the responsibility of responding positively, through sentiment and deeds, to some people’s misgivings about the group. The summit will be virtual because of the coronavirus pandemic. The theme will be “BRICS, a partnership for global stability, shared security and innovative growth”.

The summit takes place against a backdrop of two circumstances that are likely to reshape the world considerably: the coronavirus pandemic and the election of Joe Biden as president of the United States.

Within BRICS, there has been some subliminal and ideational tension; Brazil and India seem to have drifted towards the US in the past four years. The US under President Donald Trump represented a Western drift towards isolationism and antipathy to immigration. Brazil’s Jair Bolsanaro was in tandem with Trump on issues such as the environment, the UN Human Rights Council and China.

India, under Narendra Modi, shared Trump’s anti-Muslim sentiment; mutual visits to each other’s countries underscored the importance that the two leaders attach to each other. China and South Africa, on the other hand, have continued to champion the cause of multilateralism. Russia has had to deal with both internal and external challenges, such as the Syrian war and its alleged interference in American democracy.

All these circumstances make BRICS appear as an odd mix. The election of Biden is likely to revise America’s foreign policy position. However, certain positions, such as taking a strong stand on China, are likely to outlive Trump’s administration. For this reason, BRICS still has a role to play and has to consolidate its position by considering the inclusion of more members.

In Africa, Egypt and Nigeria seem to be fitting candidates, for a number of reasons ranging from their geographical position and economic and military strength. Outside Africa, one could consider Argentina, Mexico, Indonesia and Malaysia. By expanding its scope, BRICS could enjoy more influence and relevance at international forums such as the United Nations.

It is clear that the election of Trump in 2016 and the exit of the United Kingdom from the European Union betokened the rise of nationalism and insular politics in the West. A lack of synergy in the developing world could stymie growth and development. Western inward-looking politics should be met with multilateralism in the developing world. Institutions with potential such as BRICS should champion this by reviving organisations such as the G77 and the Non-Aligned Movement.

China and India, more specifically, have enormous potential to help the fortunes of the developing world and Covid-19 could display their prowess in dealing with global challenges, while less developed regions such as Africa have much to learn in terms of providing effective healthcare for their citizens. But while the Sino-Indian example could play a massive role in this regard, the two countries have to come to an amicable understanding on their border tension.

Another opportunity for BRICS is in the technological sphere, especially in rolling out 5G technology, and a general inclusion of Africans in internet networks. This could improve e-commerce on the continent and speed up remittances from the diaspora.

Improvements in technology will have a positive impact on agriculture, a sector that, if sufficiently supported, should be the mainstay of Africa’s economy. All these factors fall squarely within the “innovative growth” component of the upcoming summit’s theme.

The other component of the summit’s theme, talking about partnership and global stability, should mean that BRICS commits itself to furthering international cooperation on global issues such as climate change, technology and the threat of terrorism. However, as the saying goes, charity begins at home. For BRICS, this means creating a firm bond among the members so that they can mount a well-coordinated campaign against common challenges.

America might change its temperament under a Biden administration, and hence might leave the Trump-era volatility; however, its interest, expectedly, will be to hold on to its privileged place at the pinnacle of the international system. In effect, this means maintaining a watchful and wary eye on China and other countries that threaten more than half a century of American global dominance. Participants at the summit should be cognisant of this fact. Candour will be very important on the divisive issues confronting BRICS members, especially among themselves.

It is also hoped that by the time the summit is held, there will be certainty on America’s election, and some headway regarding the search for a coronavirus vaccine. DM

Dr David Monyae is the Director of the Centre for Africa – China Studies at the University of Johannesburg. Monyae co-edited the forthcoming Palgrave Macmillan book with Bhaso Ndzendze titled: “The BRICS Order: Assertive or Complementing the West?” Dr Emmanuel Matambo is the senior researcher at the same institute.