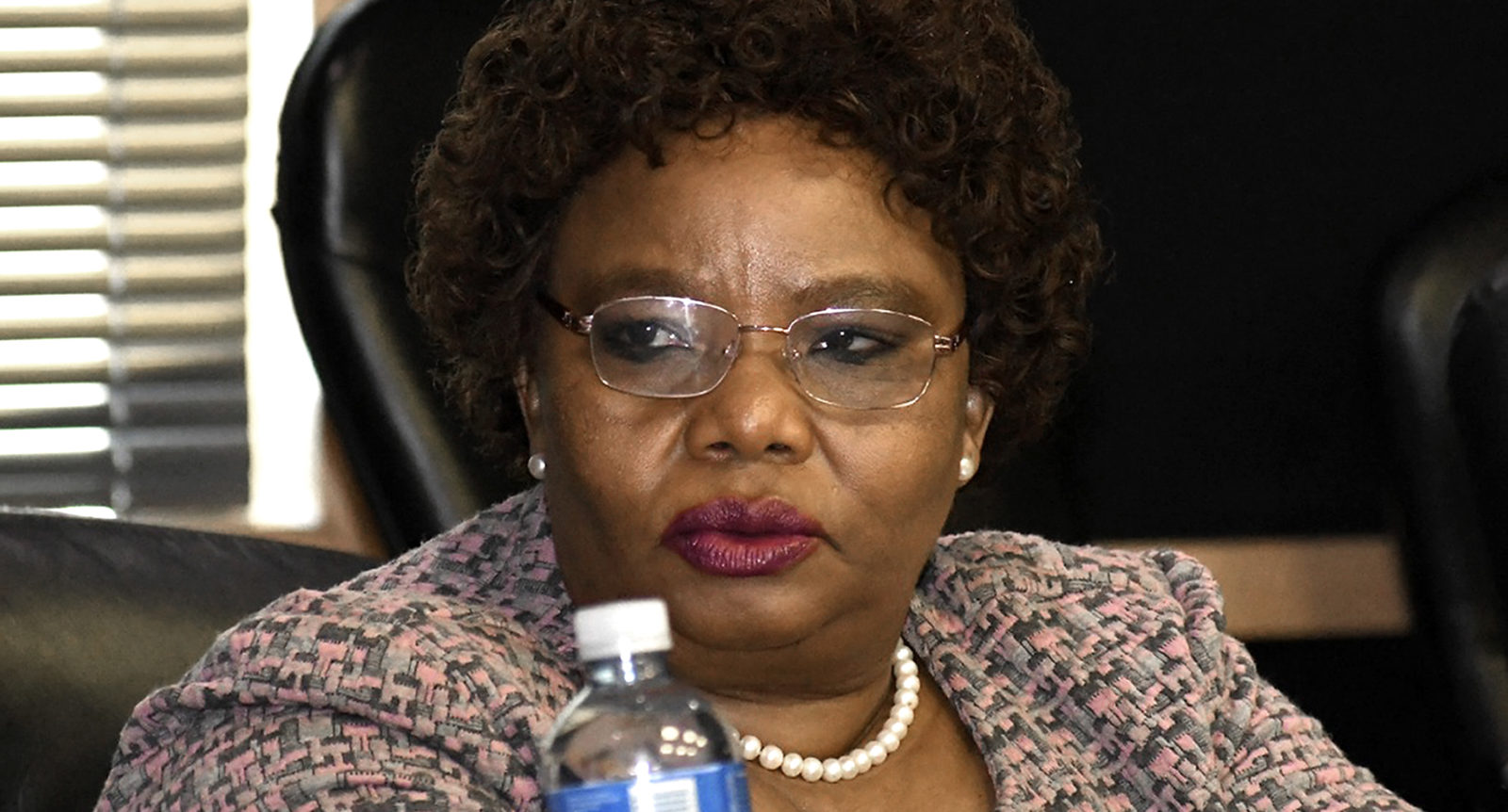 The head of the Eastern Cape Department of Social Development, Ntombi Baart, has been placed on two months’ precautionary suspension pending an investigation, the Office of Premier Oscar Mabuyane confirmed on Tuesday.

The head of the Eastern Cape Department of Social Development, Ntombi Baart, has been placed on two months’ precautionary suspension on the eve of an application for a contempt of court order to be made against her and the MEC for Social Development, Siphokazi Mani-Lusithi. This comes after several organisations in the province had, since April, not received their subsidies for looking after the elderly.

“I am not convinced that your continued presence in the office will not hinder the investigation,” a letter addressed to Baart and signed by Premier Oscar Mabuyane states.

“More specifically, the MEC alleged certain administrative deficiencies on the part of the Head of Department, and this was a subject of the meeting convened by myself [and] attended by yourself and the MEC,” the letter continued.

“The meeting was convened in an attempt to ameliorate the grievances and issues in dispute as raised by both the MEC and yourself… I even solicited the support of the Public Service Commission to no avail,” Mabuyane wrote.

Mabuyane’s spokesperson, Mvusi Sicwetsha, confirmed Baart’s suspension and added that Deputy Director-General Mzimkhulu Machemba had been seconded to act as the head of the department. He would not elaborate on the reasons for Baart’s suspension or what “issues” there were between her and the MEC.

On Thursday the Imbumba Association for the Aged will approach the Makhanda High Court to ask for a contempt of court order against both Mani-Lusithi and Baart for failing to adhere to a court order to pay out just over R1-million in subsidies to organisations in the province caring for the elderly. According to the court order, these payments had to be made by 15 October.

Melumzi Hubert Sauka, the vice-chairperson of Imbumba, said organisations were either not paid or bullied into signing a new contract, resulting in them being paid a significantly reduced amount.

“Time was running out for our beneficiaries, all elderly people,” he added.

In October the Makhanda High Court ordered the Eastern Cape Department of Social Development to honour service-level agreements with 25 caregiver organisations looking after the elderly in the province.

In her ruling, Judge Judith Roberson said the Eastern Cape had no provision for home-based care and that the provincial Department of Social Development had not provided any proof that it had supplied food parcels to the elderly during the lockdown.

In papers before the court, Baart said that paying for the services rendered to the elderly would amount to “irregular and wasteful expenditure” as providing these services would have broken lockdown regulations.

Imbumba Association for the Aged, a group of 25 caregiver organisations operating service centres in the former Transkei and Ciskei homelands, asked the court to overturn this decision.

Sauka said the caregivers at Imbumba’s member organisations had decided to continue their assistance to the elderly at their homes during lockdown by providing two meals a day, helping with cleaning homes and doing laundry, fetching medication from clinics, buying groceries, basic essentials and linen and nappies where necessary, and bathing and washing those unable to do this themselves.

“The lockdown did not do away with older persons’ need of care,” he said. “It also did not suddenly have other adults materialise to undertake this work.”

In her ruling, Judge Judith Roberson said the Eastern Cape had no provision for home-based care and that the provincial Department of Social Development had not provided any proof that it had supplied food parcels to the elderly during the lockdown.

She had some harsh words for the department’s legal team, which asked for Imbumba’s case to be dismissed as it “wasn’t urgent”.

“It was vexatious and futile [to do so] when one is dealing with the welfare of people in need during a life-threatening pandemic,” she said.

“One would not expect it to be raised by an organ of state-mandated to provide social services. They may be able to live independently, but they still rely on the support provided by [Imbumba], including food and emotional support. These are services which not only assist the beneficiaries to survive but also to survive with dignity,” Roberson wrote in her judgment.

She added that when organisations had approached the department to ask for guidance and advice they were not given a meaningful response, but were met with a unilateral decision to reduce funding, knowing well that there was no budget for home-based care.

Advocate Ori Ben-zeev, in an affidavit supporting the urgency of the contempt of court application, confirmed that the department had not paid, and was therefore in contempt of the court order.

“Instead of complying with the court order, the [department], through their officials and employees, [has] pressured Imbumba’s members to sign addendums to the service-level agreements that would materially change the terms of the agreements and significantly reduce the amounts payable,” he explained.

“Imbumba’s members are [in] a vulnerable position because they are dependent on the subsidies paid by the department. Only two were paid by 31 October as they signed the contracts allowing for reduced payments.”

He added that the failure by the department to pay was causing ongoing prejudice to the many elderly people residing in poor, rural areas of the Eastern Cape serviced by Imbumba’s members.

Sauka said that shortly after the court handed down the order, the state attorney raised concerns that it would take the department 30 days to pay but also asked that the necessary supporting documentation be filed.

He said their member organisations had been ready to submit their claims by 8 October.

“I informed a department official in Buffalo City [East London] that our members would be submitting their forms the next day. She indicated that they have not been informed about the claims that we would submit and indicated that as a result she would find it very difficult to accept our claims.

“At the Middledrift office in the Amathole District, our members were met with further resistance from department officials. At that office an official took it upon herself to communicate with the chairpersons of the boards of our member organisations to compel them to sign addendums to the service level agreements,” he said.

Sauka explained that the new documentation significantly reduced the amount owing to the organisations represented by Imbumba.

“The official warned the organisations that if they did not sign the revised service level agreements, the department will not give them funding again. I alerted my attorney to these threats by email on 5 October.

“Given that these threats were made after the court order was handed down, the officials’ conduct was in breach of the court order. It demonstrates a clear intention to breach the court order and therefore constitutes an act of contempt in itself.”

He said that seven organisations had been bullied into signing the revised agreements and to settle for significantly less money than the amounts owing to them. Imbumba is asking the court to declare these addendums invalid.

“When the managers at these centres objected to signing on [the] grounds of the court order issued in their favour, the officials at that office indicated that the court judgment had not been brought to their [attention]. This is false,” he said.

Following the judgment, the state attorney asked for four more weeks to comply with it and insisted on proof of expenses incurred. After that, the department demanded a compliance audit. This was completed, but still no payments were made.

According to a notice filed on behalf of Mani-Lusithi and Baart, the department “was working hard” to pay the subsidies to all the organisations involved, except for three who, according to the department, had “refused” to file affidavits.

The notice further stated that the department had cleared up the confusion about the addendums.

“It was not intentional, it was a result of a misunderstanding on the part of the officials on the ground,” the Office of the State Attorney wrote. DM/MC